I’ve been wondering lately whether we’re moving toward two very different racial tipping points, both at the same time.

Tipping Point Number One:  Not Your Mother’s Civil Rights Movement

A student asked me after class Wednesday where I thought the most racial progress is being made today.  Interesting question!  I told him that the post-Ferguson coming-togethers, loosely organized under the Black Lives Matter hashtag, have the potential to create meaningful, significant progress.  It’s a large, distributed network of mostly young, mostly Black people all over the country helping us think about what it would mean if Black lives really did matter to us.  There is energy, interest, and vision, as well as thoughtful discussion of ends and means that has the potential to reshape how the nation conceives of racism and, therefore, how we go about ending it.

The #BLM folk are on all kinds of social media, where they share all kinds of insight into how their lives, and the lives of so many others, have been shaped by historical and contemporary discrimination.  They are talking about law enforcement, to be sure, but also about the school-to-prison pipeline, housing, education, and the intersection between race and gender, sexuality, and other important identities.  I have never witnessed a national conversation on race with this kind of authenticity, this kind of focus on the things that really matter.  Their analysis of race is spot-on, their response to opposition brilliant, and their ideas about action are taking focus.

I have hope that these bright, committed people will help more of us see how race really works in this country.  The Black History Month Story is a ruse, and because of #BlackLivesMatter, more people understand that now than ever before.

Tipping Point Number Two:  Lord have mercy on us all

At the same time . . . when was the last time you saw this much overt bigotry coming so fast from so many quarters—especially from people who are, or who aim to be, significant national leaders?

Donald Trump, Ben Carson, and Jeb Bush, to start with, and little or no push-back from the other candidates.  David Brooks, Charles Krauthammer, and loads of other Republicans have had enough, but it doesn’t seem to matter.

The student body president at the University of Southern California was walking by a fraternity house on campus the other day when someone leaned out of the window, shouted, “You Indian piece of s—!” and threw a drink at her.

30% of Iowa Republicans recently told Public Policy Polling that they believe Islam should be banned in the U.S.  Another 21% weren’t sure.  And why not?  Participants in a research study published this summer rated Arabs and Muslims as significantly less human than Americans, Europeans, and Japanese (Kteily, Bruneau, Waytz, and Cotterill, 2015).  Not wrong.  Not bad.  Less human. 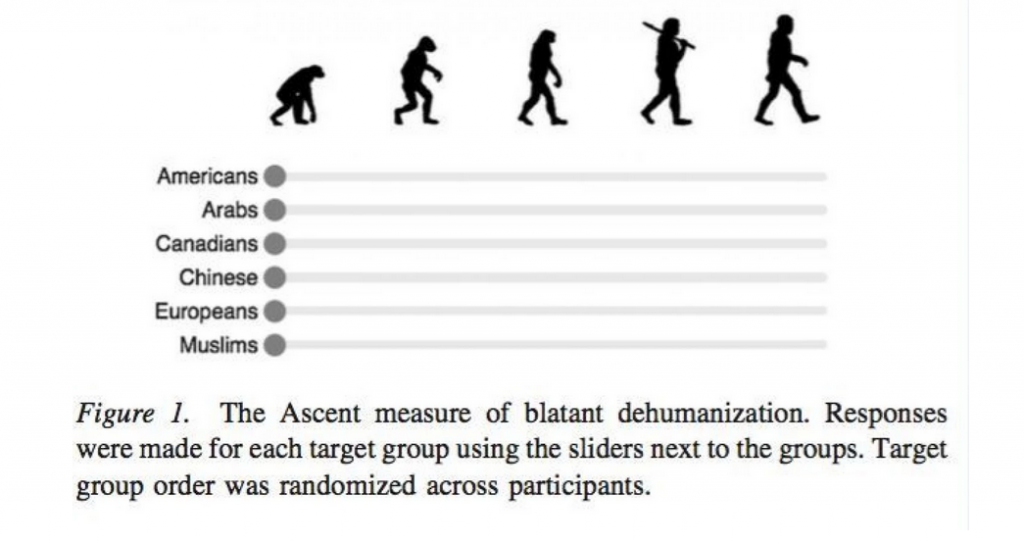 The increase in overt, public, angry racism can be traced in part to the election of Barack Obama as president.  Starting in 2009, pollsters noticed an uptick in the number of overtly racist opinions in their results.  Racist images of the president flew around the internet.  His re-election in 2012 pushed some right over the edge.  Not all Republicans are bigots, of course, and some Democrats are, but several current GOP candidates have abandoned the dog whistle altogether in favor of out-and-out-loud racist appeals.  It’s nothing short of shameful.  I don’t like addressing partisan politics in this space, but there’s no avoiding it this time.

Two Tipping Points?  How?  Why?

The two tipping points represent yet another cleavage in the widening social and political divide in the U.S.  The recent PBS NewsHour/Marist Poll illustrates this well.  It includes several questions about race and, not surprisingly, often finds some pretty big differences in the ways that White people and people of color respond, with many or most people of color asserting that discrimination still matters in a variety of areas of life, and many or most White people saying it does not.  Among Whites, however, usually about a third, sometimes 40%, sometimes even higher, agree that discrimination is a problem.  I’m not saying they understand all the details, but they clearly lean anti-racist.  A minority among Whites, yes, but a sizable one.

Let’s think in terms of three rough groupings of people: those who are

Hence, if I am right, two tipping points.

An early hypothesis, at this point, but I’d love to hear what you think.  Thanks.