Oh my stars have the last several weeks flown by with both joy of the happy and bittersweet kind.

Adventures have included exploration of the Chicago Natural History Museum, ’80 & ’90s-themed milkshake bars, the “World’s Best Fried Chicken”, the creamiest of ice creams, the Art Institute, green rivers, the Cheesecake Factory Experience, nostalgia of Broadway, and a magical view of the city.

Many of the sites to see in Chicago often involve the extensive history of the city, and remnants of the current culture to remind us where we’ve been and the direction in which we’re heading. As a classical studies student, I have come to greatly appreciate the various aspects of art as they exist to relay messages that otherwise could not be expressed through words. Storytelling is a valuable heirloom of the people that tell it. The older I get, the more I realize that I know nothing. Throughout my time in the city, I have come to desire a deeper understanding of things to which I had never even given thought. 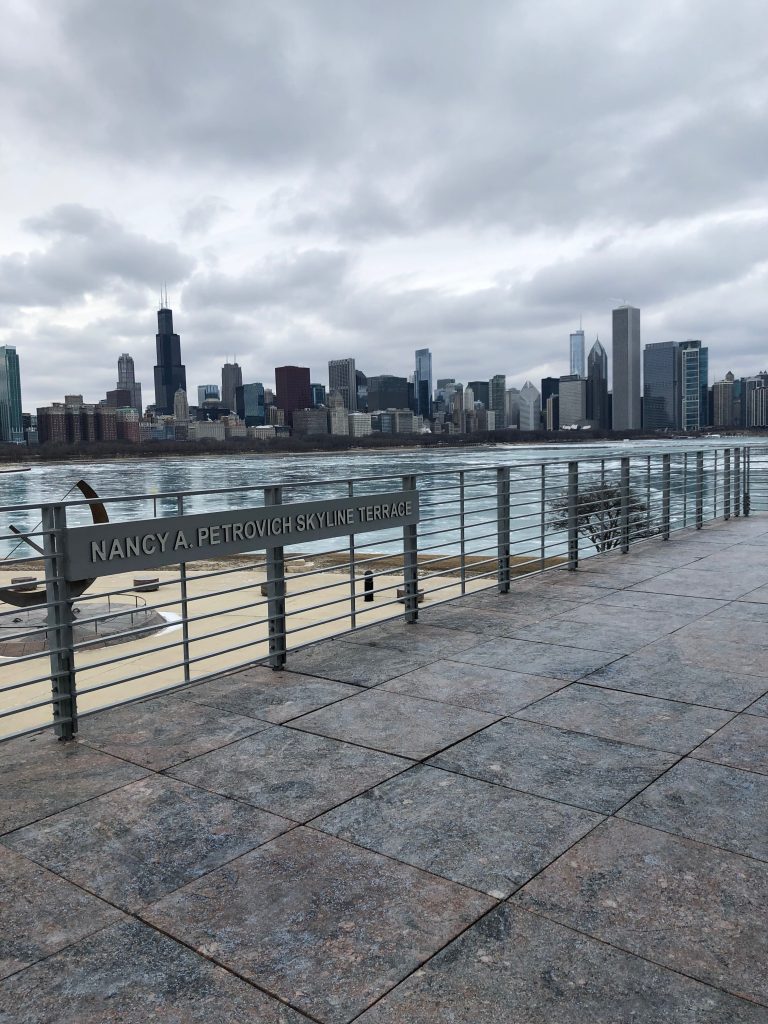 It is unique how Chicago displays its character among its streets. Passing through various neighborhoods, I have seen in each one, at least, one mural that reveals the community’s feelings on social or civil matters. And, it is an outlet through which many individuals have the opportunity to speak their opinions in a constructive manner. Being a Holland native, I have not been exposed to the many definitions of hardship and adversity that Chicagoans have to endure. To see these experiences drawn, literally, on the streets of the city points to the profound struggle that a metropolis, like Chicago, has to reach a point of success. If I’ve learned anything in this internship and city experience, it is that listening to other people’s (both individual and as a community) stories is the first step toward social change. I have begun a new world of advocacy and affecting change to the things that are broken in this world.

For my roommate’s birthday, we decided to check out the grand opening of a business in the Loop, JoJo’s MilkBar. The milkshakes were expensive, but so incredibly tasty. The entire night, they played ’80s movies like Sixteen Candles and Ferris Bueller’s Day Off, and had a giant brite lite (you know, like the ones we used to play with?) 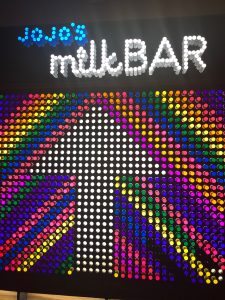 No weekend in Chicago suffices if you don’t gorge yourself with delicious, fat-filled food. What better way than with Southern food at Gus’s World Famous Fried Chicken? Fulton Market in the West Loop offers plentiful food options for Chicagoans that represent the true melting pot the city is. The food was so delicious and just like what you’d get in the South. 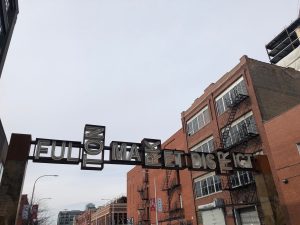 If you ever ask about the must-go-to places in Chicago, just about everyone will mention Jeni’s Ice Cream. Boy oh boy, is that the creamiest ice cream I’d ever tasted. Even creamier than Hudsonville Ice Cream, which (for those who are familiar with the local company) is a feat in itself. While there are several locations around the city, my favorite one is in Old Town (which is about a 15-minute walk away from my apartment). The neighborhood has a small-town feel to it while still retaining the charm of city life. Jeni’s absolutely lives up to its reputation! I’ve been told that Chicago summers are to-die-for, and Jenni’s ice cream would be the perfect middle-of-the-day respite from the Midwest (haha) heat. 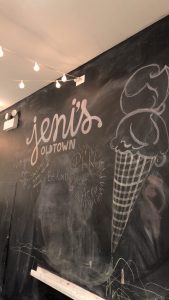 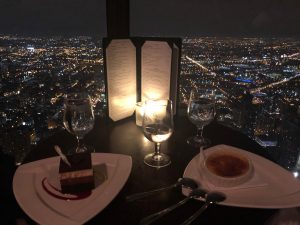 Famous for the 360-degree view of the city, the John Hancock Building also offers breathtaking views from their Signature Restaurant and Lounge. A few friends and I decided to get desserts from the Signature Lounge. As we looked out at the magnificent city below, we discussed the history, engineering and beauty of the creation before us. Although it is man-made, to think that God created beings intelligent enough to build something that elicits such awe…

From the beginning of the semester, I had my heart set on visiting the Ukrainian Village because of the interesting culture and food! How lucky was it that our Chicago Semester faculty lives right in the neighborhood and suggested trying Tryzub Restaurant? 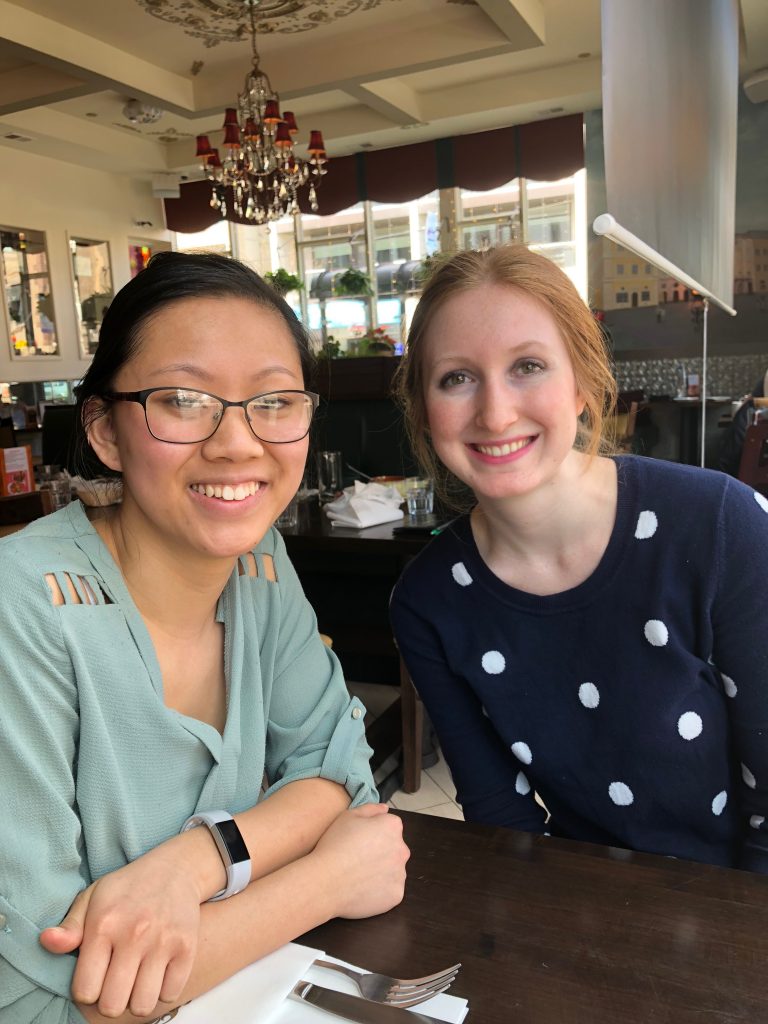 My friend Caroline and I at Tryzub Restaurant

Let me just say, the wait was worth it! Even though the services did take a long time, the food was of the quality that you melt as soon as it touches your taste buds. I ordered a goulash and fried potatoes (not French fries!). It looked like a pot pie, with a crust covering the tomato-based beef-potato-vegetable insides. 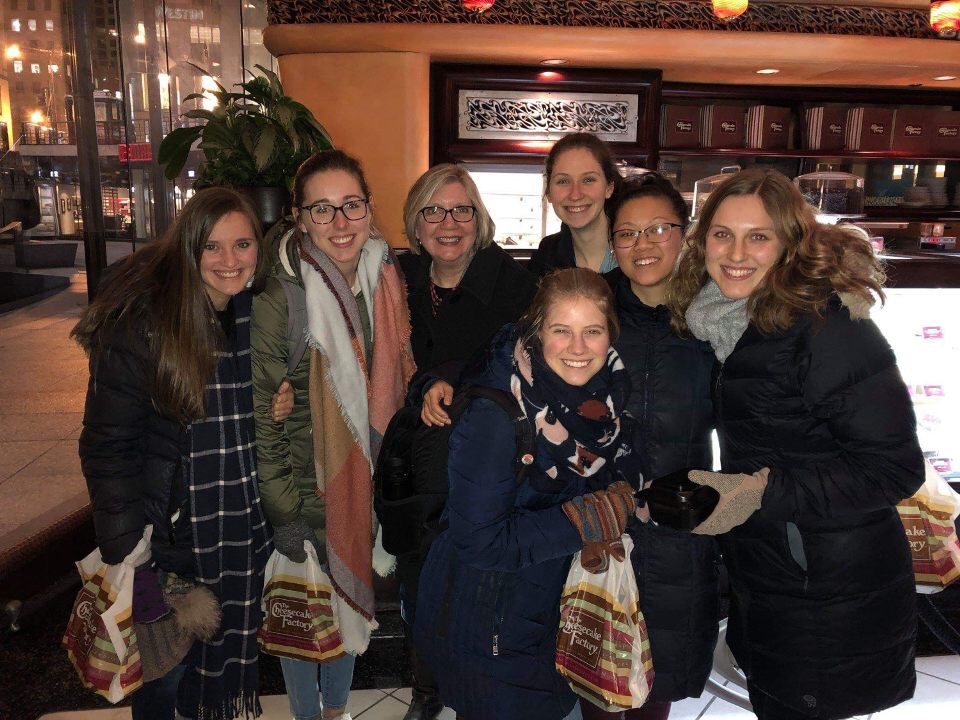 The nursing gals of Chicago

Finally, the pit-stop of all dessert places, the Cheesecake Factory. Right along Michigan Ave., the restaurant is located in the “basement” of the John Hancock Building. The dean of the nursing department, Dr. Garrett, was in the city for a conference and invited all the nursing students to join her. While I got no picture, the mango key-lime pie that I ordered was “oh-so” tangy and sweet and every sort of goodness one could think of…sometimes I dream of that cheesecake. Overall, it was a nice evening out with an opportunity to catch up with a beloved professor. With all the new faces and experiences, it was a comfort to see a familiar one.

In addition to filling up with food, I’ve been saturating myself with as much art and history as my introverted self allows. One fantastic thing about becoming a resident of Chicago is that there are many free museum days for residents. So, Tuesday nights are for the Chicago History Museum; everything from Al Capone to the original L-train cars. I could’ve easily spent several hours looking further into the details of the history. The whole purpose of museums is to increase the community and visitors’ awareness of historical mistakes and successes, right? Well, they certainly fulfilled that design. Another place that encourages original thought and creative inspiration is the Art Institute of Chicago. The four enormous floors of the museum makes it impossible to enjoy all the exhibits in one mere visit. Of the ones I did visit, there was much to appreciate. The artists harness their talents, no matter the medium or outlet, and offered a piece of insight into their thoughts, emotions, passions, and desires toward change. Below, I included a picture that depicts a jazz club (maybe) circa late 1940s. I love this because it captures the essence of African Culture during this era in Chicago. Booming with the smooth sounds of jazz and blues, the heart of the city can be found in the sounds and views of arts. 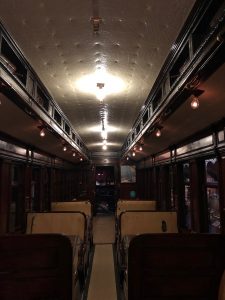 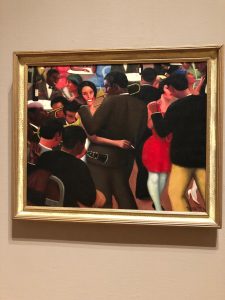 Caroline (my friend pictured in the Tryzub picture) joined us for St. Patrick’s Day. We started off the weekend watching the river turn green, and the remainder was spent mostly relaxing. While it was very chilly and windy on that Saturday (March 16th), it was fun to experience the energy and enthusiasm that native and visiting Chicagoans exude for the holiday. Irish pride is boasted! 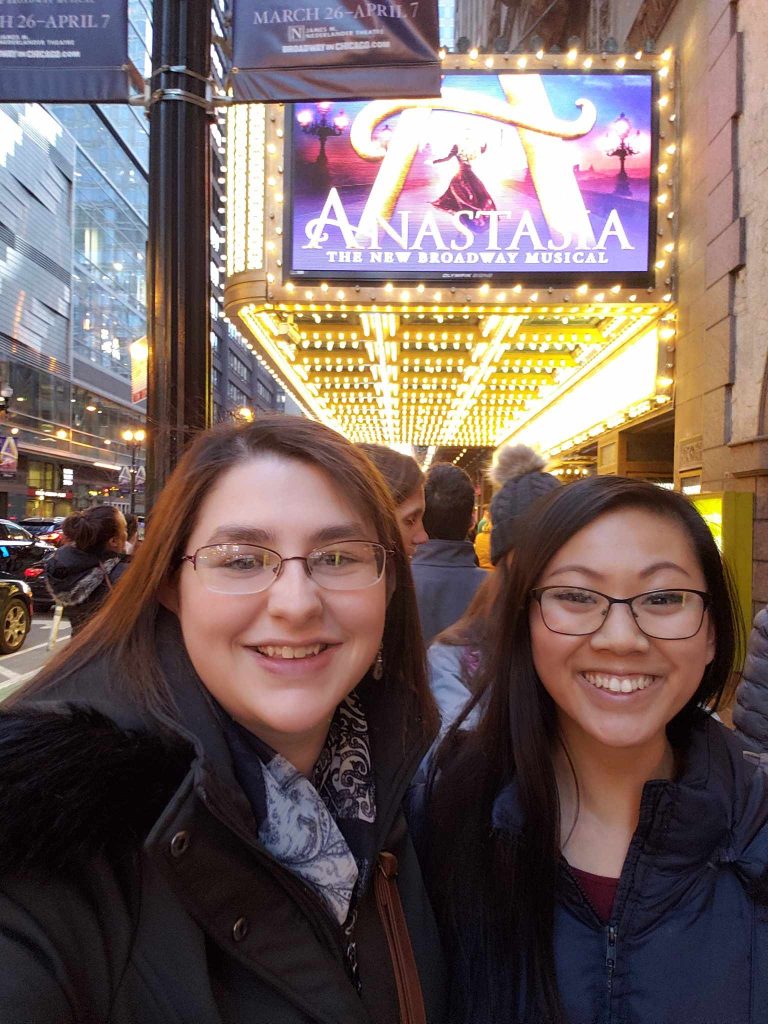 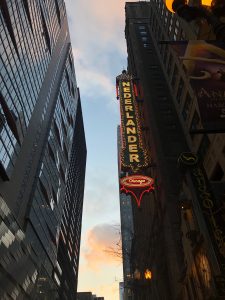 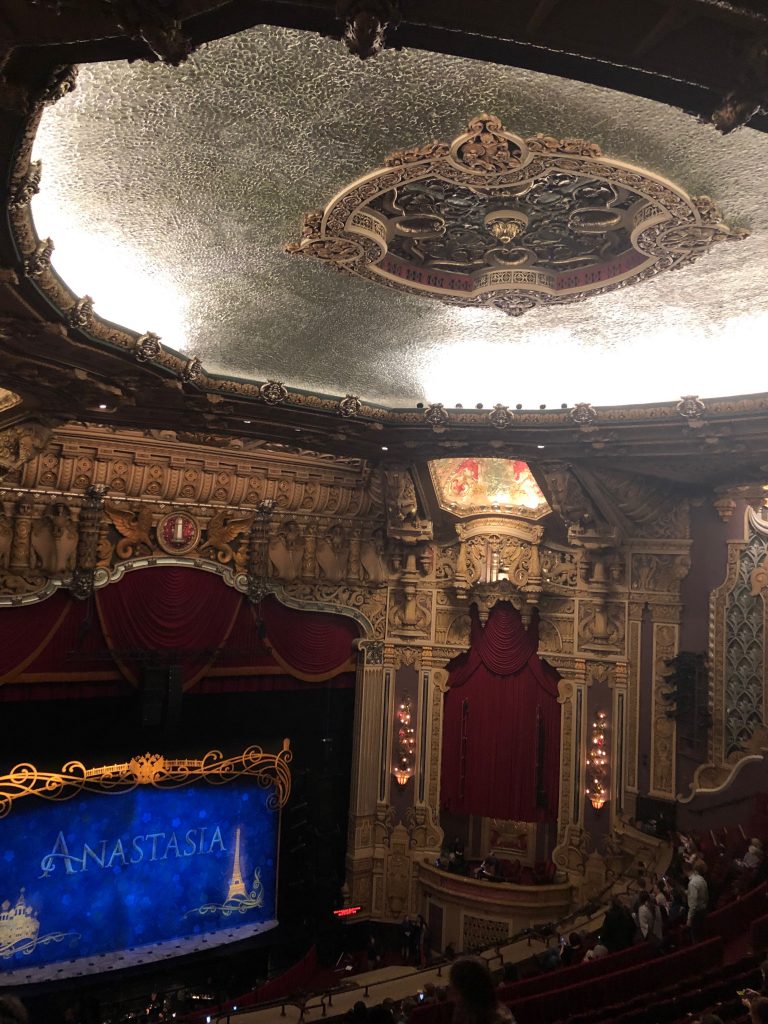 So far, just about everyone in the Chicago Semester program created a bucket list of things to do in the city. One of mine was to see (I know, super specific) Anastasia on Broadway. One of the other Chicago Semester students, Hannah, is a theatre major. Obviously, she was an avid Broadway aficionado. We snatched fairly inexpensive (we are college students after all) tickets and went to the play on April 2nd. As someone who grew up watching the movie, I anticipated the changes they would make to adapt it to the stage. Let me just say, people are so talented, beyond belief sometimes. From the lighting to the music to the singing, stage magic brought the story alive. And, that’s where I’ll leave that. Not much else to say, other than GO SEE ANASTASIA.

On the internship front, I have seen so much learning and mini/major-goal achievements. I have finally made my way through the four perioperative units: gastrointestinal laboratory, operating room, post-anesthesia recovery care unit, and pre/post-operative unit. In each, the nursing skills remain the same, and my nursing assessment is constantly being refined through the tips and tricks of the nurses mentoring me each day. Within the specialty units, I have been catching onto the procedures rather quickly and am eager to apply these skills to my first job. Over the past several months, I have been in the works of applying to graduate school and deciding which one to go to. After much careful thought, I have landed on Wayne State University in pursuit of my doctorate in nursing practice with an emphasis on adult-gerontological acute care nurse practitioner. I am more than eager to learn how to balance full-time work and graduate school, and to improve how I provide care even further.

With less than a month until graduation, I am becoming more and more restless to come back to Holland and graduate (serious senioritis kicking in!). Yet, I am eager to make the most of the rest of my time in Chicago. The weather is finally hitting above 40 degrees, where it’s finally bearable to wear a light spring jacket (I guess Midwest weather is the same no matter what state). I’m reminding myself to live in contentment as Paul instructed us to do, and relish each moment as it comes.