At Hope, I do my fair share of hiking and exploring.  With that being said, the most fatiguing trail I really climb is the Mt. Pisgah Dune Boardwalk where you walk up a series of steep stairs to a gorgeous overlook of Lake Mac and Ottawa beach.  These small hiking ventures did not prepare me for the extensive mountains of Cape Town.  It has been an adventure building up my ‘mountain tolerance’ in the hopes of accomplishing the Three Peak Challenge before I head back to the States.

In my first week of class, my RA organized a group sunrise hike to Lion’s head with assurance that I would make it back in time for my 8 am class.  This hike was known to ‘be easy’ and would only take ‘forty-five minutes’.  Not quite knowing what I was getting myself into, being that our group left in the dark, I was super excited to get my first aerial view of Cape Town.

Immediately, I knew I was in for a challenge as the flat ‘easy’ gradient was as steep as the streets of San Francisco.  Our group was quite surprised to the level of difficulty after being told it was simple, but we worked together to make it up the incline, the ladders, and the chains attached to the mountainside.  It was tough in the dark but it was a thrilling experience and was the first of many mountain treks to come 🙂

As we approached the summit, the call to prayer echoed across the Bo-kaap valley.  When we finally reached the top it was refreshing to view the sun peaking out above the mountains.  Unfortunately, this was our clue to start making our way back down.   Our hike took much longer than the expected forty-five minutes, and we were even jogging down the mountainside at some points, but we all made it to our first class.   Just a normal day in Cape Town… 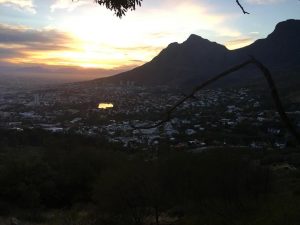 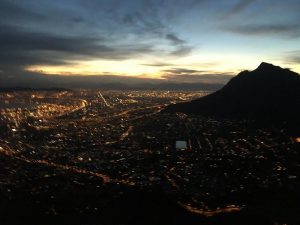 Our next house adventure was to take the journey up the New Natural Wonder of the World, Table Mountain.  Although there was a cable car, we decided to take the steep walk up Platteklip Gorge to the summit.  It was far more exhausting than Lion’s head but the views were phenomenal!  I now understand why CapeTownians call Lion’s head ‘easy’. 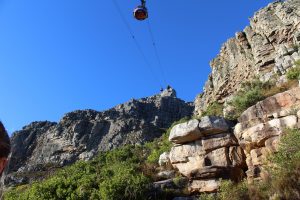 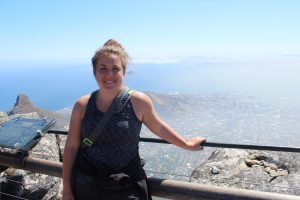 Of course we had to journey back up to Lion’s head, this time during the day and with proper hiking attire.  No matter what time of day, this peak is my favorite viewpoint of the city;  you can see the Apostle peaks and the famous Camps Bay in addition to the city bowl and Robben Island. 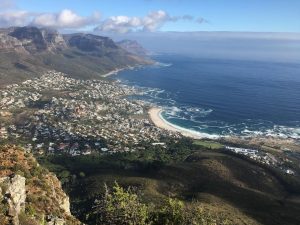 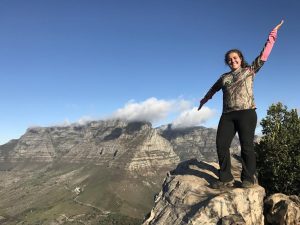 By far the longest peak to climb was Devil’s peak; it took us seven hours to reach the summit! Near the end, I felt like I was in ‘nature’s ball pit’ as we climbed with all fours in sliding rocky terrain.  I was proud that we had made it to the top after our RA revealed that we were just the second group of abroad students to finish the hike all the way through on the first try. 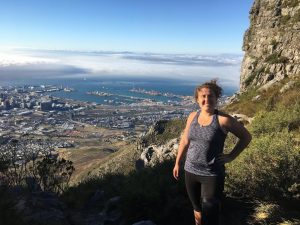 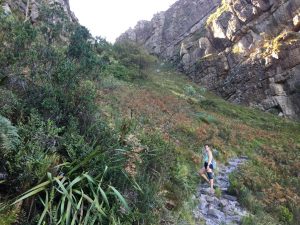 Before I leave I hope to accomplish the three peak challenge where you summit all three peaks in the order of Devils peak, Table mountain, and Lions head in just one day (left to right in the picture below).  I think, after many individual climbs, I am ready to take on this crazy adventure! 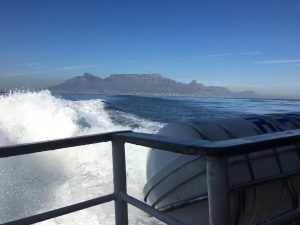 In addition to climbing to the summit of the many mountains, there are a variety of other natural attractions just as beautiful.  We took the skeleton gorge trail to the opposite side of Table Mountain to view a retention lake.  On our way up, we climbed up a waterfall and passed goats on our trail.  The protea, the national flower of South Africa, was beautiful in bloom.

On the top of the mountain the trail flattened and we made our way to the water.  Near the shore, I saw a large wasp take down a giant spider which was quite crazy and terrifying since I had only seen that on the Discovery channel! 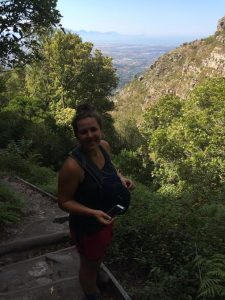 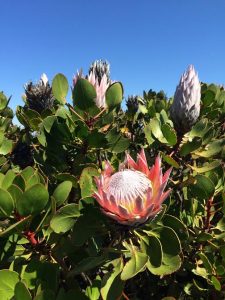 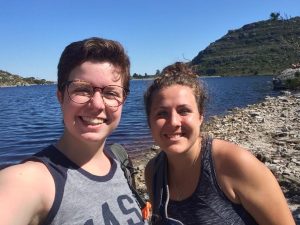 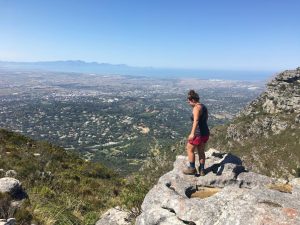 Again I journeyed up Lion’s Head to find a well known cave that was off of the beaten path.  The path was really steep but the view was unbelievable once at the cave! 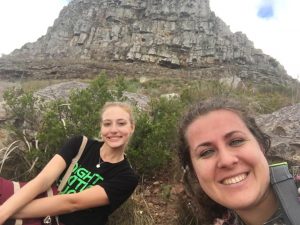 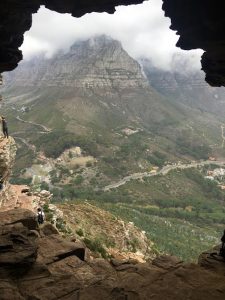