Molweni!  Sorry for taking so long to post another blog.  I am happy to declare that I have been having a great time here in Cape Town and have found myself immersed in fascinating discussions and outrageous adventures.  Through the limited Wifi and taxing essay assignments, I have sadly been lax on sharing my experiences via blog.  But I’m so excited, with school winding down, to share the activities that have become a normal part of my life these past couple of months 🙂

The weather has turned quite chilly.  It is beautiful, refreshing, and crisp; like my favorite Michigan season of Fall.  In true college fashion, when walking outside my mind automatically associates the weather with football season.  Although football season is not present in South African culture nor the actual American version of the sport, that has not kept me from getting involved in an array of other sporting events.

It has been quite fun playing volleyball for the university team and joining the abundant pick-up soccer games at the field in walking distance from my residence.  Additionally, I have journeyed up to campus multiple times to watch the Ikey’s UCT (University of Cape Town) rugby team battle it out in a game (I’m almost ashamed to admit) far more action packed and intense than American football.  These players have no helmets, no pads, and no ‘downs’. It’s quite thrilling to watch! 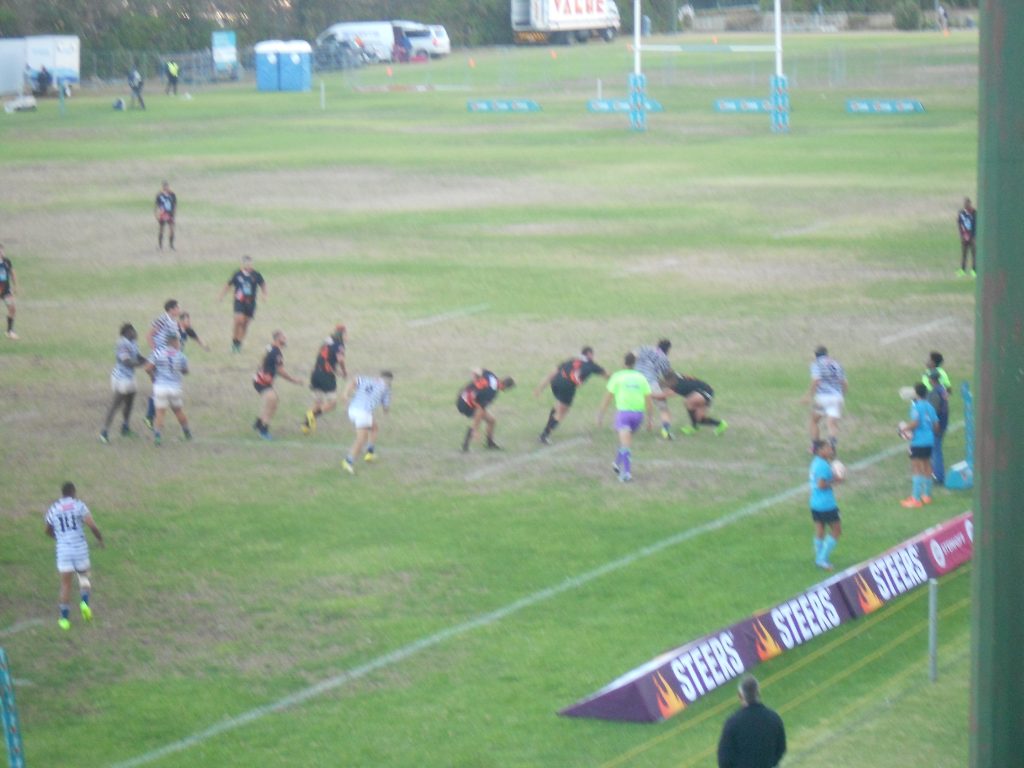 In addition to these collegiate level sports, which aren’t nearly as recognized as in the United States, I sought sporting venues off the campus bubble to watch the professionals take to the ‘stage’.

It was so exiting to watch the Kaiser Chiefs (Johannesburg soccer team) play City (Cape Town football squad) in an epic match at the Cape Town stadium, the iconic field from the World Cup in 2010.  It was one of the closest games I’ve watched and City thankfully won in the last thirty seconds.  The stadium erupted in happiness!  The vuvuzelas’ made their presence loud and clear. 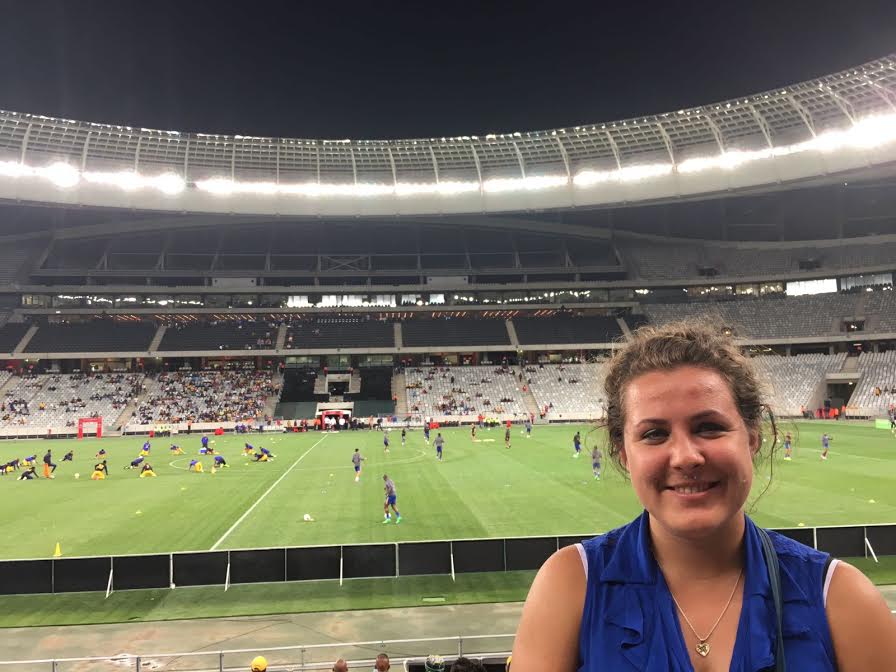 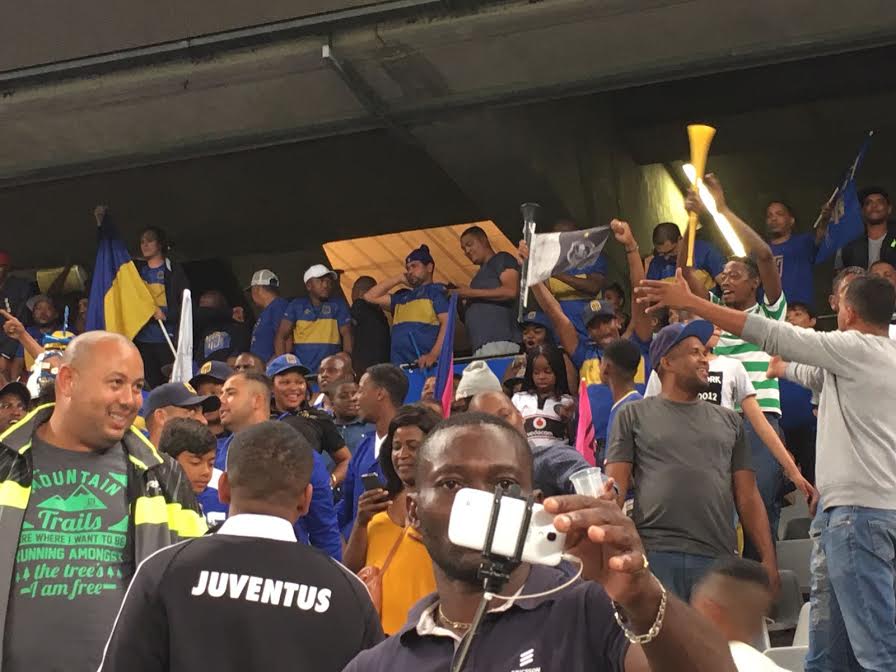 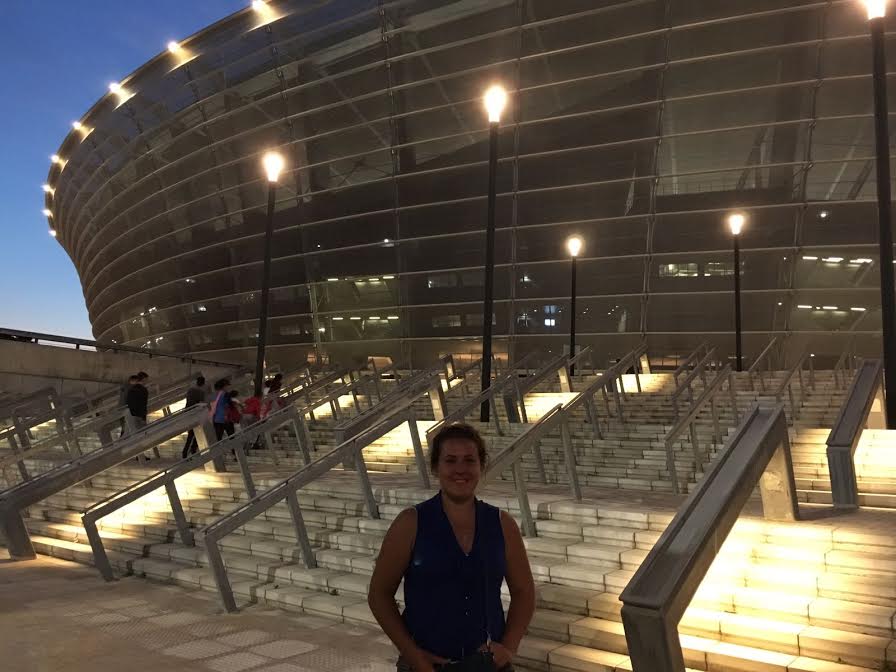 While the IKEY’s games at campus were fun to watch, it was great to be immersed within an energetic crowd; like the one that was present at the soccer match.  But the combination of a great crowd and an intense rugby game made for a new level of experience!

With my IES program I was able to see the local professional rugby team, the Stormers.  Rugby, similar to football in Europe and ‘football’ in the United States, is treated almost as a religion. The stadium was packed, the vibe was lively, and the players were delivering a great show! 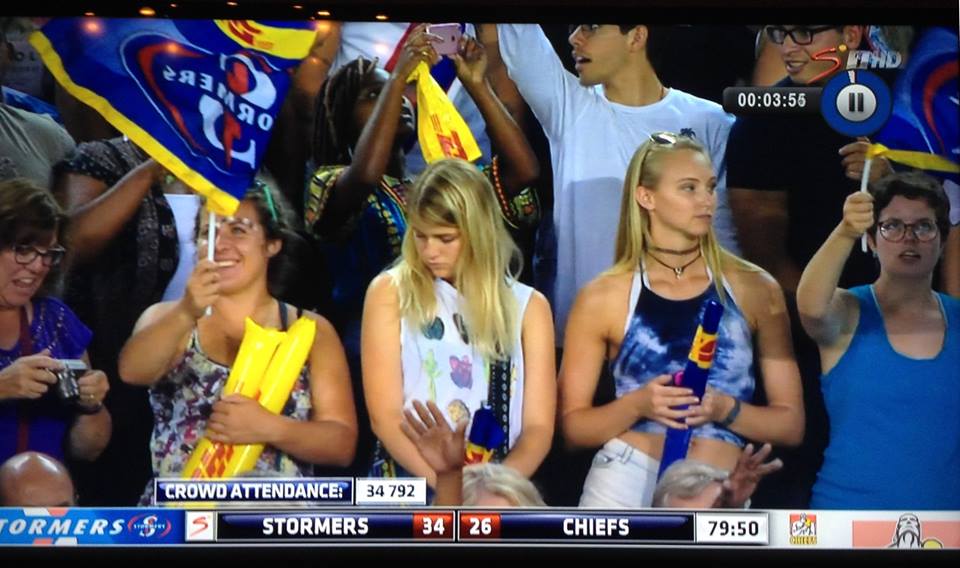 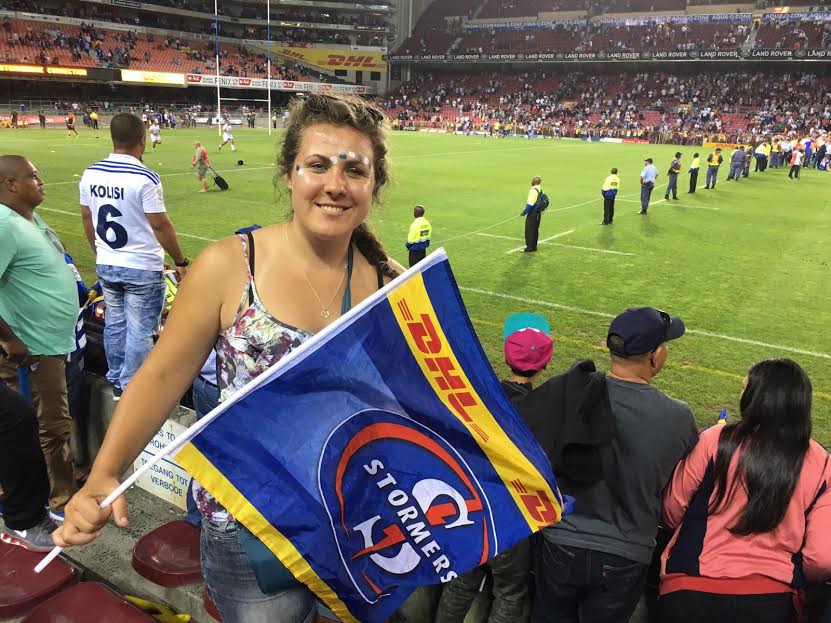 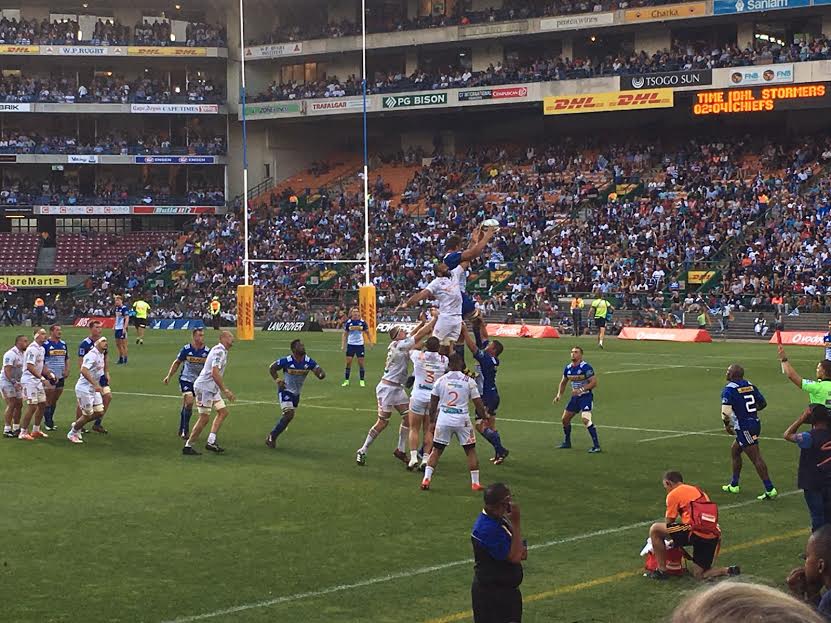 The entire crowd was on their feet and the air was electric with competitive spirit and energy! It was a tough game,  good plays from both teams were made, but we ended up triumphing over the New Zealand team.  My night got even better when I realized that I had made it onto International television, being one of the members of the crowd on the live footage! There is no doubt that sports can make you feel enhanced emotions of elation and frustration.  Sports can make you cry in defeat, can make you laugh in frustration, but most importantly can make you celebrate as a united front.

In my newfound fondness of rugby, I found that an emotional history coincided with the emergence of the sports popularity nationwide.  The white dominated sport during apartheid had become a uniting platform during the 1995 World Rugby Final, held just a year after the first democratic election of Nelson Mandela and the lifting of sports related sanctions.  In a stadium full of a majority white South Africans, Mandela came running out to support his nation as the first black president in a traditionally ‘white man’s game’.  As my IES instructor said, ‘for many, starting in that moment, Nelson Mandela had become the president to the entirety of South Africa’.

When the Springboks went on to beat the New Zealand national team, the majority black population was alongside their fellow white South African population cheering for the victory.  This story enhances my love for sports and the many world wide cultures that go with them.  The same spirit that can make you hug a stranger after your team scores a goal, can also unite a  nation; even if its only just for a moment.