This weekend I took my first non IES sponsored trip, and I went with two friends to Sevilla! We decided to take the six hour bus trip to Sevilla and back in the same day.

On Friday, our bus left at 1:20am from Salamanca and we arrived in Sevilla at 7:35am. After getting our fix of coffee at the bus station, we walked along El Rio Guadalquivir towards downtown. The first monument we passed was La Torre del Oro, a watchtower that was originally built for defense purposes next to the river.

At 9:30am we visited El Real Alcázar de Sevilla, a palace built by moorish kings. The detailed architecture inside was incredible, but my favorite part was the gardens. I entered the gardens and then they just kept going, they included fountains, ponds, plants, a labyrinth, and more! 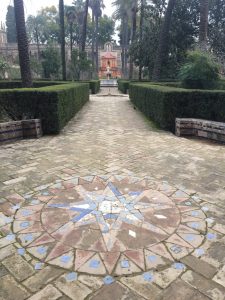 After finding our way out of the gardens we stopped for a quick sandwich and then went to La Catedral de Salamanca. The most impressive thing about this building is the outside full of detail and overlapping parts. Inside the cathedral is huge and filled with art, areas dedicated to many saints, and Christopher Columbus’ tomb. We also saw one of the most famous landmarks of Sevilla, La Giralda, the belltower of the cathedral which was originally a minaret for a mosque.

The next place we went was La Plaza de España, which features a section for each Spanish city. This area of a park also includes an enormous fountain, a small manmade river for rowboats, and horse and carriage rides. By this time of the day it was sunny and warm, and we sat for a while soaking in the sun, eating snacks, and taking in the amazing plaza.

After a traditional Spanish lunch of paella and sangria, we visited El Metropol Parasol (a sculpture near Sevilla’s plaza mayor), the outside of La Plaza de Toros (the bullfighting ring), and wandered until it was time to catch our bus ride home. At 8:30pm we hopped on our bus back to Salamanca and arrived at 2:45am the next day.

It was a surreal 24 hours of travel. I got to see some of the most cherished landmarks of Spain on a beautiful sunny day, so the total of twelve hours on a bus were worth it.