Classes began this week. It is going to be an adjustment getting used to going to a large university – but I think the change will be good! I’ve always wanted to get a “big school” experience. Max Sievers (another Hope student studying abroad with IES in Christchurch) and I both had our Tuesday classes canceled so we decided to hike the Bridle Path.

The Bridle Path is the historic passage from the city of Christchurch to the small town of Lyttleton. Originally constructed in 1850 it was the only way for the original pioneers to cross the Port Hills until the construction of the Lyttleton tunnel in 1964. Now the path is popular for hikers and tourists in search of adventure and a good view.

Max and I caught the bus to the base of the trail and hiked up. It was much steeper than either of us had anticipated but the view overlooking the city of Christchurch was incredible. After about a 40 minute climb we made it to the top and could look down at Christchurch on one side and Lyttleton and the harbor on the other. We decided to follow the trail down into Lyttleton and see where it led. Down by the water we found a public transport ferry that would take us to Diamond Harbor, opposite Lyttleton on the other side of the water. Without hesitation we hopped on – when adventure presents itself, you have to leap at the chance!

While we were crossing the water we ended up talking to the captain and he recommended that we hike the Mt. Herbert trail, that originated right from Diamond Harbor Beach.

It was just past noon so Max and I decided to go for it. Starting out, it was hard to identify the trail, but pretty quickly we learned that we just had to look for the wooden posts with the yellow painted tips. One of the most interesting things to me was that this public trail went through private land! It was maintained by the DOC (Department of Conservation) and was

accessible to everyone, yet I found myself walking though private sheep pastures and farmer’s cows quietly chewing their cud.

The walkway was not always clear…

Random cows stared at us as we hiked past

It was incredible to walk through so many sheep pastures! 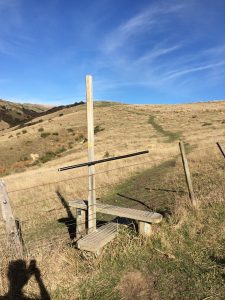 To get from one farmer’s enclosure to the next we had to cross over fences and
there were these brilliant step-bench contraptions designed specifically for this purpose. To the right is a picture of one.

After about an hour of hiking Max and I were about to reach the summit. Only we got there and found that we had to continue on up! This happened a total of 4 times. This was definitely one of those trails that just kept going on and on and on. After a total of two and half hours of steady climbing we finally reached the summit! The view was remarkable.

Mt. Herbert is a part of an extinct volcano that juts out into the ocean just South of Christchurch. From the top we could see Christchurch, Lyttleton, Diamond Harbor, and mountain ranges on every side. A photo will never do it justice!

After spending about ten minutes on the windy summit we began our descent and traveled back home. It was a day well spent.