With two short weeks left in my program, I can’t help but feel great sadness to be leaving a place I’ve really started to call home – knowing that this experience will never be able to recreate itself. Although I traveled extensively during my study abroad experience, some of my favorite moments have been those that might be overlooked. For example, last week Tiffany and I

went to eat at Market Haus, which is an area that has a bunch of food stands from all over the world. It had been a particularly long morning because our program was getting ready for Model EU which was happening in less than a week. Tiffany and I got one of my favorite meals (which is like an Arabic burrito) and we were chatting away in English when this kind older German gentleman sat

next to us. He took one bite of his food and started chatting away to us in fluent German… As often is the case, I was stuck in between wanting so badly to speak and learn from this local and not having the language capacity to do so. However, after almost four months of an intensive German class that meets 4x a week, I decided to apply everything I knew into this conversation (and maybe making up a few words along the way). I was so surprised to notice how much I understood, and was able to tell about myself to this older German man. After bout a 20 min conversation, the man had finished his meal, gave us a hearty laugh, a pat on the back, a wink and left. This moment inspired a lot of personal reflection of my time here, and the interesting people I’ve met along the way. Whether it was a couple of famous rowers from Australia while lost in the streets in Berlin, to an artist in Athens that invited me to the most intricate café just because he wanted to learn about Mexico and the US, to my eccentric flat mates that have taught me a new way to project your love for life by caring about the environment around you, to a man from Chicago who retired to Germany so his German wife could be with her family “because in marriage its all about give and take.”

I’m going to miss my professors, who parallel to my experience at Hope, really care about their students and have actively developed a relationship with them. Before each exam, my favorite professor takes us out for eine Tasse Kaffee because “American students love coffee and German professors love coffee, so why not.” This professor’s course covers the EU perspective on one of my favorite topics – migration. For a region that was once known for its emigration, it has been fascinating to gain a deeper understanding on how events like the fall of the Soviet Union, the Ukraine crisis, Mare Nostrum, etc. influence the EU today. Here are a couple of pictures of what the IES EU center, where we take all of our classes, looks like. It’s a beautiful classical building that has been renovated and given a pretty modern interior. Unlike many other programs, this one has its own building which is really nice! 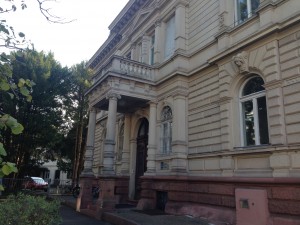 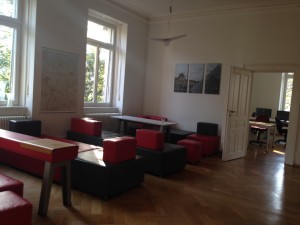 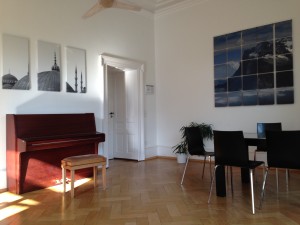 Similar to Hope which has Model UN, our program has Model EU at the end of the semester in order for the professors to grade us on how we are able to actively incorporate all that we’ve learned into three days worth of intensive sessions. Each of us represented a member state as either a foreign minister or president. I was assigned the role of the president of Spain, and we had to debate and reach common proposals for four main topics: migration, youth unemployment, the energy crisis, and terrorism. Each of us had to completely embody our country’s views and this resulted in heated discussions over each topic. Our closing ceremony for this portion of the program was hosted in a fancy German restaurant where we had a 5-course meal and were joined by our professors. It was such a nice way to wrap up the semester!

While Hope is in its last week of exams, I will be taking mine next week followed by two days of down time in Zurich. I am forever grateful for this opportunity that has exceeded everything I could’ve asked for. For now, I’m off to explore Freiburg’s Christmas market. See you all on campus!