One thing I know I’ll take away from France is an increased environmental consciousness.  I thought I already had some things going for me–I don’t use plastic bags. I walk or bike if my destination is within a reasonable distance. I recycle. But in France, they have a much heightened sense of ecologic responsibility, and it shows in a lot of ways.

Firstly, you will never have a problem finding a trash can or recycling bin. The two are generally right next to each other and in some cases are part of the same receptacle! It is impossible to say recycling is not convenient. There are also large square bins on every few street corners for plastic and glass containers. This is really good idea, not only because the French drink a lot of wine, but also because the French drink a lot of bottled water. The Bretagne region of France in particular is known for having bad water, so they go through lots of plastic. (Rennes, I’m told, is fine. I drink tap water and nothing bad has happened.) Luckily, those bottles are never thrown out. 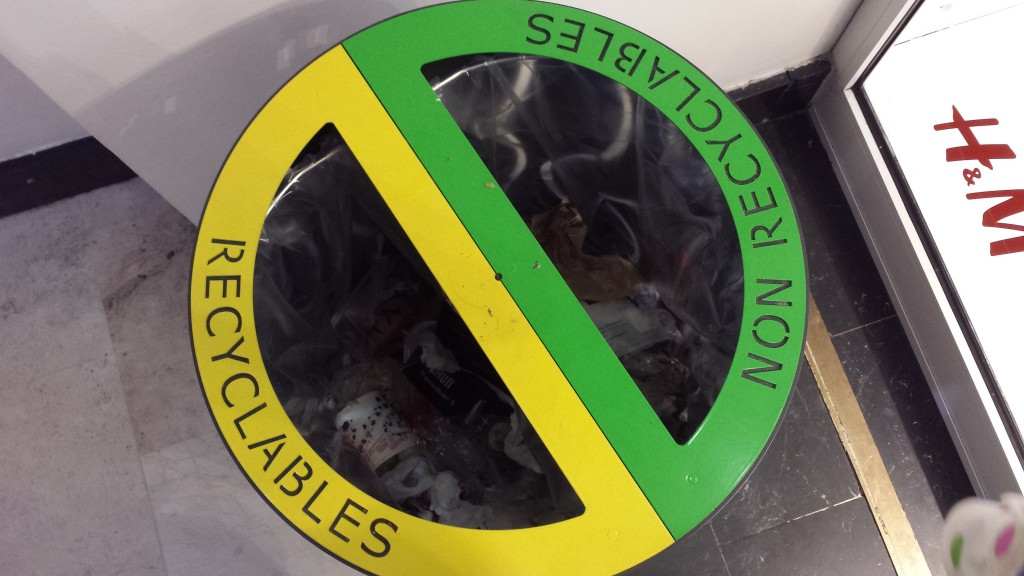 Secondly, paper is conserved more than I’d thought, particularly at the university. Hardly anyone owns their own printer and there are only three places to print on campus. Students are only allowed 100 sheets of paper for the entire academic year. With the way it’s set up, it really makes you think about what you’re printing and whether you truly need to or not. That idea may not be intentional. In fact, the printing limit was probably put in place to lower tuition fees. But I know that when I get back to Hope I won’t be able to use the library printers without some serious forethought.

Now, I’m not from a city, so perhaps I know nothing, but public copy shops seem to be far more common here than in the U.S. My guess is that this is because home printers are not commonplace. I’ve actually had more people ask me for directions to a copy shop than to any other location, so they must be decently popular. Last Thursday I needed to print copies of a worksheet for the high school English class I’m assisting. The campus printers were down, so…

I walked into town and went to a copy shop!

It was really neat. I went to this particular shop because I’d been told that morning that this place had computers attached to each printer. That way, customers can bring their own files via USB. Some copy shops are only equipped to make copies of an existing sheet of paper. I love small businesses, and the lady who ran the store was super nice. I’d chosen to wear my nice black flats for teaching later that day rather than my waterproof rainboots. A word of advice: Never do that in Bretagne. It will always rain on you. So my feet and stockings were soaked through when I arrived at Copyroom. However, the shopkeeper didn’t look at me like I was a weirdo, like people sometimes do. She made a joke about Bretagne being one large shower, laughed, and directed me to the black-and-white printer: numéro 4. My 25 copies cost €3.25, but I also received a suggestion to head over to Brioche Dorée (France’s Starbucks) and get myself a croissant and café to warm up. I did so. It was heavenly.