I love arthropods. Perhaps to an unhealthy degree. But I realize that many people do not (and for the record, they are wrong), so I am trying to contain my enthusiasm to a single post. There may be a part II later, though.

First, a small dose of unsolicited education: bugs, insects, and arthropods are not the same thing; they are categories with varying levels of specificity. An arthropod is anything that sports an exoskeleton, segmented body, and jointed leg pairs. Insects are arthropods that have all of the above and three-part bodies, three pairs of jointed legs, compound eyes, and a single antennae pair. Bugs, more technically called Hemiptera, are a particular kind of insect that has sucking or piercing mouthparts, membranous or only partially hardened wings, and doesn’t undergo full metamorphosis.

For example: an aphid is a bug, insect, and arthropod. A beetle is an arthropod and insect, though not a bug. A lobster is an arthropod, but not an insect or bug. The takeaway here is that if you see a creepy crawly invertebrate, say, “what a beautiful arthropod!” and whether it’s an aphid, a lobster, or anything in between, you’ll never be wrong.
Or you could just keep on calling everything bugs, because taxonomy is ridiculous anyway.

We’re now staying in Wilson Botanical Gardens, part of the Las Cruces Biological Station in—you guessed it—Las Cruces. The garden plants are thriving and beautiful, but even more exciting are the creatures they attract! Get ready to see lots of photos, both from Las Cruces and our Palo Verde stay. 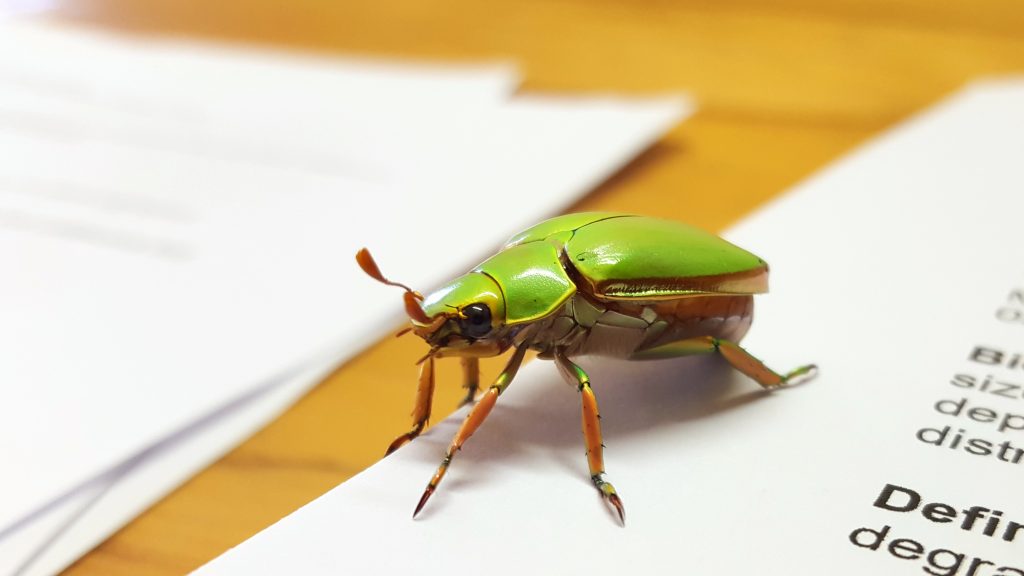 Let’s start off with something cute and charismatic! This little guy is a scarab beetle, probably in genus Chrysina (called the Jewel scarabs) based on those bright colors. He’s related to the June beetles that fly into your face during the Michigan summer, and is every bit as bumbling and friendly. Here, he’s helping me cram for an exam. 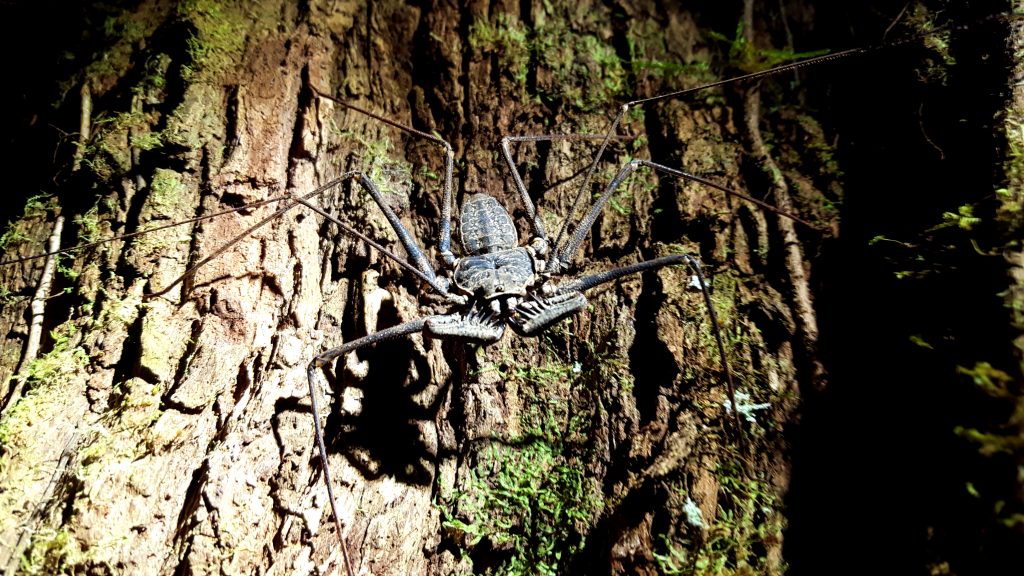 Now for something completely different. I know this tailless whip-scorpion looks like something that crawled out of Tim Burton’s nightmares (and has a fearsome name to match!), but it’s harmless. It is a member of order Amblypygi, a name that literally means “blunt rump.” This refers to their lack of any sort of tail (or venom) like their scorpion cousins. You are only in danger of a pinch if you stuck a finger into its little claws, called pedipalps. These guys come out at night to hunt other insects and defend their territories, and adorn many of the trees in Wilson Botanical Gardens. The star of this photo measures about seven inches across, as pictured. I don’t know how long he’d be with straightened legs, but some specimens can get up to nearly 30 inches in legspan. 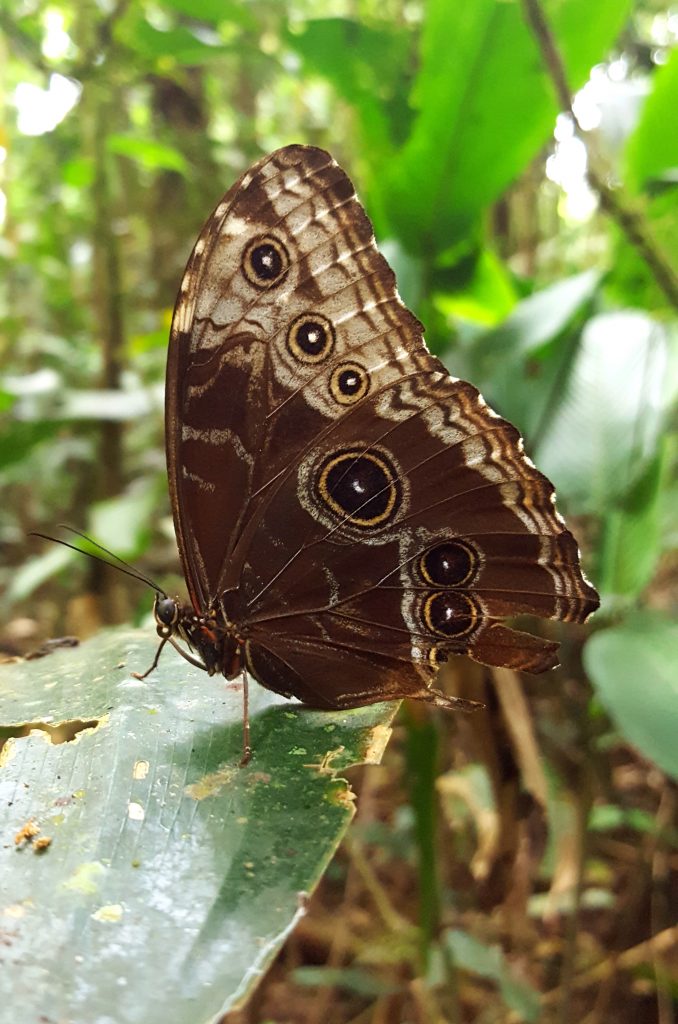 This is a (very uncooperative) blue morpho butterfly in the forest at Las Cruces! She refused to open her wings for me, so I was unable to photograph the brilliant iridescent blue scales on the dorsal (top) side of her wings. I promise they are there, though. In the meantime, you can admire her drab brown forest camouflage and pretty eyespot collection.

(Disclaimer: I do not know how to sex butterflies, so I just pick a gender and run with it)

Army ants! Likely Eciton spp., given their proliferation here. The little black-bodied gals are workers, and the pale giantesses are soldiers. Males are identifiable by their wings.
This video isn’t sped up—they really do keep that busy! Instead of confining themselves to a hill, army ants lead a nomadic lifestyle. For much of their life cycle they aggressively forage en masse during the day, and make their bivouacs (yes, that is the scientific term for temporary hills) each dusk. The name “army ant” comes from that mass foraging behavior, which looks a bit like waging war on the forest. 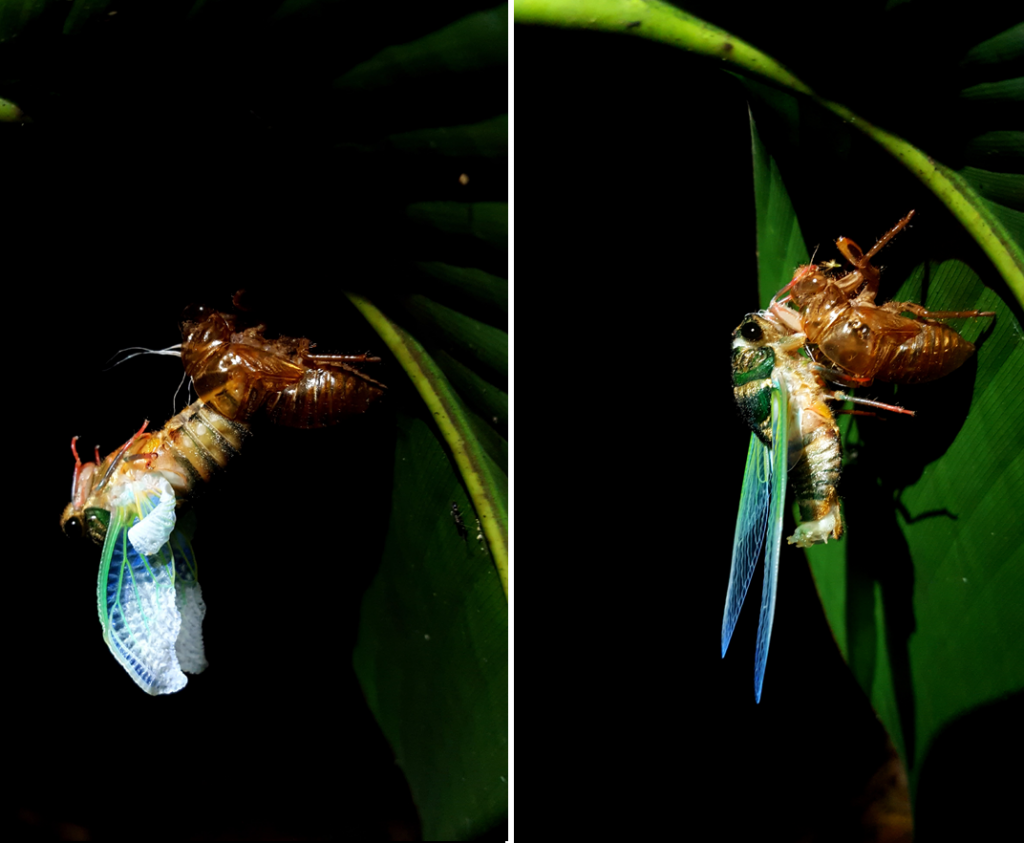 It’s a cicada! This guy is a Hemipteran, a true bug. These photos are of the same cicada, about forty minutes apart. Look at that handsome devil sclerotizing (inflating and hardening) his wings. It’ll be another of couple hours before his colors dim to the mottled greens and grays of a mature adult. These guys are harmless vegetarians who feed on sap in all parts of their life cycle, which can last from 2 to 17 years, depending on the species!

Fun fact: that brown exoskeleton they left behind after moulting is called an “exuvia.”

The first time I watched one of these swoop between trees, my classmate came up behind me and asked what bird it was.
This is Tropidacrus dux, a giant Central and South American locust. Their wingspan averages about seven inches across, and they are so often mistaken for birds that hunters are known to shoot them out of the sky by mistake. Poor things.
See that bright red flash when it flies away from my hand? This fellow’s crimson wings are a great example of deimatic coloration, which startles and disorients predators who are after a tasty grasshopper snack. Or perhaps more of a banquet, in this case. 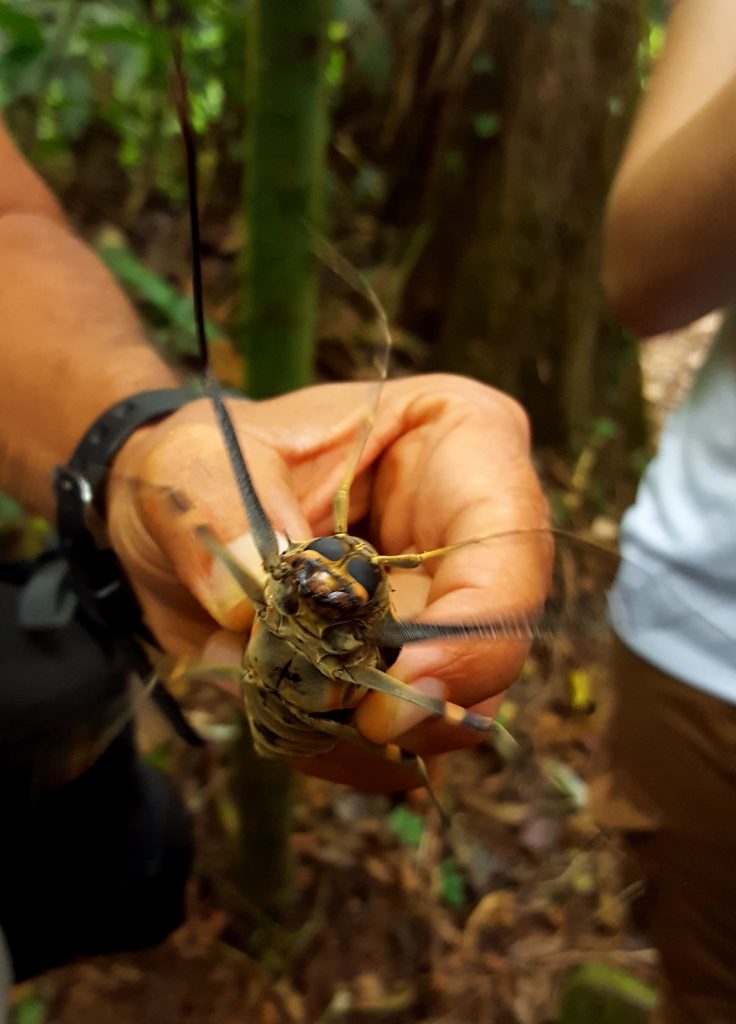 This unhappy camper is a Harlequin beetle (Acrocinus longimanus). They have a beautiful, if somewhat seizure-inducing, pattern of black, red, and yellow on their backs, and I would absolutely recommend looking up a picture.

These fellows are a famous example of commensalism, which is a type of interaction where one species benefits, and the other is unaffected, for good or ill. Specifically, Harlequin beetles unwittingly ferry little pseudoscorpions around, which feed on mites around the forest (and sometimes underneath the elytra, the colorful hardened forewings of the beetle).

This specimen squirmed away shortly after this photo was taken, and managed to take a pretty good chunk out of my professor’s hand before he flew away. Thank you, Professor Mau, for the blood that you shed on behalf of our education. 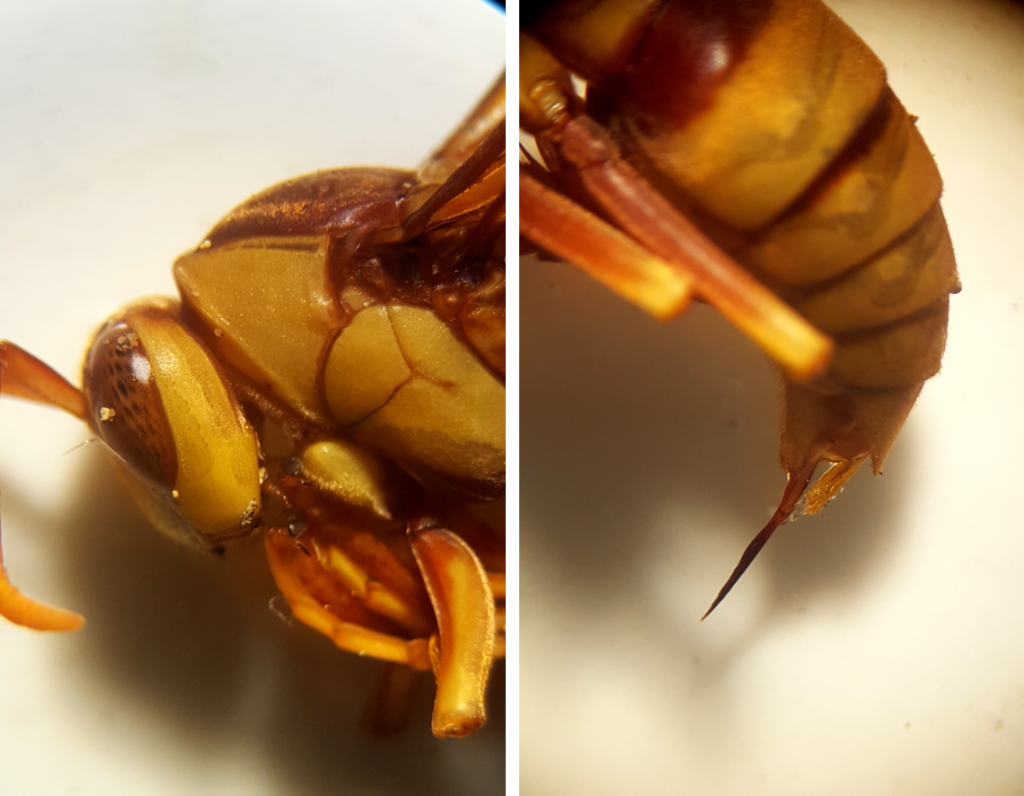 Meet the queen of wasps, Polistes. This thing is a little over an inch long, and is sporting the biggest stinger I’ve ever laid eyes on. Polistes wasps are valued by farmers because of their relatively low aggression and high predatory habits, which keep caterpillar populations down and crop production up. 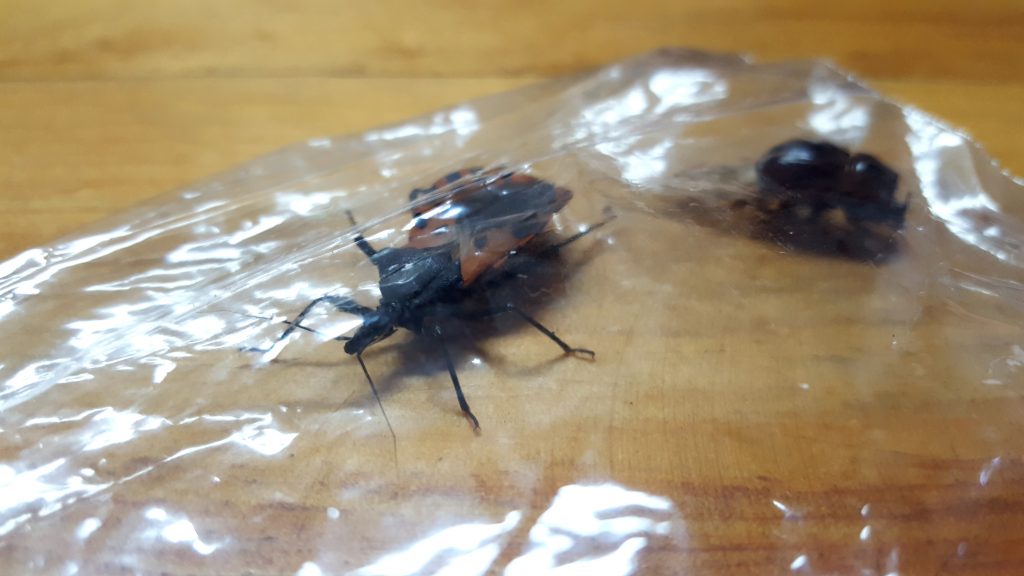 The insect of interest is the one on the left, a member of family Reduviidae. I almost didn’t include this fellow, because blog posts are supposed to be upbeat and there is nothing upbeat about him. But he is extraordinarily interesting, so here we go.

This is Prince Charming, the kissing bug. There is a reason he is sealed tight in a bag, far, far away from my skin. You see, kissing bugs carry around your friendly neighborhood microorganism, Trypanosoma cruzi. These sweet little kissing bugs get their kicks by sucking at the blood in or near your lips, and then defecate in the same area. If their feces (and the Trypanosoma cruzi in them) make it into your bloodstream, congratulations! You are a proud owner of Chagas disease. Eight to twelve weeks later, it’s chronic. The good news is that symptoms usually don’t present until twenty years later, when you abruptly die of heart failure. Yay.

Luckily, the kissing bugs in this area tend not to defecate on your face. So, while they may snack on your lips, you probably won’t get the disease. And we have mosquito nets for a reason; these fellows are much too large to make it through the fine mesh.

A post on Central American arthropods wouldn’t be complete without a tarantula picture. Here’s one I saw near my room in Palo Verde! These guys have a bad rap, but most New World tarantulas don’t have particularly potent venom, and you would only be in real danger if you have an allergy. Their first line of defense is the urticating bristles (irritating hairs) on their abdomens, which they fling at you if you’re particularly annoying. They also stridulate (make hissing sounds by rubbing their legs together) and slap at you with their forelegs before they resort to biting, so there is plenty of warning. The females are pretty playful, and will often submit to a little handling without fuss. 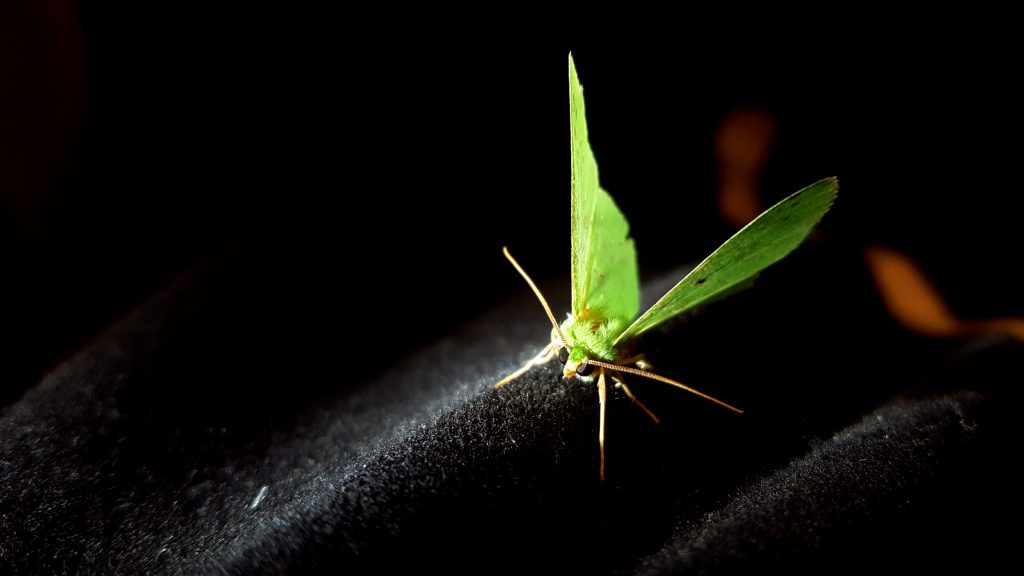 I leave you with a photo of this adorable little moth friend. She landed on my leg as I walked past a light in the gardens, and we immediately became best friends.

Say hi to some of your local arthropods for me! They deserve a little love.

All the best,
-The Crazy Cat(erpillar) Lady