Since the weekend before we went to the beach and had quite the relaxing weekend, some of us decided to go for some more adventure and spend this weekend hiking. Eight of us traveled to Quilotoa, a small town in the middle of nowhere that’s about three hours south of Quito. This rural town is home to Laguna de Quilotoa which is a crater lake that was formed by the collapse of a volcano.

We left on Friday morning, took two buses, and finally arrived. We were dropped off on a dirt road and were told to walk for about ten minutes and then we would find the actual town. It was truly rural Ecuador, complete with sheep, horses, mules, and farmers of course. Once we made it into town, we found our hostel and settled in. After that we got lunch, hammocked in our hostel, and eventually finished the night with dinner. The next day was when we were going to hike and on Friday we were very naive to what we were in for.

On Saturday morning we ate some breakfast then headed out at around 8:30 with our guide for the day, José. Our plan was to hike around the entire lake, but I don’t think any of us new how difficult it would be. The whole time we were hiking on the ridge of the mountains surrounding the lake, complete with steep inclines and declines, all while being at an altitude of 12,000 feet (3,000 feet higher than Quito). It was by far the most challenging hike of our lives. José was a pro though who was hiking like it was no big deal, all while wearing a pull over sweater and dress pants. He probably wasn’t the biggest fan of our group since we took a lot of breaks, but he hung in there with us. 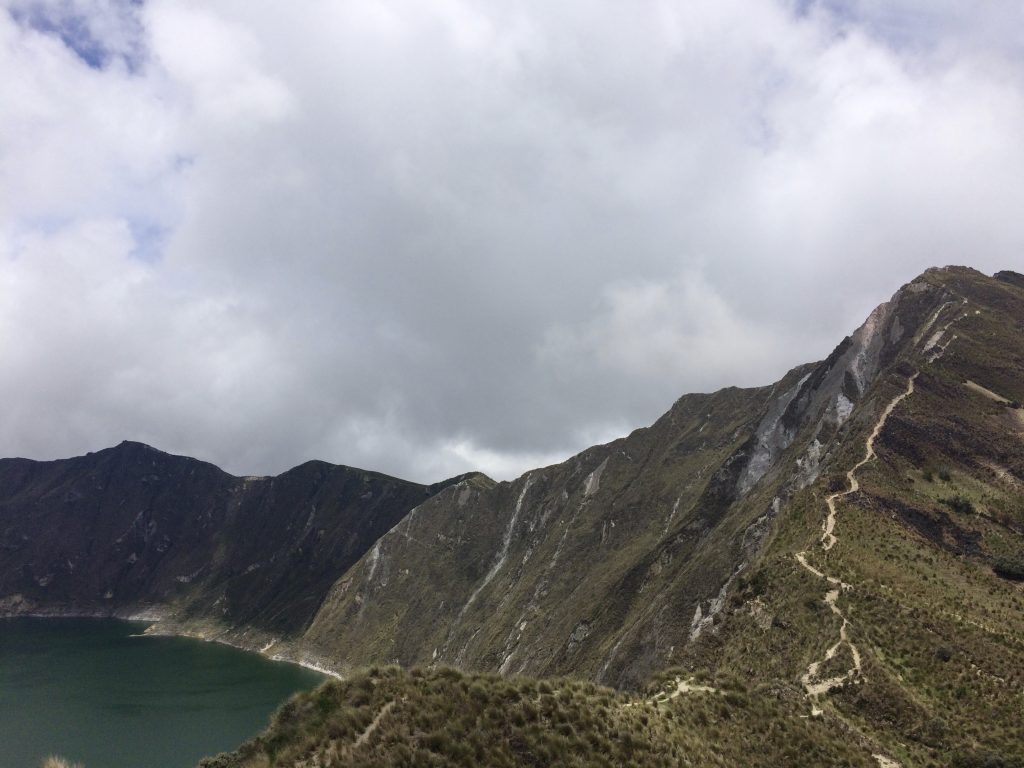 The most satisfying part of the day was when we reached the highest point of the mountain. Beforehand, we had the option to take an easier path or the more difficult one that was extremely steep and intense. We chose the harder option, and man was it exhausting, but when we got up to the top, we all felt so proud of the work our bodies had done and that we did what we set our minds to. Throughout the entire day, the view of the lake and mountains was incredible. Quilotoa is the most beautiful place I’ve ever been and even though the hike felt never ending (don’t worry, it ended after six hours), none of us regreted our decision to trek all the way around the crater lake. 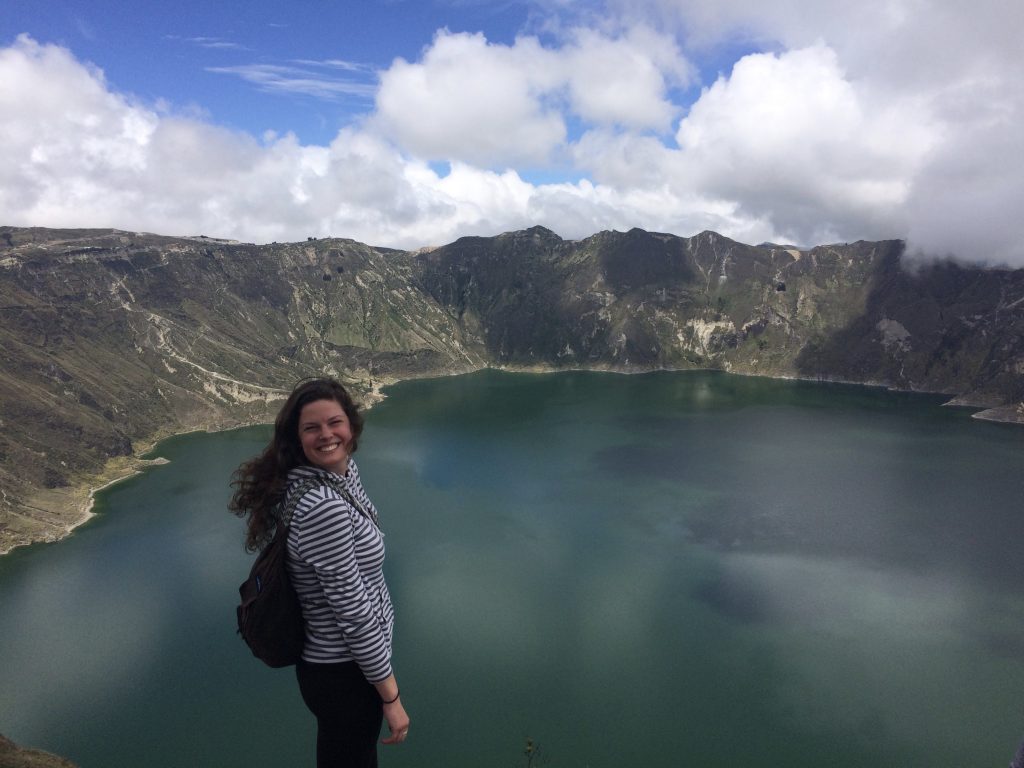 We joke that we all left a part of ourselves on those mountains because of the exhaustion and pain that came with the hike, and it might actually be true. We were completely drained by the end, but the satisfaction that came from hiking the entire loop together was a pretty wonderful feeling. So thanks Quilotoa, you were the worst/best hike and truly pushed me to my limits.

After we finally finished the loop, we headed straight to a restaurant for a late lunch because we were starving/a bit delirious after the long day on the mountains. Later we went back to our hostel to relax and sit in our sore muscles for the rest of the night. We left on Sunday morning after breakfast to get back to Quito and return to the homework that was waiting for us. It was so refreshing to be removed from the city and to be in the middle of nowhere. The air was fresher, the people were hospitable, and the views were unlike anything you could find in the city. 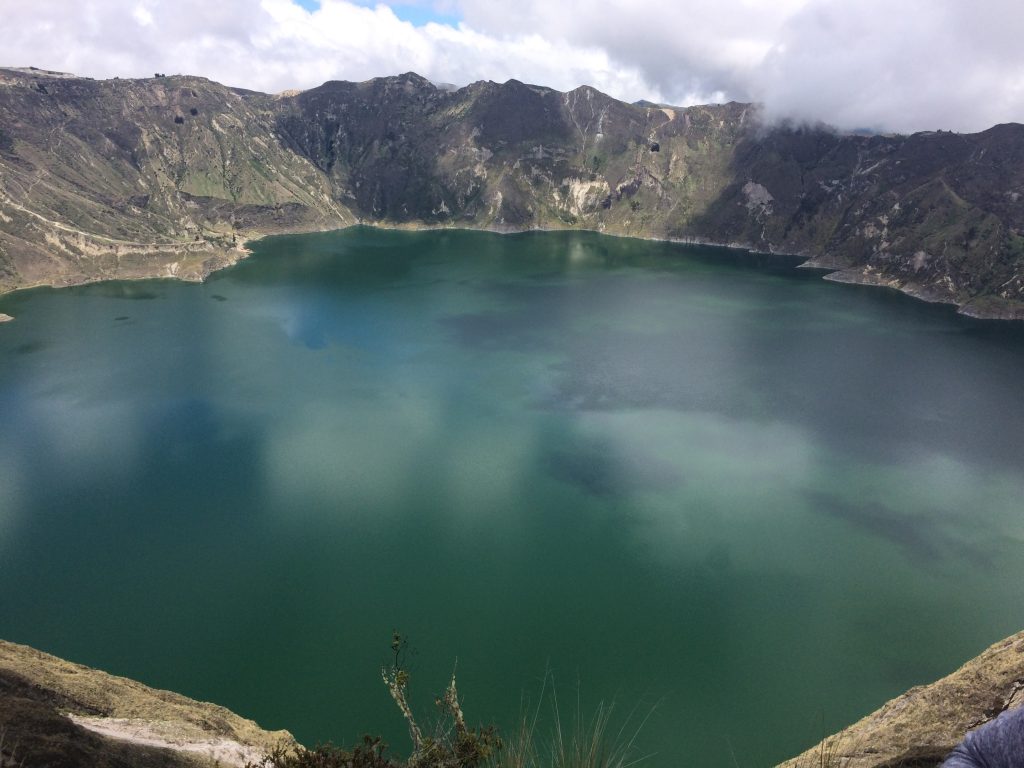 After this weekend, I feel empowered by what I can do physically and by the fact that I never gave up, despite the challenges that were constant. Sorry to be cheesy, but you really do learn a lot about yourself out in the wilderness when you don’t have any choice but to move forward. Quilotoa, you were very good to us, even in the moments when we hated you just a little bit.