Aside from the San Pedro homestay period, there has been little time for extracurricular exploration. But then Easter heralded the arrival of Spring Break, whereupon all the students got booted out into the great unknown and were told to not bother anyone for a week.

Seven friends from the program and I have decided to stick together, so our merry band is adventuring across Costa Rica as per usual—just now as tourists, not students. Because we have all been subjected to lectures about tourism’s negative impact in Costa Rica, we’re steering clear of the large beachfront hotels that use inordinate quantities of water and destroy local ecosystems. Instead, our little group is sticking to small eco lodges that work to reduce their water intake and manage their waste responsibly. To the customer, the main differences are limited air conditioning, smaller rooms, and a broader set of waste disposal bins with more specific labels. A small price to pay for a big impact! It’s also perfect for the broke student traveler; we’ve stuck to places that are between $10-15 per night, with (reliable!) wi-fi and breakfast included.

Our first stop was La Fortuna, (Fortune) a small tourist town in the shadow of Arenal Volcano. According to a local guide, the name comes from the fact that all of Arenal’s activity has been on the other side of the mountain, and so far the town has had wonderful luck in not getting scourged away by lava.1  The neighbors have not been so fortunate; the towns of Tabacón, Pueblo Nuevo and San Luís were obliterated in a devastating 1968 eruption. Thankfully, the monster recently grew tired of spitting fire and has been snoozing since 2010.
Though nobody is allowed to visit the rim, we hiked around Arenal, swam in a few lagoons, jumped on hanging bridges, and generally took in the sights. I can’t say that I’ve ever had a spring break quite as adventurous as this one. Click on the photos below to expand them!

Ferns reproduce through spores, which sometimes grow in clusters like these, called “sori.”

These claw marks are probably as close as I’ll get to seeing a jaguar. Given how deep and wide-set these are, I am quite content with the distance.

Later in the week we made our way to Montezuma beach, where the Nicoya Peninsula juts into the Pacific Ocean.

Once evening fell along the coast, we began to encounter bright purple and orange halloween crabs (Gecarcinus quadratus) by the thousands. When their hordes skittered through the dry leaf litter in search of shelter and food, their rustling drowned out even the roar of the Pacific surf. There is nothing to fear unless you are a farmer—though a few tried to taste my bare feet, they mostly subsist on seedlings and other vegetation. 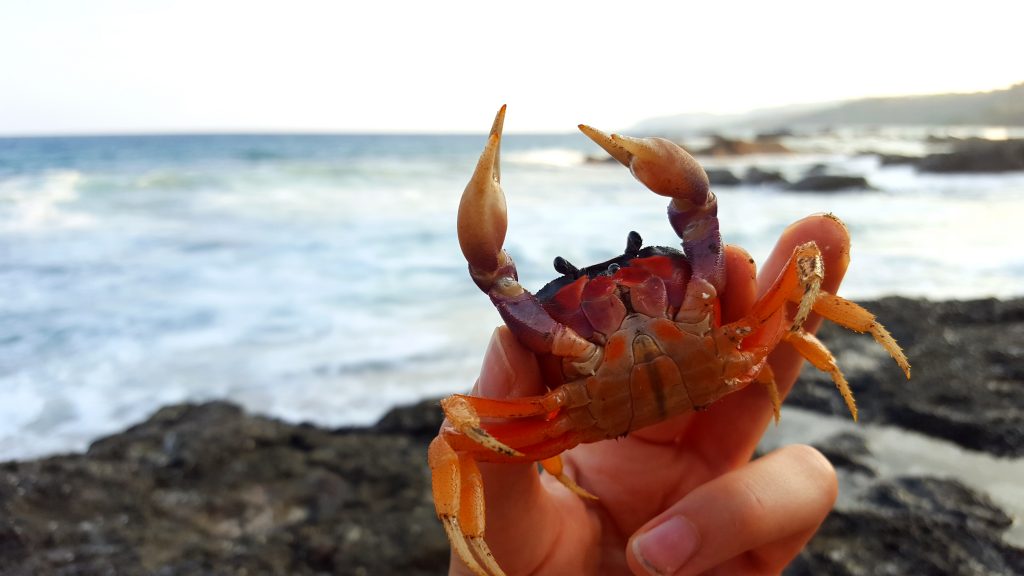 I managed to snatch this one for a closer look, at the peril of my fingers. See that bubble? This halloween crab can extract oxygen from the air using two methods: either by routinely passing seawater over its feathery gill lamellae to keep them moist and salinated, or by switching to a pair of inflatable chambers lined with haemolymph vessels which oxygenate the heart in much the same way that our lungs and blood do. Not all crabs are capable of both, but halloween crabs belong to the land crab family (Gecarcinidae) and have specially adapted to life above the shoreline. Which method do you think it is using now?

They’re quite diligent workers, too. Several hundred of them were busily digging burrows along the shore, likely in preparation for breeding. This one showed particular architectural care, as he would vanish deep beneath the surface for minutes at a time before emerging with a new armload of sand.

I had better be off to prepare for the next leg of the semester, but I leave you with some more photos. Until next time!

This hermit crab has nearly outgrown his shell, but he still expertly folded himself away when he disliked my attention.

His courage returned to him.

A last look at the beach.