I know this is a long one, but last weekend I went on my first travel weekend out of Beijing!  15 other students from my program and I went up North to the city of Harbin, which is closer to the Russian border than to Beijing!  We took an all night train Friday night and arrived bright and early on Saturday morning and OH MY GRACIOUS IT WAS SO COLD (negative temperatures Fahrenheit .  I unwisely didn’t put on all my underlayers on the train, so I was shaking as soon as we got off!  One thing about traveling with 15 other people is that you end up waiting around for each other.  I was still groggy from sleeping, and we were trying to find each other to get cabs together to our hostel and I was under dressed, but fortunately this was the most unpleasant time of the trip for me.

I went into the bathroom to change at the hostel and left my backpack and such right outside the door, to come out of the stall to see an unfamiliar woman digging through my stuff, like had my wallet open and was thumbing through everything.  Chinese utterly failed me.  “What are you doing?  That’s my stuff!  You can’t do that!”  I then yelled for my friend who can speak Chinese and she thankfully came in right away.  It turns out I had left my pile of stuff in the place where guests leave things that they want to give away (there was no sign explaining this that I saw), and the staffer had been seeing what was up with it.  I then felt really bad for overreacting and we both apologized profusely to each other.  The sight of an unfamiliar person going through your wallet is a lot more unnerving than you would think!  However, the day only got better from there.

We split up into groups, and I and seven others went to Snow and Ice World, the largest snow and ice park in the world.  Its most famous lit up at night, but we decided to save some money and see it in the day.  I was not at all disappointed.  There were so many ice sculptures and we basically had the park to ourselves because it was daytime.  There were ice slides, tubing, ice biking (exactly what it sounds like) and a Chinese thing where you basically sit on a chair that’s mounted on a sled and push yourself around on the ice with poles.  Running around doing things and taking pictures with the ice sculptures helped us stay warm too! 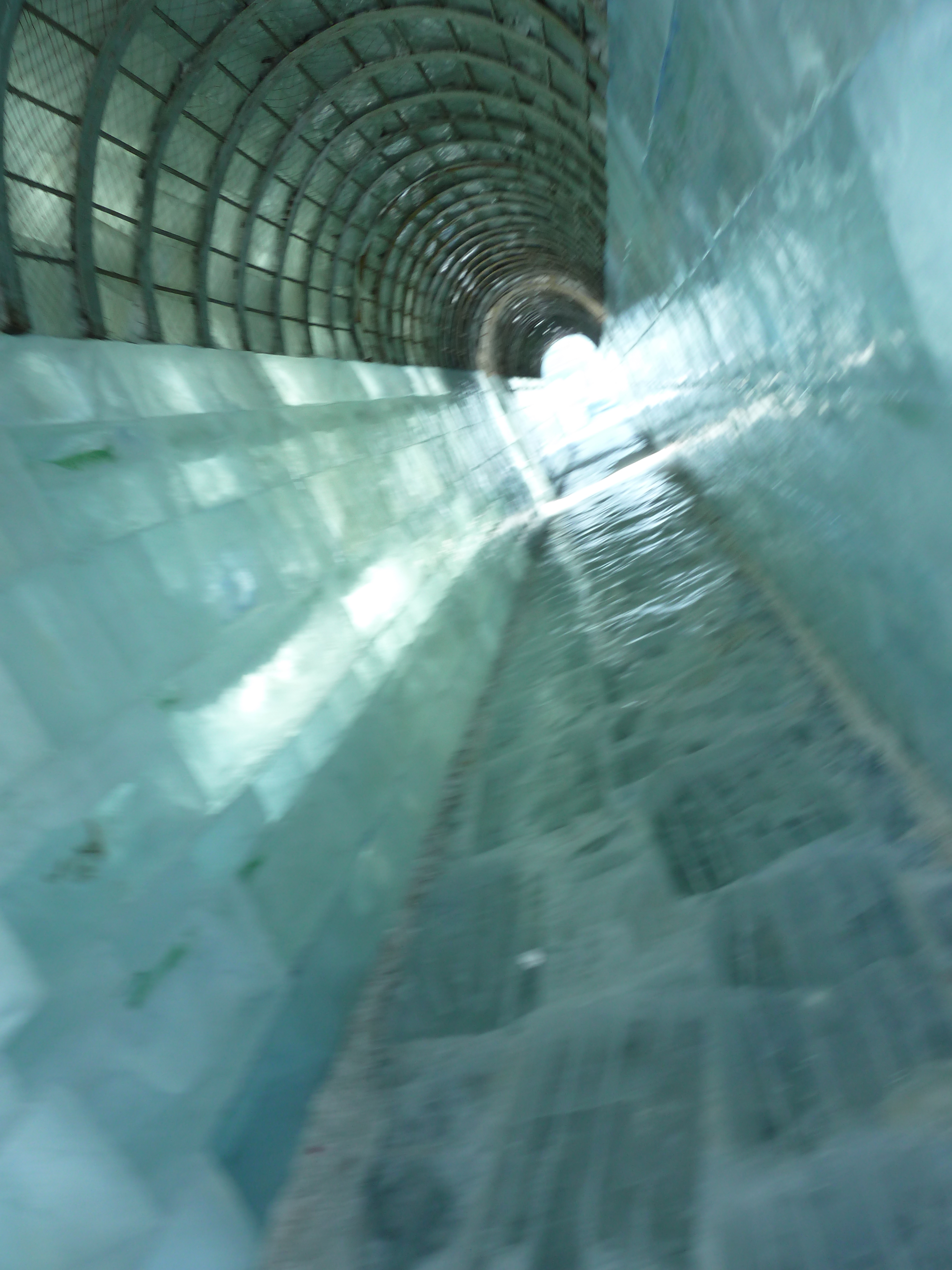 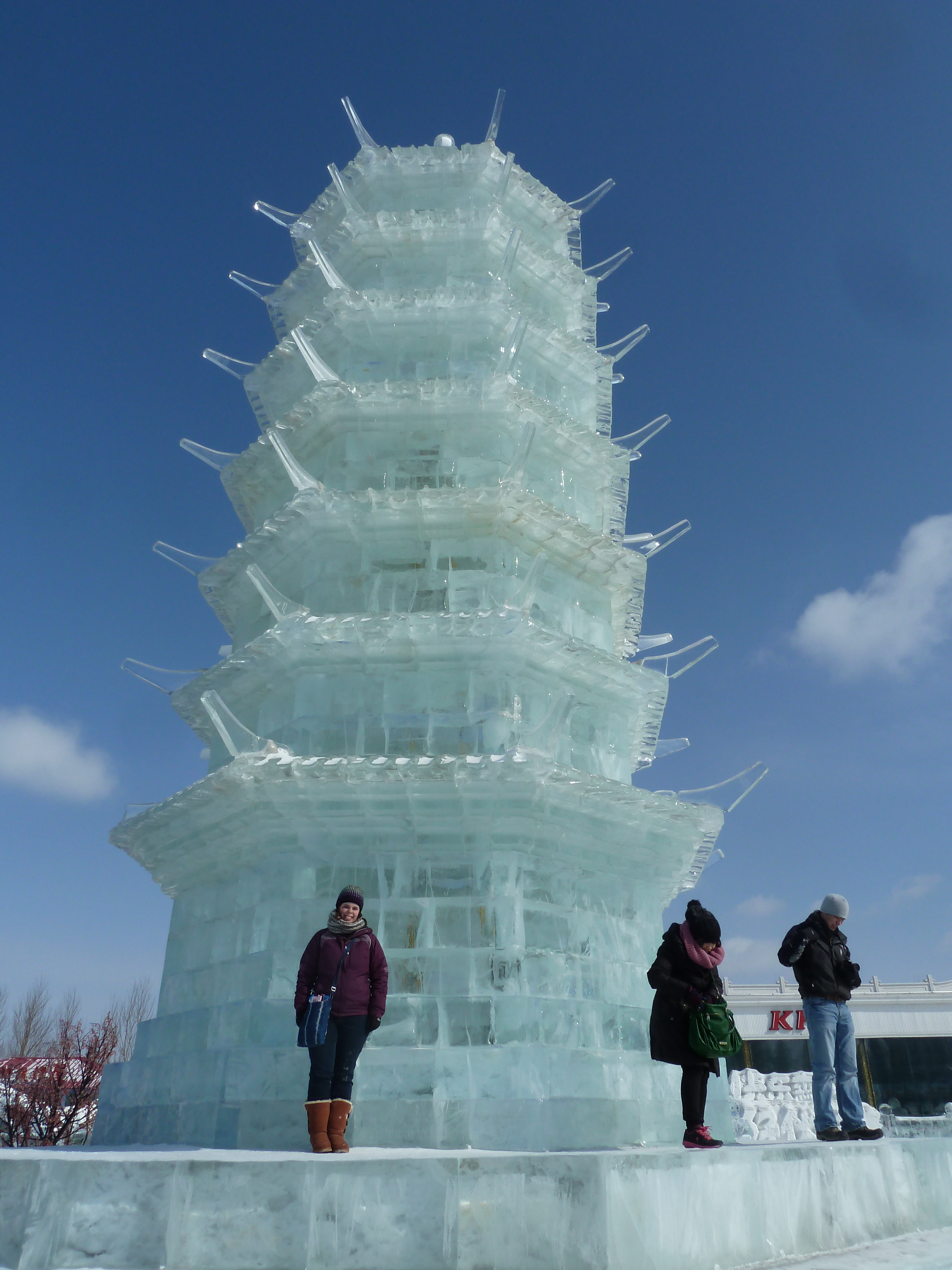 All bundled up with the ice temple! 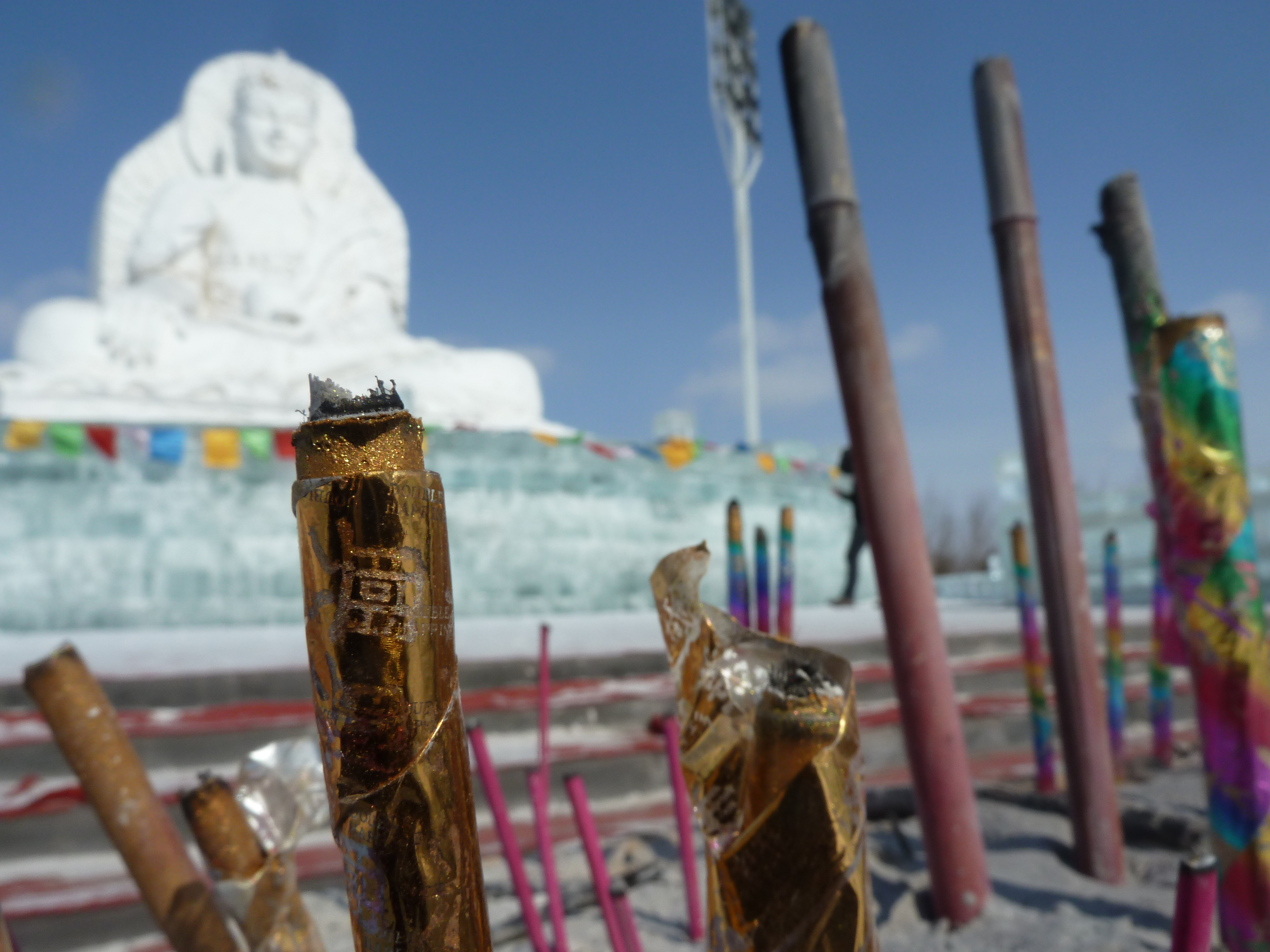 We headed back to the main shopping street in Harbin and walked around the shops and had some lunch.  I really wanted Russian food but the only place we could find was way too expensive and people needed food so we had Chinese fast food, which is pretty tasty though available in Beijing.  No complaints though.  The Russian influence was really clear in this part of town, for it definitely felt very European to me.  Buildings weren’t skyscrapers which was a nice change from Beijing!  We then went to St. Sophia’s Cathedral, which was gorgeous!  My favorite part was the flock of birds that kept flying around the top and then landing back on the roof, over and over again.  It was captivating!  It was really neat to see a testament to God’s work in China over the years and the beautiful way that He made those birds to fly around. 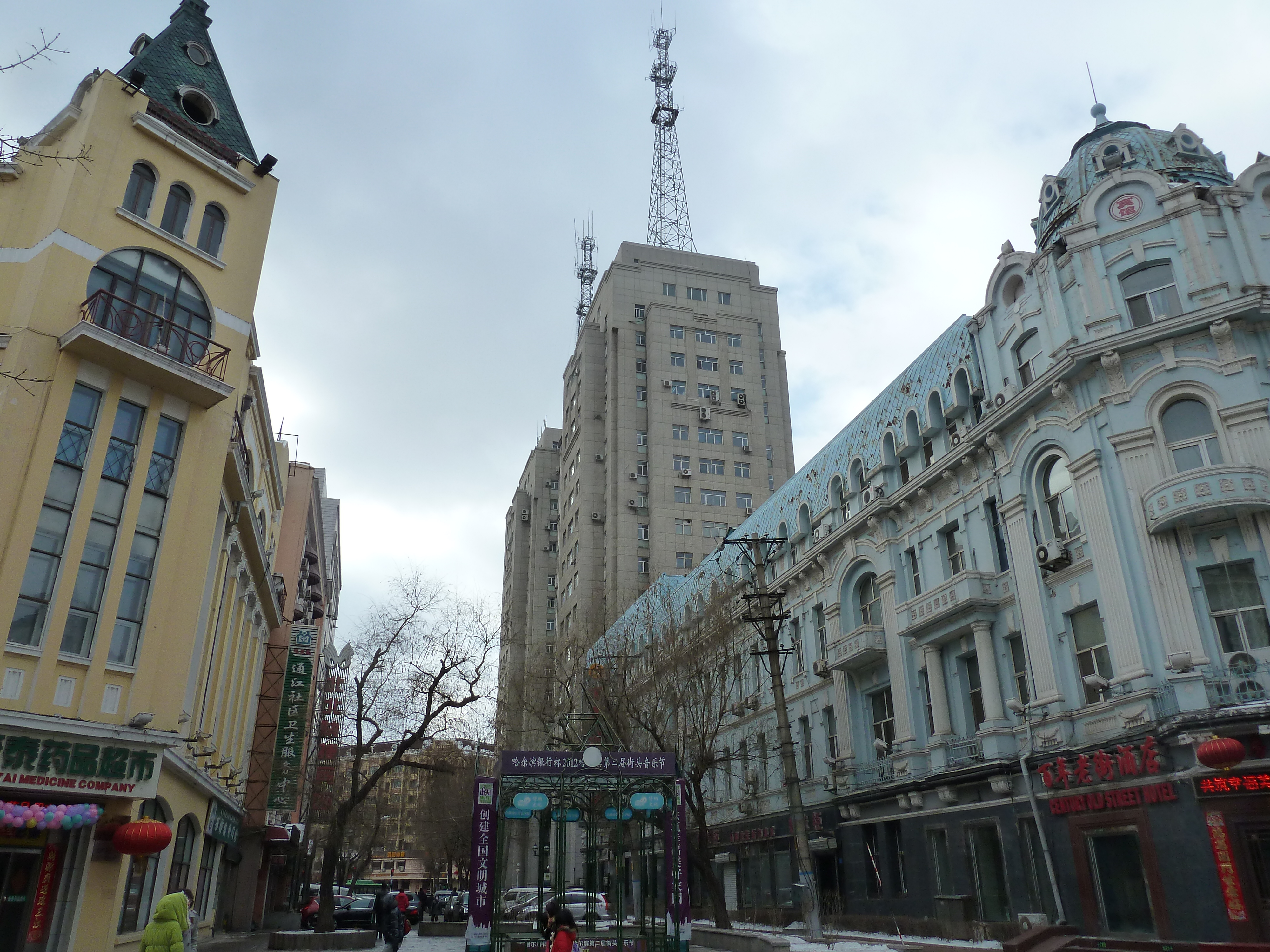 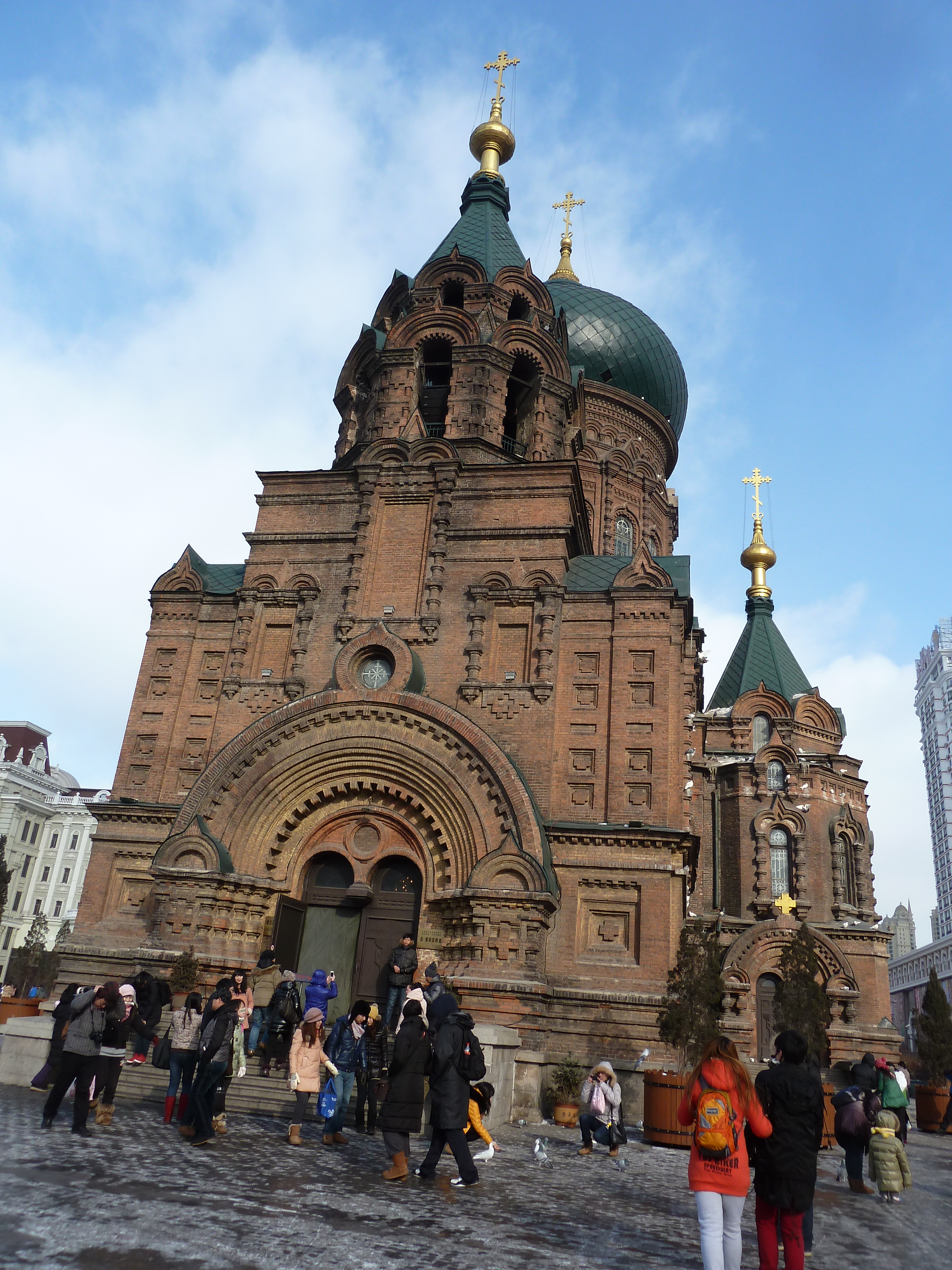 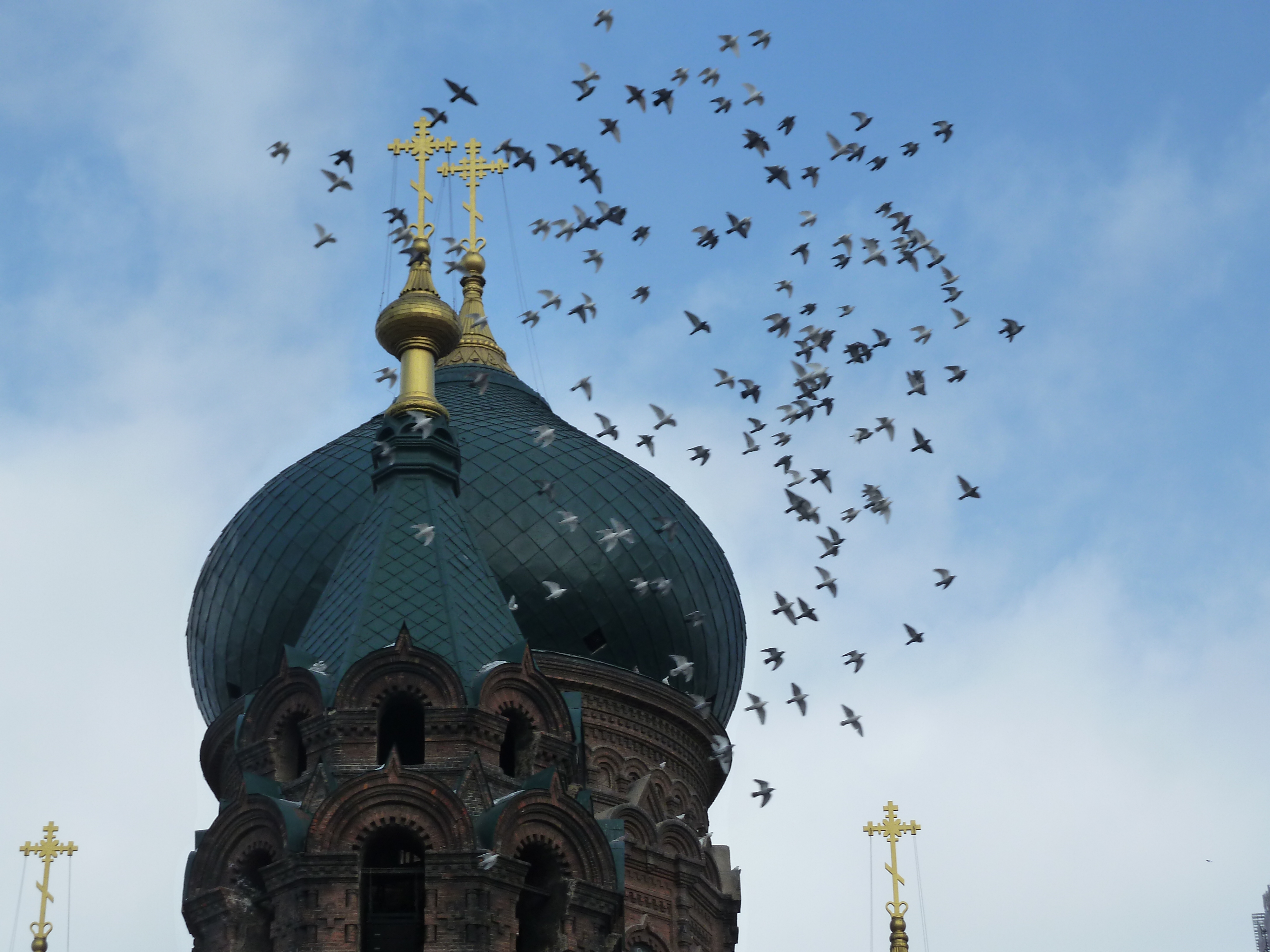 We went to see another park’s sculptures all lit up.  Highlights include admiring the craftsmanship of the sculptures, falling off of a sculpture, and the wonderful meal that we ate afterwards.  We had a girl who is nearly fluent in Chinese order for us and I had the best eggplant I have ever had in my life.  It was cooked in some sort of savory soy sauce thing… I will never forget that meal.  It was a great group of people and the restaurant gave us a private room with a giant round table with the lazy susan so we can all take from each dish.  It really creates a sense of community that I absolutely love.  We talked, laughed and ate some awesome food before heading back to the hostel for a chill night of talking and hanging out. 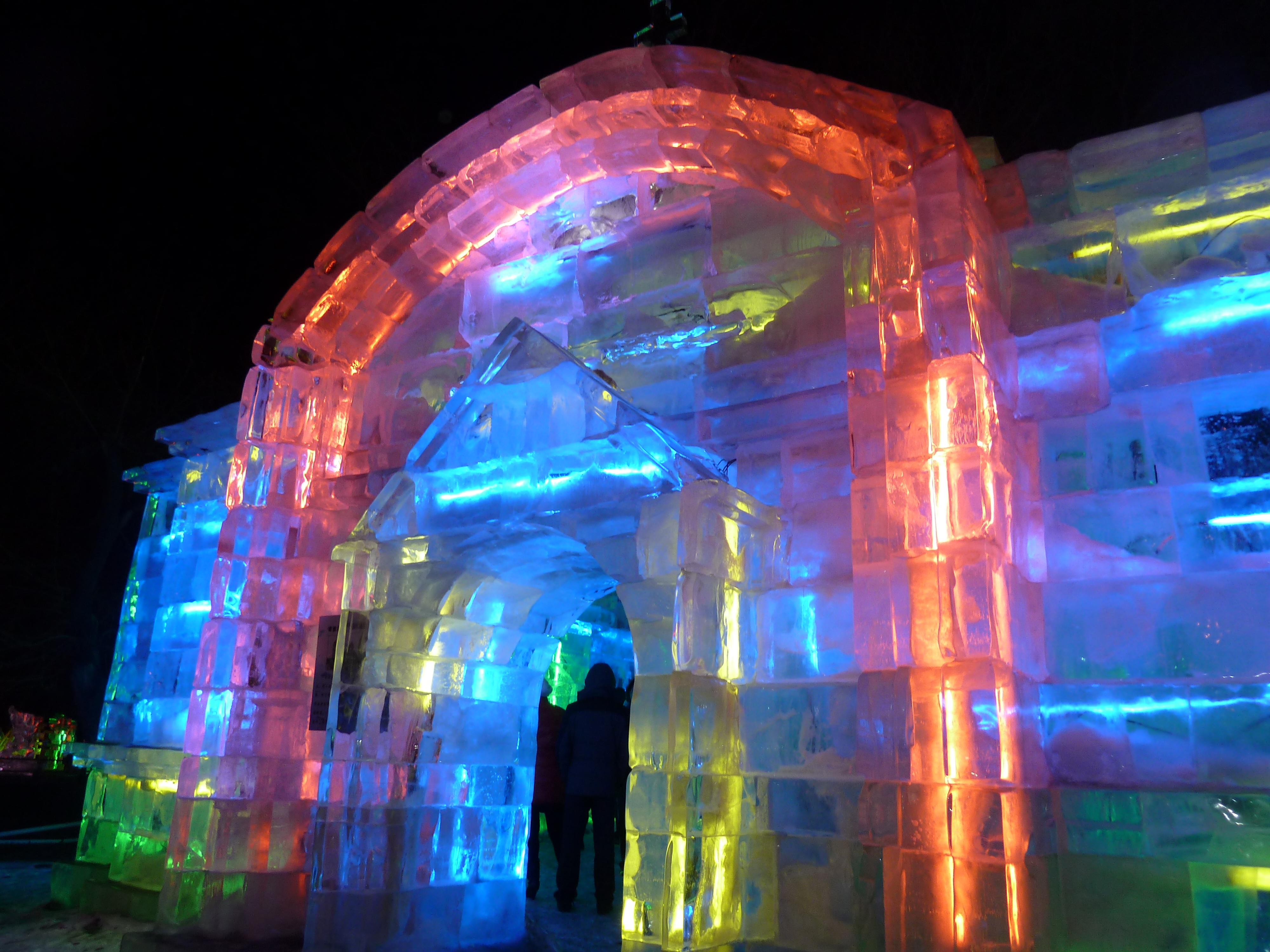 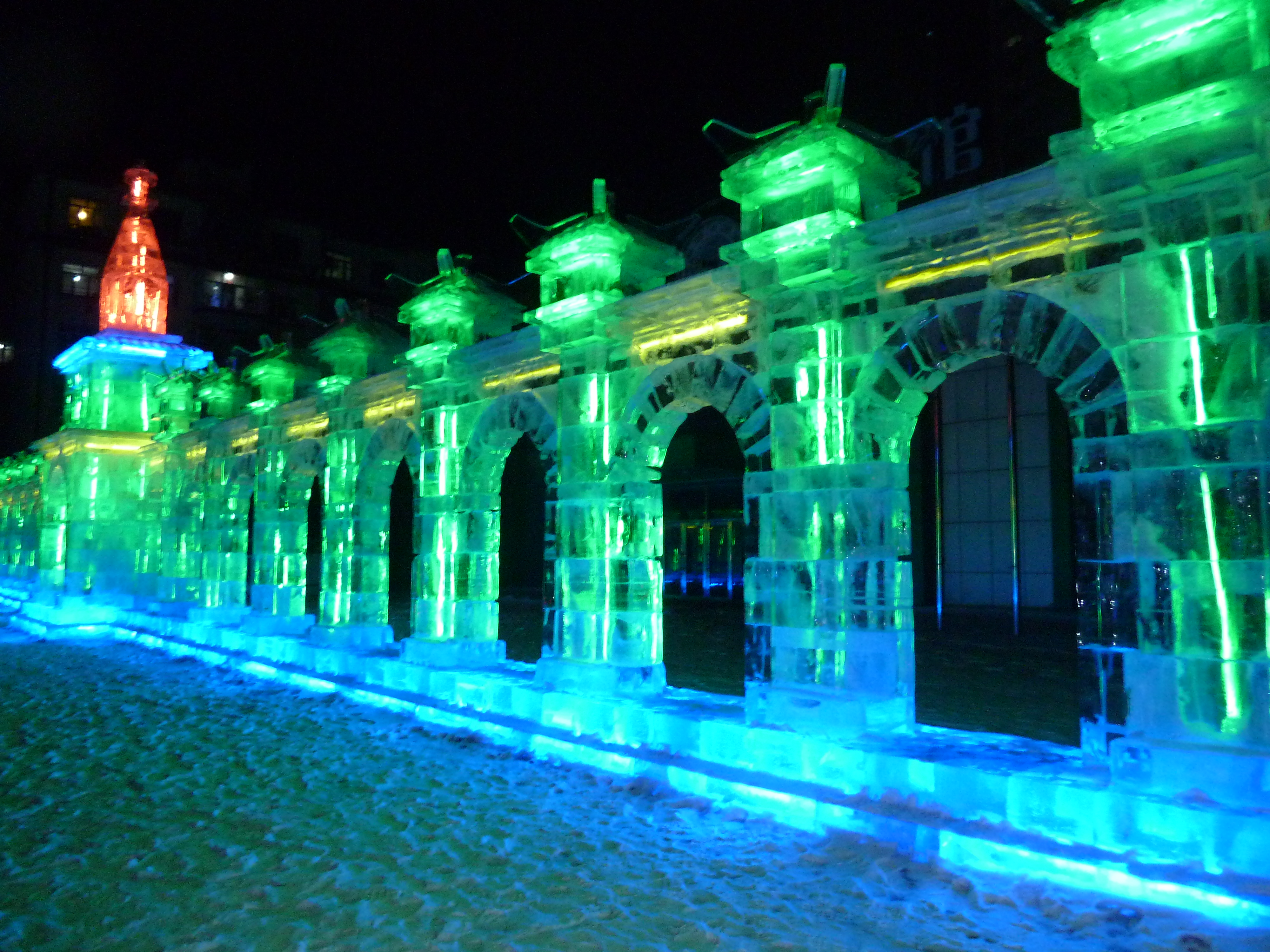 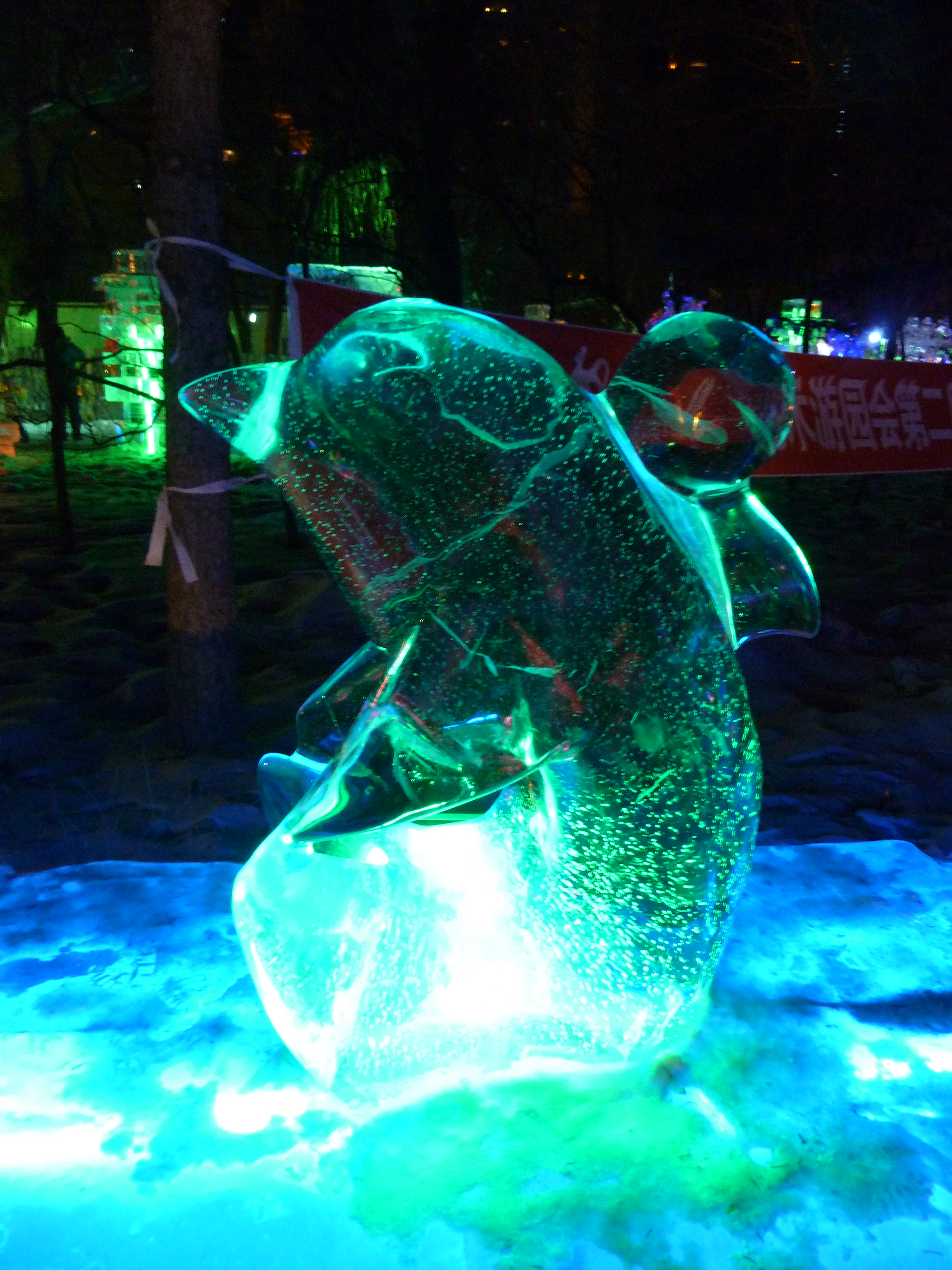 The next morning my friend Mykhanh wanted to go to Catholic church and I said I would go with her.  There were three churches on the same corner!  The first one was an Eastern Orthodox church which we basically just walked in and out of.  Then we went to the Catholic church and ended up going to mass in Korean… why not right?  It was the first service that we found and they welcomed us warmly, not that we could understand a word.  Then we went to the second half of a protestant service in English.  It was such a fun morning and God delighted us with an adventure seeking Him!  It was time to head to the train station and go home after one last walk down the main street for our favorite street snacks, but it was a great weekend!

I love the thrill that comes from seeking and finding adventure.  I love that God is who He is no matter where I am, and I’m learning more and more about walking in Him wherever I go.  I love that I am so free here, to just buy a train ticket with 15 friends and go explore somewhere, to laugh and enjoy and slide down ice slides and expand my view of the world just a little bit more.