Yesterday I went on an anticipated three to four hour hike that turned into a seven hour hike. You know, you just can’t rush when you are going along. There are so many things to look at and so many different things to climb. I went with another student, Luke from Indiana, and I tell you what- we had no idea what we were getting ourselves into. Luke had ‘mapped’ out the hike to a supposed hidden, secretive gem of Cape Town that we thought would take about two hours to get to. After about four hours of hiking, we realized how comical the directions online really were (ie. ‘Once you reach a set of jagged-looking rocks, turn left onto a faint path and walk approximately four minutes). Perhaps an experienced mountaineer would have fared better, but everything sort of looked the same to us. Regardless of never actually finding said ‘secretive gem’, the whole ‘path’ we were on was absolutely incredible.

Luke and I kept commenting that even with the best camera it would be difficult to capture some of what we were seeing. At one point, when we were climbing down next to a stream, the wind was was lightly blowing the rain water off of the mountain and as the sun was shining down it look so beautiful- I had never seen anything like it! I have had the conversation a number of times with friends that within nature is where I feel most human yet this feeling became even more apparent yesterday. There is just something right about being able to hear the birds chirp, the water flow in the distance and your own heart beat as you work your way up the mountain; something about being able to drink cold, fresh water right off of the rock that makes me feel I am where I need to be. 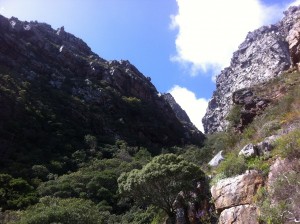 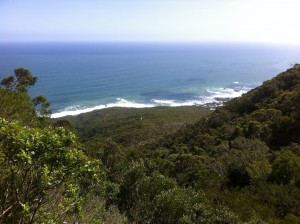 The two photos above were taken when we started to get closer to the top of the mountain. It was amazing- in the entire seven hours that we hiked we only saw one person! It was so quiet and peaceful! There are so many great places to hike around Cape Town and I want to explore as many as I can before I leave!