After an action-packed last day of the conference where we were able to showcase the projects and discussion that we were having in our learning tracks, spend some last meaningful moments with new friends, and have the most incredible dance party I have ever been a part of, we all got up and gathered to go into Liverpool for a day of exploring. 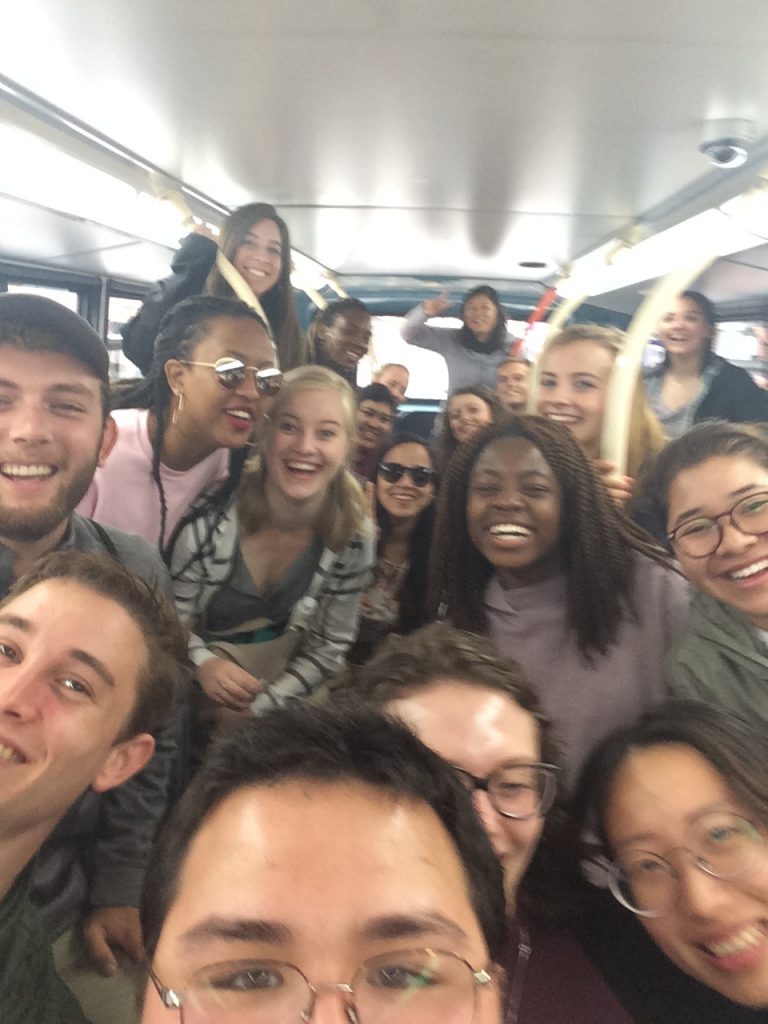 We said some last goodbyes at the entrance to the school, and then walked to the bus stop. Many of us had the opportunity to meet and get to know a student, Jason from China, who walked with us all the way to the bus and waved goodbye as 20 Americans filed onto the top of a double-decker bus. He was just one of the many people that we got to engage with from all over the world and will be someone who we talk about as we see each other around campus, sharing memories and laughs as we recall this week for a long time to come.

We arrived in the center of the city of Liverpool and all split off to see different parts of Liverpool that interested us. Many of us started the day at the Albert Docks, which instead of being torn down were converted into a center of town with world class museums, including the International Slavery Museum and exhibits on the Titanic, Lusitania, and smuggling people and products across international borders. After filling our minds, we decided that it was time to fill our stomachs, and I joined a group of people that was headed into the city to find some cheap ethnic food! We settled on Lebanese food, and smothered our plates of meat, bread, and French fries with copious amounts of a tasty garlic sauce. 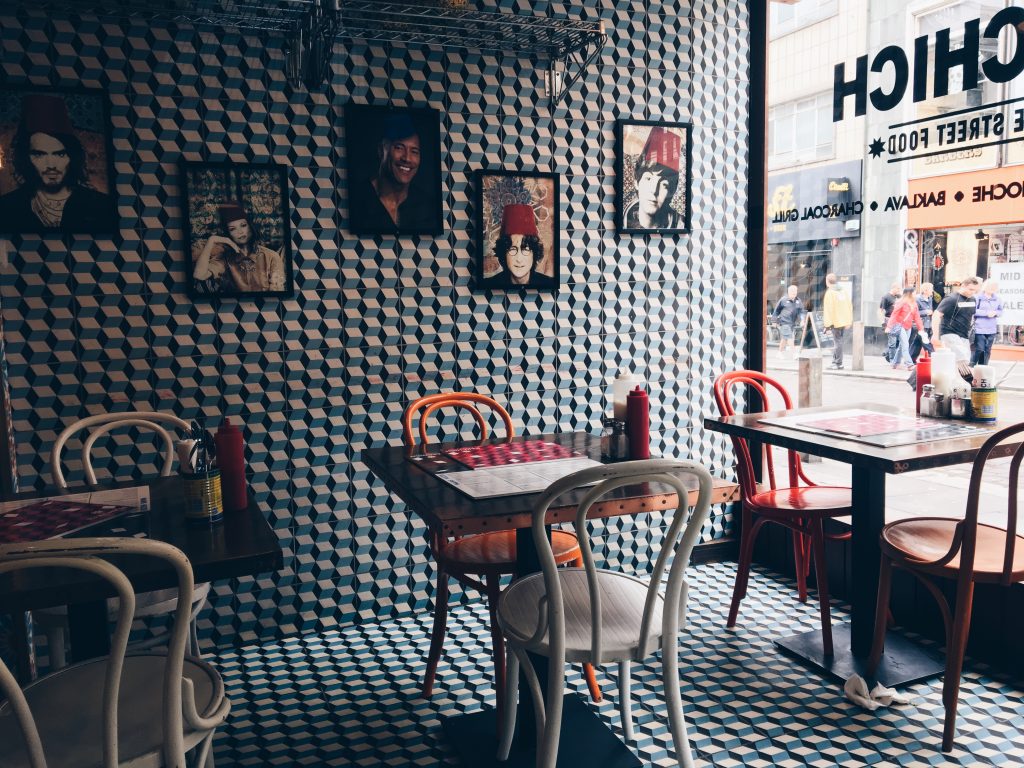 After our delicious lunch, we headed to a part of town that was known for its architecture, which looked more stereotypically European than much of the town where we had been. It housed the older museums in Liverpool and the public library. On our way there, we ran into some people who had set out tables on the street, offering free coffee, tea, and various sweet treats to people passing by. We stopped because, well, we’re college students who were offered free coffee; what can we say?! We placed our orders and talked to the men who were providing the food. Finally as we were getting ready to leave, Ethan (who is shown third from the left in the picture below) said that they were from a local church and that they wanted us to know that we are so loved by God. That started a conversation going and we talked to him on the street for a while. He offered to pray for us and we asked if he would pray for safe travels home the next day. We stood together on Bold Street, warmed by cups of coffee and tea, and asked God to protect our group as we traveled back across the ocean. Ethan wished us goodbye and reminded us again that we are each so loved by God as we parted. We smiled as we walked away and I was reminded that God’s vision for the church was for it to be global. It was so cool to be connected, even if briefly, with Christians across an ocean who are being the church by loving their neighbors and total strangers. 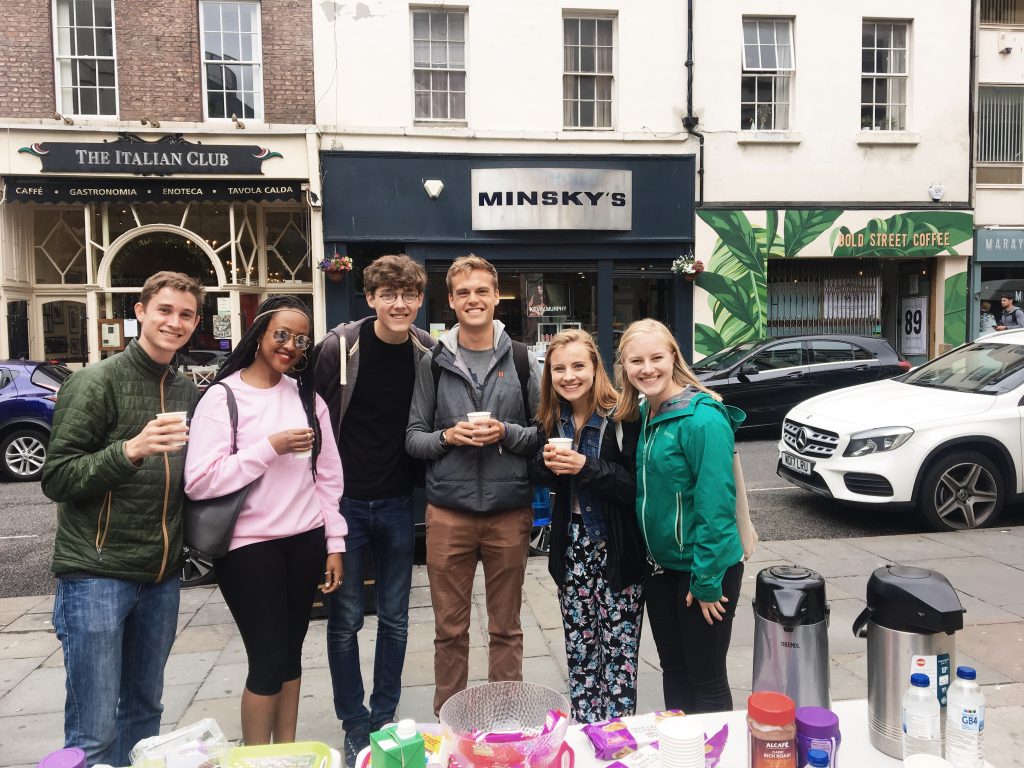 As we continued our walk, we joked and laughed as we impersonated sculptures, were surprised by the architecture of the gorgeous public library, and enjoyed the opportunity to just explore older parts of the city. There was one prominent building in the center of the square which we had not been able to the find the entrance to. Out of sheer curiosity we kept looking around to find the door and when we found it, we slipped in. There were only two options once we entered the building; to follow the path we knew nothing about or to leave. Naturally, we chose to continue. 😉 We turned a corner and ended up in a dimly lit hallway that had some informative signs on it and a couple adjoining rooms open to enter. One by one we looked at each other, realizing that we were in an old prison! A few minutes later, the damp cold, punishment devices, and stark cells had gotten to us all and we continued our self-guided tour further into the massive building. As we followed the one-way path, we were taken up winding staircases, through courtrooms, down hallways, and eventually into an incredible Great Hall! This is one mistake-turned-adventure that I will not forget soon.

As we made our way back, we popped in and out of vintage stores, coffee shops, and bookstores. We met up with the rest of our group and all headed to a Moroccan restaurants for dinner. I’m not sure if they were prepared for 25 Americans but they provided a space for us to share stories from the week, eat great food, and spend some quality time laughing before we all split up to say goodbye to other students and finish packing. 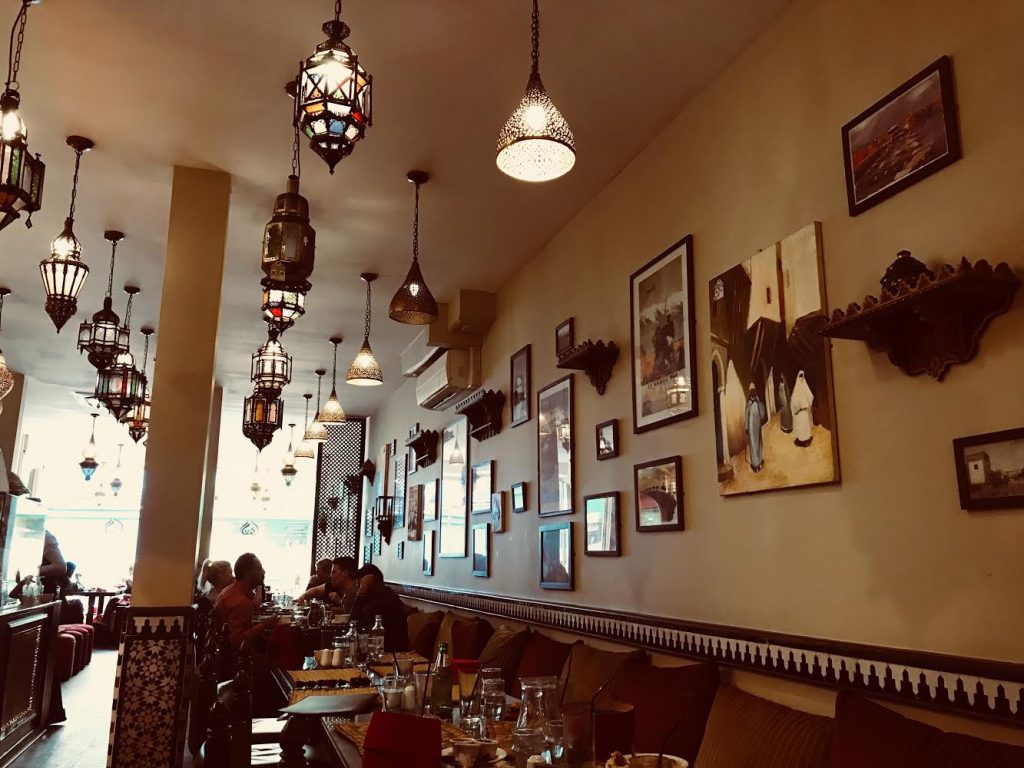 After a long and exhausting week of being confronted with hard questions where it seemed that there were no answers, this was a rewarding day spent reconnecting with other Hope students and spending time around Liverpool. This surely will not be a week that we forget soon after we return because how can we? We were confronted with people’s stories who were not just brought to us through a screen, but that were actually in flesh and bone, sitting in the chair next to us. Stories of arranged marriages, stories of people living in places of unrest, and stories of people from places of extreme poverty and extreme wealth. And there we were. 25 Americans. 25 people with stories of their own to contribute to the conversations and wow, there were many. So we did what we were invited to do and we invested in the people and the conversations happening around us. One day, I sat in a discussion forum where we were invited to ask questions and I smiled to myself as almost every person who took the microphone to ask a question started with, “Hi, I’m _______ and I’m from Hope College.” I watched and experienced frustration with cultural barriers. I belted out “All You Need is Love” in a huge circle of people from around the world in the city of the Beatles (the blog post title is a nod to this song). I watched dance moves and songs from 40+ countries get shared. I watched belly laughter and serious conversations and tearful goodbyes. But I was left with this. We are people of Hope. Not only is it our school name but it is our desire; to see Hope shared with hurting people and in hopeless situations. So as I discussed tough issues, met new people, and as I process what all of this means now that I am home, I am encouraged knowing that Hope was woven through it all. I have Hope, Big Hope.

And now these three remain: faith, hope, and love. But the greatest of these is love. — 1 Corinthians 13:13