Hello HopeTV, and welcome to my crib

Many of my fellow international students were forced to find affordable hostels in sketchy parts of Chinatown. Meanwhile the TEAN program ensured its programees a three-bed, three-bath in the illustrious multi-purpose complex that is Sunshine Plaza. The moment I entered the room, I knew I had scored the jackpot. 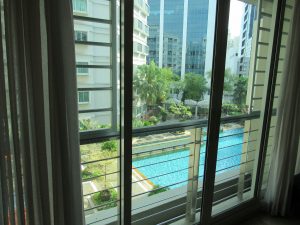 My three other housemates and I were situated on the seventh floor with a patio window facing a large wave pool, complete with a waterfall design and a jacuzzi (although it didn’t actually heat up; it just made bubbles). All utilities, electricity, water, and AC, were paid for by TEAN – we only had to concern ourselves if the AC usage went over budget. Otherwise, we also had our own washer and dryer. The living area was sort of separated into three spaces: a desk area near the door, the dining table, and the area with a TV, two modern-style couches and a coffee table. Considering the beautiful view, which effectively opened up the room, I’m not one to complain about the not-so-spacious living arrangement. Besides, it was the perfect amount of space for four residents.

When they told us not to overpack, I should’ve listened.

TEAN uses this apartment for every group of visiting students so either past students or our beloved RD have left kitchen appliances like a toaster, a coffee maker, and a water kettle as well as bowls, plates, utensils, knives, pots and pans, measuring cups, a water filter pitcher, a dish rack, and whatever else a kitchen could have. We later went out and bought a rice cooker to add to the growing generosity of kitchenware. There were already two cartons of milk in the fridge and some snacks including laksa-flavored ramen, green tea Kit Kats, and Oreo straws in the cupboards and on top of the microwave.

Out in the living area, a closet was filled with other miscellaneous items like an ironing board, an iron, a vacuum cleaner, another lamp, and even spare cabinets (although some were broken). A desk against the wall at the entrance also had spare notebooks, adaptors, pencils, pens, paper clips, and so on.

Our rooms were also decorated and maxed out with supplies. On our beds, they had lain out a body towel, a face towel, more Singaporean snacks and treats, hand wipes and tissues, and a welcome note from the RD and RD’s Assistant. In our wardrobes, they gave us each our own clothing hampers and hangers as well as extra pillow covers. In our bathrooms and underneath the sinks, we were given cleaning supplies, sponges, and soap, and we have both a tub and a shower area. Just had a nice hot tub session, and I can say it does wonders for neck pain.

In addition to the supplies, appliances and fully furnished rooms, TEAN also invested in some minimal interior design; fake plants, paintings, fancy lamps, and even an Asian conical hat decorated the walls and tabletops.

The building itself, as I said before, is multipurpose, which means while it is an apartment, it also has office space, and at the ground floor, Sunshine Plaza boasts its own mall. If you walk around the block, you’ll find restaurants and general stores in close proximity. It’s also about a two- to three-minute walk to the blue line, which goes almost everywhere, and the yellow line, which will take you to some tourist destinations but more importantly Suntec Mall where you’ll buy groceries and school supplies, visit the post office, and attend to other daily needs. From Sunshine Plaza to SMU, it’s about a five- to ten-minute walk depending on which building you’re heading to and how long you have to wait at each crosswalk.

Now these are the good aspects about the apartment, which I believe greatly outweigh the negatives, but I feel like the negatives should be made known for future students’ benefit.

I share a room with a wonderful roommate, but I did come second and got second pick when it came to beds and wardrobes. One bed is slightly raised and has a backboard and some cabinet space attached to the side. The bed I ended up with, on the other hand, was more like a glorified cot. I could feel and sometimes even see the coils and springs. A few days into my first week, I had to borrow a mattress pad from one of the other rooms due to the morning back and neck pains (hence the hot tub sessions). 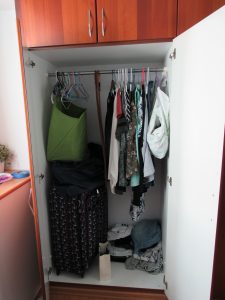 Moreover, don’t bring or buy a lot of clothes. We do have wardrobes, but while one of the wardrobes does have a little bit of storage space, the other only has hanger space (guess which one I ended up with). I had to fashion my own storage space using plastic bags and a hanger. The rooms are pretty small, so they recommend bringing only one luggage bag. As for the other two rooms, one room is possibly larger than the master bedroom that I was in, while the other is more akin to a closet with two beds jammed inside. Harry Potter wouldn’t envy it. In other words, first come, first serve. We do get the option to switch rooms halfway through the semester, but that’s up to the residents.

The kitchen area and the bathrooms open up to Singapore, so we always have to close the doors to these areas in fear of wasting precious AC. This isn’t so bad, but it’s staying in these places for a long time that will leave you panting and sweating, especially when the steam from cooking or showering adds to the hot, humid air. There’s limited kitchen cupboard and refrigerator/freezer space (don’t buy too many groceries) and not a lot of counter space for cutting vegetables or other cooking needs. The washer and dryer, which are adjacent to the kitchen, are also tiny. They can only wash about a half-week’s worth at a time and both squeal like tortured squirrels if you try shoving in more than they can handle.

And while the open window to the pool area is nice, you might accidentally make eye contact with a neighbor from across the way who also happens to have a patio facing the pool. In fact, you might make eye contact with several neighbors… The first few days are uncomfortable and awkward but you get used to it the more you live there because the residents mostly mind their business and don’t care if you’re watching National Treasure at twilight hours.

With exception to the few nuisances, the first few weeks living in Sunshine Plaza has been something of a resort vacation. I only remembered I was studying abroad, and not just abroad, when the first week of classes hit.