This week I was given the opportunity to attend my first Indian wedding. I have been looking forward to this for weeks. The wedding was on a Wednesday which was interesting because most weddings that I have attended happen on weekends. Since I do not know how to put a Sari on I had to have some of the neighbors come over and help me. I was expecting 10 minutes of them helping me get dressed and that being it. Instead they fussed over me for about an hour. Everything from what earrings I should wear, why I didn’t have makeup with me, and trying to explain that you cannot brush curly hair. I left the house around 8pm to go to the house of the groom. There was no questioning where it was because the music could be heard from very far away. I was only there for a few minutes before to procession started. The wedding takes place near the bride’s house so there is a whole ceremony to transport the groom there. Outside of the house was a full band (think marching band) playing as loud as they could. The whole groom’s family goes out onto the main street where a car, decorated in flowers, is waiting. The groom gets in the back seat and everyone crowds around. From what I observed I think all the older female family members gave offerings and said prayers with him one by one. While this is going on everyone else stands behind the car and dances to the music. Then we start going down the road, stopping every few minutes to have a mini dance party. This is essentially a parade going down the road even though the road is not closed. It was crazy but everyone seemed to be very respectful of letting us through. After walking for about 20-30min we arrived at the ceremony location. All along the perimeter are tables with various kinds of food. At the front there is a stage with a couch on it. The setting was very informal. I didn’t even notice when the bride entered because there was no announcement of everyone to rise like I was used to. 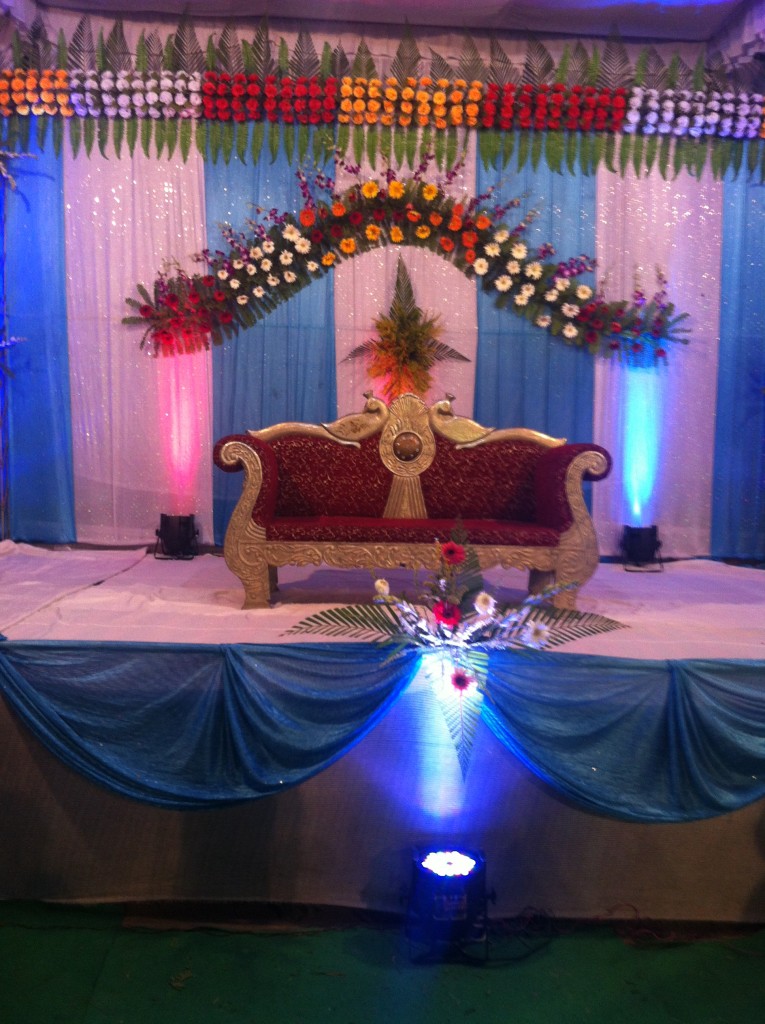 Arranged marriage is still a very common thing in India. I have heard so many different sides to it that I am still not really sure what to think. This wedding was an arranged marriage. I was told that the bride and groom had not met prior to this day (not sure if that is actually true or not. In most marriages I have heard of they meet for the first time at their engagement party). The couple sits on the couch and all the family members come to get pictures taken. This takes hours. The couple just sits there, not talking to each other and not smiling. It was actually really hard for me to watch because the bride was very obviously trying to hold back tears. This is the part of arranged marriage that I struggle with. I believe it is normal to be nervous on your wedding day but it is another thing to be completely terrified.

So I did not actually see the couple get married. Indian weddings last until 3 or 4 in the morning and since it was a Wednesday I could not stay out that late. When I left at midnight I noticed many other people leaving as well. From what I can gather I believe only close relatives attend the actual ceremony of marriage.

It was a great experience to go to this wedding and it taught me a lot about Indian culture. I am hoping to one day be able to go to another and maybe stay the whole time.