As you may have noticed from earlier blogs, my program strives to balance between immersing us in Granada as well as having us experience other locations nearby. By this point we have been to Alpujarra, Ronda, Sevilla, Málaga, Córdoba, and now MOROCCO! Yes, that’s right, a beautiful country on a different continent. IES Granada has established strong connections with many people and organizations in Morocco such that we went in complete safety and with a plethora of unique opportunities that a typical tourist would not have. Here is the sea from the coast of Africa! 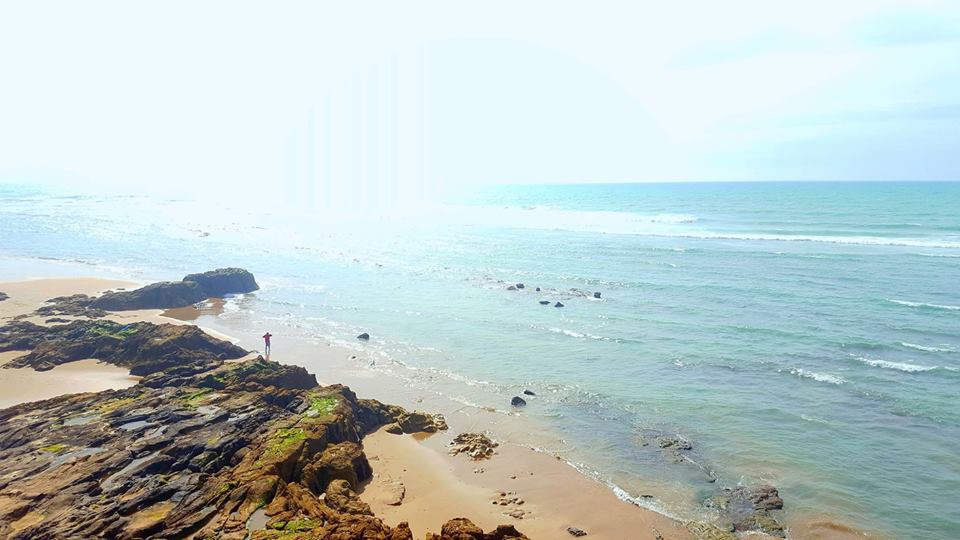 Our Moroccan adventure began with a ferry ride of a mere 45 minutes from the coast of Europe to the coast of Africa. It is only about 8 miles between the two! We arrived in Tangier, a rather metropolitan area right by the sea. I think a common misconception, and one I myself had in some sense, is that we expect 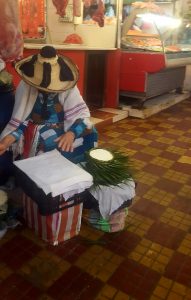 countries, or at the very least, continents, to look radically different. However, in many ways Tangier looked like another Spanish city, with tall buildings and an arid, Mediterranean climate. That being said, the first and perhaps most prominent difference I was delighted to notice was the clothing. As many know, Morocco is a predominantly Muslim and a therefore conservative country. Women often wear long, gorgeous, colorful dresses and head scarves and men wear their own version of dress or long tunic with small hats. As one with an affinity for fashion, I was enthralled to see such a different and beautiful style of dress. Here is a woman wearing very traditional clothing and a traditional hat. The next four days were a blur of beauty, travel, people, exhaustion, and amazement. With the help of our guide “Marky” Mark (I honestly have no idea why this became his nickname…) 17 of us became an inseparable group of young American sponges absorbing all there was to see, do, hear, taste, and touch. Side note: we were divided into small groups for the sake of travel ease, but 100 of us went in total! While in Tangier we roamed this city and visited the DARNA, an organization designed to help women as they are often in rather disadvantaged situations economically and socially. Here we met Hafsa, Sara, and Muhammad, three locals with whom we had very intriguing discussions about religion, women’s rights, homosexuality, politics, and everything else in between.
Our second day in Morocco took us to Rabat, another city but substantially smaller than Tangier. (see here the Mausoleum of Muhammad V) Most cities in Morocco have what is called a Medina, or the old city built centuries ago, as well as the more recent additions. In Rabat we stayed with local families in the Medina! I was baffled to touch walls and streets older than my country’s founding! In R 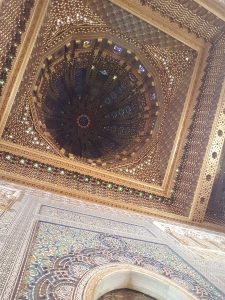 abat we met two more local students, Aishah and Muhammad (a VERY common name in Morocco). We heard their perspectives on marriage, education, and the current king Muhammad VI (told you). This trip taught me so much about Islam. I loved learning about its nuances as well as the commonalities and differences it has with my own religion Christianity. The primary difference between the two is that Islam claims Jesus to be a great prophet but not the Son of God. Moreover, He did not die on the cross! It was a friend who looked similar to him who died, according to Aishah and Muhammad. I confess I almost found this comical to imagine a parent trap kind of switch with Jesus and His doppleganger. However, I of course respect Islam though I may not agree.
Though we certainly took part in exceptional non-tourist activities, no trip to Morocco would be complete without a camel ride! Camels are goofy-looking creatures. I imagine that camels are kid-drawing versions of horses. (We had the same smile) 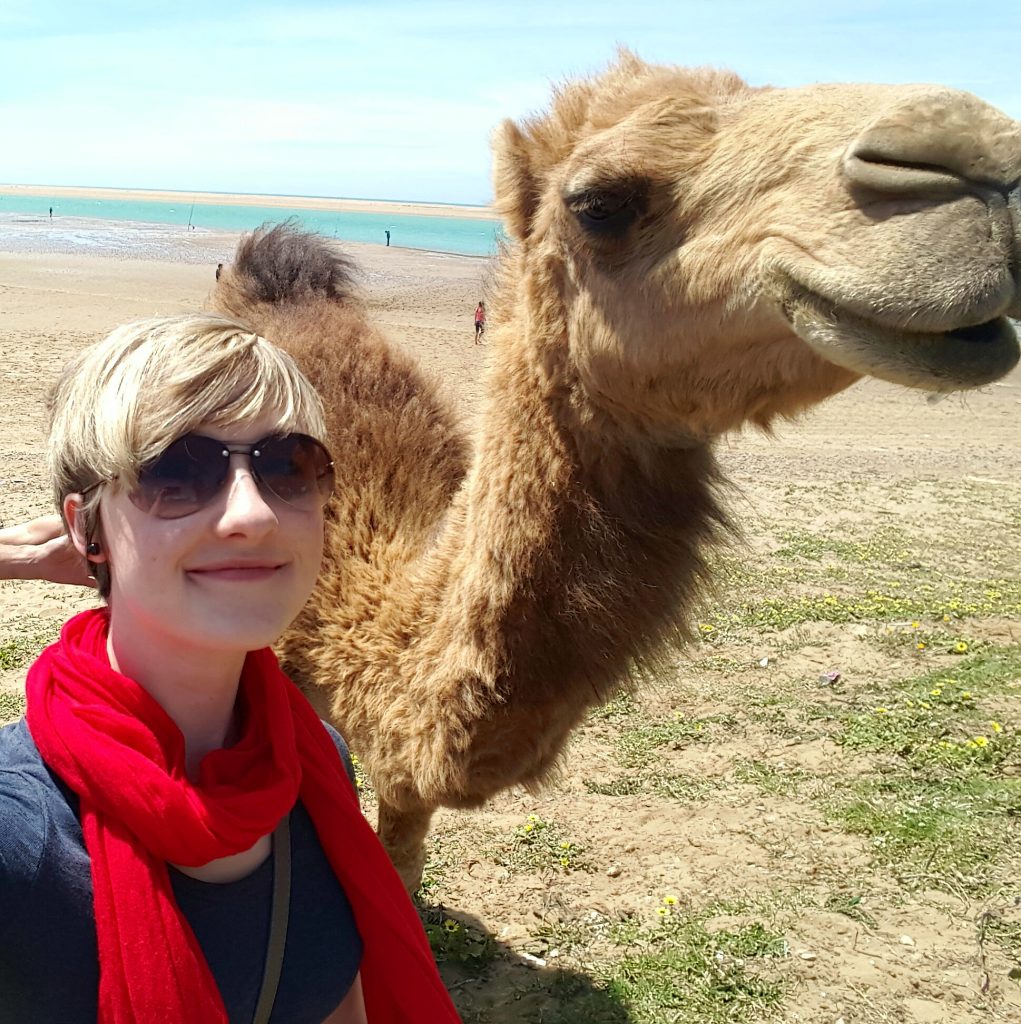 The third day was spent meeting a huge group of local Moroccan students studying English. These guys were super guay. We roamed the city, sipped Moroccan tea, sang, danced, and even witnessed a rap battle between one of our program members and some Moroccans. Listen in!

They were full of life and represented a liberal generation pushing for reform in Morocco. I am interested to see what Morocco will look like in 20+ years when they hold positions of power. Morocco could look quite different. This was probably the highlight of the whole trip for me! The evening held what I would consider to be the biggest culture shock yet. We went to a traditional humaam, a 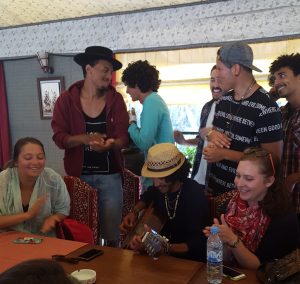 public bathhouse. Not a sauna, a full on, mostly naked or completely naked set of rooms with water splashing, soap scrubbing, and women of every shape and size imaginable. We left shocked but confident having received a serious boost of self-esteem in our body images. The media does not portray real women, so while jarring to see complete strangers stripped down the skin, we were reminded that there is no perfect shape. I am glad that I went, but I would not go again. After visiting the humaam feeling clean and sleepy, we had traditional henna done, another tourist moment. I think this was the most Moroccan we felt, decked out in intricate henna having scrubbed ourselves clean with Moroccan women minutes before.

Before I talk about the last full day in Morocco, I find it entirely necessary to discuss Moroccan food! I anticipated dying from spice-overload but no, it was perfect. I had chicken Tagin, which is a very tender chicken with thick slices of fresh lemon cooked in a traditional pot that looks like a pointy hat placed on a plate. We also 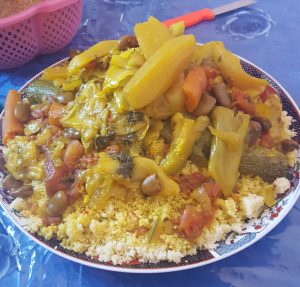 had Moroccan meatballs, traditional flatbread, beets, kebabs, and the most popular Moroccan dish: couscous. I think couscous is the Moroccan version of paella where it is made in massive vats and open to interpretation. Meals are concluded almost always with Moroccan tea: a very sweet brew with whole mint leaves and flowers floating throughout. I am not a huge fan of tea, but this was delicious.

Our final full day involved seeing the enormous unfinished Mezquita of Rabat, visiting ancient Roman ruins, and driving to a mountain village to spend lunch with a local family. One of the family members is working on his master’s degree; his thesis is about terrorism and he kindly asked if he could interview us collectively about perceptions and causes of terrorism. This was an amazing opportunity to discuss with what the media portrays as the “enemy” a profoundly difficult topic. I was grateful for this chance. From the mountain town we travelled through the winding roads to Chefchaouen: the blue city! I do mean blue; nearly every building was painting some lovely shade of blue! Though we did not have much time, we did have the chance to roam the city for an hour or so and barter with shop keepers for various items. The city was magical. Exhausted, stuffed, and amazed, we passed out in our little hotel. 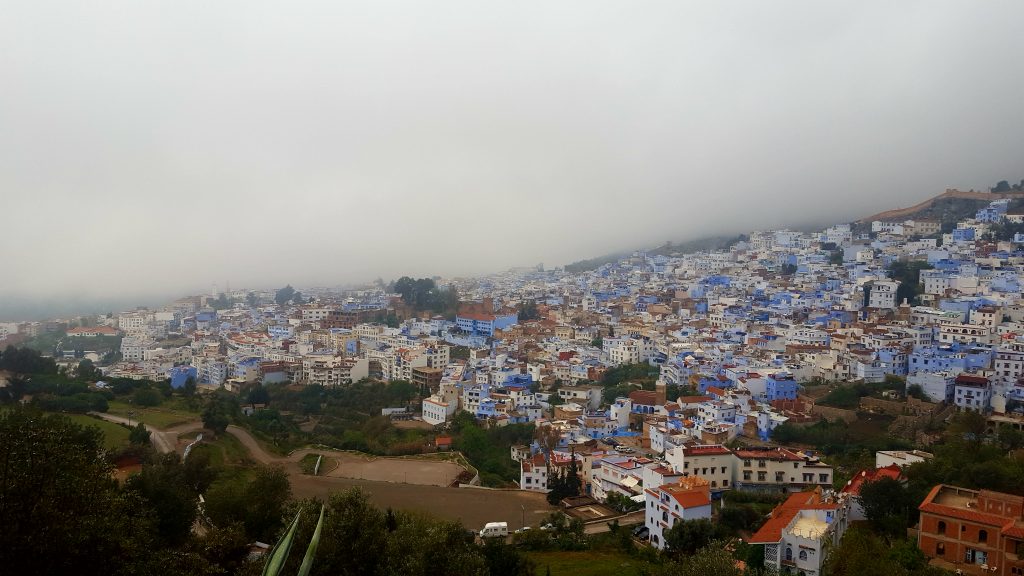 On Tuesday, sharp reality hit. We had to cross the border into a section of Morocco still controlled by Spain therefore technically being Spanish territory. We were all suddenly reminded of our American privilege as we were able to skip the entire line while others waited and waited in the rain. I am able to come and go as I please but few others are as fortunate.

This reality was perhaps one of the most significant “take aways” from Morocco. Another important reminder was that the mystical notions of “the other” as being quite foreign is seldom the entire story. Everyone we met was extremely welcoming (Morocco is the third friendliest country according to national surveys), respectful of cultural differences, and quick to remind us of how much we have in common! Morocco was an amazing trip to say the least. Thank you, IES for the opportunity!

Micro-bio: All the local Moroccan students we encountered in Rabat! I met Anass Ourabia, an economics and marketing student at the Muhammad V University; Eddie Ali, a physics major and an atheist in a very religiously conservative country; Jaafar Rezrazi, who is studying English at the same university as Anass; Ouaddi Ayoub, who plays a mean guitar and who almost has the same birthday as I 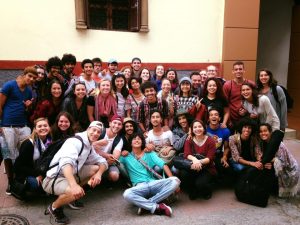 do (I confess I forget his area of study!); and Fatimzhra El Adnani, who is studying English but is actually passionate about Psychology. These are just some of the many students I spent the afternoon getting to know. They are all rather liberal in stark contrast to their environment as aforementioned, but very respectful and open to ideas. They collectively have excellent taste in music and spontaneously dance well. “You have to come back to Morocco,” said Eddie to me. “There are too many beautiful places you have yet to see.” Agreed.

(I am in this photo, but am completely covered up! #shortpeopleproblems)