Justin made it very clear that he was going to help us get over our jet lag as soon as possible! We had an extremely packed weekend. We had arrived early on Friday, so after just a few hours of sleep, we all woke up early to get a tour of the city. Later that evening, Justin, his family, Jeff (the other associate director of our program), his family, and roughly 10 seminary students from Virginia all got to go on a dhow trip. A dhow is a traditional Omani boat that is completely constructed without any nails. However, our boat was slightly modernized with a motor and electric lights. We drank Omani spiced coffee and ate dates on our boat trip. Due to the timing of our trip, we were able to see the sunset over the ocean with silhouetted mountains in the background. Despite the relaxing nature of the boat ride, I was thoroughly exhausted at the end of it.

The next morning, our adventures continued as we all took a trip to the Grand Mosque. The mosque is open to visitors from 8 am to 11 am, Sunday through Thursday. It is truly one of the most magnificent, and well-thought-out architectural structures I have witnessed.  There were just so many details carefully considered during its construction 17 years ago. The entire mosque can accommodate a total of 20,000 worshipers in different praying areas! The Sultan’s goal for the mosque was that no matter the creed, race or nationality, anyone and everyone could find something that they identify with. We were greeted with an expansive English inspired garden. In the middle of the garden was a traditional Omani irrigation and water service system called a Falaj. The building itself was made from marble all harvested from the same quarry so it would age at the same rate. Inside the main prayer room, the rug was handwoven in Iran and finished as it was being laid in the mosque. There were 47 weavers who worked to make the rug a single piece; there is not a single seam in the rug that stretches several meters across the entire room. The amount of detail that went into this building was incredible, making the experience that much more enjoyable!

After touring the main mosque, we were able to go to the information center and converse with some Omani Muslim women about their faith, life, and other things. We were treated to dates and coffee again, and introduced to a new traditional sweet call halwa; it is made of flour, water, sweetener (I think dates) and spices. I loved getting to hear, firsthand, the experience of a Muslim woman in a majority Muslim country. The experience was so new and wonderful that I cannot wait to go back.

Later that same night, we were able to experience traditional Omani food, dress, and dance at the Muscat festival. The festival was originally created for Omani people to experience some traditions they may not have known or been as ‘in-touch’ with. Although not many foreigners go to the festival, those that do typically have some ties in Oman to even know about it.  When we were there, we got to taste traditional foods. There was a crepe-like flatbread that was filled with cheese, egg, and honey. Even though I did not try it, the response I heard from my classmates was nothing short of satisfied. I tried a fried, puffy bread drizzled with honey. It was phenomenal! We were also treated to fresh, hot halwa; I have to say it was much better than the room temperature one at the mosque.

After eating, we roamed around and looked at the different vending stands. I ended up buying some lotions and naturally scented oils. We also passed by some traditional dances performed by men, and a few women. We finished off the night by riding some camels and headed back home. All in all, it was a good weekend, filled with culture, good food, and battles with jet lag. If our first week began like this, I cannot wait for the remainder of the semester! 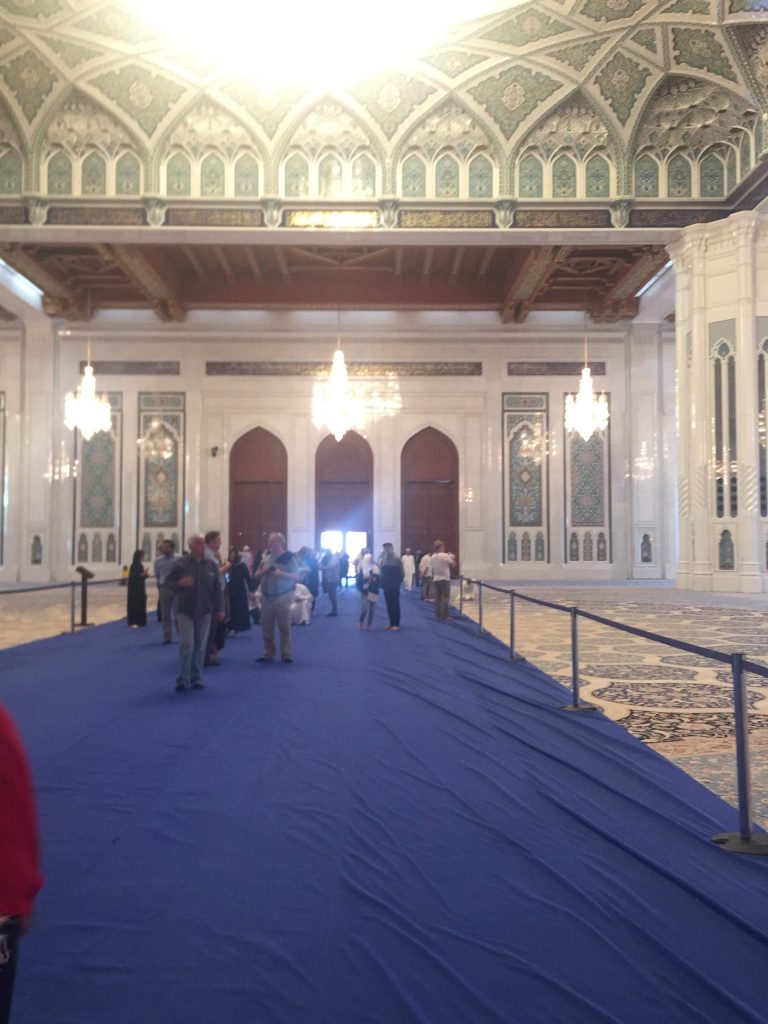 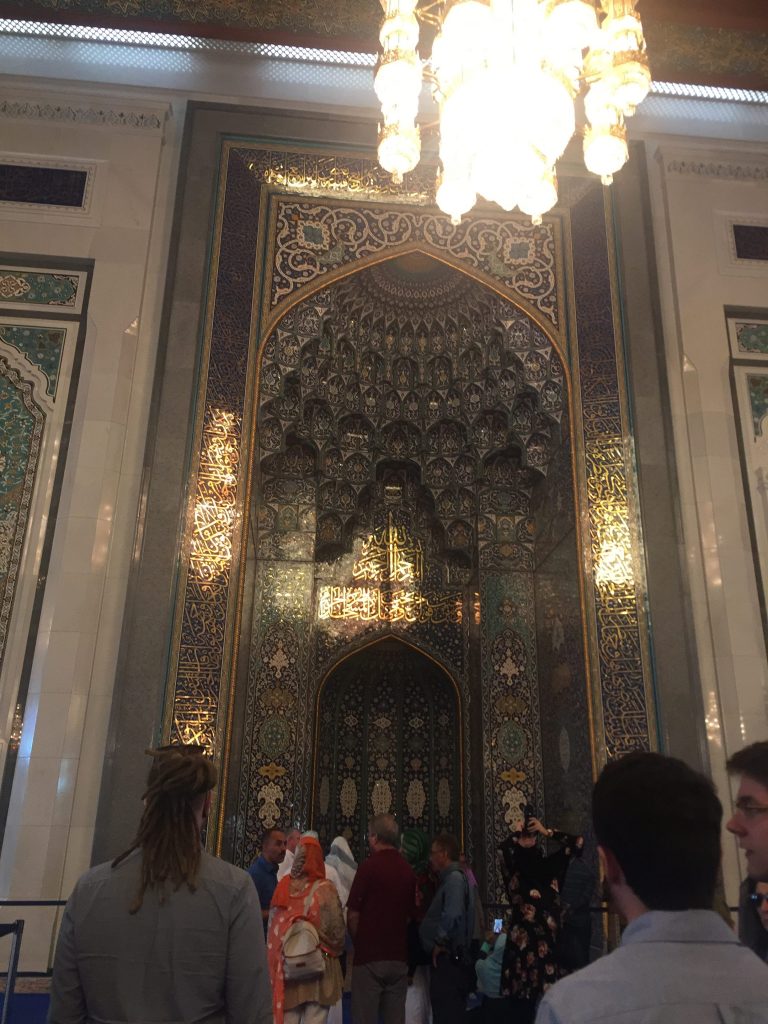 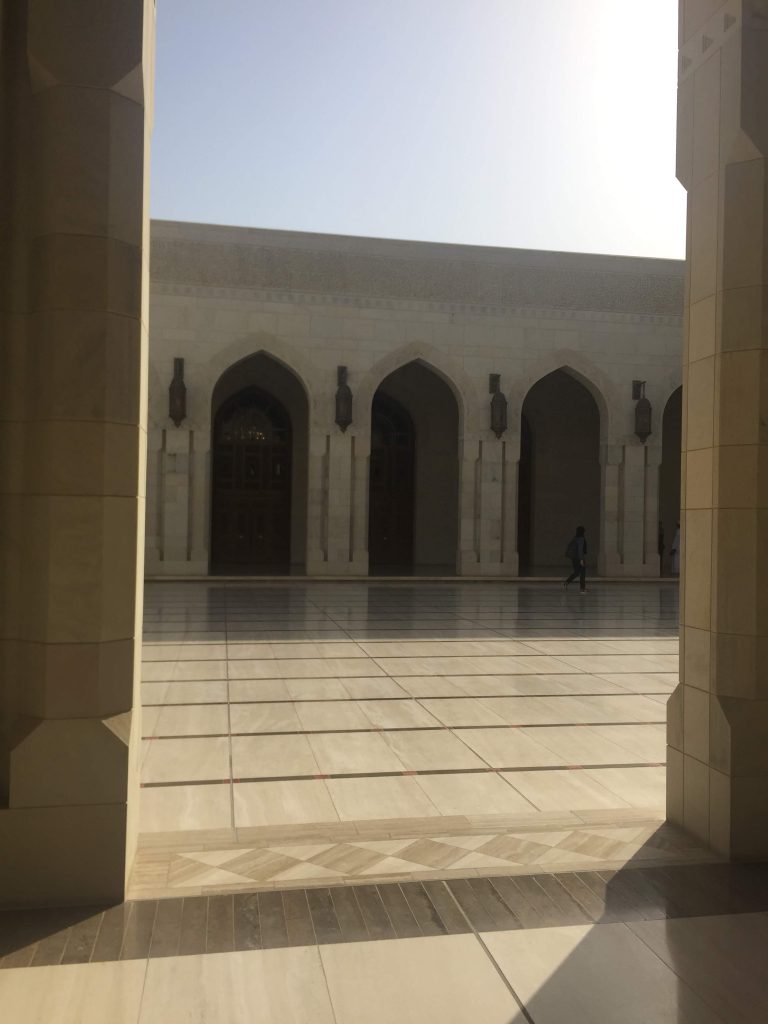 A courtyard that doubles as extra prayer space that can hold up to 8,000 people 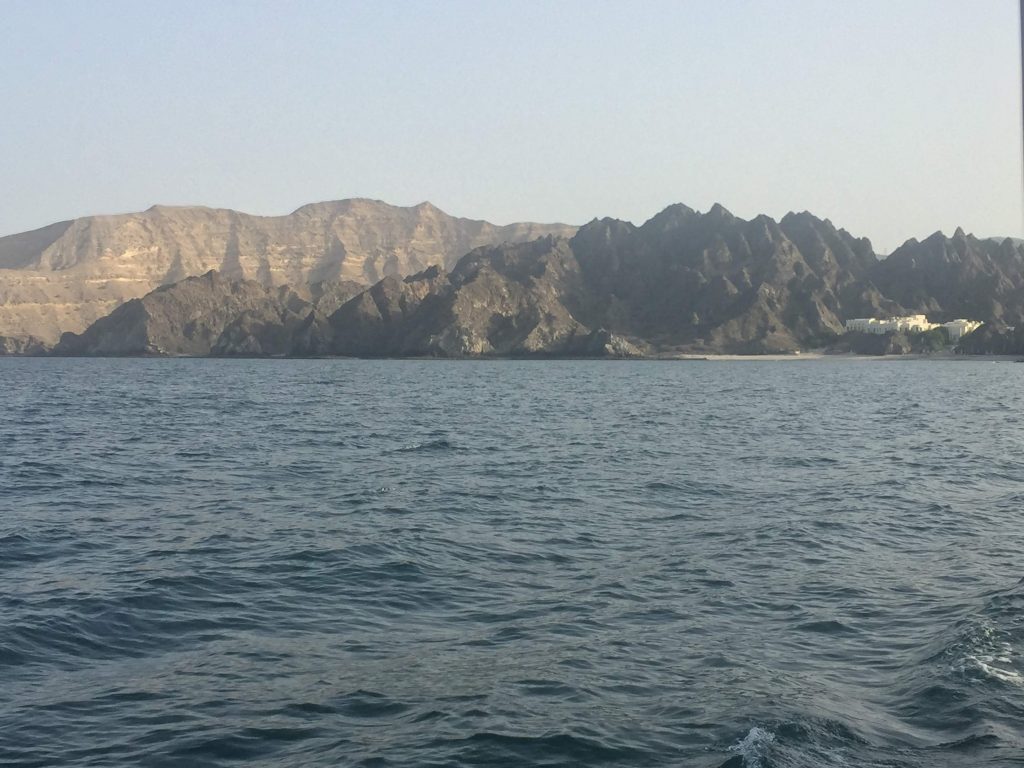 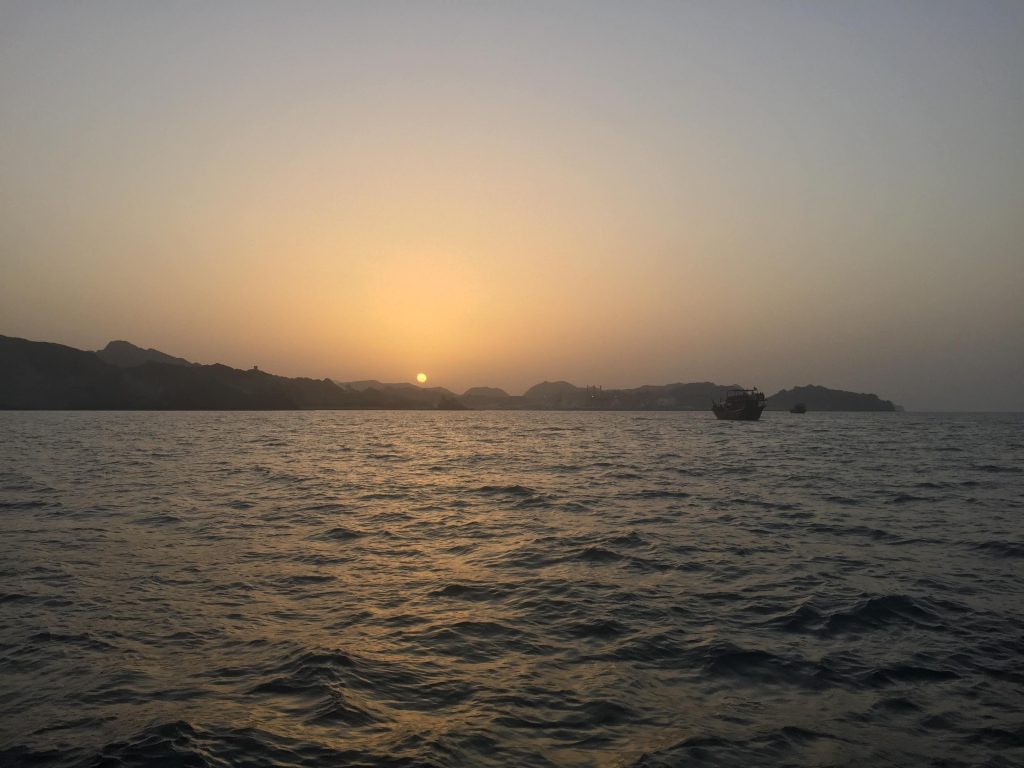 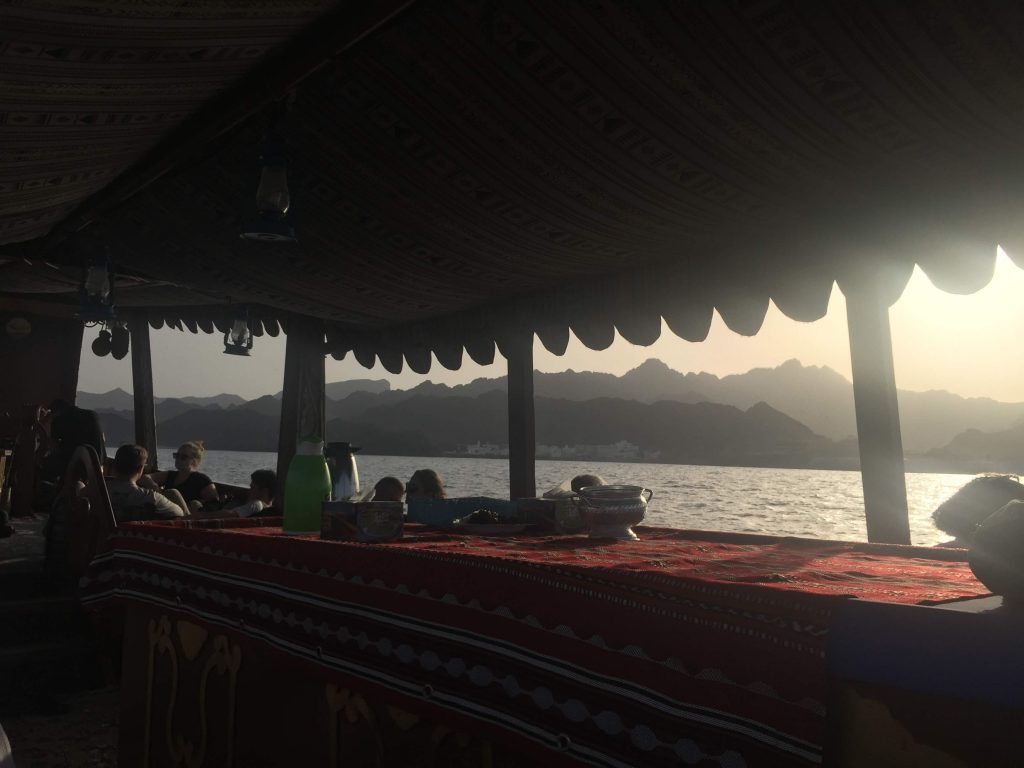 Our array of Dhow snacks