Just this week I finished my first six weeks of my semester in France and can I just say, wow. I know study abroad is an incredible experience to get out and see the world, but my classes have put the study in study abroad. This week we will be talking about the French education system, particularly the university system of which I am the most familiar.

For my program with CIEE, I am required to complete two six-week intensive grammar classes and three other classes taught in French, one of which has to be done at a local university. Since I am now six weeks in, I have just completed the first grammar class and also a French philosophy class. Being intensives, these classes meet frequently and for long periods of time. As an example, for my grammar class we meet Monday through Thursday for two and a half hours each day, ending with a grand total of sixty class hours over the span of six weeks.

This class is entitled Writing Workshop and it is essentially designed to help us succeed in our classes at French university. I actually really enjoyed it because this class is taught by probably one of my favorite human-beings in existence, Marie-Christine, who is a lifelong parisienne that probably stands no taller than five feet and is well into her sixties. If caffeine could take a human form then it would definitely be MC, she has so much energy which is exactly what you need at nine a.m. on a Monday morning.

Everyday after MC marches in and shouts a joyful “BONJOUR” to us, my class starts with a warm up called “quoi de neuf” which means “what’s new?” This is the time where my classmates and I can tell stories about our experiences in Paris and give each other recommendations on places to visit, gossip about our host families, and really just talk about anything so long as it is in French. I consider this my favorite part of class because I can recount a story about something incredibly mundane and normal but Marie-Christine will listen intently and after I’ve finished she will shout some exclamatory like “GENIAL” (great) or “FORMIDABLE” (wonderful). Honestly, this woman provides the kind of encouragement I need.

After our daily quoi de neuf, Marie-Christine moves on to teach important grammar points that will be important for refining our language, but her first mission was to teach the class how to do an exposé. You may be asking yourself: what is an exposé? Well let me tell you, it can be really fun and it can also be really not fun, but we’ll get to that later.

An exposé is essentially a twenty minute presentation, usually done in pairs, about a subject presented to you in the form of a research question, not really anything new or exciting. However, the French way of presenting is quite different. Here’s how I would explain it: Americans say what their subject is and make a claim about it, then they present information supporting their claim and refute counterarguments, ultimately ending with a brief summary of the argument and how it can be applied to different real-life situations. The French explain the context of their subject, state their research question, state their research question in different words, explain the order of what they will do, talk about their research, restate what they have talked about, and lastly state their argument. While my class was learning about this incredibly foreign and slightly nonsensical way of presenting, we were all completely blown away by how counterintuitive the entire process was from what we had been taught in the American system and it took us a while to fully understand the concept.

After we learned how to do an exposé, we were tasked with actually carrying one out on different subjects and people in the quarter of Paris called Montmartre. Since the concept was so strange to us, this first round of exposés was slightly awkward because we had never done them before. After that first round where we all presented our exposés for our class and the beloved Marie-Christine, we started a second round of exposés that went much smoother than the first on the subject of Montparnasse, another famous quarter in Paris.

When we aren’t working on our exposés in writing workshop we are learning grammar, and not normal grammar; this is upper level stuff that has definitely had my brain doing gymnastics. While it has been hard to learn and difficult to grasp certain concepts, I definitely feel like I’ve already learned so much and my French is much more fluid than it was six weeks ago.

One final piece of this class that I have yet to mention are our group outings. My class has done extensive research on two important quarters in Paris: Montmartre and Montparnasse. These two neighborhoods have been host to some of the greatest French and foreign artists to live in Paris. Characters such as Pablo Picasso, Sartre, Gertrude Stein, Saint Denis, Josephine Baker, Kiki de Montparnasse, are all people we have studied and after all of that research Marie Christine took us out on little field trips to explore the areas. It was on one of these tours that I got to see Bateau-Lavoir, the workshop of famous creatives linked to Pablo Picasso, Cimetière de Montparnasse where Jean-Paul Sartre and Man Ray are buried, and Sacre Coeur at the top of Montmartre. 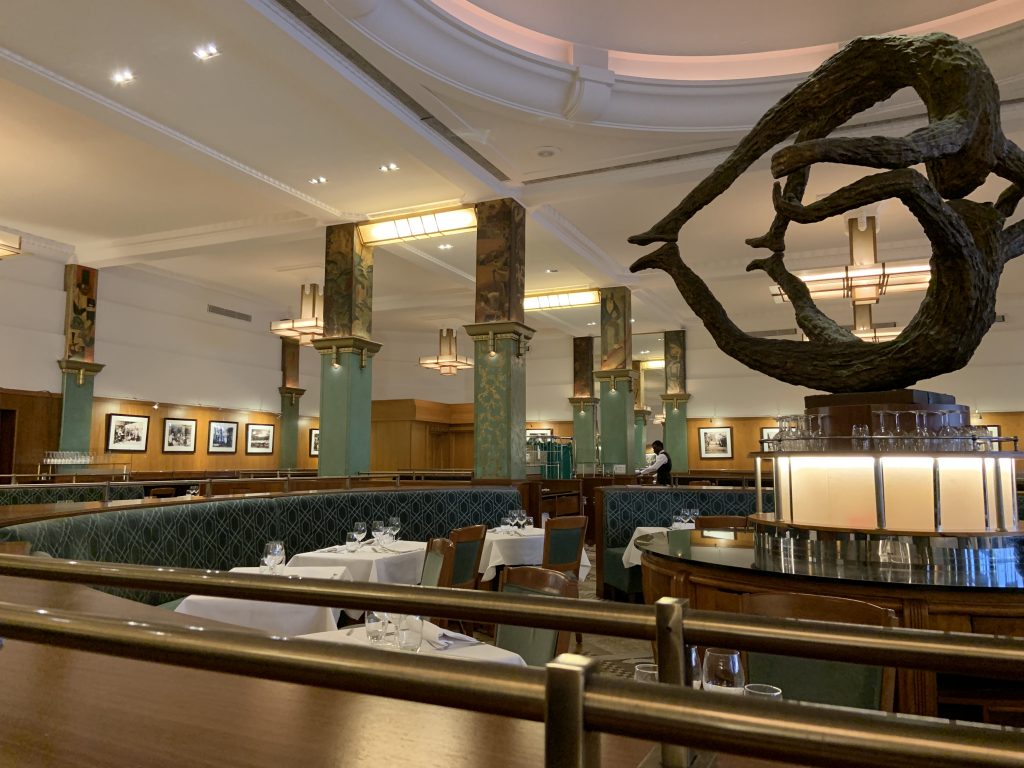 La Coupole, one of the most famous cafés in MontparnasseThe other requirement of my program is to take at least one class at a local university. For this, I was given the option between two schools within the University of Paris system, Sorbonne Nouvelle which is well known for its classes in cinema and literature, or Paris Diderot which is a largely humanities based school with broader options for classes. Not quite knowing what kinds of classes I wanted to take, I chose Diderot since it gave me greater variety. 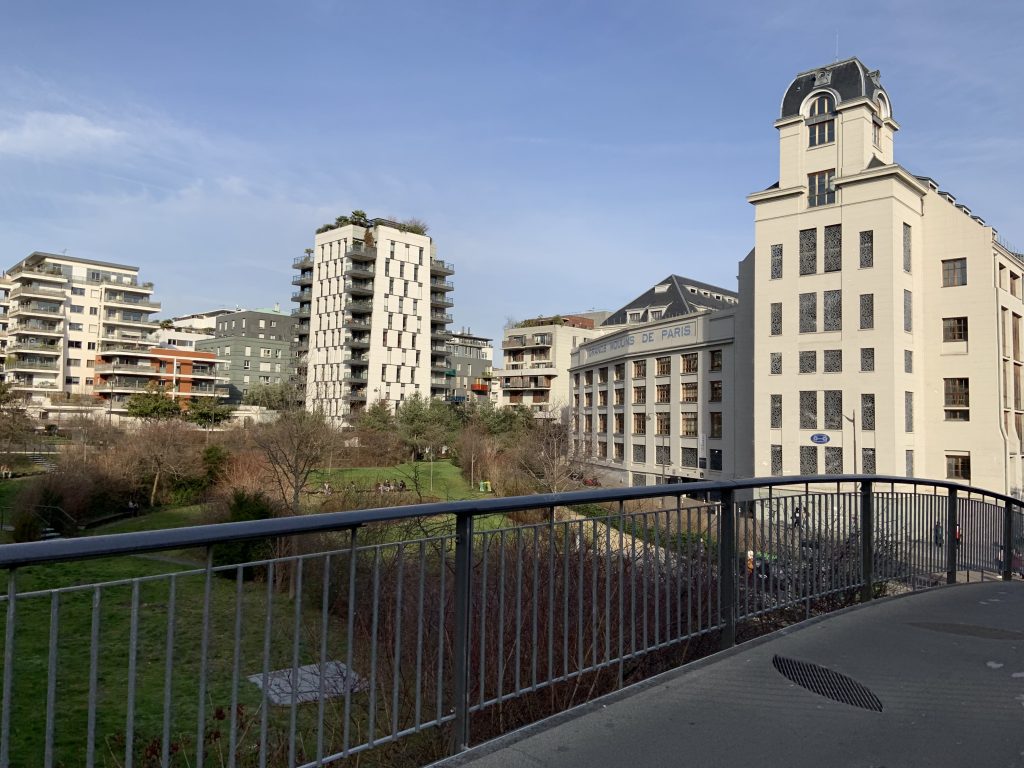 At Diderot I chose to take two classes, a history class about South Asia with a particular concentration on colonial India, and a sociology course about migration and globalization. These are both semester long courses taught in French (obviously) for French students. The one really great thing about these classes is that they aren’t intensive like my classes at CIEE so instead of meeting every day we only meet once a week for three hours.

Right away I noticed some very distinct differences between French and American university:

One kind of funny example of this last point comes from my first day at French university. I was with a friend from my program and we had taken really good notes throughout the entire class, then the professor wanted to assign exposés before the class was over. Now my friend and I weren’t technically registered for the class and she and I had yet to do our exposés with Marie-Christine so we figured we would wait until we got officially enrolled in the class before we volunteered to do an exposé for it. Well wouldn’t you know, the professor assigned exposés to everyone in the class and then asked if there was anyone who hadn’t yet volunteered. It was clear at this point that it was down to just a select few people who hadn’t, my friend and I included. So I raised my hand and asked if I could speak to the professor after class. It all went downhill from there. Instead of saying that she’d talk to me, she assigned my friend and I the very first exposé to be presented in a week. It took a second for the information to sink in and then suddenly class was over and everyone was gone. I went up to the professor and explained to her that I was an international student and that I wasn’t yet registered for her class and could I please not do the exposé next week? She enrolled me in her class right there and told me she anticipated my presentation. I was in a bad way after that. I called my mom and talked her through the situation and she did her best to encourage me.

My friend and I worked tirelessly all week and consulted Marie-Christine on how to do it, by the time the next class came around we were nervous. The professor invited us up to present and just as I got out of my seat I knocked my Hydroflask (those huge metal water bottles you see all over campus at Hope) off my desk onto the tile floor and let me just say it was not quiet. I was mortified! I quickly pulled myself together and we got up to do our presentation. It was a little weird considering we were two foreign students presenting in a language and format that made sense to everyone else in the room but us, but we did it! We finished and I swear I left that class feeling two inches taller!

So this story doesn’t really have much of a moral, but if I could do it again, knowing what I know now, I would have had a longer conversation with my professor and told her my situation: I’m not only an international student who doesn’t speak French as a first language, but also I’ve never done a presentation in the French format before. If I would have done that I’m not sure what the result would have been, but at least the professor would have been more aware of my situation so that maybe she would have given us more guidance and let us learn from other students before we had to present ourselves.

In sum, school here is difficult. It’s difficult to summarize my entire six weeks of schooling in just a few pages of writing, but while it has been a challenge, I also know that I’m growing immensely. Just yesterday I went to an extra-curricular lecture and started talking to a professor in French, he thought I was in France for my masters degree and was shocked to find out that I was just here for a semester after only having visited the country once before. It’s moments like this that remind me that despite this program’s difficulty, I am making progress.