It must not be thought, dear reader, that Josh the blogger has been careening from classical ruin to classical ruin, beach to beach, with hardly a paper in between.  In fact, I’m devoting a whole post to demolish this myth, and I lay it here at your feet.  I’ve decided to record my weekday schedule, along with pictures I could find of my lovely little campus building in Athens.

7:20 AM –Wake up because I live in room with a translucent slide connecting me to my most excellent housemate.. He’s quite the lark -he wakes up, turns on his lights, and swings out of his room. He’s in the army, so this makes sense. “It’s been historically proven that the best time to attack an enemy is just before dawn.  That’s why they train you for it,” he tells once, biting in a tiropita. “Back in training they used to get us up at four or five some days, just to take positions outside camp, and then carry on with the rest of the day. Now, seven’s sleeping in.”

7:45 –With the desperate recollection that I’ve not ironed my clothes, or eaten breakfast, or utilized the lavatory. So begins twenty minutes of frenzied preparation for the day. All in all, a good day’s work before cornflakes and Greek milk. I think I do a decent job of eating cheap. Half my roommates are asleep -the other half is talking a lot about music and delightfully absurdest YouTube channels that I try not to watch when I have a test to revise for.

8:30 –Classes begins. I trundle out the door with my non-leather messenger bag, my doodling sketchbook, and my actual notebooks. I walk down Eratosthenes Street to get the academic center, which stands right next to the Pan-Athenaic Stadium they built for the very first Olympics.  It’s always busy in the morning. There’s a bakery that sells Greek pies and cakes and the owners, Katerina and Katerina, have a small plate of free butter cookies at the counter. I like their spinach pies. 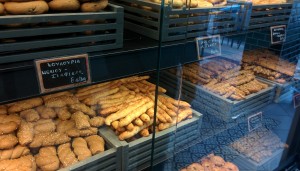 8:45 –Dr. Diamant’s Art and Archaeology in the Aegean.  “Diamond is the American pronunciation. If you wanna say it like my father when he moved from Austria it’s just as well. Dee-ah-mahnt. However you like,” he’d say, waving his vein riddled hand and batting his fedora out of his hair with his unlit cigar. Then he’d knock a knuckle on the board to his chronology chart. Excellent professor.  He does assign us four well, well, written papers a semester, so it certainly keeps me busy.

“Typical Mycenaean art.  Not much psychology behind a war chief who wears a boar’s tusk helmet…who’s he trying to impress?” -Dr. Diamant.

11:00 am –Dr. Karavas and Hellenistic history -basically the world after Alexander the Great.  Sardonic, abrasive, and often downright hilarious.  Makes lots of Game of Thrones references about Queen Arsinoe, and sweeps you away in a story until you forget to take notes and realize you still don’t know much about Hellenistic history.  Generally fun class.

Noon –Lunch. I live for early lunches.  I have made friends with Meni, the lovely lady from Lesvos who runs the counter.  I practice very bad Greek and eat her pasta and apple pies. They do very good cream desserts, very decent moussaka, but not particularly good Tex-Mex. Derek and Phil are still discussing Herodotus and YouTube links about Bread fish – always fun conversation.

3:30 –On Tuesdays and Thursdays, Attic Prose.  Dr. Kritsotakis is a wonderful guy –very droll, very Greek, and rather adverse to the cold. We huddle around our table and try to translate Lysias’ “Against Eratosthenes,” a 2400-year-old lawsuit. Positively scintillating stuff, as you can imagine. 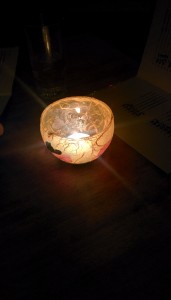 pasta, cheese, and onions it is. Drew draws on his massive knowledge of smart pop culture again and this time I have time to watch whatever’s online. Phil talks about some terrifying encounter he had last week with a Greek farmer who thought he was an archaeologist named Chris, who apparently has been destroying the old site of Old Corinth. Or the roadside dogs that tried to chase him for twenty minutes. Derek suggests Phil lives in a Wes Anderson film.  “You’re not the first to say that,” he says.  Of this no more may be said.

7:30 -We attend a traditional Greek performance of folk music.  In a little cafe-bar called Aliko, down
Monastiraki, a few of us grabbed a table and sipped
tea while the jam was underway.  They had pretty table-lights 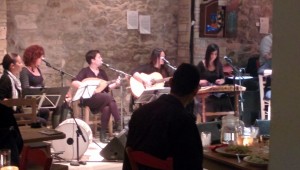