Today, the classroom was a mudpit. And a most pretty mudpit, at that. We spent the better part of the day hiking through a mangrove forest occupying the brackish swamp where the freshwater Tempisque river meets the salty Colorado gulf. 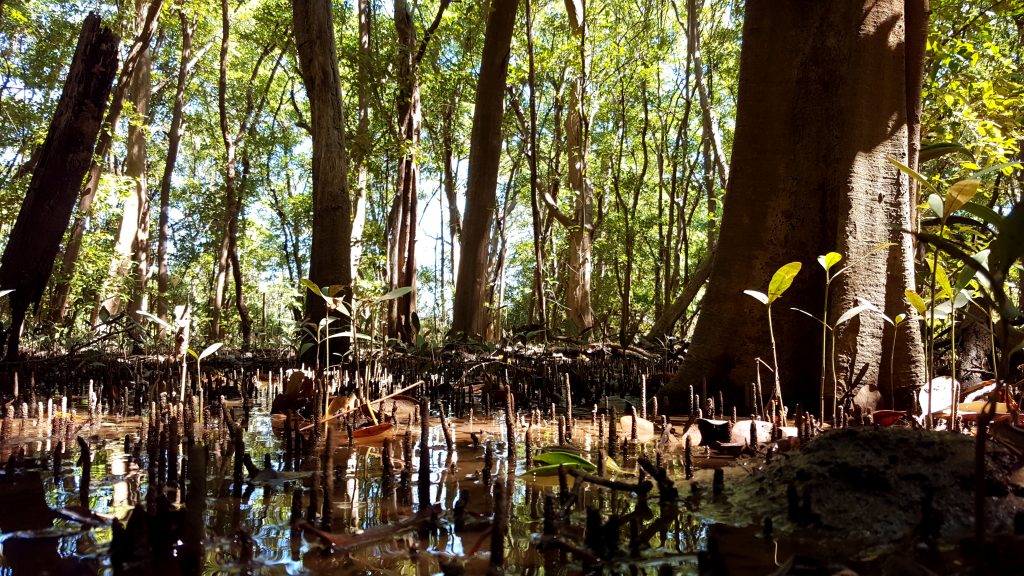 We took our first quiz of the semester whilst sitting in a semicircle on fallen trees in a glistening mud lake. I tried to keep the thick, dark silt from smearing on my paper as I hastily scribbled down everything I knew about mangrove conservation, and was partially successful. I wonder if cleanliness will have any bearing on my grade?

Aside from their aesthetic appeal (who doesn’t love a giant combination jungle gym and mudpit?), mangrove forests are incredibly important sources of shoreline protection. Their positions along the coasts allow them to serve as living barriers between tropical storms and inhabited land, both as windbreaks and flood shields. Shoreline erosion, too, is curbed by their snarled masses of roots, which function as a living subterranean net. They also provide a unique habitat for crabs and fish, and, by extension, a tasty hunting ground for raccoons and coatis. 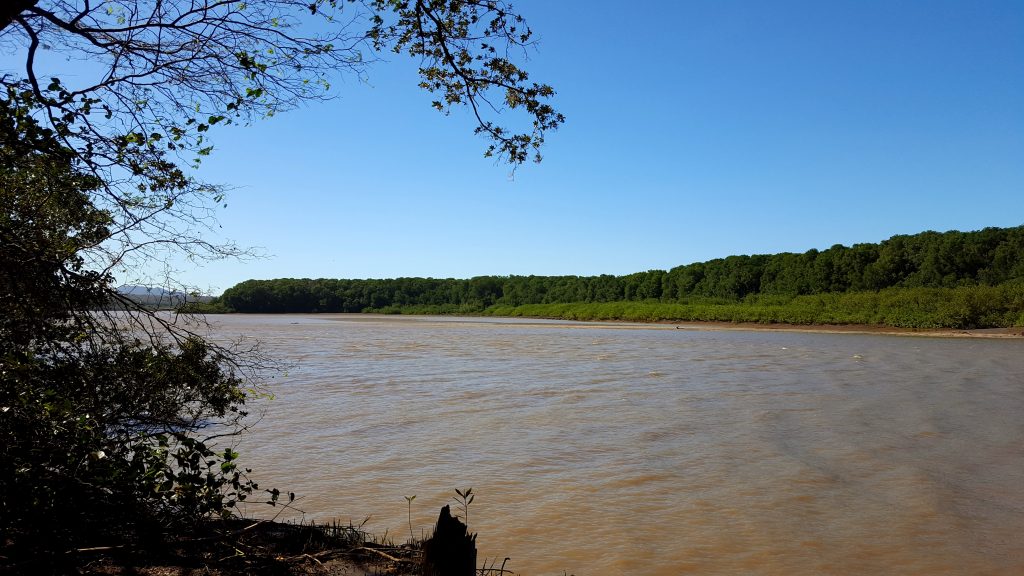 On the way in, we did some crocodile-spotting along the river! There were several American crocodiles (Crocodylus acutus) floating lazily along with the current or sunbathing on the sandy bank. I never thought the day would come that I’d share my classroom with these fellas, yet here we are. They’re a smidgen too distant to spot in this photo, but I wasn’t about to get a close-up—no matter how broadly they smiled for me.

We also saw plenty of friendlier fauna, such as… 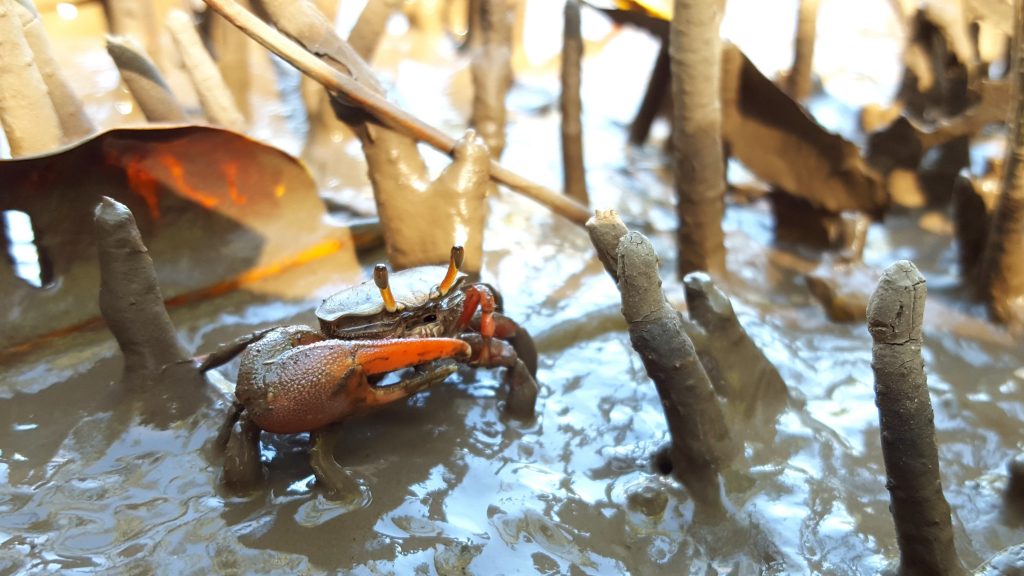 Crabs! The mangrove forest was swarming with them. Though I wanted to gawk at our surroundings, I tried to keep my eyes on my feet lest I crush someone’s dear crabby wife or child. We mostly saw fiddler crabs, various members of the Uca genus, recognizable by that single dominant claw which the males use to battle each other for the attention of the ladies. Mangrove crabs are as important as the trees; their burrowing helps to mix oxygen into the anoxic soil, thereby aiding decomposition, and they also function as tiny lawnmowers by munching on seeds and seedlings. 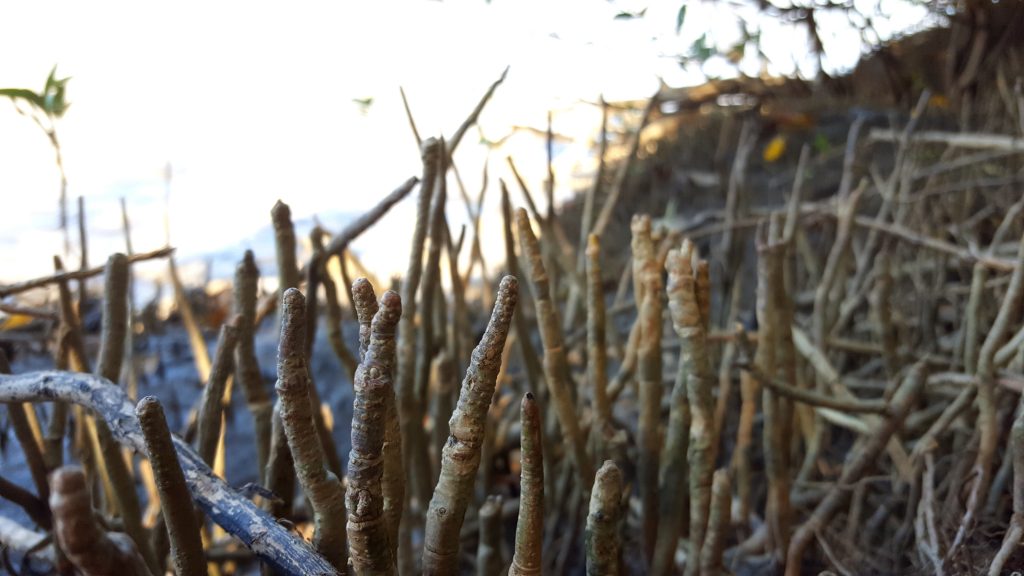 These slightly terrifying things clawing their way up from the mud are called pneumatophores, and are essentially the lungs of the mangrove trees. These specialized roots have lenticels, pores that function as a point of gas exchange between the tree and the atmosphere at low tides. The silty mangrove mud is too fine for atmospheric gasses to penetrate, so plant life has to get creative. 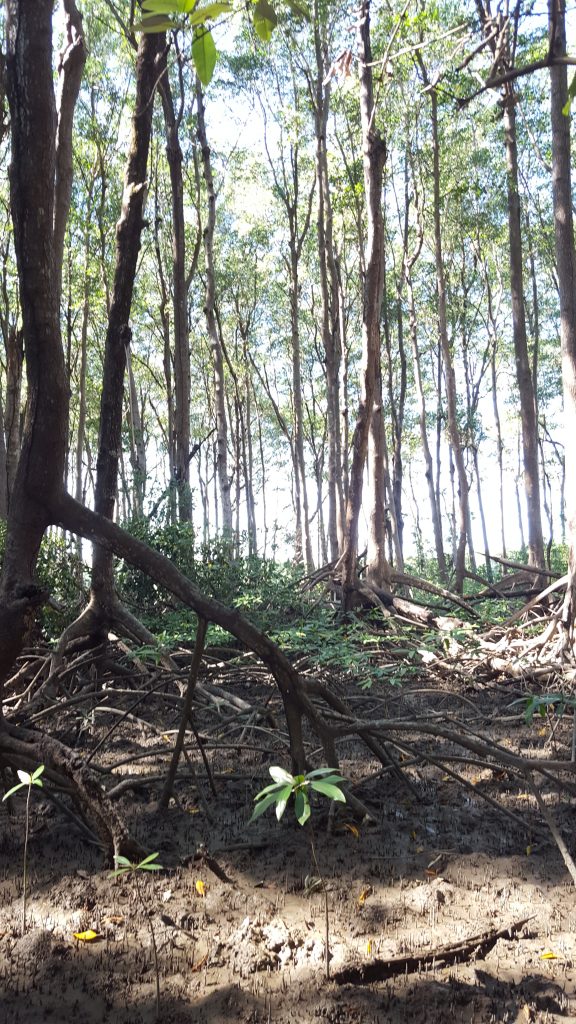 Stilt roots help the trees stay upright in the mangrove mud, as well as provide another point of gas exchange. It’s hard to tell from this photo (I wasn’t eager to pull out my phone for very long in a giant sludge lake, so the pics are what they are), but those roots arc well above my head. As we walked deeper into the mangrove, the roots overlapped to form thick, muddy webs for us to crawl in and around. It was a bit like trying to squeeze through a laser maze, but infinitely more filthy and slippery. In a word, heaven.