Hello, world! I am back at it and this time not suffering from the negative effects of jet lag! I have now been in Paris for almost a month so I feel that I’m much more able to start posting about happenings and life in general in Paris now that I’m better acquainted with the city. This week we are talking about: the French home.

My study abroad program, French and Critical Studies with CIEE, is a language intensive program which means that everything that we do associated with CIEE is in French. What that means is that the program forces us to be fully immersed in the language ALL .THE. TIME. CIEE in Paris has two options for housing: student apartments or a homestay with a French family. The students in FCS, however, don’t have a choice; we are required to live in a home stay in order to keep us exposed to the French language.

That being said, for the past month I have been living with my host mother, Katherine (pronounced Kat-rine with a nice French rgh) who, as I mentioned in the previous post, doesn’t speak a word of English. When I first learned this, I was terrified that she and I would struggle to relate with one another; I feared that I wouldn’t be able to express myself. However, we are nearly a month into living, speaking, and dining with each other every single day and I can confidently say that my fears were completely unfounded.

You see, Katherine loves, and I mean LOVES to talk. She sits with me at breakfast every morning and listens to the radio, but as soon as she hears something that sparks her interest the radio is forgotten and she is speaking, with a relatively high level of knowledge about the subject and flowing right on into the next one. This was especially great for me the first few days into living with her because there really wasn’t a need for me to talk and I could get used to the pace of speech from an actual French speaker. These days I’m much better able to interject with my own opinions on the subject and she and I can have more and more conversations which I think both she and I really appreciate.

As I’ve been able to communicate with Katherine, I’ve learned a lot more about her and her life. She is in her 70s with three grown daughters, two of whom live nearby and frequent the apartment. She started her professional life as a secretary but somehow got connected with someone in the art restoration business which led to her second and most favorite career as an art restorer. She told me that she’s worked on a team that has restored big pieces of art such a painted ceiling in the Louvre and another work in l’Assemblée Nationale. She still does some smaller pieces and I occasionally come home to the smell of some of her chemicals that she uses on the paintings.

Speaking of home, for Katherine and me home is a two bedroom apartment in the northwestern suburb of Paris called Neuilly-Sur-Seine. There I have my own room with a big window that looks out over our ally with those cute white Parisian window shutters. I also just have to mention: in the bathroom we have a heating rack for our towels! It’s pretty standard for French homes but I just find it amusing and also incredibly amazing when I get to wrap myself in a warm towel — it’s just great. 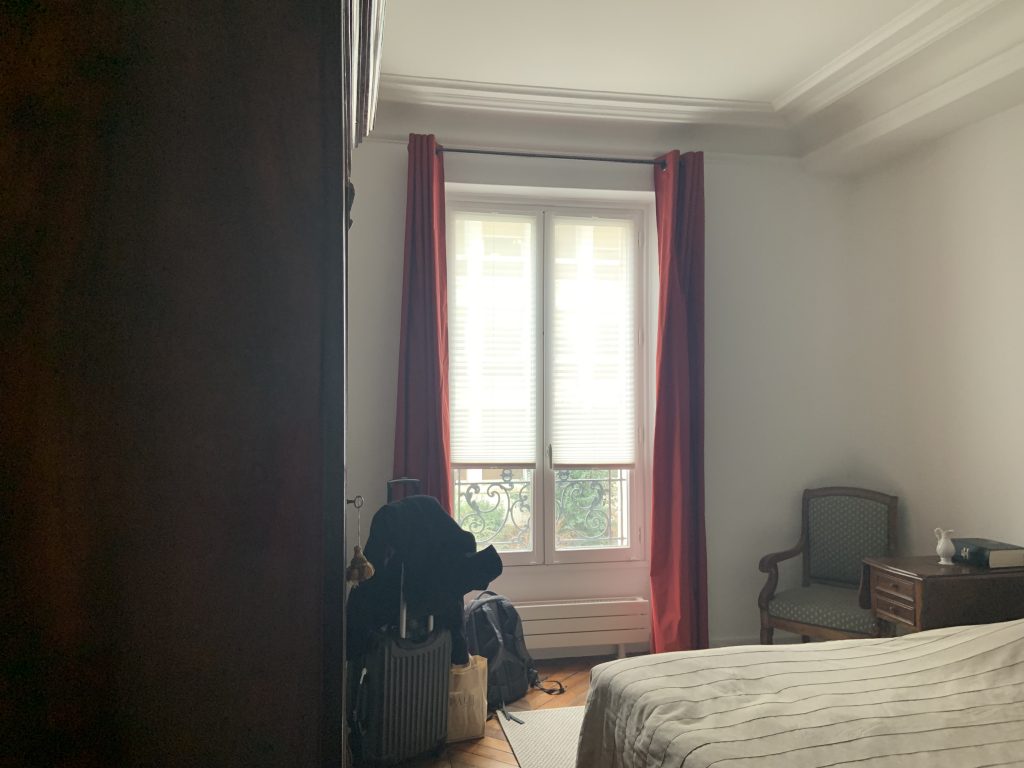 A little bit about Neuilly: it’s smack dab in between l’Arc de Triomphe (that fancy Roman-looking arch that Napoleon built way back when) and La Defense which is just a gigantic hollow cube in the more business-y part of Paris. Neuilly, as I’m told, is rather chic, although I can’t say that stops people from letting their dogs “relieve” themselves on the sidewalks and not clean up after them. Yeah, watch your step.

Other than that, I’ve found that our apartment in Neuilly is actually in quite an ideal location. It takes me about four minutes to walk to the metro which will then take me straight into the city which can connect me to ten of the fourteen lines in the city. I am also just a ten minute walk away from the Bois de Boulogne which is to Paris what Central Park is to New York. Saturdays are especially hectic with runners and walkers everywhere, not to mention tons of adorable dogs out playing in the fields.

Another essential part of my French home life is the food. Katherine is an amazing cook. She can turn anything into a delicious and nutritious meal. I remember my first night with her I was a little apprehensive when she put my first meal in front of me: cabbage wrapped in ham and covered in cheese. As far as looks went, I was strongly questioning whether what I was about to put into my body would even be worth it, but I was starving so I dug in and it was incredible! Also, leftover night at our place is not to be dreaded because she just whips something completely new together from the ingredients she used previously. I’m serious — carrot and mushroom in a creamy sauce over angel hair pasta…who would have thought?!

At times Paris can feel slightly exhausting and incredibly lonely; it’s hard to live in a place that you’re unfamiliar with around people who don’t know you or even speak your language. In a city where it is so easy to be anonymous sometimes you just want a taste of home. I’m sure every student who has studied in a foreign country understands exactly what I mean, but I have to remind myself how lucky I am to have this opportunity. When I get these kinds of feelings I’ve found that it’s best to talk to friends and family; they really are just a phone call away! Also, if you can find it, eat some of your favorite food. If you can’t find that, listen to some of your favorite songs or do the same activities you would at home. For me, I’ve found that going for a run helps me immensely because running has always been a very cathartic activity and it’s something that I’ve done first at home, then at school when I moved away from home, and now I can do it here!

No, things will not be exactly the same as they are at home but that’s precisely the purpose of study abroad: to gain a new perspective. Instead of being stuck on what I miss about my home in the U.S., I go out and explore to find new things that help me feel at home here.