Upon arriving in Australia I had made it a priority to ask Aussies that I came across for places they would recommend for a weekend trip. From my own research I had considered Melbourne, Uluru, and Tasmania, and while the Aussies agreed that those would be fantastic spots, the suggestion I heard time and time again was the Whitsunday Islands. To be completely honest, I had never even heard of the Whitsundays. I was skeptical, to say the least. So much so, in fact, that I probably wouldn’t have gone had it not been for a friend of mine. I knew from budgeting for trips that I could probably afford to take one of these weekend trips and I had pretty much decided on Melbourne. He then pointed out that I had made the decision about a couple of bigger trips we would be making and that the Whitsundays was what he wanted to see the most. I conceded and we booked our flights.

We left Sydney in grey skies and 50 degree weather; we landed to clear blue skies, 80 degrees, and a slight breeze, which continued for the entire weekend. The van ride from the airport to Airlie Beach, where we were staying, took about forty minutes or so, and as we drove, I was surprised how similar to the Midwest this part of Australia seemed. We passed a lot of farmland — fields of sugar cane rather than corn, and we drove through a small town or two with not much more than a gas station and general store. Then, upon turning up a hill and around a corner, the driver said “Everyone, welcome to paradise.” As I alluded to earlier, Aussies are proud of the Whitsundays and Whitehaven beach… as they should be! I quickly decided that while Melbourne would have been an incredible experience, I certainly could not consider this trip to be a ‘bad decision.’ 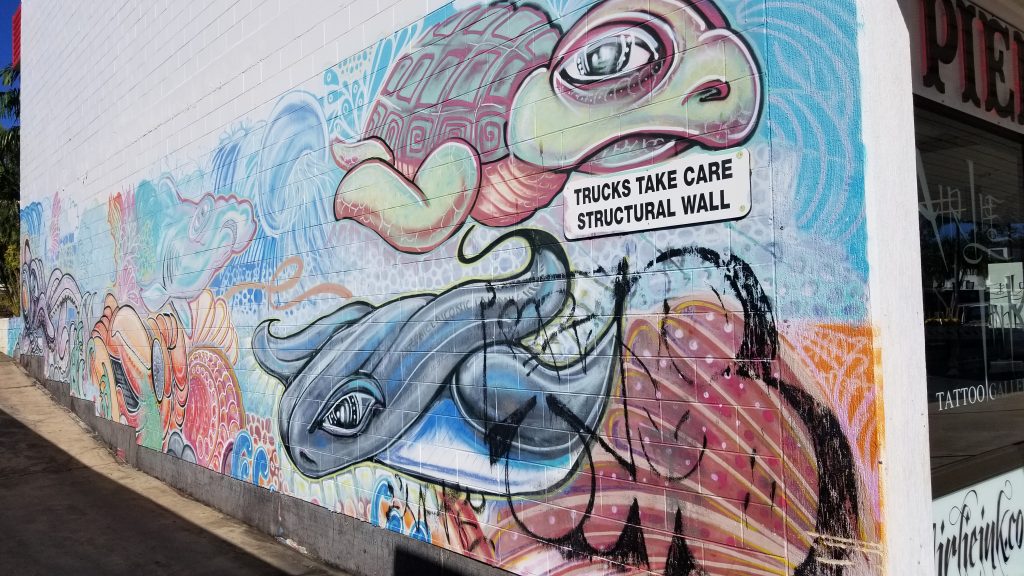 Airlie Beach, like Cairns, and to be frank, a large portion of Australia, is catered towards two types of people: wealthy vacationers, and backpackers. Housing options at Airlie were essentially a choice of about four or five hostels, or renting a nice cottage overlooking a harbor. It’s been incredible as I have started to feel a bit more at home with the ‘backpacker culture’ that I have come across in Australia simply due to the exposure that I have had with this group. Although I’m not sure I can picture myself living as a full time backpacker like many of the people I have met are, I can’t help but admire the lives that they lead and feel cool about the fact that I am experiencing a small part of that life for myself. That also increased my excitement for New Zealand where I’ll be backing for about two weeks and living with other backpackers for the entirety of that trip!

The day after flying in was the day trip onto the Whitsunday Islands and Whitehaven beach. The Whitsundays are an archipelago of 74 islands, yet only eight of these are actually inhabited since the rest have been deemed a part of a national park. As a result, island after island we passed were entirely covered in forest, brush, and amazing rock outcroppings. The Whitsundays are also at the bottom of the Great Barrier Reef so naturally the water is filled with wildlife as well. As we were on our way to our snorkeling stop, we passed a massive sea turtle as it breached, and although we didn’t see any, the captain also told us that whales are quite common to find around the islands during this time of the year. We first did a bit of snorkeling over a small reef which was as beautiful as always. Plenty of fish were swimming under us and an Aussie even got my attention and showed me that after swimming down beneath a bit of reef we could see a black tipped reef shark! The shark was about six feet in length and our guides told us that’s about as large as they tend to get.

Below is a short video where you can see part of the shark. Unfortunately he was a little shy to show his face

After we finished our snorkeling, the boat took us to a different island where we could take a short hike up to see the Hill Inlet. The Hill Inlet is now the second most photographed piece of Australia, just behind Uluru/Ayers Rock. To try to describe the Hill Inlet is really impossible so I will just include pictures so that you can see the indescribable beauty of the Whitsundays. The reason why the water is so blue and the sand is so white is because the sand is very special. While most sand around the world is made of quartz, the Whitsundays sand is made of 98% silica, and while scientists aren’t certain, they believe it originated from an underwater volcano that erupted long ago. The silica in the water then changes how light reflects off of it creating the indescribable views that you will see from the pictures. The guides also told us that we were very lucky as the view we got was about as good as it gets. Due to the water levels changing and sand shifting, the view from Hill Inlet actually changes every forty-five minutes. 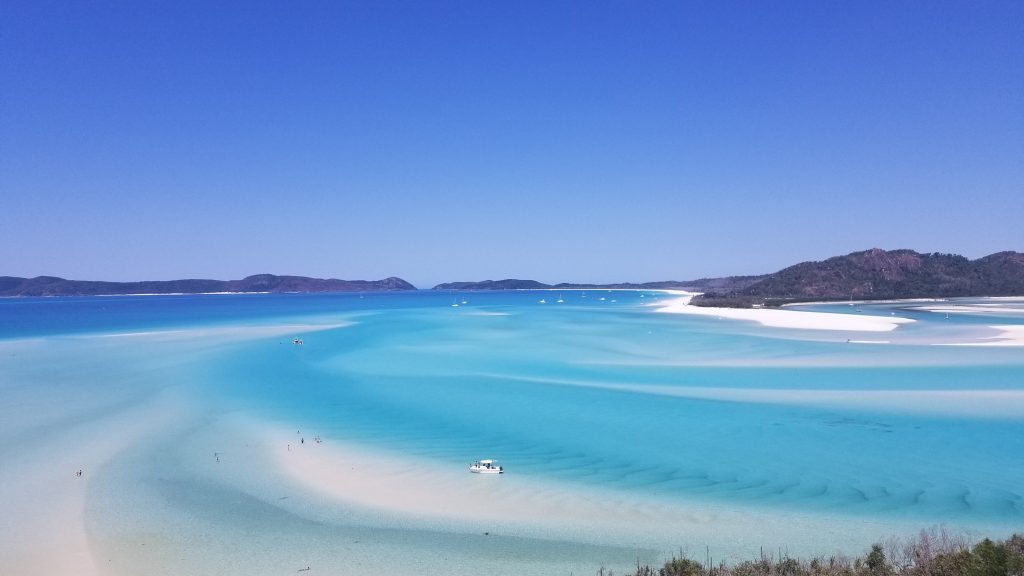 After getting our pictures at Hill Inlet we took the boat to Whitsunday Island where we got off to enjoy Whitehaven beach. Once again, this experience was almost indescribable as the sand felt entirely different from any sand I’ve felt before. Since it is made of silica the sand does not get hot from the sun, is incredibly soft, and can be used to exfoliate skin. No more sand is being produced, however, making the Whitehaven beach sand incredibly valuable. To protect the sand there is a no-questions-asked fine of $7,123 USD if you are caught taking sand from the Whitsundays. Needless to say, I didn’t think a small souvenir would be worth that cost so I left the sand where it belongs.

On Whitehaven beach is where my tour group also ate our lunch and I was surprised to find lizards all around our dining area. These were not small lizards either, rather, they were lace monitors which are the second largest lizards in Australia and among the largest in the world. The ones that surrounded us were around four to five feet long, and they do have razor sharp claws, teeth, and are venomous, although our guides assured us that they wouldn’t actually bother us as long as we tried to ignore them. I don’t know if you’ve ever tried to ignore a four foot lizard licking your foot while you eat food they are wanting but it isn’t easy. After a getting licked a couple of times while I was sitting down I extended my leg to raise it into the air. The monitor then darted underneath the bench I was sitting on and smacked my leg with its tail. I was a bit shocked by what had just happened while the guide laughed at me and said “she’s got a bit of an attitude, doesn’t she?”

Our guide was a hilarious middle-aged guy who with some aboriginal background, and while we ate he kept reminding the lizards of that fact. He would tell the lizards “If you bite me, I’ll bite you and I can legally do it too!” Not everyone was phased by the lizards though; in fact, the same Aussie guy who showed me the shark walked up from behind one lizard and gave it a quick pet. The lizard did not like that one bit and as a shiver ran down its whole body and its head whipped around towards the Aussie guy, I was feeling quite sure that our trip was about to be cut short. Fortunately the guy backed up a few steps and walked away leaving my friend and I sitting two feet away from an angry monitor, but we all made it back to shore unscathed. 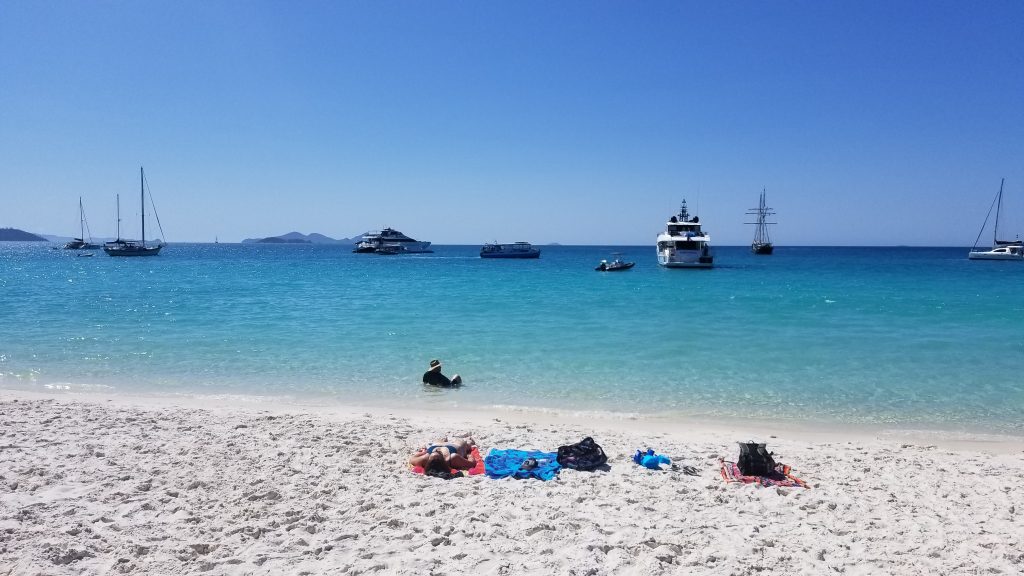 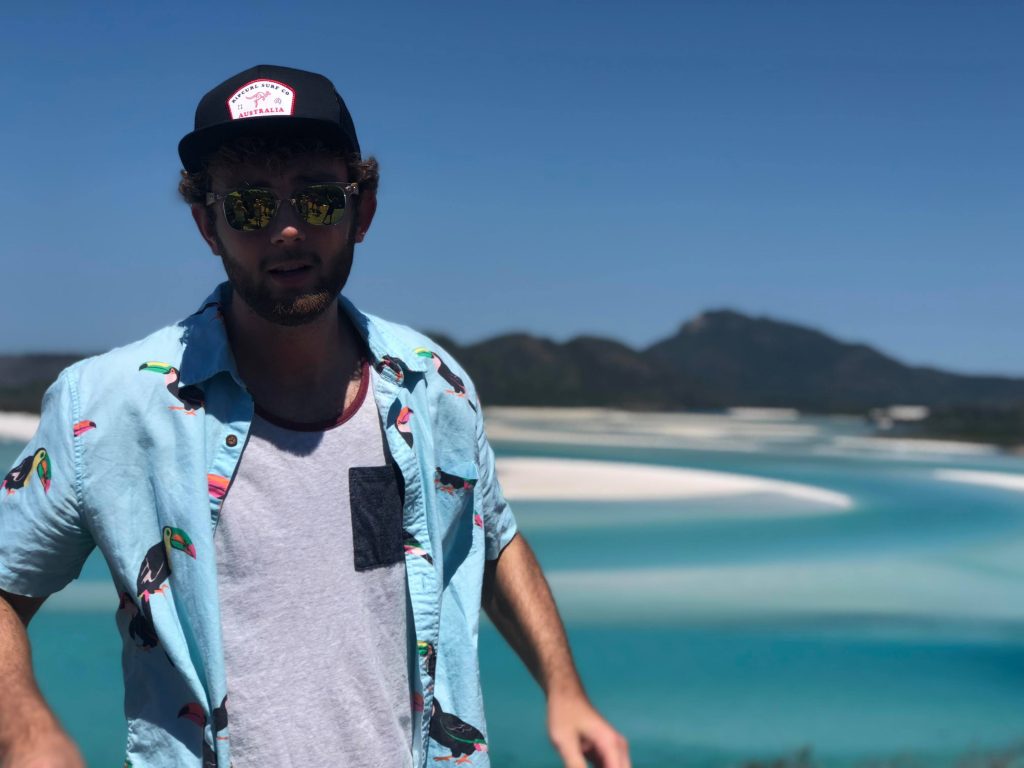 In the end, the Whitsundays turned out to be a paradise unlike anything I have experienced before. From the water to the sand to the wildlife, the Whitsundays felt surreal throughout the entire trip. I may not be able to afford to see Melbourne, but I certainly cannot pretend that I made the wrong choice by going to the Whitsundays. As I left Airlie Beach and flew back into Sydney I caught myself sighing as our plane touched down. Airlie’s temperature was so perfect that returning to the grey skies and rain of Sydney led me to think to myself “Well, back to dreary ole Sydney, I guess!” I then had to laugh at myself since never in my life would I have considered myself having that thought. It’s amazing how quickly new places can begin to feel typical and not quite as extraordinary as they once were. Then, as my train passed the Opera House I felt that magic return once again — I’m in Sydney.