This past weekend was a long travel weekend, so we had Friday off of classes.  On Thursday night, I flew with two of my friends to the city of Chengdu (成都) in the Sichuan Province of western China.  We originally decided to go there because it is the only place in the world where you can hold a panda, and there are other awesome sights as well.  It turns out that holding a panda is $300 US dollars per person.  Our flights cost less than that.  Needless to say, I decided not to do what I had gone to Chengdu to do, however, it was the other unexpected things that made the weekend so awesome!

My favorite moment of the weekend was one that was totally unexpected, not usually considered at all desirable, but absolutely spontaneously hilarious.  Three friends and I were riding back from the Sichuan Opera when our car broke down.  Straight up stalled out in the middle of the road.  Out we got to push.  If the sight of four laowai pushing a van down the street wasn’t enough, a bus pulls up beside us and stops at the intersection.  There were probably about 30 Chinese people on board who were all staring at us, some of them literally, with mouths wide open.  We could not stop laughing.  They all looked so confused, and the absurdity and adrenaline rush of the situation made everything that much funnier.  I will never forget that, totally unexpected or planned, yet hilarious nonetheless.

–Three things I appreciate about flying in China: free food, free checked bags and you don’t have to take off your shoes to go through security.  Meet Marytha and Alyssa!  We had a great weekend together. 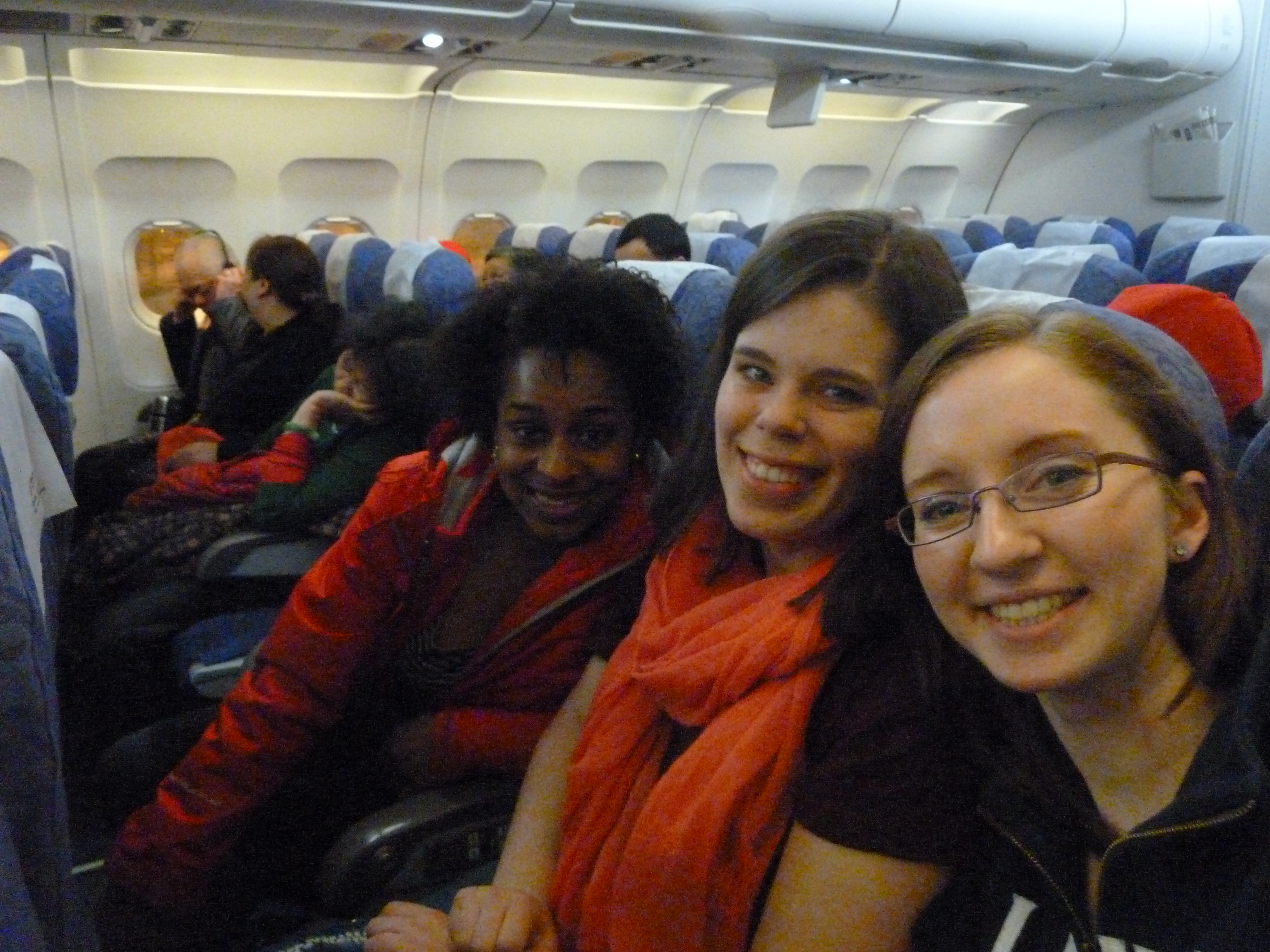 –We got in the car to go on our day tour of the Leshan Buddha (the largest Buddha in the world) and the pandas to find some kids from IES Shanghai.  What are the chances of that?  They were a fun group to spend the day with.  The Buddha was pretty magnificent, and the pandas were oh so fun to watch even though I was bummed about not holding one. 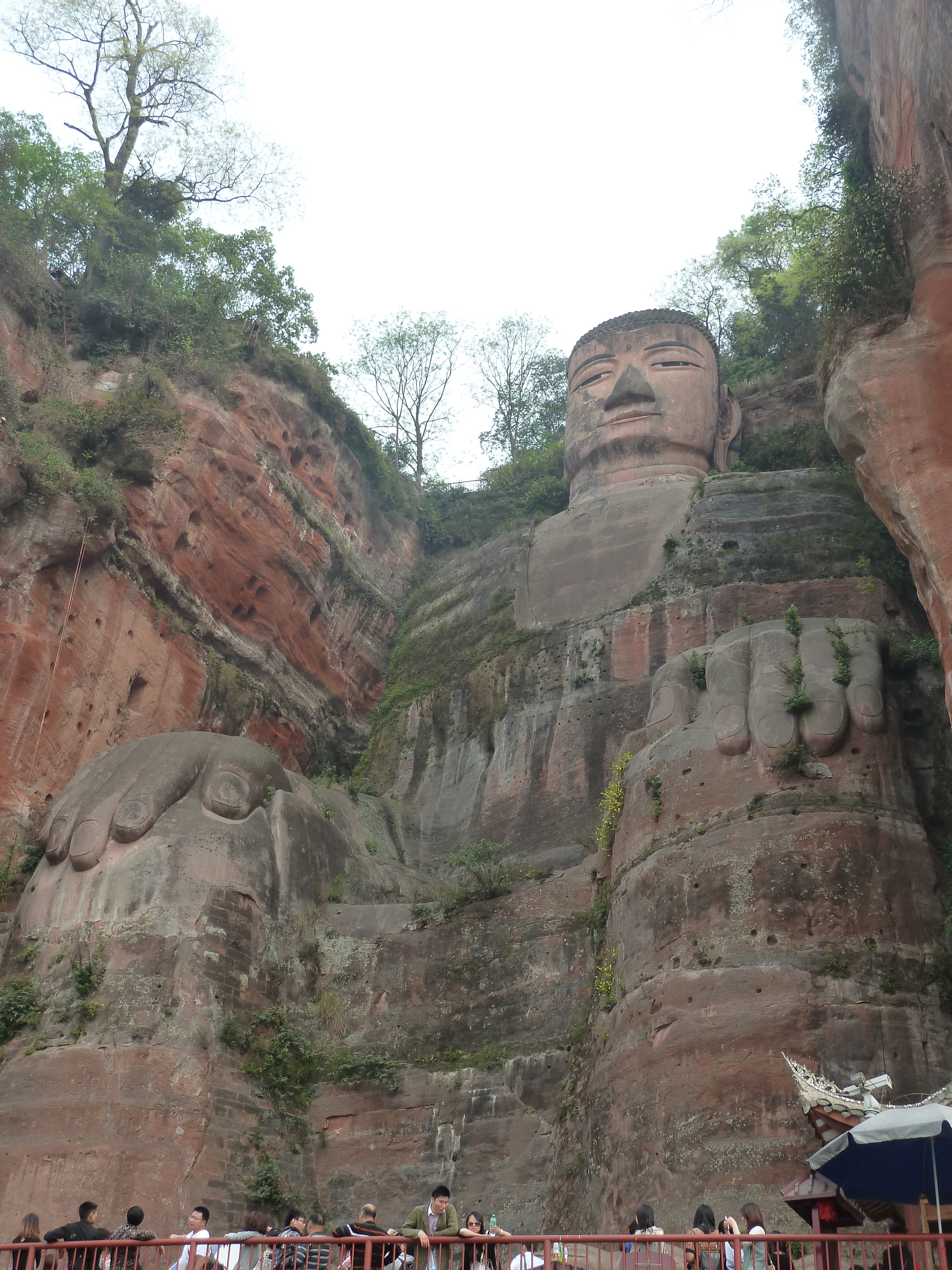 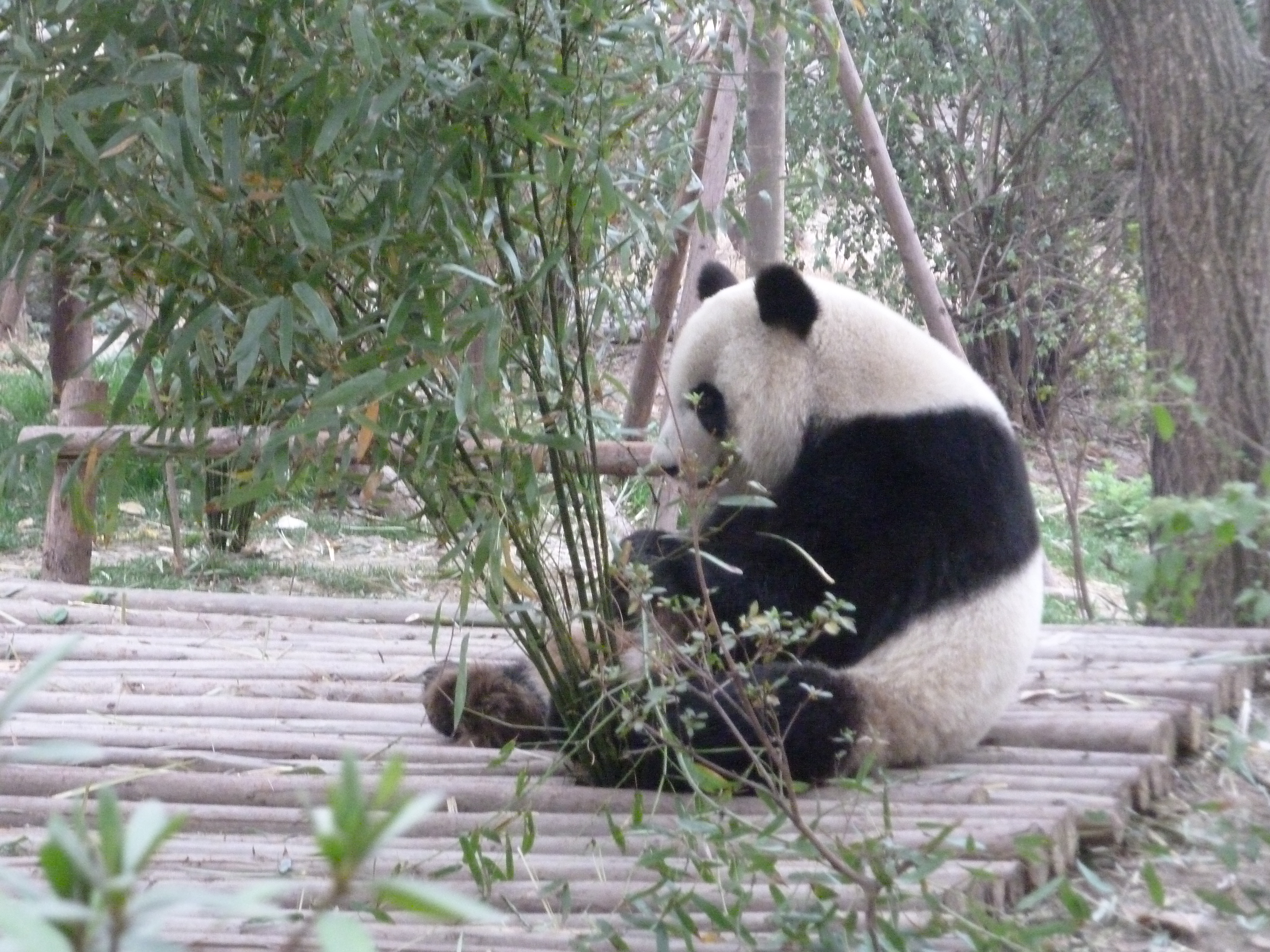 –One of my friends at Hope, Yijun, is from Chengdu.  I got to meet her parents and they treated us to a delicious dinner with true Chinese hospitality!  It felt like being at home with family, they were so kind!  It was a very unique experience that I wasn’t expecting to have, but it might even have been why I came to Chengdu.  I’m so thankful that everything worked out.

–Wandering random shopping streets with no goal or time frame in mind.  Sichuan is known for SPICE.  The one spicy dish I ate I also managed to get in my eye.  Needless to say, I’m still a spice wimp. 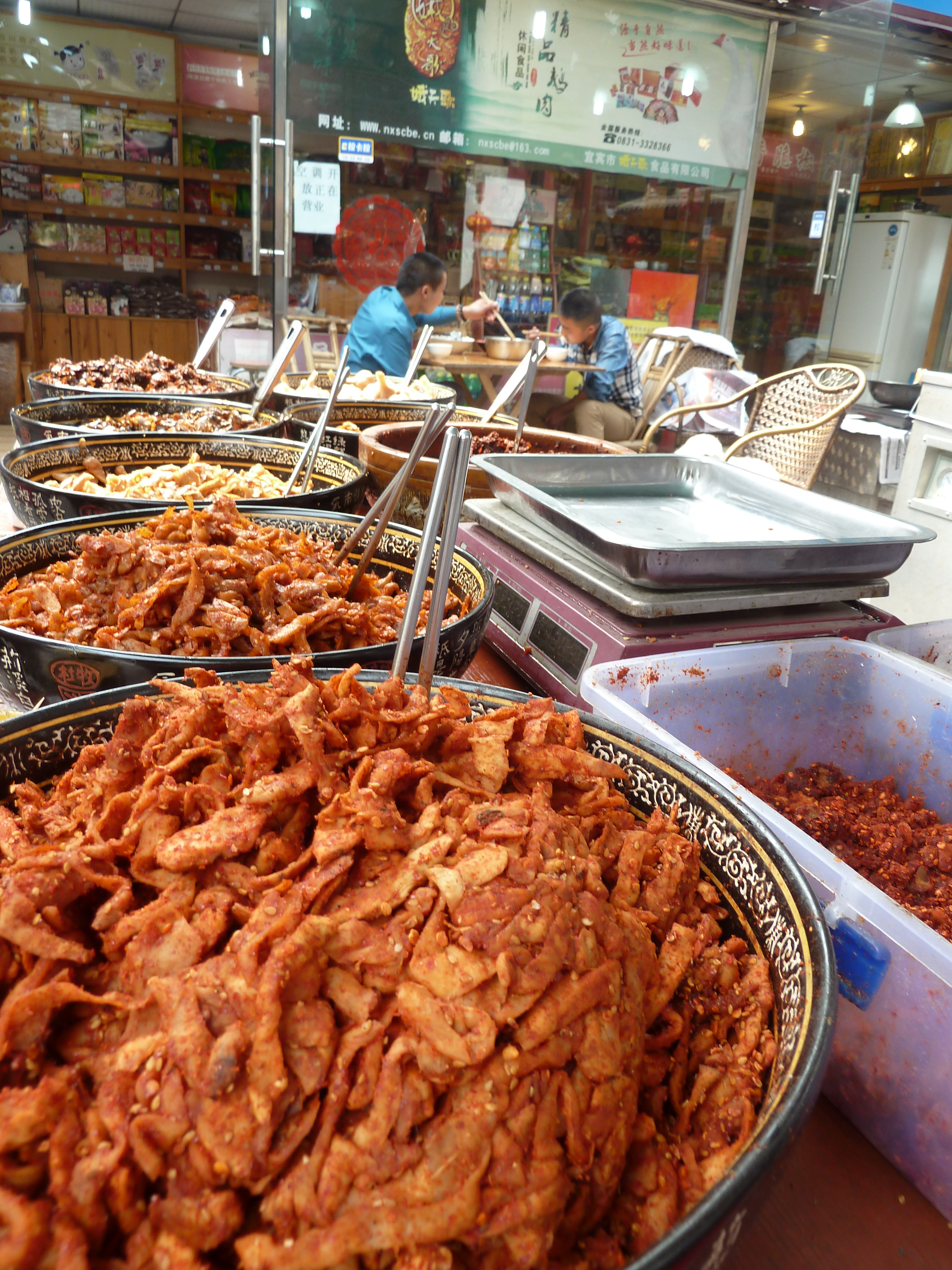 –Something that I LOVED about Chengdu was how many green trees there were (Beijing basically has none right now).  We also checked out a monastery that had some beautiful gardens away from the city.  It was interesting to observe some Buddhist religious practices and I definitely want to learn more about Buddhism as it is a belief system that has greatly influenced Chinese culture. 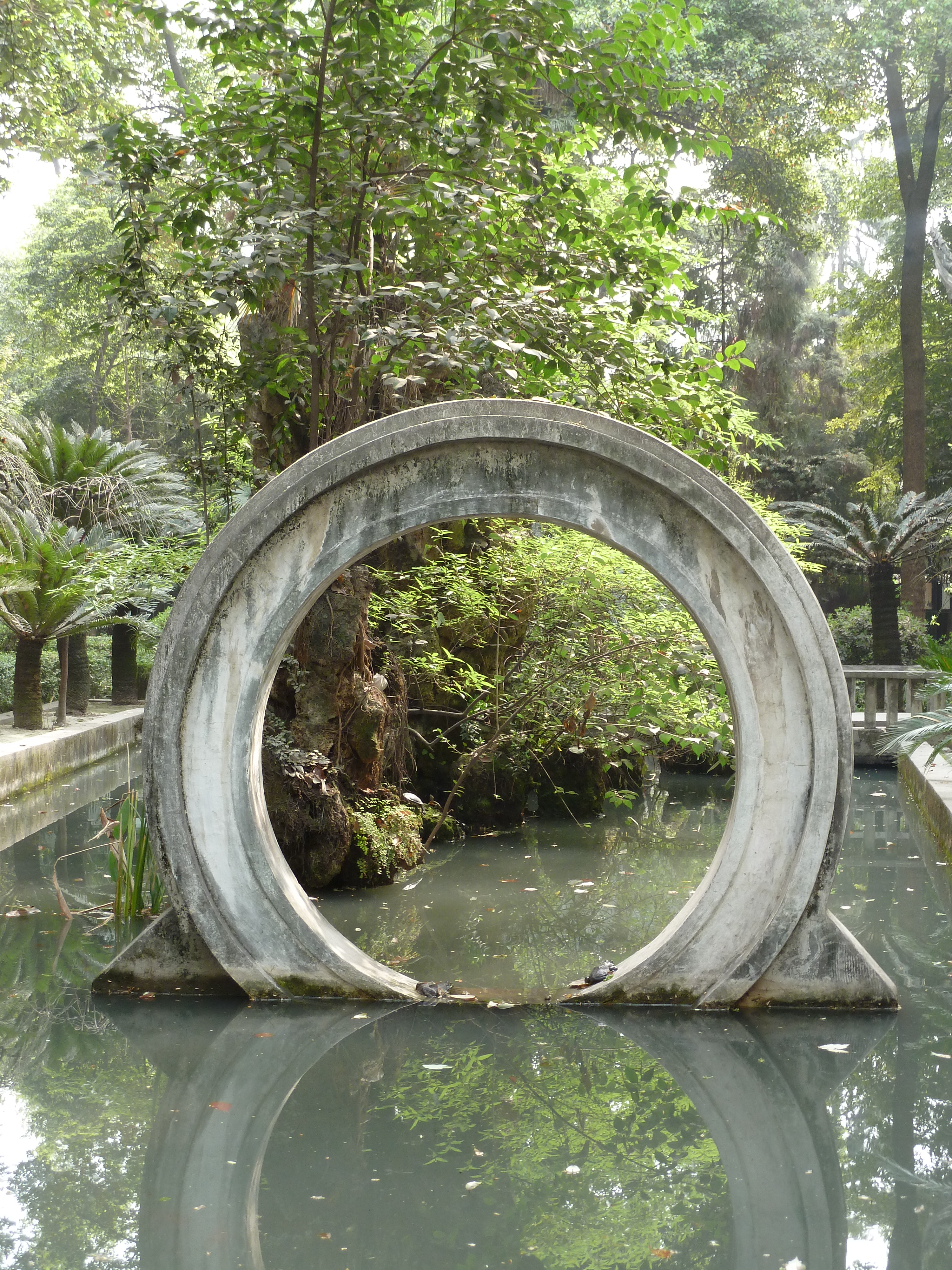 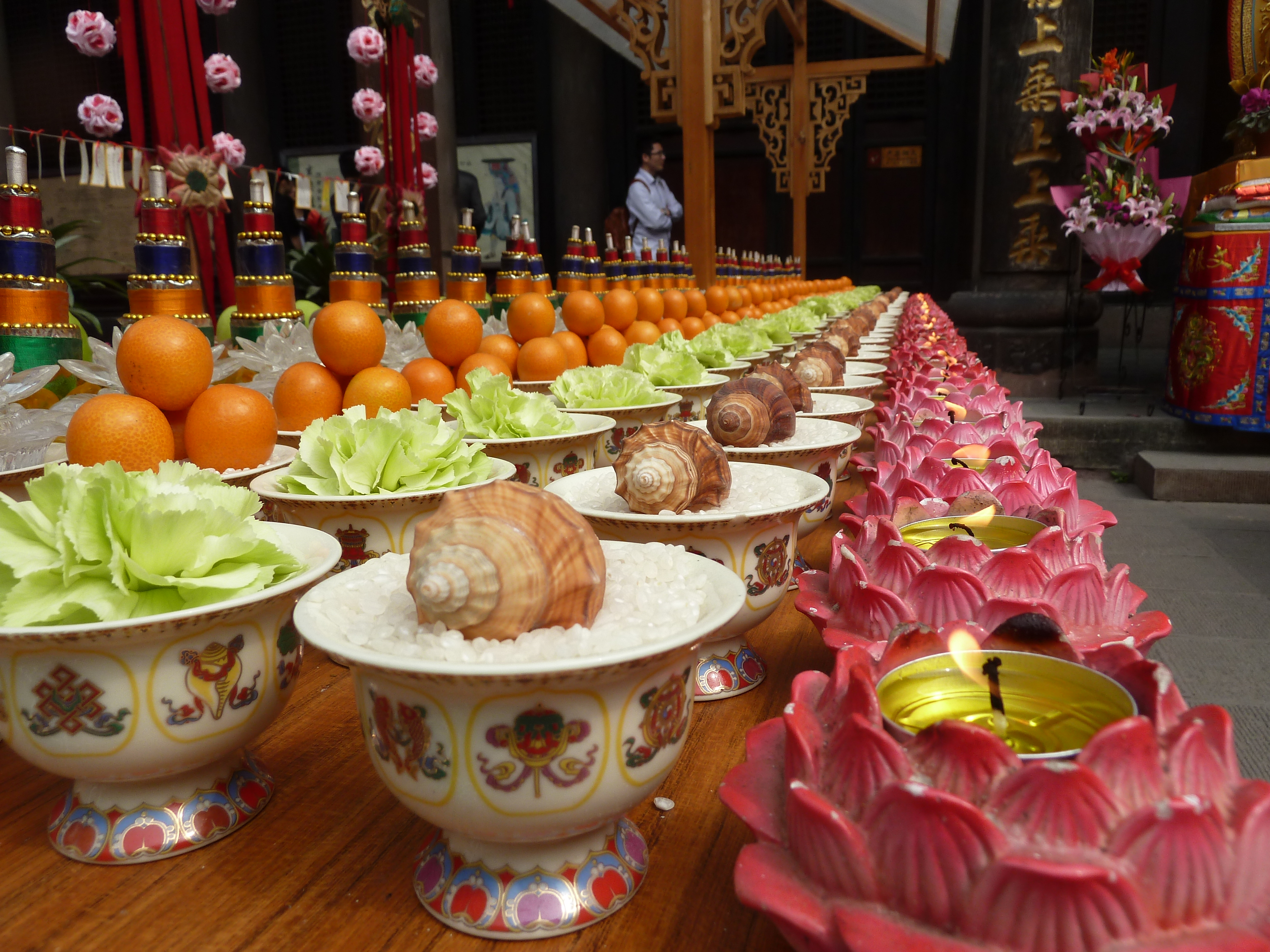 –On Sunday, Marytha and I were going to go to a nearby mountain but train tickets were sold out by the time we got there.  We decided to explore some parks in Chengdu and had an absolutely awesome day!  We paddled a canoe (a midst many greetings of “Hallo!” from our fellow Chinese mariners), danced with Chinese people (including to “Gangam Style”), and rode this suspended bike ride at the part of the park that had a mini amusement park.  It was so glorious to be in such beautiful creation and to enjoy it with many Chinese people as well.  Some sort of white puffy pollen was floating in the air, like snow, which only made everything feel more like a fairy tale!  We even managed to run into Alyssa and her friend without planning to at all. 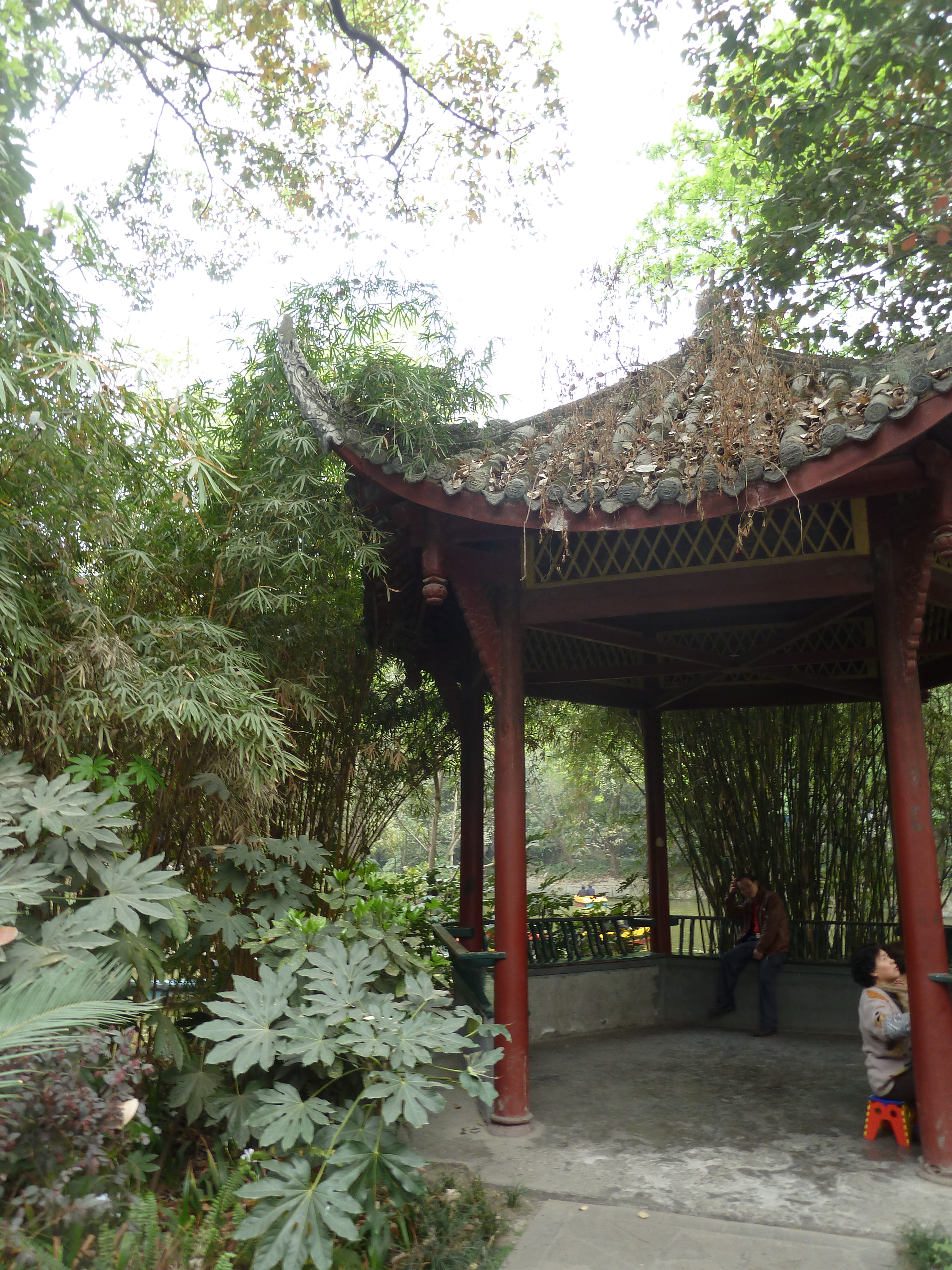 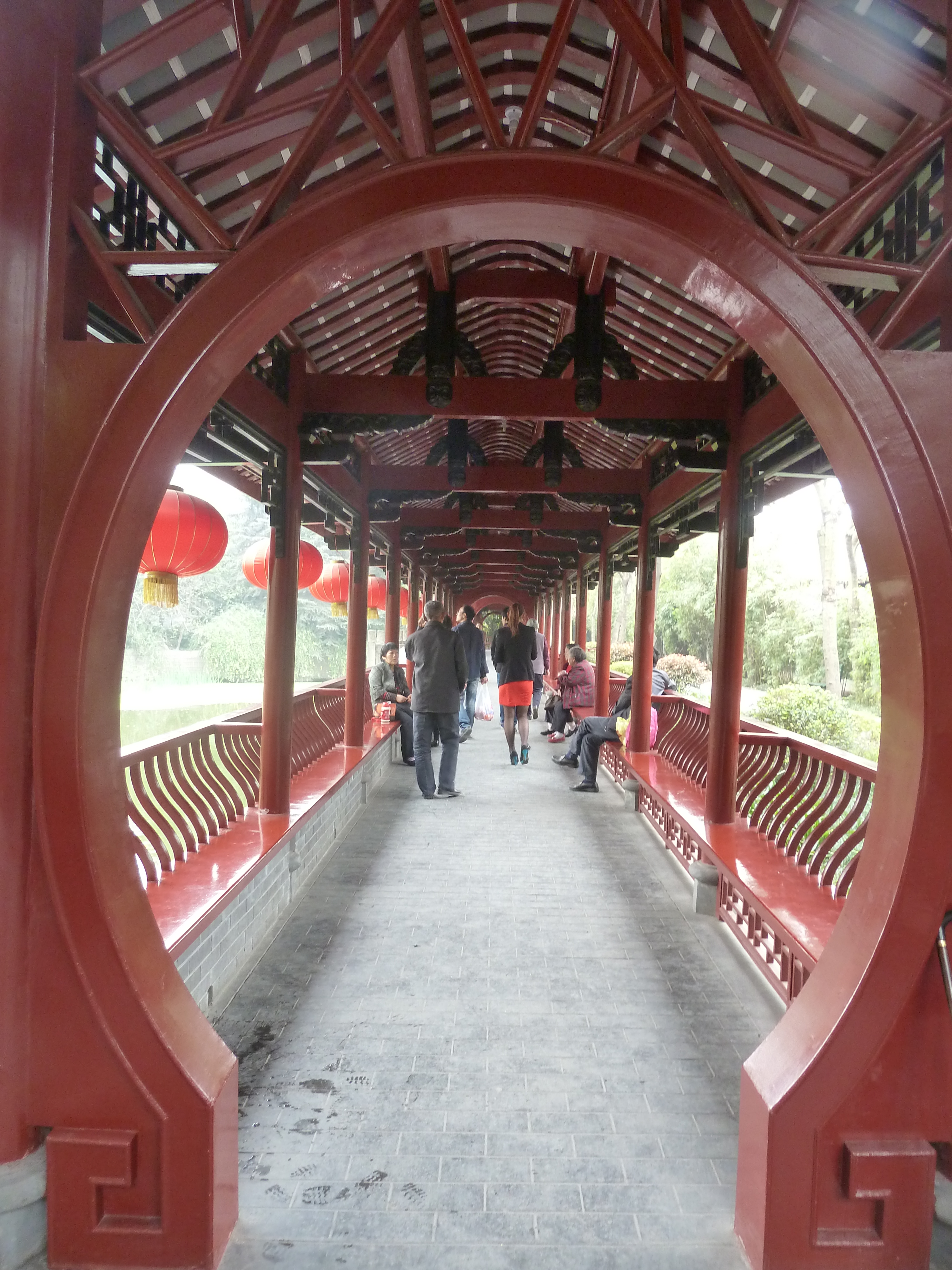 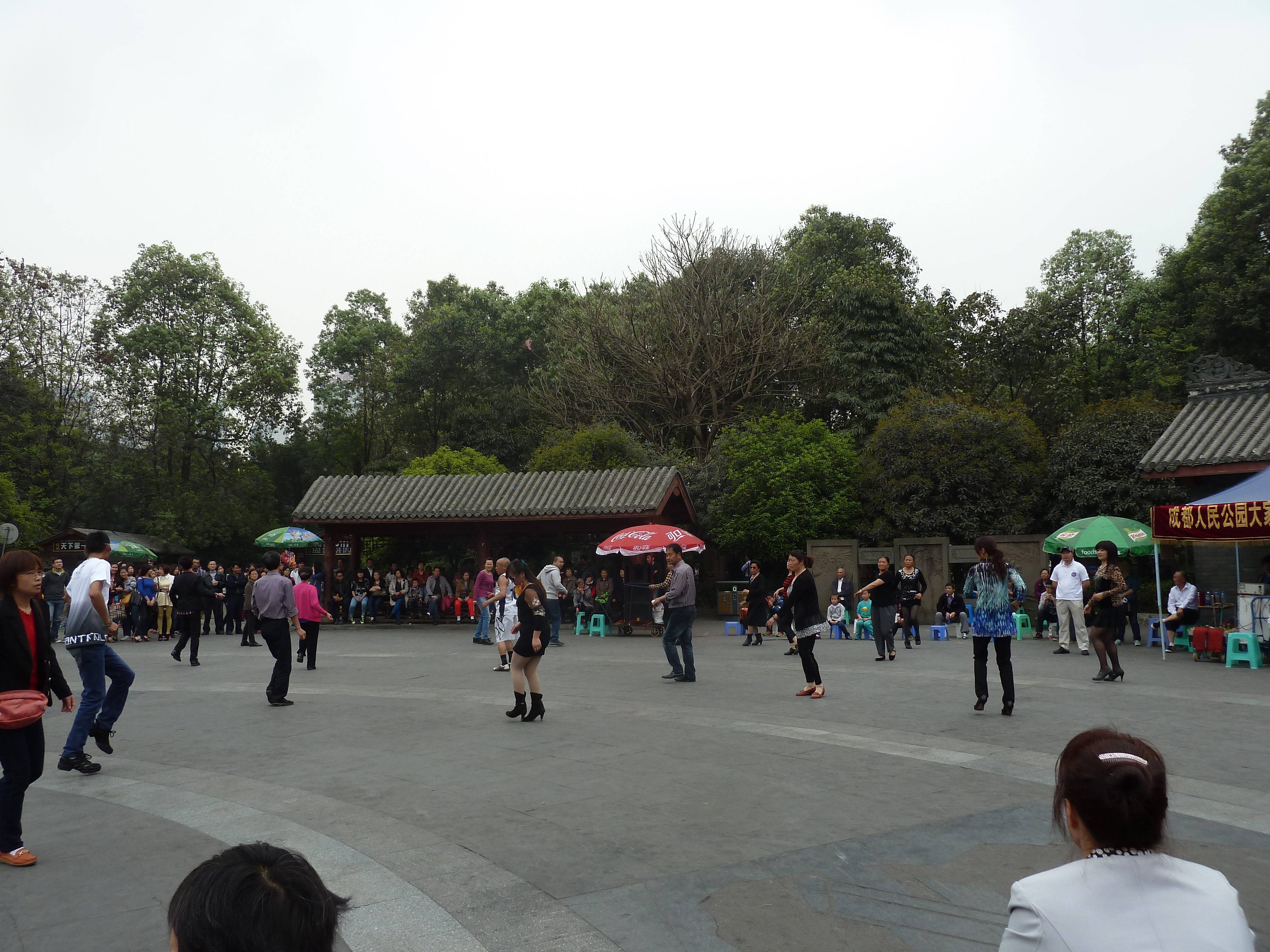 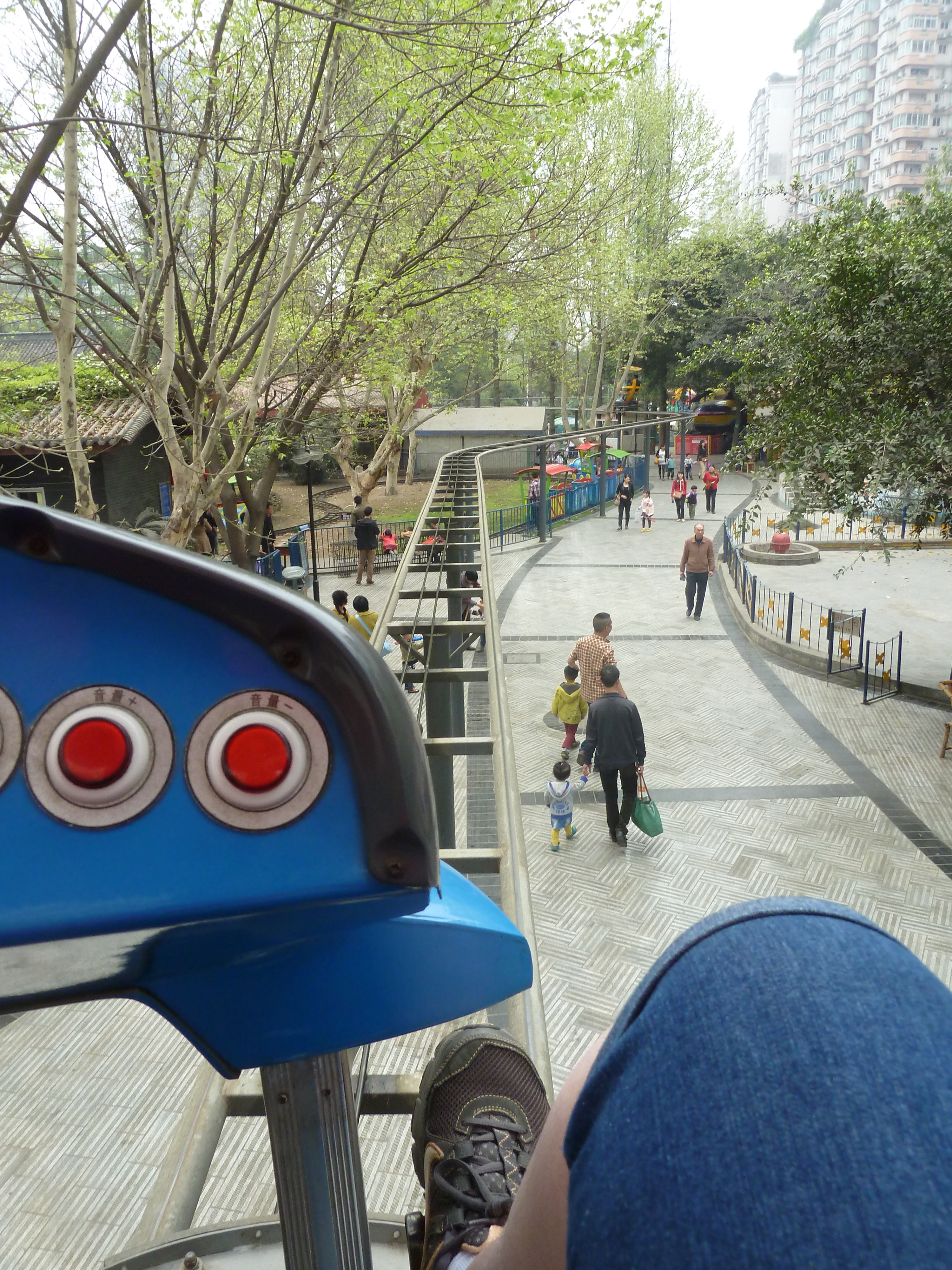 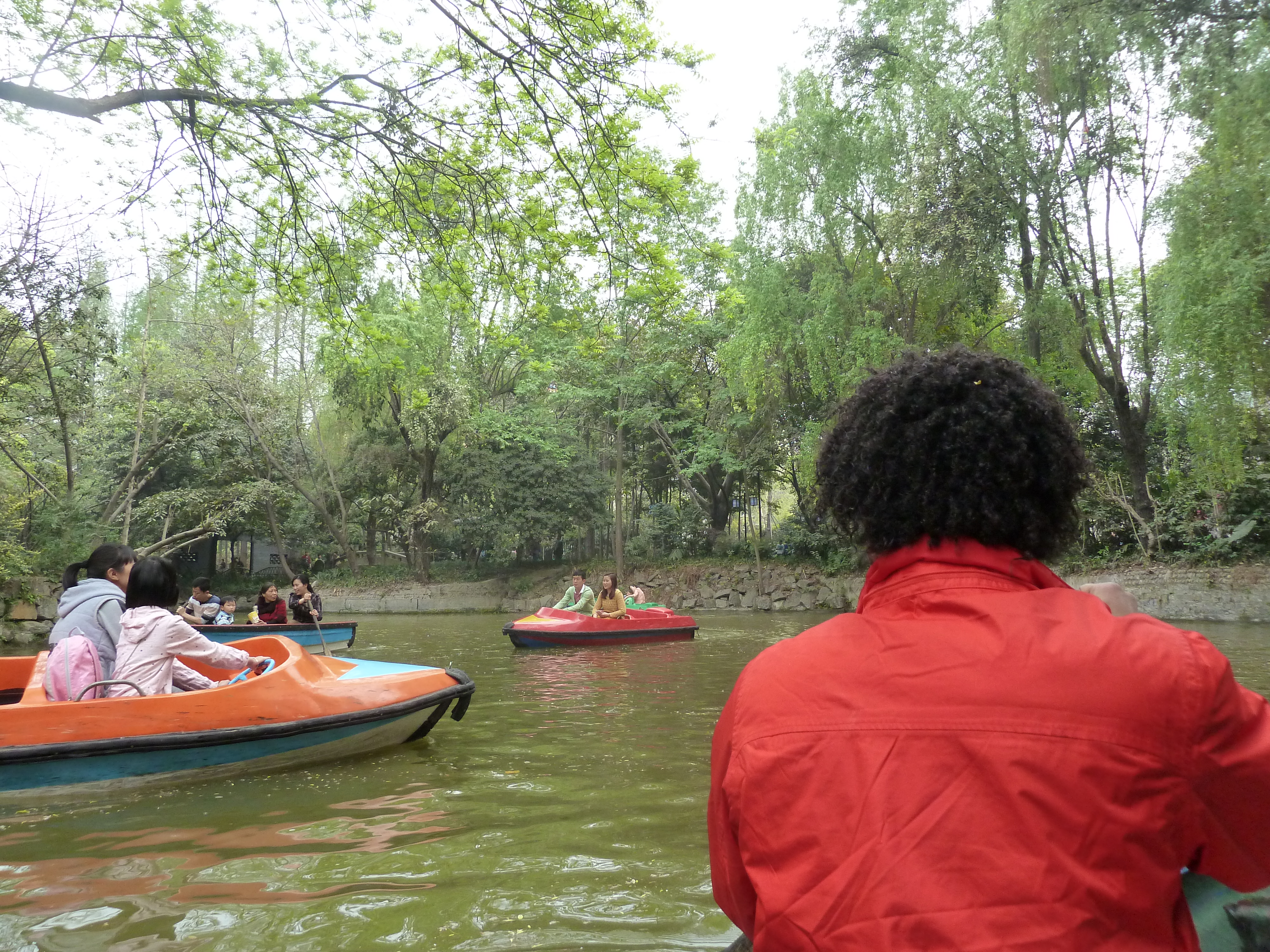 Chengdu was an absolutely beautiful city, and I’m so glad that I made the choice to go, even though I didn’t hold a panda, train tickets were sold out, the car broke down… it was still an awesome weekend, with the best memories in the unexpected & beautiful.