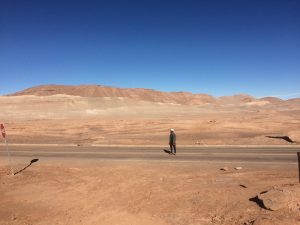 Saturday morning started like any other would in the driest desert in the world.  Yes, I was in the Atacama Desert of San Pedro.  It was as if the desert had a thirst so severe that could never be quenched even by its recent heavy rains.  Its travelers feel the same as water is hard to come by if you aren’t in its main pueblo, San Pedro de Atacama.  If the aridness wasn’t enough to make you fatigued from thirst, its high altitude would sure make you winded and short of breath as it made me on my ill-advised biking exodus on that eventful Saturday.  So let’s begin my journey at 7:00 am when I woke up that morning.

7:00am – Alarm blares loudly on top of the night stand below me by the lower lower bunk in my two bunk bed hostel.  Disoriented and unable to see, I stumble down my bunk and turn off my the alarm jamming my finger all over the screen until I diffuse its annoying ring. Remembering what I had woken up so early for, I quickly get ready and quietly walk out the hostel room so as to not wake up my friends sleeping.  Still moving at a slow pace, I was not dressed until 7:30 am and I was out the door by around 7:50 am with my bike that was rented out until 1:00 pm that day.  So, the idea was that I would be finished with my biking route at Catarpe park by 11:00 am with time to arrive back at the pueblo and return the bike and make it back for my next tour to Valle de la Luna.  So according to the map, it would take me about about 3 hours to visit Pukara de Quitor and about 2 hours to visit Petrogupos 8 km north from the entrance.  But my time estimations were completely wrong.  I was barely able to get back on time.

So I started biking that morning, heading for Catarpe park and the very first thing I was greeted by were a flock of sheep following a man on a horse. 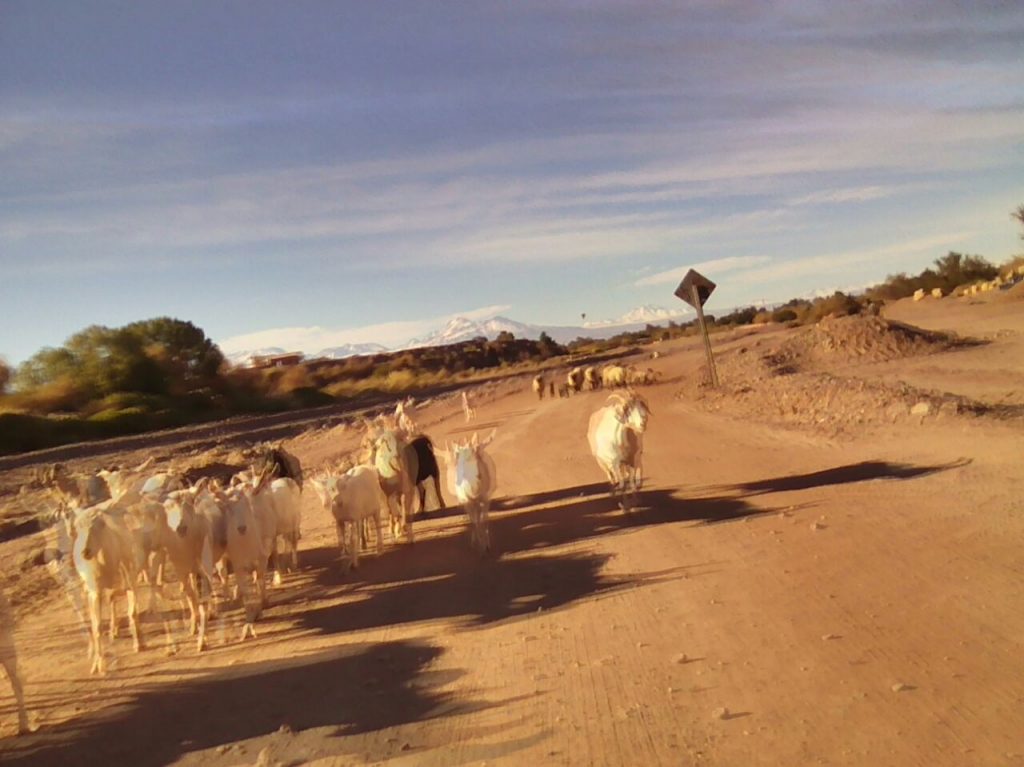 He greeted me with a nod and I biked in front of them.  And so I continued for a brief 30 minutes until I found a fork in the road.  At the fork, there were signs to head to either “el Tunel” (tunnel) or towards the chapel.  So caught in between heading towards the tunnel towards the Wide Rock or Piedra de Anchos and headed towards the Saint Isidro chapel (Capilla San Isidro).  And so there, my real journey began. After I followed that path, I ran into what looked like a red chasm.  My curiosity peaked as I though this was the tunnel but I would later find out that it was not.  At this point, the soil began to turn powdery and I was surrounded by tall red walls.  Suddenly, I heard galloping noises in the distance and I scurried off my bike to find the source of the noise to encounter 4 horsemen.  After taking a brief snack break, I jumped back on my rented bike to catch up with them but just as I began continuing my journey the steepness of the path began to dramatically increase making the biking unreasonably difficult so I decided that I would go on foot until I found the tunnel.  Given how exhausted I was, I decided to leave my bike and lock it to the rock as I was not sure if I would encounter more steep trekking.  After clearing the long dark tunnel, I see a large opening that took me about 2 hours to clear and finally find the Wide Rock which was just as underwhelming as it sounds. Disappointed by this landmark, I continued walking north until I found another opening that allowed me to see a freeway in the distance with moving dots distorted by the sun.  Around me, I also found destroyed Chilean PDI police cars that seemed to have been blown up.  Although wanting to continue, I decided to head back as I had a scheduled a tour to make it to.  After returning to the Wide Rock the opening looked completely different and in a matter of minutes I was lost. 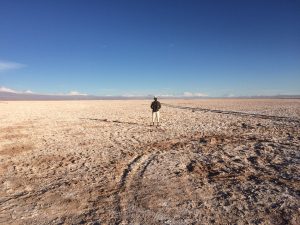 After frantically looking for the path I took, I found a man striding speedily in the distance with a hiking stick.  He had been moving so fast that I thought that he had been going at a biking speed.  Afraid that I would get lost without his help, I ran has fast as I could to catch up with him.  He stops as I he hears me yell for his attention and looks shocked to find another traveler on his path.  He welcomed me with a hearty handshake and invited me to walk with him.  As we begin walking he begins to tell me his life story, beginning with telling me that his name was Hugo and that he was lost as well.  He was on his way to Alaska from the south of Argentina as a year journey and sabbatical from his life as a video-gamer in Spain.  He said he was tired of his life as a gamer and wanted to pursue adventure and take advantage of his youth.  He had a cheap budget that consisted of spending a few dollars a day on yogurt, water, and ham and cheese sandwiches and was hoping to make it last for the entire trip towards Alaska.  I told him about my reasoning for being in San Pedro and explained that I was studying abroad and that I wanted to go on one last trip.  And so, we continued talking for the next few hours until we began to find ourselves even more lost.

Certain that we could find the way back to the tunnel, we were even more lost within an hour so we tried several times to climb up higher points to scope out any other travelers.  Luckily, we found something in the distance on a high path.  Shouting loud for help, it stopped moving. Jumping down from where we saw it, we ran up to whom we found out to be be a traveling woman.  It was my hostel host.  I could not have been so relieved and surprised.  Calling out my name before I could make out her identity she asked if I was lost.  I answered with little breath, yes and that I needed to take Hugo to the tunnel and she just pointed to her right as the tunnel was sitting right below us.  And that is how I was saved from desertion in the desert.