If you know me, you probably know that I’m studying this fall at the University of Aberdeen in Scotland. However, my parents and I traveled abroad early so that we could have a little UK vacation before moving me into “uni.” Here’s a little bit of what we did and saw! 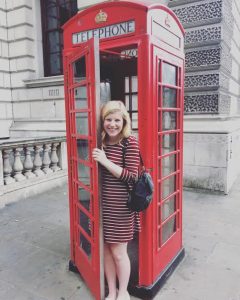 We spent most of the first day traveling around on a hop-on-hop-off bus. It took us all around the city, and even though I was having trouble staying awake, it was easy to tell that London is gorgeous. It’s full of old charming buildings surrounded by glass skyscrapers. One of the best examples of this is the Tower of London. This old structure is situated in a modern area of the city and was home to many royals and executions back in the day. This was so fun to tour, and the “yeomen” that work there were incredibly interesting to talk to!

Another one of my favorite parts of England was the Harry Potter Lot Tour. This Universal lot is located a ways outside of the city, so a tour bus took us there. Guys, if you are a Harry Potter fan, this is the place to go. It has everything! Costumes! Diagon Alley! The Great Hall! Moaning Myrtle’s robes! Dumbledore’s beard! The Knight Bus! The Hogwarts Express! Everything! I totally went crazy at this place.

Another highlight of our trip was seeing Shakespeare’s Globe. If you don’t know, this is a recreation of Shakespeare’s original theatre, but everything is made to look authentic. We took a tour and got to go around the building and in the actual theatre, and the best part is that we saw actors warming up for their matinee production of MacBeth. They were fighting with swords and shields and rehearsing lines on the stage. I wish I could have seen the show!

One show that I did see, though, was Harry Potter and the Cursed Child, and OH MY GOSH. IT WAS AMAZING. I read the script before I even knew I would be able to see it, so I went into it knowing the story. However, the play still shocked me. The “magic” made me do double takes. The actors were incredible (especially Anthony Boyle as Scorpius Malfoy). I wish I could see it every day of my life. If you have any doubts after reading the script, try, try to see the show performed live because it’s full of all the wonderful J.K. Rowling magic we know and love.

We saw other things in England as well: Churchill’s war rooms, The National Gallery, Shakespeare’s birthplace in Stratford. We even got to see the Chatsworth House (aka Mr. Darcy’s Pemberley Estate from the 2005 Pride and Prejudice movie!).

So my verdict on England is that it’s absolutely fantastic. I loved London and its history (even its underground trains!). The English countryside was also nothing short of lovely. However, I’m not studying in England. I’m spending the semester in Scotland, which, from what I can tell already, is just as exciting and beautiful. Hopefully I can perhaps zip over to England again this semester, but until then it’s goodbye London and hello Aberdeen!