Sometimes running really is the only thing that makes sense. No matter where I am in the world or how stressed I am, I always find time to run. 45 minutes, my Asics and suddenly everything is okay. 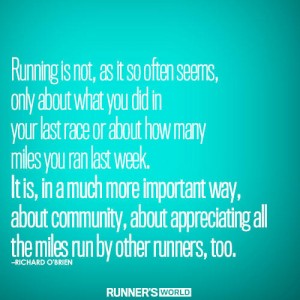 Running really IS about community and it is one of my favorite aspects about the sport. My favorite part of the day in high school was always on runs during cross-country or track practice where we would all share the high and low of our day.

Running clubs exist in most cities and even in smaller towns and cities. You can find clubs that are more competitive, more social, more focused on racing and everything in between.

I knew I wanted to join some sort of running team when I came to Belgrade. I heard about BURT the second week I was in Belgrade. A former SIT student who stayed in Belgrade after the program and is working here and studying for her masters sent an email to all the current SIT students about some activities in Belgrade she was involved in and BURT was one of them. She also introduced me to a church her, but I’ll save that for another blog.

BURT meets four days a week, in various locations throughout the city which means I’ve gotten pretty good at the public transportation system. It has also helped get to know the city and explore certain neighborhoods I might not see otherwise.

Most of the runners are Serbian and they are in their mid-20s or early-30s. There are also a number of other internationals as well. There is a group of several women from various countries in Europe such as Finland, Sweden and France who are completing a young professionals program here and it has been really fun getting to know them. I actually live down the street from a few of them and have run into them at various events throughout the city.

BURT is not only about running. They are also a very socially conscious group. this past weekend they organized an event surrounding the refugee crisis. This is a very big issue in Serbia as hundreds of refugees pass through Serbia everyday to reach their final destinations in Western Europe. Recently, many Balkan countries have talked about closing their borders(Hungary already has). This would cause many problems as these refugees would then be stuck.

So on Sunday morning BURT decided to hold an event. Unfortunately I was unable to attend because I was at church but a few of my friends attended and shared this article with me.

Please note, you will need to open it in Google Chrome as it is in Serbian, but Chrome will automatically translate it.

The event was called “Run for Peace.” Members of BURT and various other running groups ran through the main parts of the city while tanks followed behind. This was meant to symbolize the fact that refugees are constantly fleeing violence and conflict and are in fact running for their lives.

I am looking forward to other events BURT will hold in the future and getting to know some of the other runners. Many of us are running the Belgrade Marathon in April and are in the middle of training for that right now. I am still deciding whether or not I want to run the marathon or the half.

I don’t have any pictures from BURT but they have an Instagram and they take a picture every practice so check it out and see if you can find me!