This past weekend, I jumped off a cliff!

Well not exactly, but it was still really high. Our group went out to a place called Wadi Shab on Saturday. We also visited a place called the sinkhole. Suffice it to say, there were a lot of rocks and water involved. A wadi is a stream bed that is typically filled by rainwater. Wadi Shab is one that is often filled with water (I think). However, before we actually got to the wadi, we had to hike. And even before the hike, we had to take a short boat ride to get to the side where the hike began. It wasn’t the longest or roughest hike, but it was fairly difficult. The only thing that made it hard was the fact that almost all the rock we walked on was smooth and slippery. On top of all of that, I am very afraid of heights; just over 70% of the hike was on steep cliffs. I could be exaggerating, but it was a lot of single-filed cliff maneuvering!

Once we got to the wadi, we got into our swimsuits and began wading through the shallow water. It was about a five-minute trek before we got to a point where we could swim. Yet, just like the hike to the wadi, the water was littered with large mossy rocks, and many in our group (mainly me) took a few tumbles after slipping off the slick surfaces. The only upside was that the water was there to catch us! We finally made it to the deepest part of the wadi, where there was a small rope attached to the rock outcropping. I, along with one of our director’s young girls, took turns climbing the rope and leaping off the edge of the rocks! After a bit of the rock jumping, my classmate Anna and I ventured into the cave just a few feet from where the girls and I were jumping.

To get into the cave, we had to swim through an opening that was barely wider than my shoulders. We ended up doing a kind of side crawl along the wall of the cave opening. We used a very tiny ledge and moved in a single file. The small entrance gave way to a large cave with a small waterfall inside! Right where the waterfall was, there was a much larger rope that many people were using to climb up the waterfall. I did not witness many people going all the way up the rope because, I assume, the rock was extremely slippery and the rock was quite steep. Most people made it halfway and would jump from there. It looked to be about 8-10 feet above the surface of the water! I decided to pass on the opportunity to jump from that rope, but I did enjoy just swimming around the cave.

After leaving the cave and spending a bit more time playing with the smaller rope, our group began heading back. We went back to our vehicles on, roughly, the same route. I decided to attempt a shortcut after getting a bit lost and ended up sinking thigh deep into a marsh that looked like grass! Luckily, I was still in my swimsuit and some shorts so very little damage was done. Well, except for my pride.

Once we got across the small river on the same boat, we went to a small Bangladeshi restaurant. We had quite the feast of stewed lentils, grilled fish, biryani rice, beef stew, flatbread, and the list goes on! Due to how deliciously distracting our lunch was, I had forgotten that we had one more destination before heading home. We got into the cars and made our way to the sinkhole.
At the sinkhole, a few of the women in my group and I decided to go down the three-ish flights of steps to the actual body of water. My friend Anna and I were the only two that decided to attempt jumping off the edge of the rock outcropping. I started out by heading to a spot I had seen a man climbing. After a few steps, however, I quickly discovered that I would have two options. The first being to turn around and try to climb up from the water (we had already tried unsuccessfully) or proceed with the second option (because I was stubborn and determined to make the jump) to continue this ‘hike’ down a balance beam width off hang. It started out just fine until we reached a boulder that took up all but three inches of the path we were heading down! I pretended to know what I was doing and I tried my hand at getting around this giant obstacle. It was only by God’s grace that either of us made it to the other side of the boulder, and didn’t end up falling into the very rocky part of the sinkhole. Finally, after going through all of that, we reached the place we were hoping to get to. Well, at least we figured it was far enough. After a count of three, I jumped off my second 2-meter cliff!

I really enjoyed seeing all the landscapes Oman had to offer, this past weekend. The water, the rocks, and the marsh! It was all so different and exciting, and I regret nothing I did; no matter how terrified I was. It helped to have gone on these adventures with people I can have fun with, despite my fears. The moral of this post is that I am now the new “Indiana Jones,” and you can find me jumping off rock formations in Oman in the name or heroism! (I’m fairly sure for copyright reasons I can’t actually say that, but I’m an adventurer now and I live on the edge)! 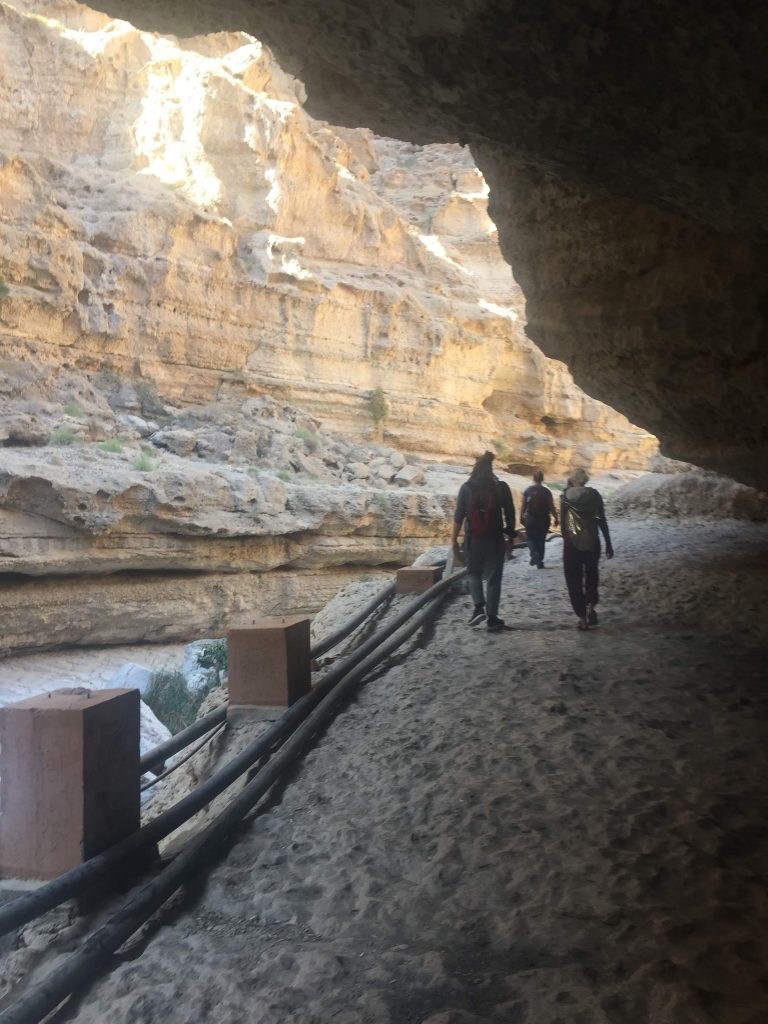 The scene from the hike before the wadi 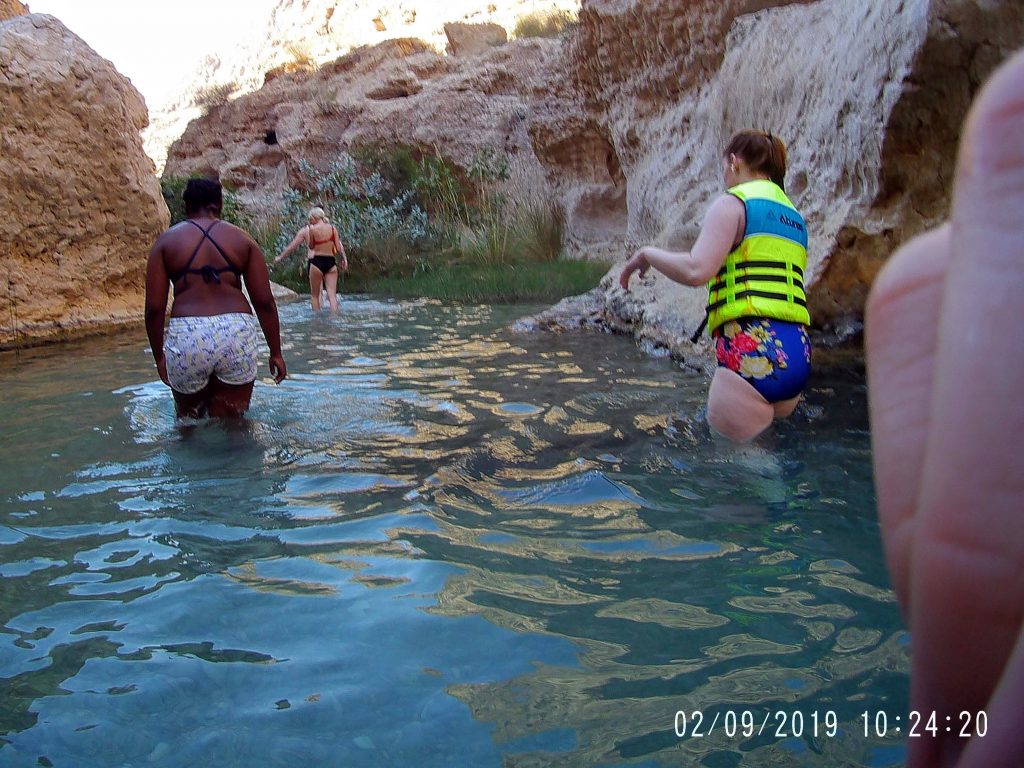