Not going to lie, I think that this has been the busiest week I’ve had so far this semester. I’m in the midst of papers and presentations while still trying to enjoy new experiences. It’s definitely preferable to not have a ton to do, but that’s what study abroad means: doing school work while taking on a new culture and new adventures. It’s a bit stressful right now, but it’s still great, don’t worry.

This past weekend was pretty packed with activities. It began on Thursday night when a few friends and I went to a food truck garden (super cool, has Grand Rapids vibes) to watch a soccer game. Soccer, or rather “fútbol” is a huge part of the culture here. Everyone LOVES fútbol and has great pride for the Ecuadorian team. We watched Ecuador vs. Paraguay and unfortunately we lost, but it was still a fun time getting to see a part of the culture that brings everyone together. 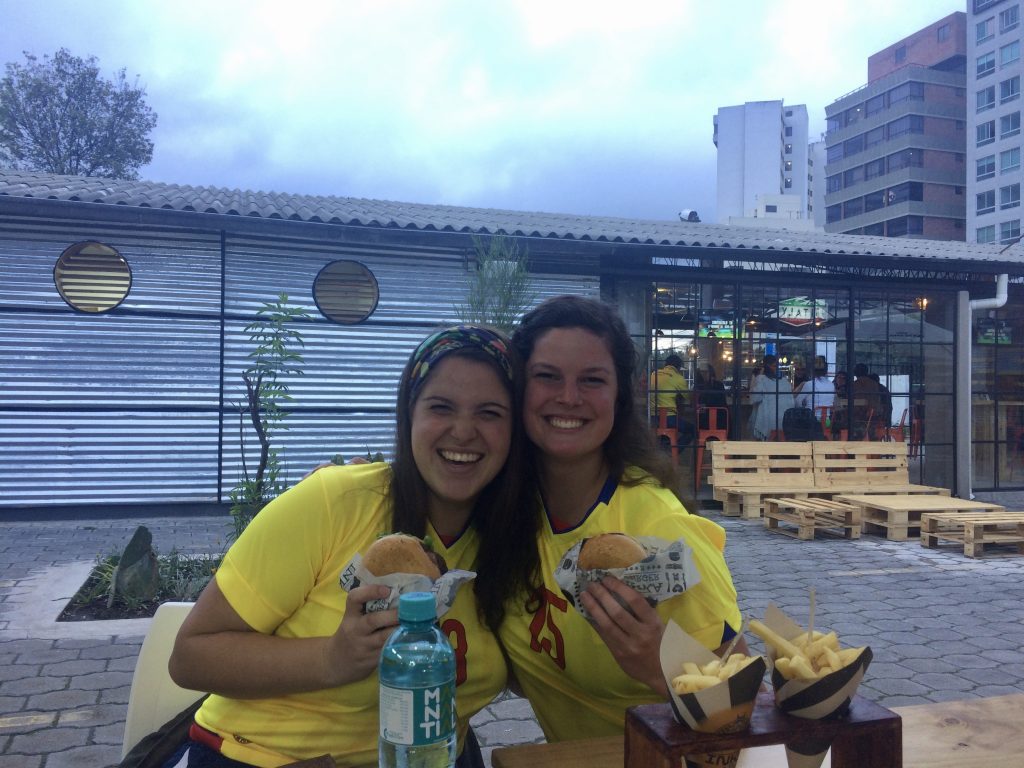 On Friday a group of us decided to hike Cotopaxi, an active volcano located about two hours south of Quito. We were all pretty excited because we heard that there would be snow, a rare thing here. In the Midwest, I know snow is the last thing you want more of, but I was looking forward to it because it’s a little piece of home I guess. When we finally arrived, the volcano was hidden in fog. I could barely see the people walking in front of me. Also, this hike was the hardest hike I’ve done so far. It was a straight incline the whole time, but luckily it took less than an hour to get to the top. The top really meant a refuge about halfway up the volcano because the rest of the volcano is closed to hikers (it’s pretty dangerous past that point.) Halfway through the hike it began hailing. It was kind of painful to be honest, but when we finally reached the top the views were beautiful. It was snowing at the top and oh man, I was filled with joy. On our way down it snowed the whole way and we even stopped for a little while to have a snowball fight. A snowball fight in Ecuador on an active volcano? Madness. Cotopaxi has probably been one of my favorite adventures so far. 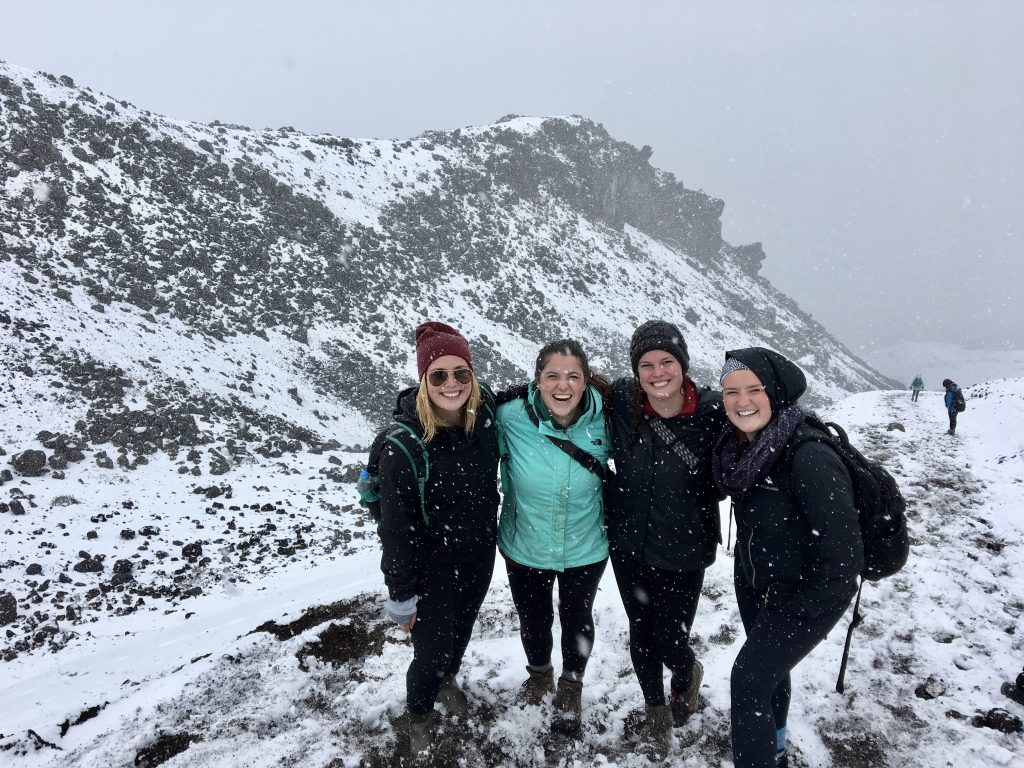 On Saturday we had a field trip to two cathedrals in the historical center. First we went to La Basílica del Voto Nacional. We had visited this church during orientation, but this time we got to climb to the top of the cathedral. We climbed up ladders to get to the top of the towers, which provided incredible views of the whole city. On top of that, the weather was perfect. No rain (a miracle in Quito), the sky was so blue, and the sun was shining. After that, we went to La Compañía de Jesús, a cathedral that is covered in gold on the inside. Overall, it was great morning doing some sightseeing in Quito. 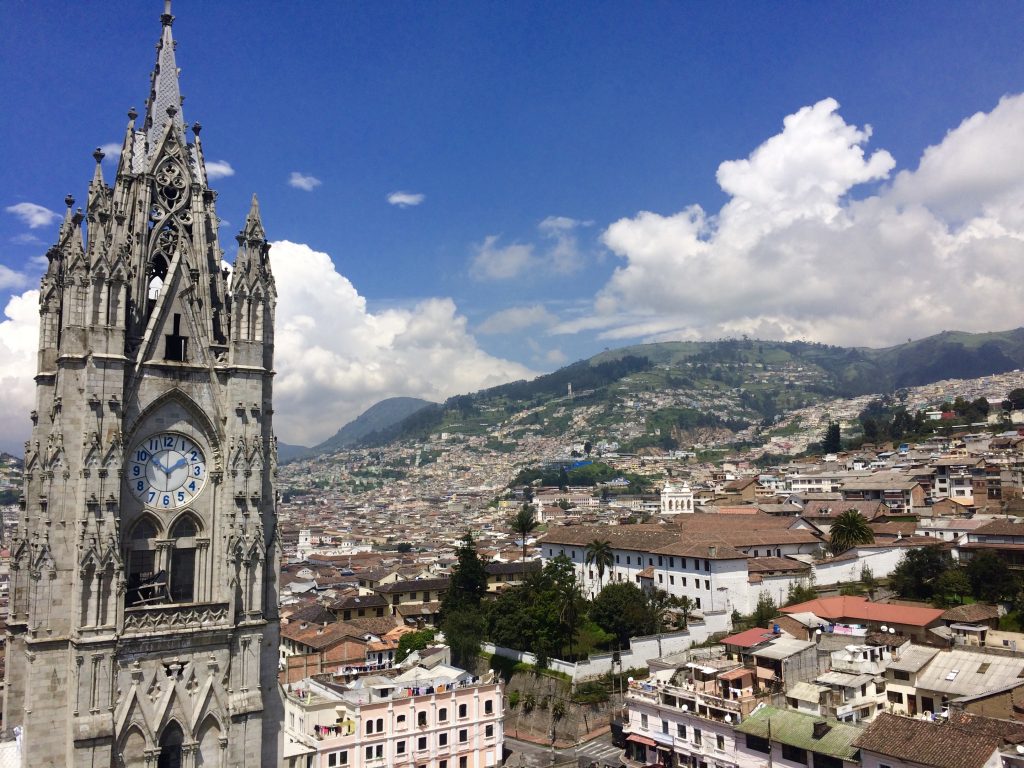 In the afternoon, my friend Adrien invited us over to his host family’s “quinta”, there second home out in the country. It was more like an estate owned by the whole extended family, including houses, a soccer field, a playground, and they even own a few horses there. We barbecued for lunch and dinner which was another thing that felt like home. We ate a ton of meat, listened to music, talked about life, and forgot for a few hours that we were in Ecuador. Life felt very normal and familiar there. The barbecue was just what I needed at this point in the semester. It was a day to slow down and to just enjoy the company of good friends. It also didn’t hurt that we were eating food other than chicken and rice.

Sunday was dedicated to homework and was nothing too exciting, but I needed to use that day to prepare for the rest of the week. On Tuesday I actually went to an Ecuadorian soccer game. We bought tickets for this game months ago and were told it was going to be crazy because it was Ecuador vs. Colombia (they aren’t the biggest fans of each other…). Oh, and it was also a qualifier game for the World Cup in Russia 2018. It was crazy indeed. We ended up having seats that were surrounded by Colombians for the most part. Everyone was cheering the whole game and energy was definitely high. Unfortunately, Ecuador lost… but it was still a very cool cultural experience!

P.S. While we were trying to find our way into the stadium, a news station interviewed my friends and I! It was hilarious…So now Ecuador knows my name, that I’m from the U.S., and that I definitely thought that Ecuador was going to win (sigh). 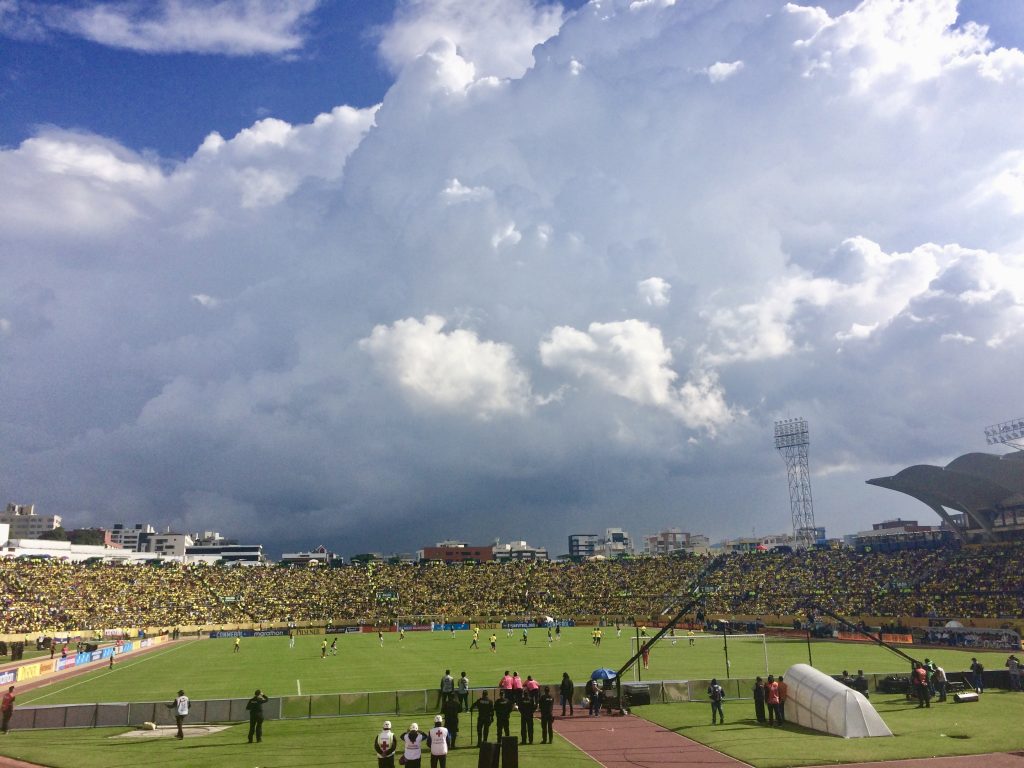 So now I have to crack down on my homework because this weekend I’m heading to the coast! I’ll be visiting a beach town called Puerto Lopez and I’m very ready for a weekend of relaxation. Chau for now!