On occasion we have a long weekend in which we don’t have classes on Monday. Naturally this means we have time to travel around Spain. For our first long weekend I w 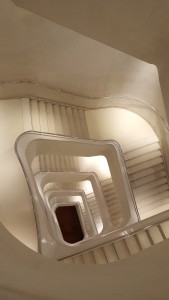 ent to Madrid, capital of Spain. Madrid is like the New York City of Spain, but prettier and less structured. With the largest city population in Spain of over 3 million it is definitely a monstrosity, but the beauty of winding streets and big plazas make it feel less oppressive and daunting.  While there I got to indulge my artsy, high society side. My friend, Ari, and I went to a total of three art museums and my were they magnificent. The first museum is called the CaixaForum which hosts a small but interesting array of contemporary art. The building itself is unconventional. Switzerland’s Herzog and De Meuron are the architects of the unique space. Here is a picture of the stairwell inside.

Just outside the building is a wall named the vertical garden. French botanist Patrick Blanc 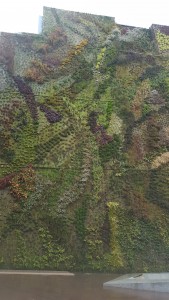 constructed the garden with 15,000 plants of 250 different species! It was really gorgeous, even in the rain.

Another museum we went to was the Reina Sofia. The building itself was also very impressive! It is a multi-level museum with a central garden courtyard; at its face there are
two large glass elevators. The view is dauntingly beautiful. The Reina Sofia has several temporary exhibitions as well as some famous Vanguard art. We saw Dali’s handiwork as well as many Picassos, including the incredibly famous Guernica. It was truly a site to behold.

The third museum we visited was, of course, El Prado. Paintings from masters like Goya, Velazquez, and El Greco decorate this enormous museum. Ari and I spent 7 hours admiring all that we could; we are pretty confident that we did indeed go in every room and see (although sometimes only at a glance) every painting in the museum! The temporary exhibit at the time was by Ingres, a famous Frenc 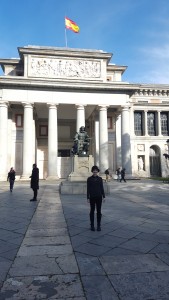 h neoclassical painter. I enjoyed how much he played with light in his paintings. Candles were a common theme, casting distinct and unique shadows on his subjects. El Prado was a breathtaking experience that I might have to have again before I leave Spain.

In addition to museum perusing, Ari and I explored the city. The plazas are huge and beautiful. We found the Palace of the Spanish royal family, saw 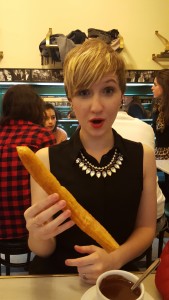 numerous interesting stores─such as a used bookstore where we bought Spanish poetry─and discovered the best Churros place ever. San Gines is a 24/7 Chocolatería celebrating its 100th year. The chocolate is indeed to die for and their churros are gigantic. We have no shame in saying that we went every day for the three days we stayed in Madrid. I was very excited, as this picture makes obvious. Just look at it!

We also spent several hours wandering the streets during El Rastro, the largest outdoor flea market in Spain. Here you can buy anything from scarves to knives, shoes to doorknobs, and everything else in between. Afterwards we went to the food market where I had some delicious paella. Ari got gulas on toast, a food we have come to love. Gulas is the name for a special way of preparing a fish. The fish is sliced very thinly so that it looks like thick, short pasta. This with garlic and olive oil is delectable. We had another great food moment when we found a bar called Las Cuevas, or The Caves. The name is accurate. To enter the bar we went down very steep and narrow stairs. The ceilings were curved and low, there was a live pianist playing to his heart’s content, and posters of famous paintings decorated the walls and curved arches that connected the ceilings and floors. It was “guay” as the Spaniards say (“cool”). Here’s a sound byte of what a Spanish bar typically sounds like, with the addition of a pianist!

To top off our highly cultured and artsy weekend we saw a ballet! As the sister of a dancer, I had heard about Swan Lake, and now I can say that I have seen it performed in Madrid. The costumes were gorgeous, the dancers were lovely, and the whole evening was unforgettable. While I would not want to live in Madrid, visiting for a weekend kept me busy and overwhelmed with awe and joy. For any lovers of the arts, I recommend Madrid for a day or two. 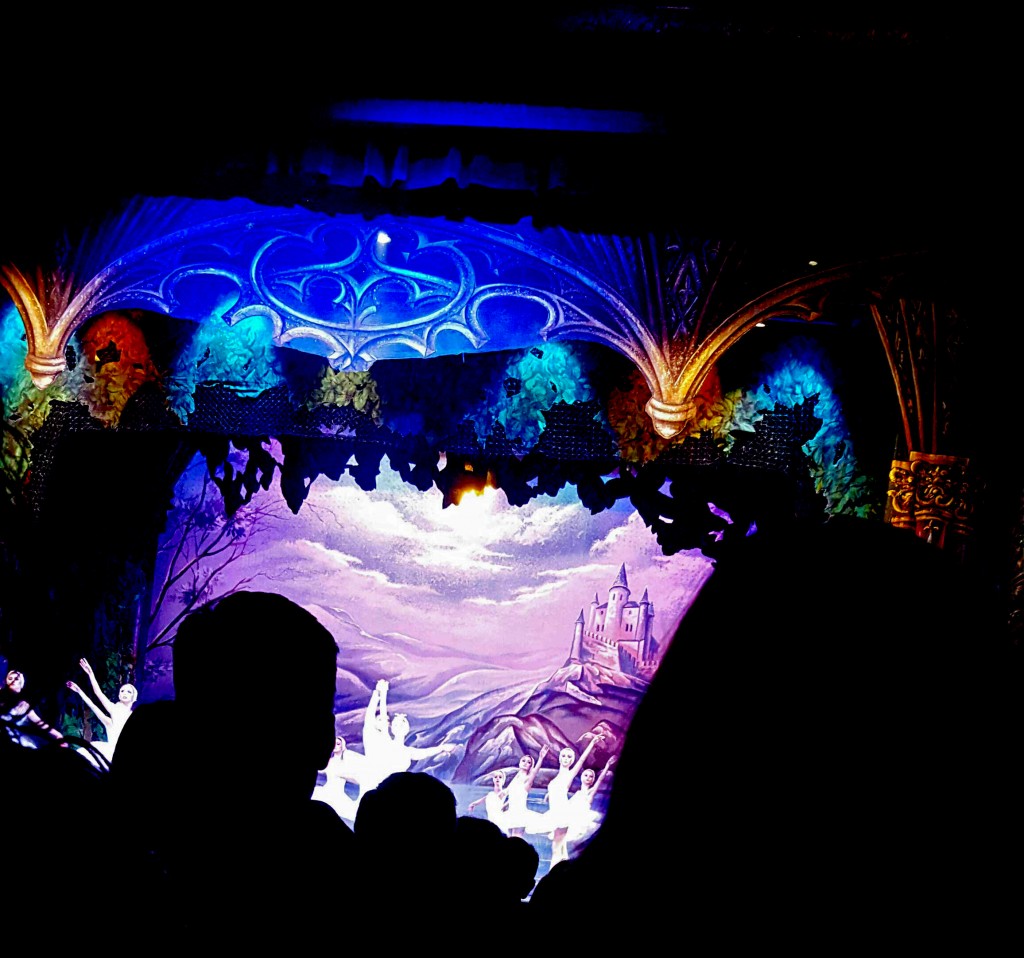 For this week’s microbio, meet my intercambio, Ana! (An intercambio is a Spanish student who gets paired with an American student to practice their respective second languages and make new connections.) Ana is from Cadiz, the beach city that hosts Carnival. She is a freshman at the University of Granada studying English and Spanish literature. She enjoys reading and painting in her spare time, but don’t mistake her for shy; she frequently dresses in costume with her friends at fun parties and clubs in the local area. She speaks English quite well and is sweet b 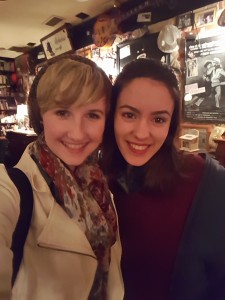 ut strong. We have had some great conversations about music, the importance of travel, leaving your home bubble, and family. “Leaving your town is so important because you get to grow. I feel like all my friends who haven’t gone anywhere are the same. I don’t want to be the same as I was in high school!” There is a lot of value in staying near home, especially for family, but I think we can all agree that at least visiting other places leads to so much growth. (And yes, she said that in English!) For our most recent get together we went to this really cool cafe/bar called Bohemia Jazz Cafe. The walls inside are coated with funky paintings, pictures, obscure items, books and whatever else; there is also live jazz piano music on certain days. The cafe is known for their drinks, desserts, and combinations of the two. I had a scrumptious ice-cream sundae. We had a great time and will continue to meet up throughout the semester.