Hello from the Windy City!

It’s almost a week in the city, and I am already absolutely in love with all of the experiences that the Chicago has to offer.  Most of last weekend was filled with orientation sessions that help us understand how to live in the city, but we’ve already begun to explore the culture of the neighborhood. After my family and best friend helped me move in, we grabbed lunch at a restaurant, called Wow Bao. 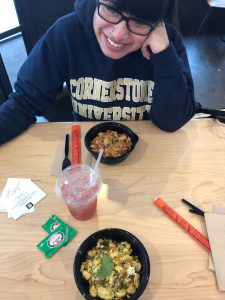 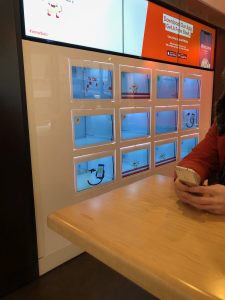 None of us ordered bao, which are steamed buns filled with pork (usually), but the rice bowls that we did order were so tasty! Instead of the traditional counter and register to buy food, customers order on a computer and the food appears in the pods with your name. It was a “Welcome to the future” for us if anything and a great first meal in the city. 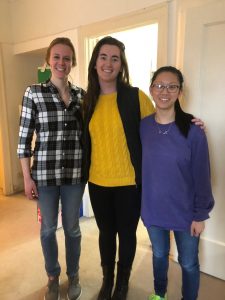 Saturday and Sunday were filled mostly with unpacking and making the apartment homey, especially since we’re living here for the next three and a half months. Chicago Semester is very committed to ensure that its students are well-acquainted with how life in the city works; this includes learning about public transportation, safety in the city, networking, shopping, and community involvement. The program provided several session in which we learned about these various topics. Another important value of the program is that the students embrace the vast cultural diversity that is found throughout Chicago and its over 200 neighborhoods. The city is widely-known as a place where immigrants can find a fresh start. To get a taste of the culture, all the students went to a different part of the city for deserts for the first night of orientation. I went to the neighborhood of Pilsen to Panadaria Nuevo León. The patisserie was brimmed with various deserts whose names I had absolutely no clue but were falling apart in delicious goodness. We even got the baker (after all of us urging her to) to take a picture with us! 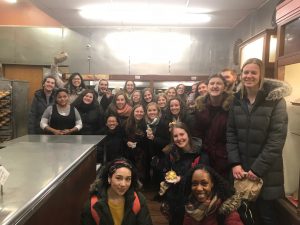 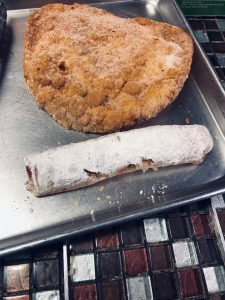 The following day, several different groups visited different parts of the city for lunch and a short introduction to the people that lived there. I visited Little India (which is almost all the way north edge of the city), where we had the most delicious food. 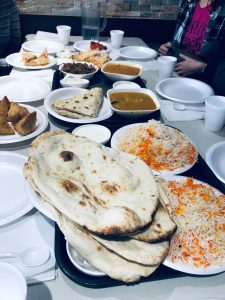 Would you believe all this food (for 8 people) cost less than $50?!

I had had Indian food before, but this was the most to-die-for that I’ve ever had. Needless to say, it was worth the hour commute from our apartment complex. 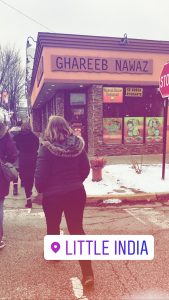 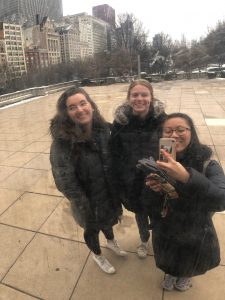 After learning about the various neighborhoods, my roommates and I began mapping our semester bucket list. Our first adventure was to Millennium Park and Greek Town. Following the sage advice of the Chicago Semester faculty, we carefully mapped our route. Even though I’d been to Chicago multiple times, my family and I had only visited Chinatown together, because of my Chinese heritage. So, I resigned to do the most tourist-y thing: visit the Bean. The only thing I learned from the experience? The Bean is super dirty.

Greek Town is about a 20-minute walk from our apartment in the Gold Coast neighborhood, and it is full of restaurants (because Greek food is the amazing). Molly, Shannon, and I got sandwiches and cannolis that were so tasty! 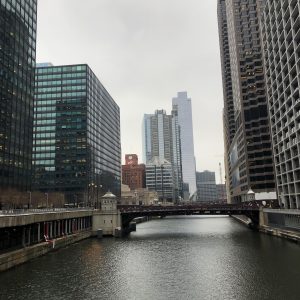 Thursday was the first day of internship for most of the students. Fortunately, Shannon and I don’t start until next week, and Molly’s first day started late. So, we accompanied her to Andersonville, where she works at their chamber of commerce. We explored the Swedish neighborhood until she had to leave for work. For all the neighborhoods I’ve visited so far, it’s been fairly easy to see what the people value and the center(s) of their culture.

Less than a week in, and I’ve only scratched a piece of the entire surface of the city, but I’m well on my way. Even though I’ve already gotten myself lost twice, I’m becoming more comfortable with riding public transit and routing my destinations better. My first day of internship is on Monday, and I anticipate nestling into a routine of a set schedule mixed with bouts spontaneity. 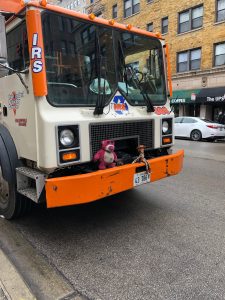 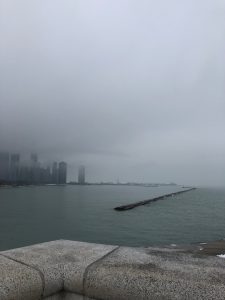