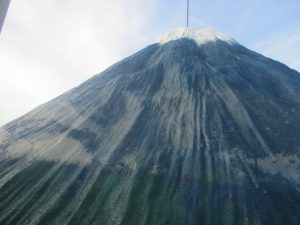 ….Well, a model version of Mt. Fuji. On a high rise observatory machine. But still cool! 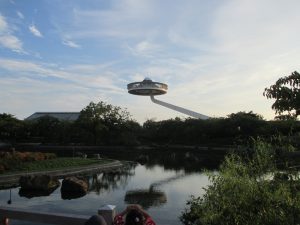 I’ll back up a little bit for you: I actually recently came back from a trip to Nagoya! Nagoya is a city located in Aichi Prefecture, which is southwest of Tokyo. It’s very far and very much in the countryside, so the best way to get there is by Shinkansen, which is the rapid bullet train. By Shinkansen, it takes about 2 hours. 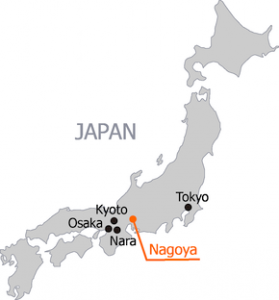 I was so fortunate to have a family to stay with while I was in Nagoya. (Actually, it was the family of my very first Japanese friend, with whom I met back in high school! What a blessing!!!) To get anywhere, you need to have a car and drive for at least 30 minutes in any direction. But, even though the commute was long, I was entertained with the beautiful scenery, accompanied by lots of information about the area from my friend’s parents and grandmother. 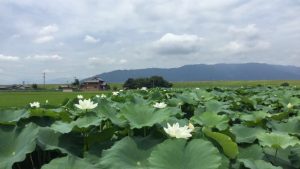 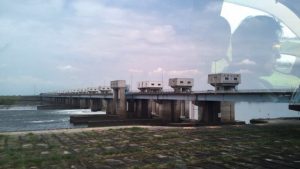 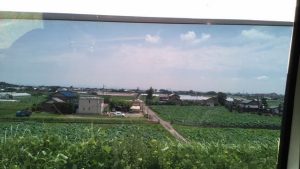 It was a bit intimidating at first, because my friend’s family spoke in Nagoya dialect, which is slightly different from normal Tokyo dialect. My friend’s grandmother was the most difficult to understand, because her hurried and somewhat slurred speech made me have to force out a nervous “I have no idea what you just said” laugh once in a while. But thankfully, I was able to understand at the very least 50-60% at all times! That was a nice confidence boost! I was also really happy to hear that my friend’s grandmother was relieved she could communicate well with me.

We went to SO many places during my stay: castles, parks, and even a festival! (the park was where I rode the Mt. Fuji observatory ride)

I took so many pictures, but still felt like the scenery was just too much for me to be able to capture it all. It was almost overstimulating. 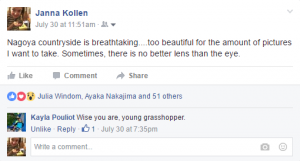 I told my friend’s family that I was so happy to see so many mountains, as I had never been so close to them before (growing up in west Michigan means seeing only trees, fields, hills, and sand dunes). To my surprise, on my last day in Nagoya, my friend’s family took me to the Ibukiyama Driveway, which is literally a driving path that goes to the top of Ibuki Mountain! What a wonderful view that was…Talk about overstimulation.

No worries, though, guys. I managed to get some good shots on my camera. 😉

I have seen many beautiful places in my lifetime, but Nagoya is by far the most beautiful place I have ever seen. It was the perfect escape after living in the city of Tokyo for the past few months. I am so incredibly grateful!

2 main things to take away from this: