Pardon my long absence. The CYA has its midterms, its Thanksgiving Break, and its finals all rolled into the same 30 days, so it’s been a whirlwind keeping it all under control. As you may know, I am no longer in happy Athenai, but am posted currently in Istanbul.  But that’s for when I get back to Holland and have time to sort out my journal of thoughts, emotions, and tuppence wisecracks.

So instead I shall speak of my happy fall break days in Bella Italia: Rome, Impromptu Assisi, and Florence. The moment my paper on the Athenian Agora was in the envelope on the third floor I had taken the first Ryanair jet with Michael and Shannon, some excellent travel folk.  Seriously, Blue and Yellow is a dizzying color scheme, and if the ticket prices weren’t hovering around $40 each way, I’d be complaining. All the same, we landed mostly unscathed in Roma, where we proceeded to visit the Vatican, the Colosseum, and to eat too much. I was traveling with one good Catholic, and one other dirty Protestant (like me!), all studying the classics. We passed the train ride into town matching our classmates with deities of the Olympian pantheon, like good nerds.

Rome was a dream -five days of endless museums and monuments. I fear that I simply didn’t know enough Roman history to comprehend all that I saw (I specialize in Greek and Eastern Roman history -that is, Byzantium). But I did get see the famous head of Constantine in the Capitoline Museum. 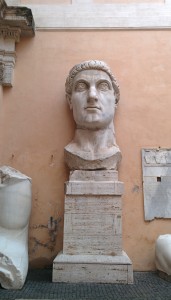 And posed in front of the School of Athens with a friend in the Vatican.  (Photo missing, alas. Picture Josh and his Catholic friend gesturing like Aristotle and Plato. It just so happened I had two books in my satchel to complete the look.) 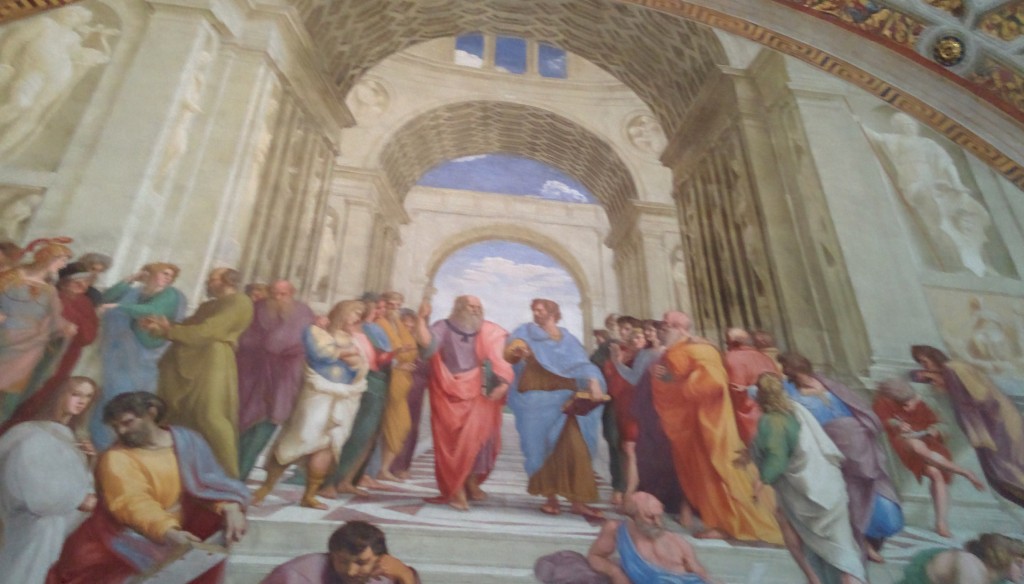 Also, a thoroughly enchanting view of Judith and a decapitated Holofernes in the Barberini Museum. 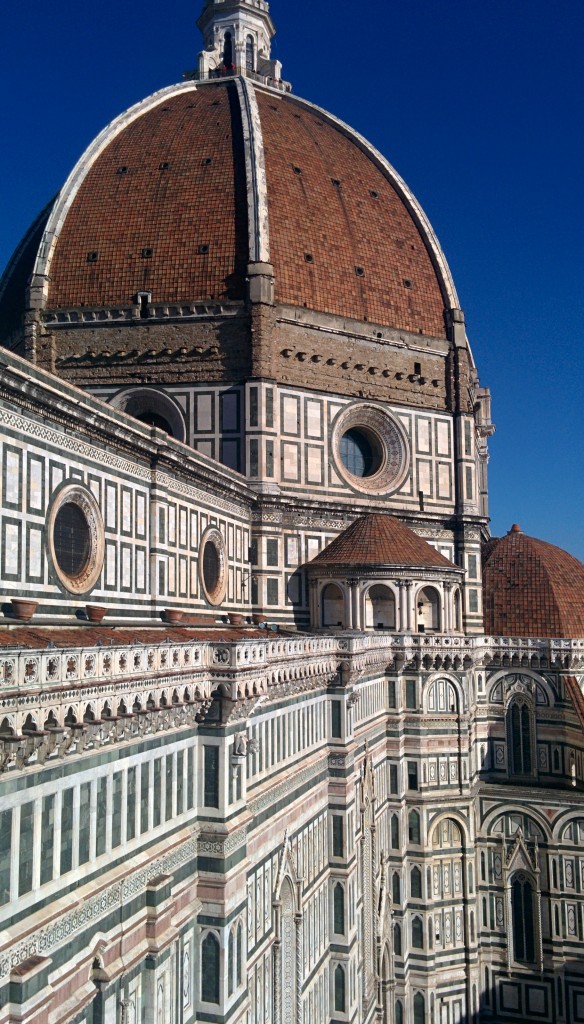 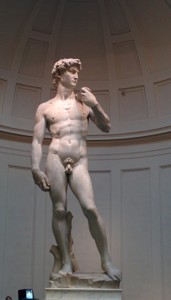 Next stop, Florence. At the Roman train station, I bid farewell to my pilgrim companions and set out for the fair city of the Medici, expecting to spend the rest of my trip solo.  It would be a brief, two day stint, I assured myself.  Day one passed quite well, I daresay, what with a good taste of the Duomo, tripe sandwich, the Statue of David, and an unexpectedly good collection of Mesoamerican Art in an archaeological museum I found in the late evening.

‘Twas a strange place, that.  Discovered it two hours before the museums closed – I was exhausted and simply too far from the Uffizi to bother going. And then I found myself in the creepiest, worst-lit, and non-ICOM museum I’ve ever visited.  After the soaring heights of the Academia and Cathedral, this empty museum full of Incan, Olmec, Zapotec, Etruscan, and Egyptian finery was rather…discombobulating. 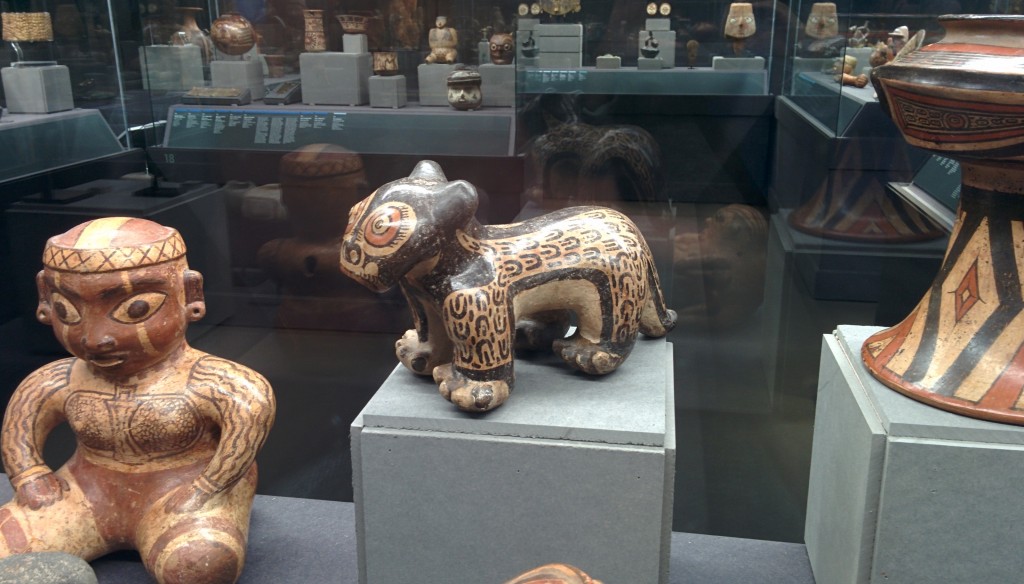 I suppose the absence of visitors must have compelled them to save electricity, so only a handful of spotlights splattered the bare walls.  75% of the text was in Italian, including a looping documentary of an Italian archaeologist who had dug half the goods up: complete with Third-World Children selfies.  Huge, long passages and corridors brought you past stairwells with glaring “NO ENTRY” signs, and vending machines that had probably not been restocked in a while. Every so often a tremor of a curator’s Italian would reverberate down that hall, but otherwise nothing.  But nothing prepared me for the excellent collection of Etruscan sarcophagi waiting in the penultimate exhibit.  You must imagine great alabaster coffins with human statues reclining on the lids, staring at the viewer -all staring at anyone who dares stand in the center of the empty room.  It was utterly terrifying.

2 A.M., I wake up to the sound of my Dutch hostel-mate snogging.  Very loudly.  I check my phone and lo and behold – my friend’s mother back in New York has sent my a rather desperate message. Yes, Martin is missing.  No texts, no calls, no emails for the past 24 hours.  Yes, he was headed to Assisi.  No, I haven’t heard anything either.  Do you want me to take a look…? If you’re sure it’s really necessary…

The next thing I know, I find myself bound for the next train to Assisi, hunting for a friend in the wilds of Tuscany and Umbria. I meet an old woman who asked if I was Catholic. I got off at a wrong station and was given wrong directions by a man who desperately wanted a lighter for a smoke.  I also spent two hours knocking on the doors of monasteries, duck-talking with two police stations to file a missing persons report in a mix of English, Greek, Spanish, and Italian. Pseudo-Polyglot level up.  The good officer spoke no Anglo-Saexe.

I shake my head. I can only explain that an amigo of mine is missing.  He seems to nod.

“Μιλατε Ελληνικα?” I ask at last , without much hope. (Do you, sir, speak Greek?)

“EH?!” bellows the guard, followed by a mutter that sounded rather like a: “Que cazzo?”

The conversation, you can imagine, went swimmingly. I finally found an officer who spoke enough English to file the report. Blessed be the bilinguals. 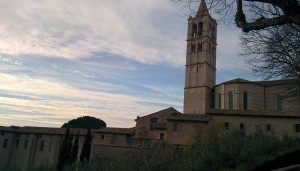 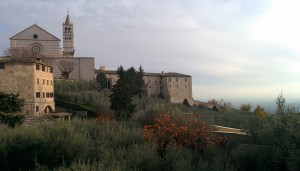 Assisi, as you might recall, was the famed town of St. Francis, a holy man known for renouncing business, starting an order of monks, and tweeting with birds, as loners are wont to do.  Well, he only talked about loving animals once, but that doesn’t stop wishful neophytes from inundating his iconography with critters of fur and feather. In short, he was a very devout man from a very devout town now full of monasteries, splendid views, and St. Francis bobble-heads.  Kyrie Eleison. You can thus imagine the incongruity of a bewildered and exhausted Josh muttering mild imprecations as he hunts for his MIA friend in this wonderful little Italian town with godawful lasagna, for about four hours.

It’s only when I’m about to leave, with no sign of my friend, and very little wi-fi, that I receive the news that my friend had finally found wi-fi and contacted his dear, distraught parents. On the other side of Assisi.  Of course, by then my time is up and I needed to get to the train, exhausted, but vaguely relieved. At least he’s not dead or something.  But how anticlimactic!  I return to Florence, glad to have seen one more city than I’d intended otherwise.  The flight to Germany comes next!