Today I let myself cry about the gender inequality I see in our world. I felt a little silly sitting on a park bench with the tears streaming down my face, but I think this issue is something that needs to be recognized and deserves to be cried about.

My tears were spurred by an encounter I had with two older men as I was leaving my literature class. Just outside the university, one yelled at me, “Hola linda! You speak English? What is your name?” I ignored him and kept walking. However, that catcall seemed to give permission to the man beside me to start talking to me, also asking where I was from and telling me about his business. Despite my refusal to respond or even make eye contact, he kept pestering me until we reached a corner. There, I turned to avoid him and take a different route.

But why should I have to change my walk home from school? I should be able to feel safe on the streets. I was fuming and frustrated that those men had the power to make me feel so vulnerable and targeted.

The other problem with that encounter is that it wasn’t just a one-time, isolated thing. Catcalls happen to me almost daily here, and my foreign friends have experienced the same thing. In fact, I was coming from my literatura latinoamericana class, where we had just finished sharing our experiences of gender roles. To close the unit on feminist literature, my profesora asked us all to write down moments where we saw gender roles play out. The sad thing was, every person in the class had those experiences. We talked about guys acting aggressively in bars, male coworkers getting paid more than female counterparts, “mansplaining,” family members giving stereotypical gender-based gifts, and of course, the plethora of catcalling.

In Spanish, the things people yell are considered piropos, and the phenomena is generally called acoso callejero (street harassment). El machismo is how they describe this gender-unequal society, where men are over-masculinized and women are relegated to the home. They also have a word for crimes against women, los femicidios, where women are actually targeted for their gender.

While I’m frustrated that these are things that happen here, I’m glad there are words that describe this experience. I feel like in Chile, it’s something I can talk about and process freely. The other day I had a really good conversation about catcalling and gender roles with a male Chilean friend. He was so sympathetic and the first thing he wanted to do was tell his other guy friends about the things I’d experienced. That made me really happy because it’s something people are realizing needs to change.

Here, the conversation about feminism is happening. Perhaps because gender inequality is more evident. However, when it’s subtle, that doesn’t mean it doesn’t exist. Back home, women experience the same things, though often it’s disguised as something that’s normal.

Emma Watson said, “we think that we live in a post-feminist society, where we don’t need feminism anymore, but actually that’s really disconcerting.” There are a lot of things that happen to women that they blame on themselves because they don’t see the bigger narrative. We need feminism; we need to talk about the things that women experience that should not be normal.

That’s why I’m sharing my story. It’s frustrating that this encounter happened to me. I don’t think it should be normal, and I don’t think it’s right that all the time women feel targeted or unsafe like I did today. Hopefully, together we can create a society that affirms the dignity of all its members. The first step, though, is joining the conversation. 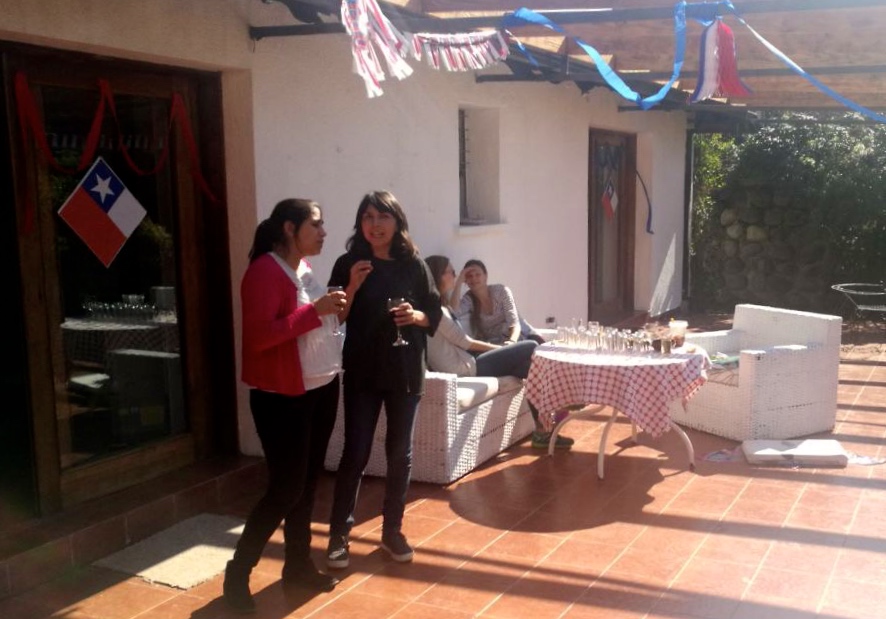 Here’s a photo of two women that I consider to be some of the most powerful Chilean women ever. On the right is our pastora, Oriana, who has had to face a lot of criticism being a female leader in the church. My host mom Rocío is on the left, and she is working on her doctorate in environmental law. I wrote an interview question for her the other day: “what is it like being mujer and abogada (lawyer)?” and it occurred to me that this would never be asked of a man, since they are assumed to dominate this career path and don’t have the same occupational challenges related to gender.