It’s the first week of classes at CIREFE!

Finally, every last bit of orientation is over and we get to start attending real classes! The last three weeks were absolutely exhausting because every day was different. Sometimes we attended classes at a place called Langue et Communications, which specialized in teaching French to foreigners.  Other times we would go to the CIEE classroom at Rennes II to talk about cultural differences. One afternoon we had a tour of Rennes’ historic district, and one evening we had a wine tasting seminar. Some days we had nothing at all! Even though it was really nice to have this period of time to get used to life in France, I’m glad to be settling down with a real schedule and some idea of what lies ahead!

CIEE is a subset of CIREFE (Centre International Rennais d’Études de Français pour Étrangers) which deals specifically with students from the United States. Most of the things we’ve done in January have been a part of the CIEE program, but now we’re starting to integrate with everyone else! I was a little confused for a while about how everything fit together, so I made a little diagram: 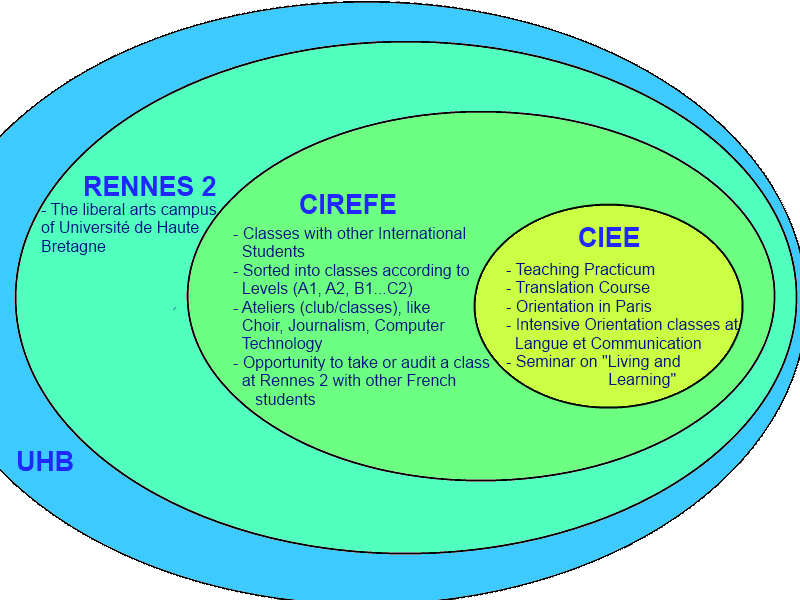 Anyone level B2 and above can take a class at Rennes II, but CIEE specially sets up the translation course for anyone interested. I decided to enroll, and so far, it’s been really interesting! We have one class for English to French and another for French to English (waaaaay easier). Both professors are British, so we’re learning some Anglicisms along with vastly expanding our French vocabulary.

I’m also taking the Teaching Practicum (teaching English as a Foreign Language), and I’m auditing the Seminar on Living and Learning. But neither of those has really gotten underway yet. Hopefully more posts on that to come!