On Saturday evening, my plane took off from the Detroit airport. After a layover in Amsterdam, my dad, my sister Melinda, and I arrived in Cape Town, South Africa without any complications. The flight itself was quite pleasant – we watched an absolutely ridiculous but very funny French movie, listened to some Dutch pop music, and actually managed sleep for about half of one the flights. By far my favourite part of the trip was seeing the sunrise over the English Channel just before landing in Amsterdam. The colours were brilliant and of course from our elevation there was nothing to impede the view. As we neared the airport, the plane circled and descended, turning away from the sun, and once my side of the plane was facing East again, the sunrise had disappeared behind the clouds and the curvature of the earth.  If the plane had not turned, I might have watched the sunrise “unrise”!

Right now I’m in Stellenbosch (about 45min from Cape Town), where my dad and I are staying with one of my mom’s friends from her university days while my sister moves in and get’s registered at the University of Stellenbosch. My mom’s friend’s house is awesome – it’s right on one of the main roads in Stellenbosch, only a few minutes walk from campus, but it makes a stark contrast with everything around it. If the city is the picture of nature tamed and under control, her yard is the picture of nature allowed to run wild. Wild yes, but without taking over.While in the city humans control nature, here nature and humans live side by side without one controlling the other. Vines and trees line the driveway, but leave just enough space for a car of modest size to fit through.  Bushes, ferns, and grapevines surround the house, but leave room for one to see out the window and get in the door. 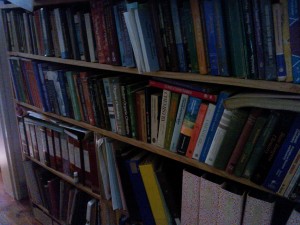 The inside of the house has a similar feel – everything has a place, the place just isn’t necessarily on a shelf or in a cupboard. And I’ve never seen so many chemistry books in one person’s possession in my life!

Nature may be more controlled, but Stellenbosch itself is beautiful too – it’s primarily a university town, and there are a lot of historic buildings in the Cape Dutch style. It is surrounded by mountains (my sister jokes that if you go running you can’t run more than 10 minutes before you find yourself going up!) and flowers, trees, and vegetation abound.  It’s also the winemaking capital of the country, so vineyards cover the rolling hills that lead up to the mountains.

On Thursday morning I’ll be flying to Madagascar, while my dad stays in SA for business and Melinda starts her studies. Until then, I’m running errands, visiting family, loving the sun, and finding that I haven’t completely forgotten how to drive a manual (ie stick shift) car!