Well, it finally came! The day I had been preparing for since early October, Nykerk, was this past Saturday. But it wasn’t just the event itself that was so much fun; the whole weekend was a blast! Not only because of Nykerk, but also because it was family weekend! Moms, dads, siblings, aunts, uncles, and more came from all across the country to visit their family member at Hope. So as you can imagine, the weekend was crazy packed!

On Friday night, I went to a Nykerk odd year event called Family Night. All of the sophomores and senior coaches participating in Nykerk got together to celebrate our accomplishments and be together as an Odd Year family one last time before Nykerk. It gave me an opportunity to see my friends in song and play that I haven’t been seeing very much of. As you can see, I also used the opportunity to take a bunch of pictures! 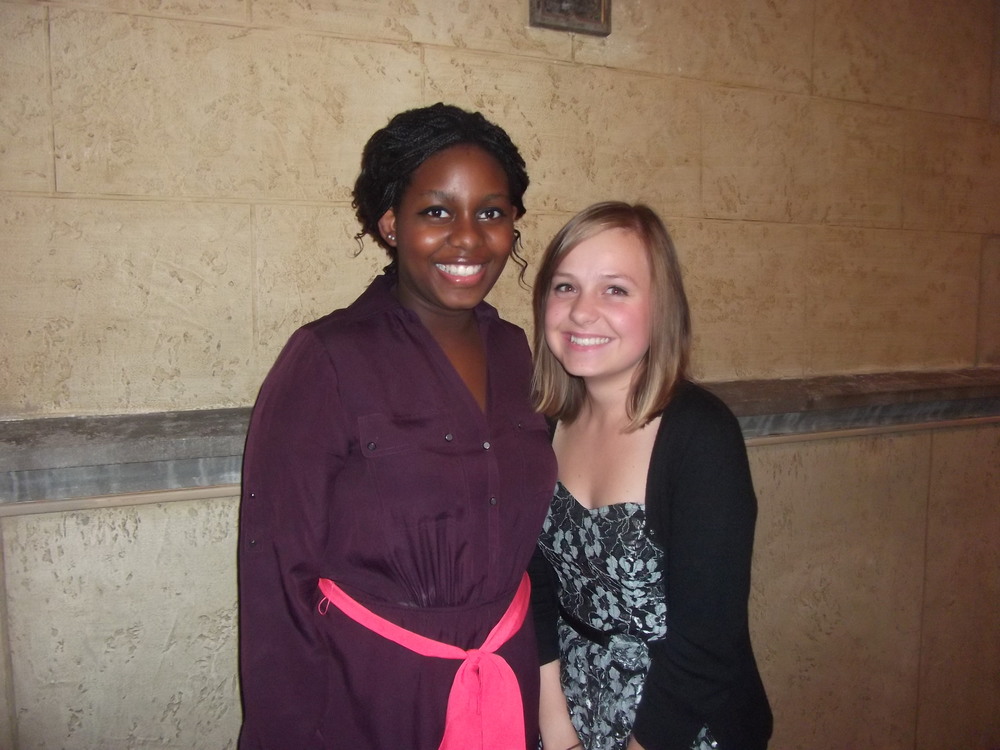 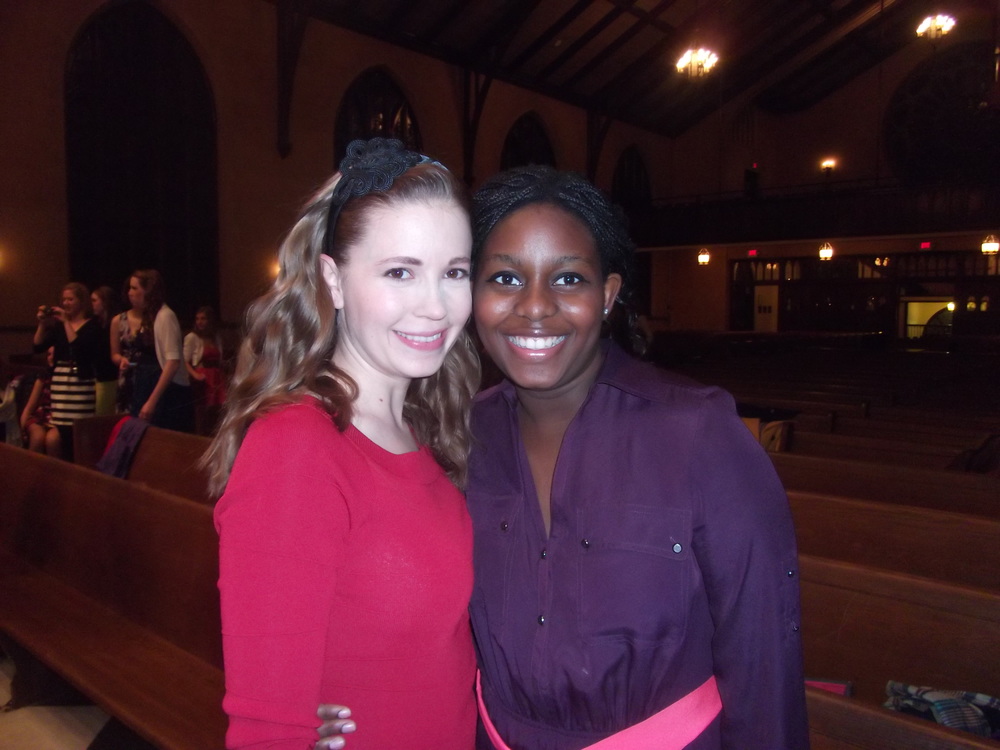 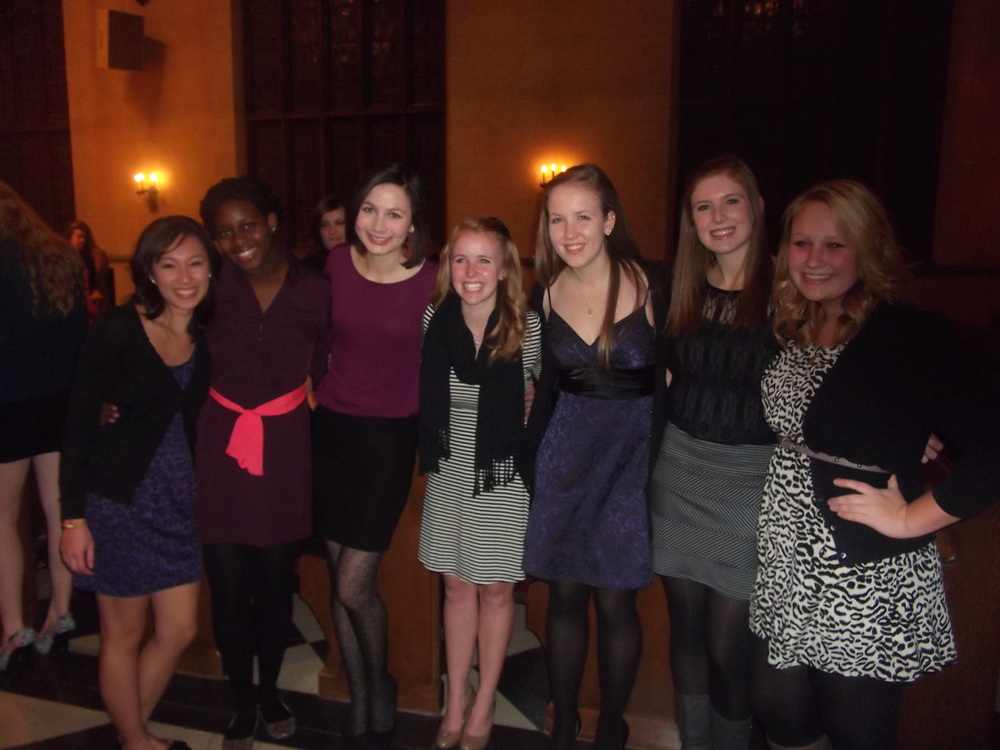 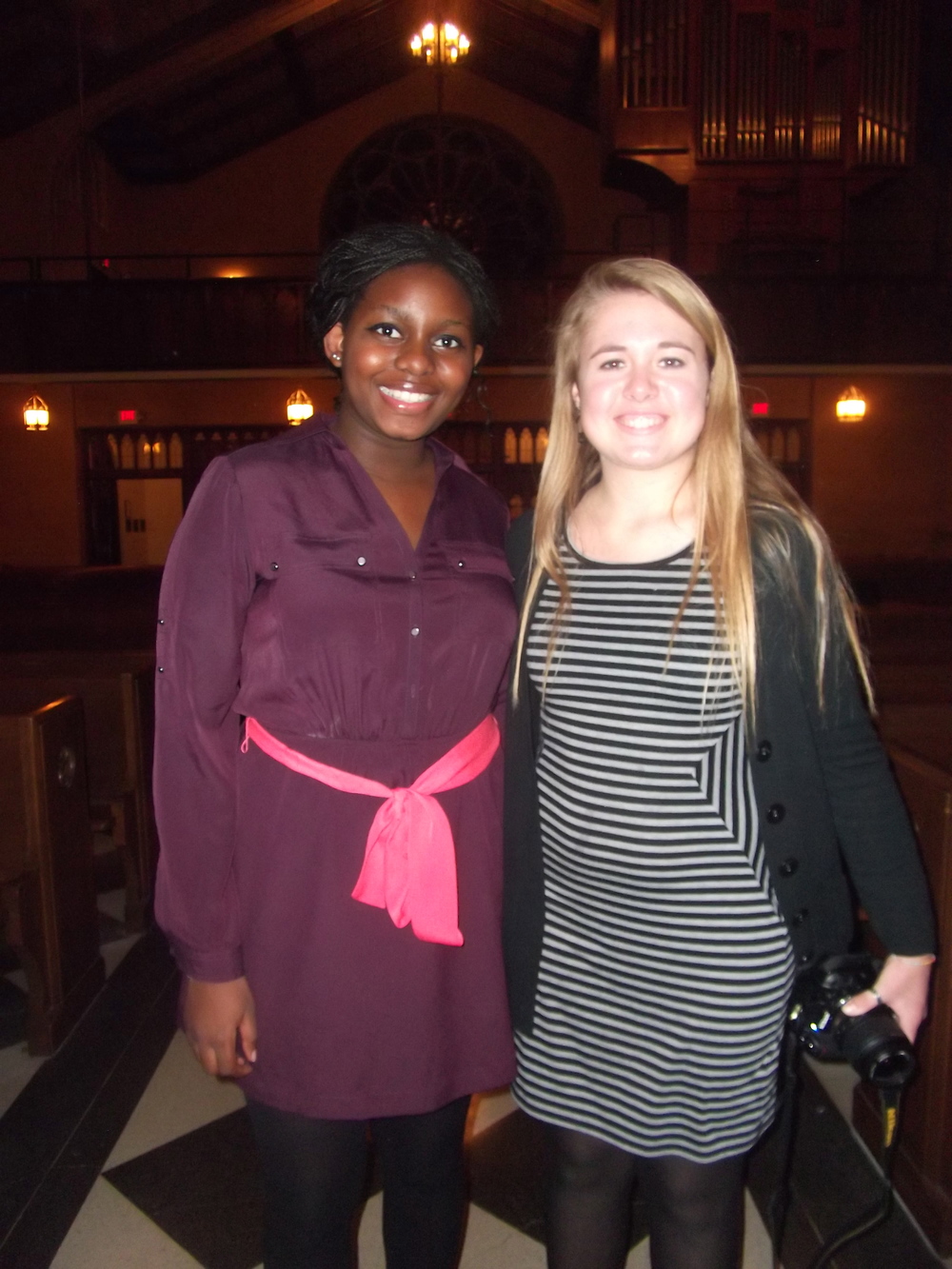 The Song, Play, and Oration coaches each did something fun for the girls they worked with. The Song coaches wrote a song for the Song girls, the Play coaches wrote a haiku poem for each of the Play girls, and my coaches wrote and sang me a song to the tune of “Mamma Mia” by ABBA. Hearing the songs and poems about our time in Nykerk this year was definitely a tear jerker for me. I can’t believe how fast it goes by each year! 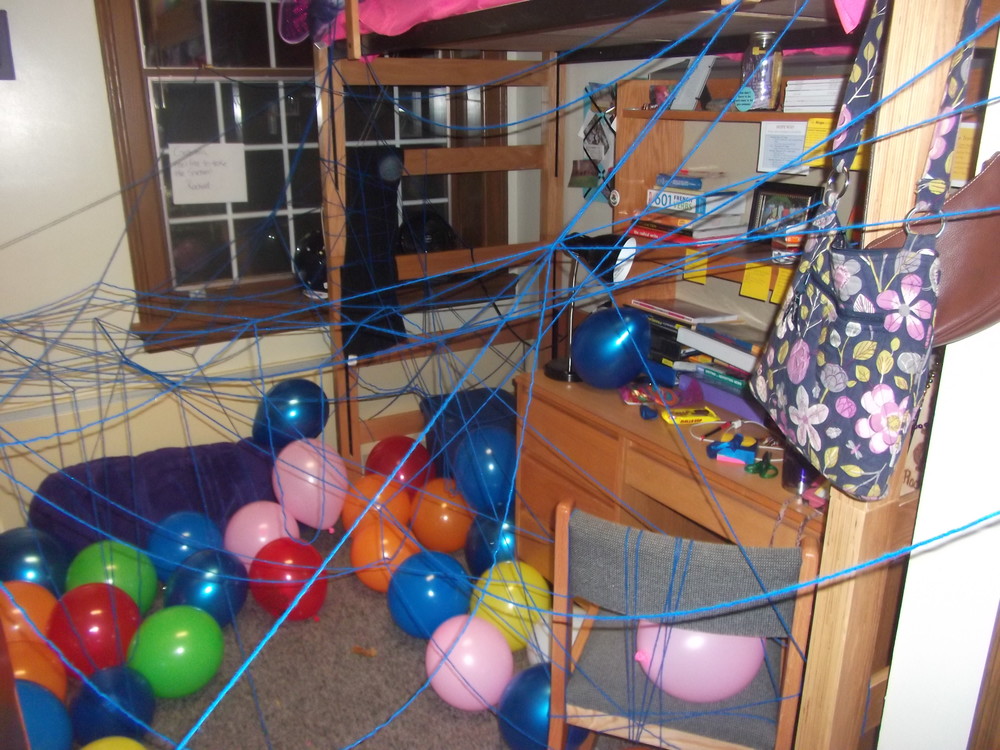 Another big event that happens on Family Night is the reveal of the morale boys. All throughout the Nykerk season, morale boys for Song and Play, or Play boys, had been diligently encouraging us girls with skits each night for Song and Play, as well as posters and candy. My morale boy was Connor, a Play boy, who did a GREAT job of moraling me, as you can see from the picture.

It made me feel like I was in a spy movie, because I had to somehow maneuver my way in between all of that string. Let me tell you, it was not easy! Best of all, they gave me lots of candy. If you look carefully on my desk, you can see a little yellow packet and a purple one right next to it. The yellow one is a packet of Mallow Cups, and the purple one is gummy bears. And inside at least 10 of those balloons is a mini Snickers, which I adore. I still can’t believe they did all of that for me! Thanks a bunch guys!

Back to family night, the Song morale boys and the Play boys each did one final skit. It was so sad to think that after all of the skits they had put on for us, this was the end. Odd year family night was just one big night of sadness, but also lots of smiles at remembering all of the fun we had over the last two years. 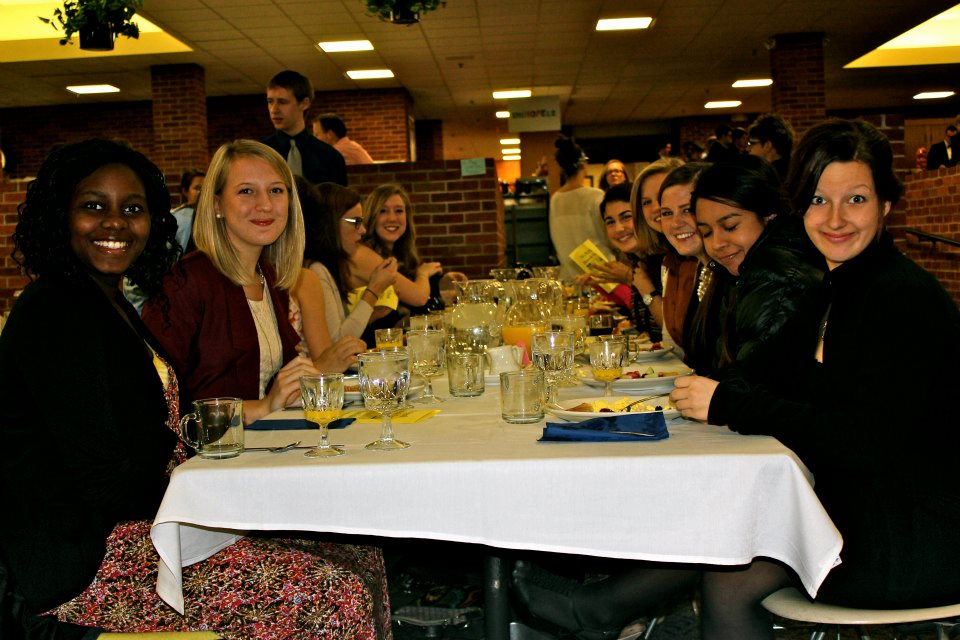 On Saturday, I got up suuuper early to go the the Nykerk breakfast, an annual tradition. It is a time for all of those involved in Nykerk, even and odd year men and women, to come together one last time before the show. This is also a time when the junior coaches for the next freshman class are  announced. I was so happy when Claire and I were officially made the 1-7 Oration coaches! I can’t wait to work with her next year and I can’t wait to find out who our orator will be!

Later that morning, I went to the siblings breakfast, which was on the schedule for Parents Weekend. My family drove all the way from Iowa to see me perform in Nykerk, and I was so happy to have them there! My sister Priscilla and I had a great time watching Cloudy with a Chance of Meatballs and getting to meet Dutch. I think this will become an tradition for us!

That night, I went out to dinner with my family, my coaches and their families. We ate at Butch’s in downtown Holland, which I had never been to previously, and is now one of my favorite restaurants in Holland. It’s during the dinner that I started to get really nervous about the performance. I tried to stay calm and focus on eating my food, but the thought that I would be performing in front of 3,000 people was too nerve-wracking for me. Somehow I managed to keep myself somewhat calm and get through the dinner.

Finally, it was time to go to the Civic Center. I had only a little bit of time to walk around and get my microphone before the show started. At 7 PM, I went backstage to be introduced with my escorts. I chose to have both of my parents escort me because I couldn’t choose just one to be with me. As soon as I got backstage, the nerves hit me in full force. After some lame attempts to breathe deeply and calm myself down, I just accepted that I was going to be nervous and did my best to not let it show. One of the coolest parts of Nykerk was walking out with my parents and hearing all of the applause for us. In that moment, I felt so loved and realized that no matter how I did, I had a strong support system behind me.

I’m going to be totally honest with you: I didn’t pay very much attention to the freshman song. Can you blame me? I was performing right after them! My legs were shaking during the entire song. Luckily, I had a long dress on, and no one could tell. I went over my speech a few times in my head and gave myself a pep talk. I told myself that if there was ever a time to be brave, ever a time to be bold, that time is now. With those thoughts in mind, I got up out of my seat and made my way to the stage. As soon I got up the stairs and went to the middle of the stage, my nerves vanished. Just like that. I took a few deep breaths, waited for the lights to come up, and started my speech. 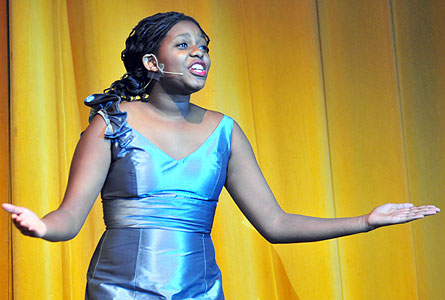 It felt just like the multiple rehearsals I had at the Civic Center earlier that week. I tried to let the speech flow without letting myself get too much in the way, if that makes sense. I knew I had this speech memorized inside and out. All I needed to do was show the audience and judges. All throughout the speech, I told myself that as soon as I made it to the final sentence and hit that last pose, I would be okay.

The feeling after that was indescribable. Having so many people cheering for me was beyond amazing. I floated on cloud 9 back to my seat and started sobbing. The biggest reason was relief; for almost one month I had been working tirelessly to make this speech as good as it could be, and sitting in my seat, I believed I did just that. Another reason was pure happiness. Sometime between the rough drafts and late nights, this speech had worked its way into my heart, and being able to have the opportunity to share this part of my thoughts with an audience was extremely rewarding. After I was all out of tears, I sat back and enjoyed the rest of the show, which was soooo good.

At the end of the show, the winning class was announced and the cup went to the freshmen. I can’t lie; not winning was really sad, because so many of us had invested so much time into Nykerk, and after all, it is a competition. However, I can also say that winning Nykerk isn’t everything. Sure, the cup would have been nice, but it’s the friendships I made, the laughs I shared, and those hilarious morale boy skits I’m going to remember years from now and treasure, not the cup.

So that was my Nykerk experience! I loved every second of this season, and last season when I was a Song girl, and I wouldn’t trade my two years of performing in Nykerk for anything in the world. For anyone out there who is thinking about doing Nykerk, do it. For sure. It gave me some of my best memories, and it might just give you some of your best ones too. Let the countdown to the 79th Nykerk Cup begin!