Last Thursday was a pretty sad day in my life, because one of my favorite shows, 30 Rock, came to a close after a poorly-watched, but critically acclaimed seven-year run.

The brainchild of Tina Fey, 30 Rock followed the adventurous, messy life of Liz Lemon, a thirty-something working as the head writer of the comedy TGS on NBC who wanted nothing more in life than a husband, kids, and a meat lovers pizza. Each day, she was surrounded by a eccentric bunch: Tracy Jordan (played by Tracy Morgan), the man-child star of TGS; Jenna (played by Jane Krakowski), a narcissistic wannabe actress on TGS; Kenneth (played by Jack McBrayer), a naive page from Georgia, and Jack (played by Alec Baldwin), a cunning network executive. Together, they made one of the most dysfunctional, lovable groups on television. 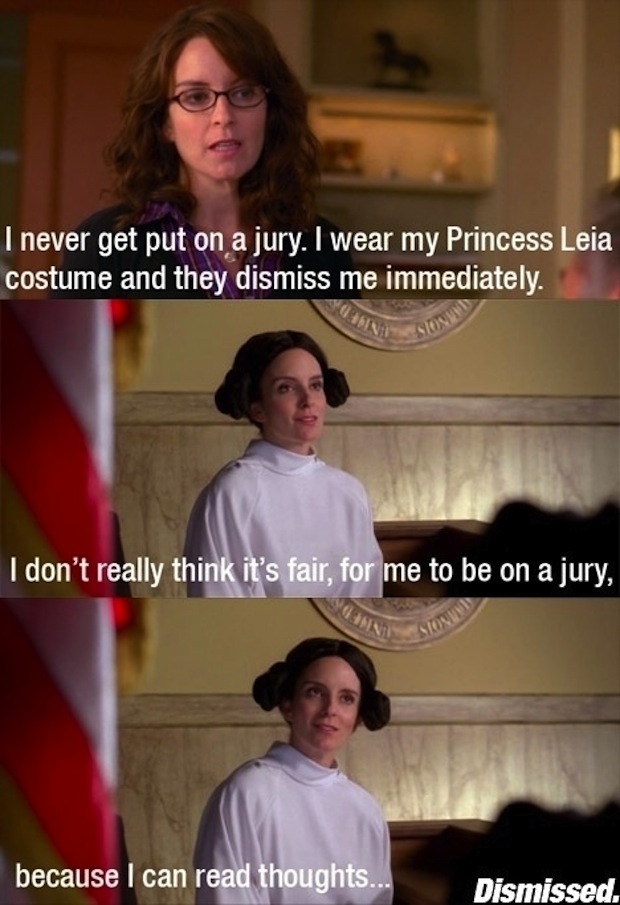 This piece of advice is given so much that I think it is sometimes ignored. But not for Liz Lemon. She took it, ran with it, and lived everyday through it. Despite being in an industry known for superficiality, Liz stayed loyal to herself and was never afraid to let her true colors fly. Granted they flew at the wrong time once in a while, but she had the right idea. Her sayings, like “what the what?” and “I want to go to there” gave her an added dose of uniqueness.  Who else would dress up as Princess Leia to get out of jury duty?

Have a sense of humor

Liz Lemon’s personality attracts unfortunate situations like world’s strongest magnet. She’s had numerous failed relationships, work projects blown up in her face, and enough sadness to last her a lifetime. But does she lock herself up in her room, eat her sorrows, and give up on life? Only occasionally, but the important thing is that it never lasts forever. Liz is somehow able to bounce back from whatever life throws at her and come back stronger than before. After watching countless episodes, I actually believe that her can-do spirit and joyous attitude is so infectious that it can be transferred across the television screen.

Work hard for what you believe in

TGS wasn’t the most loved show, by audiences or executives like Jack. Luckily, it had the strong force that is Liz Lemon to work as its advocate. She put her life on the back burner to work tirelessly for the show she loved so much. TGS didn’t have the longest run, but it did have a lot of heart behind it. Liz dedicated everything she had to the show and worked her hardest to make it the best. As a student desperately searching for my life’s purpose, it gives me great hope to see people like Liz pursuing their life’s passion without any regrets.

If you still doubt Liz’s wisdom, think about some of her famous quotes:

“Thanks, it’s my own recipe. I use cheddar cheese instead of water.”

“Can I share with you my world view? All of humankind has one thing in common: the sandwich. I believe that all anyone really wants in this life is to sit in peace and eat a sandwich.”

Did you watch the show? Absolutely hate it? Have a favorite quote? Let me know here or on twitter!