Fall is a beautiful season. The leaves change color, pumpkins are everywhere, sweatshirts come out, and oh yeah…

Nykerk. The time has come again.

Trying to explain Nykerk in it’s entirety would be a complete disaster for me, so instead I shall direct you to our website. To put it in the simplest of terms, Nykerk is an annual competition between the freshman and sophomore women. There are three categories: song, which involves around 130 women singing a song and doing motions; play, which has 15 per grade and is exactly what is sounds like; and oration, which is one person giving a speech for about seven minutes.

If you have been following my Twitter, then you know that I was chosen to be this year’s orator!!!!!! Words cannot even begin to describe how excited I am to have this amazing opportunity! I auditioned for orator last year, and honestly I am so glad that I didn’t get it. Not only did last year’s orator Claire Tally do a phenomenal job (seriously, she was amazing), but I had a great time doing song. I met so many people that I still talk to today and has a blast singing Eye of the Tiger on Nykerk night. Now every time I hear Eye of the Tiger I can’t help but bust out into some Nykerk moves!

The Nykerk season kicks off with the Nykerk Rally, which was last Wednesday. All of the freshman and sophomore girls gathered in the Knickerbocker Theater, where we were introduced to the coaches and the executive board. They put on crazy skits that had everyone laughing. That really highlighted one of the reasons why I love Nykerk. Even though it is a competition, there is not as much of a rivalry as there is between the freshman and sophomore teams in The Pull. 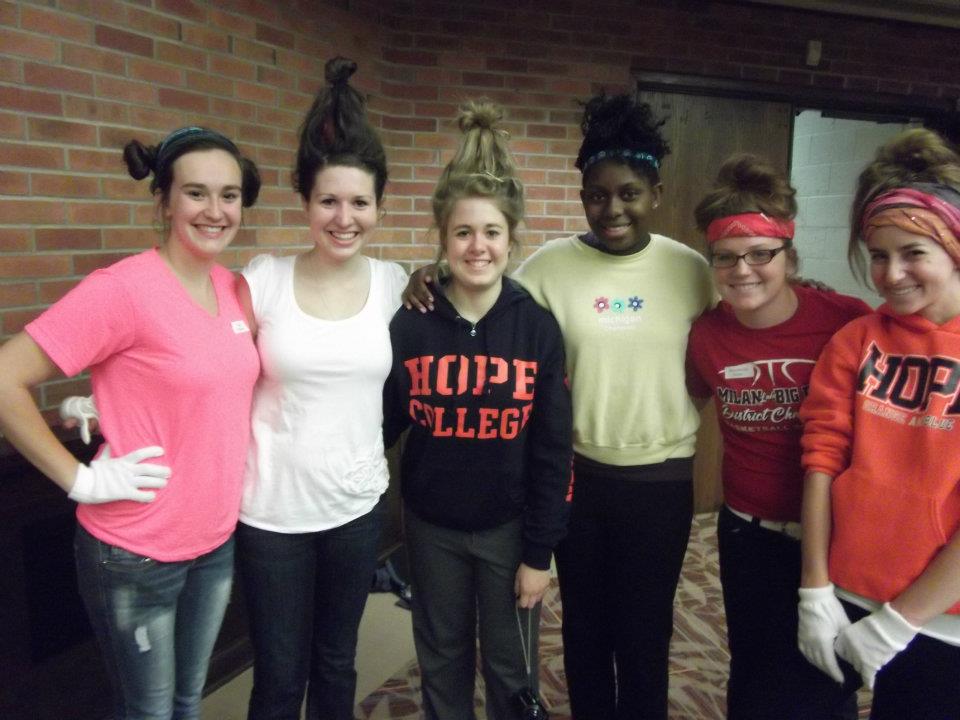 There is nothing like performing on the actual Nykerk day, but the real magic happens during the rehearsals, which start this week. It’s two hours a night of rehearsing, laughing, and bonding with the other girls, or in my case, with the coaches. Some of the practice days are themed, like crazy hair day and pajama day. As you can see from the picture, we like to have a lot of fun with it! One of the best parts about rehearsal is the skits afterwards. As you may or may not know, guys can join in the Nykerk fun too! They can be either morale boys or play boys. Both essentially have the same function: to make us girls laugh after a long day of practice and to make us posters. The skits are hilarious and always put a smile on my face. They come up with new ones every night; impressive huh? And even thought I’m not in play or song this year, I still get morale boys! I can’t wait to see what they will do for me!

Nykerk is coached by upperclassmen; the juniors coach the freshman, and the seniors coach the sophomores. This means that new coaches are picked from the sophomore class each year. One perk about being the orator is that I already know that I will be a Nykerk coach next year with Claire! I can’t wait to work with her and find out who our orator will be. High school senior ladies: start practicing your public speaking!

I will keep you updated on how Nykerk is going for me and will tell you what happens on Nykerk day, which is on November 3 this year. In the meantime, happy Nykerk season!