Well, Nykerk is over as fast as it came. These past three weeks have been nothing but fun, and on Saturday, it was the culmination of a lot of great talent.

As most of you know, Nykerk had a change of venue this year. DeVos is now the new home of the Nykerk tradition, and as expected, there were some huge changes, but also a lot more places to sit! 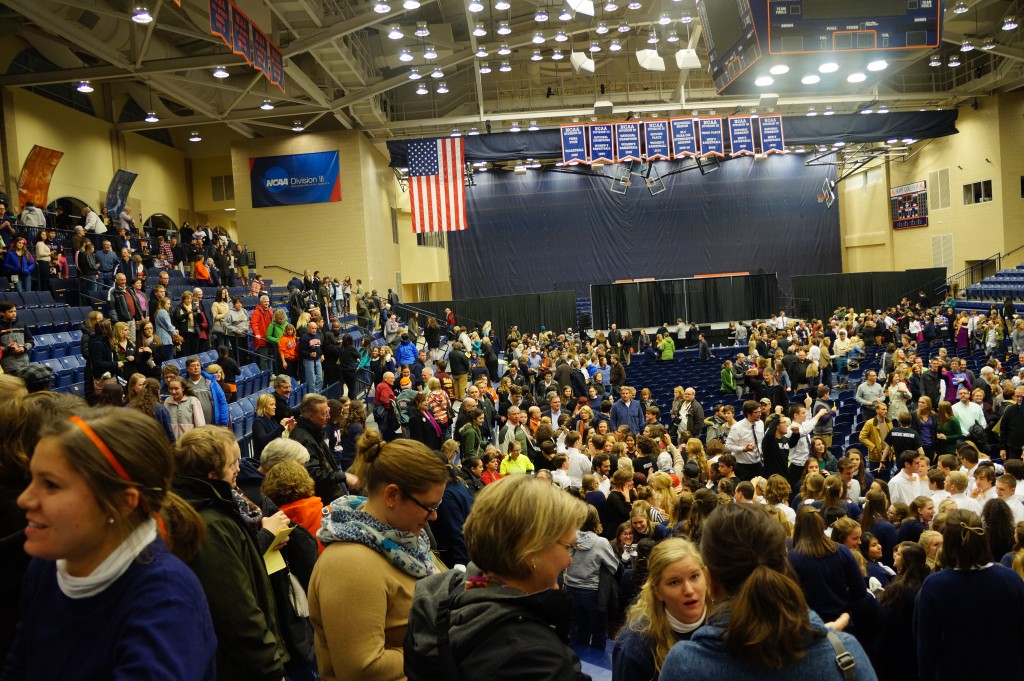 As you can see, instead of the normal set up at the Civic Center where Odd Year song is facing Even year song in the bleachers, DeVos offered a stage that allowed everyone to see every event. Essentially, there were no bad seats in DeVos. The executive board did an awesome job with making the transition from the Civic Center to DeVos seamless and comfortable for everyone.

On to the events!

The first event that was performed was the Freshmen Song. They sang one song: Natasha Bedingfield’s Unwritten. You can watch that here!

They did a great job and got this Hope tradition off to a wonderful start.

Next, was the Sophomore orator. Oration is the art of writing a speech and performing it. It’s hard enough memorizing a speech, but performing it in front of hundreds of people is a whole different feat. Sophomore Maddie Chapman did a great job incorporating the theme of the year, laughter, into her speech and her grace and poise shined through while she was reciting her piece.

After oration was the Freshmen play. This year’s plays were hard to maneuver because there essentially was no backstage, only scene changes. Both freshmen and sophomore play did awesome with that transition. The freshmen play loosely followed the plot of The Wizard of Oz with their own Even Year twist. The floating head of President Knapp as the great and powerful Oz was a nice touch, and overall their play was hilarious!

After intermission was the sophomore song. As per sophomore tradition, the song they performed was a medley. This year the medley was of 80’s songs, and it lasted about nine minutes. It was a great way to showcase the class of 2017’s last year of Nykerk. Check it out!

Next up was the freshmen orator, Cassidy Bernhardt. Cassidy, like Maddie, wrote and spoke about the subject of laughter. Her speech talked about laughter as a garden. Her motions perfectly matched her words, and she conveyed a great story. Even though Cassidy’s speech was later in the program, it kept my attention and made me think about how laughter is applied to my life.

The last event of the night was the sophomore play. Their play was about a European Princess who wants to go to college in the United States and finds Hope College!…but not before she goes to the Imperial Ball with the President of the United States in attendance! There were a lot of funny scenes in their play and it was a great ending to the Nykerk tradition!

After all these fun events, the Even Year freshmen took the Nykerk Cup! Everyone did a great job, and even though this was my first year participating in Nykerk, it was the best experience I could ask for! I would recommend that every freshman and sophomore at Hope get involved in Nykerk because it is a wonderful experience.

Until next time, readers! Hope you enjoyed your weekend!

Hi there! I'm a Hope Senior from Sterling Heights, Michigan (about 45 minutes North of Detroit). I'm an English major with a Creative Writing emphasis (fitting), and have a Business minor. I'm super active in Hope life. I am a Student Ambassador, the Senior Treasurer on the Executive Board of Nykerk, and was involved in Orientation as an AD. I also work on campus at the Career Development Center as a Career Advisor, and at Hope's Physical Plant. I love playing any kind of sport (soccer's my favorite!), have a weakness for shoes, eat dessert twice a day, read like its my job, am currently watching Gilmore Girls on Netflix, and have a passion for Golden Retrievers. Contact me at mikaila.bisson@hope.edu because I'd love to hear from any and everyone. Also feel free to follow my super trendy Instagram account at @miktroubleee or my equally as trendy, even more Hope-filled Twitter account at @hopemikaila17 . View more posts