To all my mom’s Facebook friends (and the prospective students that happen to stumble upon this blog), this one’s for you. Just like the old saying goes, I’m back and better than ever. Well, at least I’m back, it’s up to you to decide if I’m better I guess.

Nonetheless, it’s a wonderful time to be at Hope. September is one of the few months during the school year where we don’t have to worry about snowstorms and subzero temperatures so there’s been a lot of positive energy all around campus these first few weeks. New students still figuring out their way around the grounds, the Pine Grove cluttered with hammocks and Spikeball players, and Van Wylen Library somewhat remorsefully reopening her doors as us college-goers come to the realization that summer fun is over, and it’s time to get back to the grind. What a time to be alive.

The bottom line is that it’s good to be back. Last year, as many freshmen do, I spent a lot of time missing home. College is great, but like anything else, it doesn’t mean there aren’t some tough moments along the way. Despite the homesickness, my longing for home-cooked meals, and the straight-up thought of, “What the heck am I doing in Holland, Michigan?” that last year brought about, I missed Hope College during my summer spent in Pittsburgh… a lot. I don’t know where the specific point is that home starts to feel a little less like home, and college starts to feel a little more like where one belongs, but, wherever that point may be, I’m glad I’ve met it. To keep things simple, we’ll just call that enlightenment of sorts, “Sophomore Year.”

So here’s to year two. That being said, whether you’re at year 1, 2, 3, or 15 years removed from college, look at this season as an opportunity to start fresh. Whether it’s in the classroom, on the job, on the field, in a relationship… whatever that looks like for you, everyday is a new day; another opportunity to get after life and do something awesome. Even though it doesn’t always go as planned, (coming from the kid who slipped in the locker room and missed the first week of the soccer season due to a concussion), my encouragement this time around is to keep on, keepin’ on.  After all, a guy much, much, much wiser than me once said, “Behold, I am making all things new.”

Just for kicks, here’s the 2016 Hope soccer team, come catch a game if you’re ever around Holland. 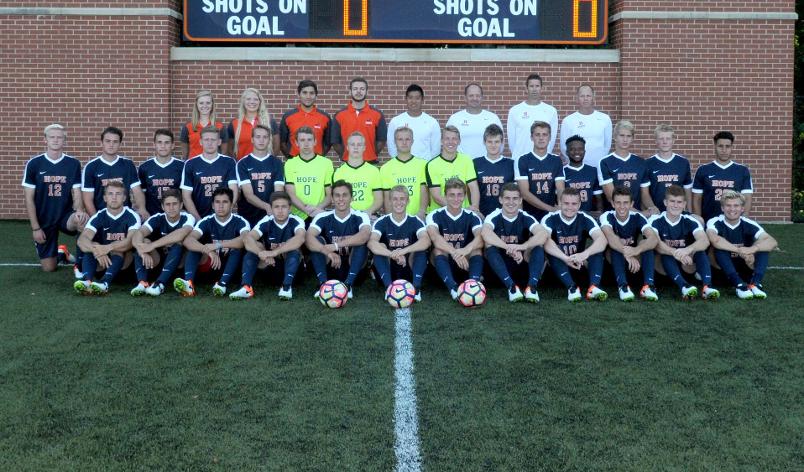 I’m sure I’ll have plenty of stories to tell this year, so until next time…