Well, guys, I made it to Chi-Town and let me tell you, it has already been so much fun! I feel like I don’t have much credibility after only a week, but I truly cannot say enough wonderful things about the Chicago Semester. My first week has totally been a whirlwind, but I’ll give you guys a few highlights!

So, like any program, the Chicago Semester had it’s fair share of orientation events. But unlike the occasionally awkward orientation of freshman year, the Chicago Semester really went out of its way to plan super fun and unique events for us to get to know one another. That being said, we did play one ice breaker. It sort of had to be done. Throughout my orientation weekend I not only got to know my 30+ classmates, but also got to know the city! Part of our orientation process was to divvy up into small groups, where we were each assigned a staff member to show us a unique neighborhood of Chicago. My neighborhood was Little India, where we got to eat a traditional Indian meal, get henna tattoos, and explore some of the local shops selling sari’s. I even got to try one on! 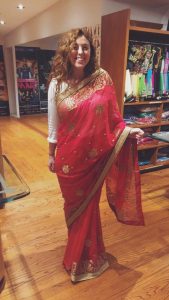 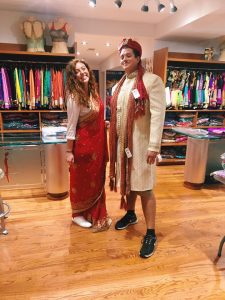 So this past week I started my internship at the Magnificent Mile Association. This semester my job will mainly consist of planning the big lights festival parade that happens at the end of November, and I am already so excited about it! My first day was mostly spent reading and learning more about the association itself, but I can already tell it’s going to be a great environment to work in. My supervisor and the other employees I’ll be working closely with are all young and super inclusive of both my and my fellow interns which is really nice. The only real downfall of the job is that I work right on Michigan Ave. – a.k.a. shopping center – of Chicago. It’s definitely going to be a test of my will power to not walk through the 3-story Forever 21 every day after work, but hopefully I’ll be able to make it!

Since orientation usually finished by 1 p.m., it gave me and my classmates quite a bit of time to explore. So over the course of one week I’ve: gone to a game at Wrigley Field, watched fireworks off of Navy Pier, laid out at the beach, and got brunch at a few local restaurants near our apartment! The city has so much to offer and I can’t wait to keep exploring and pack as much as I can into this semester!