In addition to the panels on the first floor of Van Wylen, several rare books from Van Wylen and Beardslee Library’s collections are on display as part of the month-long Manifold Greatness exhibit. Among these books are four interesting Bibles published during the fifteenth and sixteenth century.

On loan from Beardslee Library of Western Theological Seminary, this 1479 Vulgate is one of the earliest in a series of “Fontibus Ex Graecis,” which are corrected Bibles in Latin that claim superiority over others. The Vulgate was translated into Latin by St. Jerome in the 4th century from Hebrew and Greek.

This New Testament, acquired by Hope in 1888, is the second part of the fourth edition of Erasmus’s translation of the New Testament and contains his annotations explaining his translations. Erasmus’s New Testament translation played a significant role in the history of Bible translation, challenging the Vulgate and being used by Martin Luther and Tyndale in their work to translate the Bible into German and English, respectively. 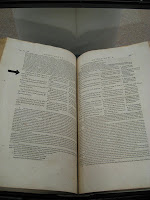 This New Testament was the work of Beza and contains three side-by-side versions of the Bible. The left column contains the New Testament in Greek as edited by Beza, the middle column is Beza’s Latin translation of the New Testament, and the third column is a reprinting of the Vulgate. Beza also printed commentary below the Biblical text. This Bible was used by King James translators and Geneva Bible editors. 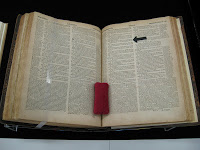 The Geneva Bible had significant influence in creating the political and religious climate conducive to the translation of the King James Version of the Bible. This was the primary Bible of the 16th century Protestant movement and contained many marginal notes added by Reformers such as John Calvin and John Knox. It was the first Bible to use chapters and numbered verses. This particular edition of the Geneva Bible is sometimes called the “Breeches Bible” because of its translation of Genesis 3:7, which says that Adam and Eve sewed fig leaves together “and made themselves breeches.”

These Bibles and several other rare documents are on display on the north end of the first floor. Feel free to look around anytime during normal library hours or during spring break hours from March 15 to March 25.