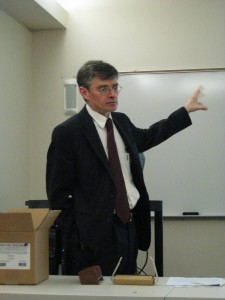 On March 8, as part of the month-long Manifold Greatness exhibit and lecture series, Dr. Pablo Alvarez, Outreach Librarian and Curator at the Special Collections Library at the University of Michigan, came to Van Wylen to discuss the process involved in the printing of the King James Bible that contributed to errors in the first editions. Printing errors were an expected part of early printed books and a source of scholarly interest today.

Printing shops in the sixteenth and seventeenth centuries had a variety of workers, including young apprentices, compositors and correctors. While the compositors arranged the movable type to create words and sentences for printing, apprentices placed the individual blocks of type back into their appropriate cases. Similarities between the appearance of letters, such as “u” and “n,” often led to misplaced letters, which in turn created misspellings such as “aud” instead of “and.” Less stable spelling at the time also led to differences between printings. In addition to spelling errors, there were other misprints, such as that which is found in different version of Ruth 3:15, one of which reads, “She went into the city” while another reads, “He went into the city;” they were sometimes rooted in literal translations of the original Hebrew. Some of the later editions were printed quickly, which increased errors. In total, 387 errors appear in the first edition of the King James Bible.

The next Manifold Greatness program will occur in conjunction with the World Christian Lecture Series sponsored by Campus Minstries, when Makoto Fujimura will discuss his illustrations of the four gospels. The lecture will take place in Winants Auditorium at 4 p.m. on March 12.