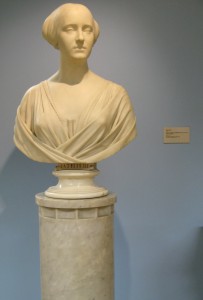 Van Wylen Library users have probably noticed the marble bust directly to the left of the main entrance of the library. This exquisite piece of art depicts Laetitia Mathilde Frédérique Aloissia Elizabeth Bonaparte, the niece of Napoleon, though around the library she just goes by Mathilde. Hiram Powers, an American sculptor from Vermont, formed the bust in Florence, Italy in 1846 out of Italian marble. How did this bust, made 20 years before Hope College was chartered, arrive at Van Wylen?

Powers received the commission for the sculpture of Mathilde in 1845 from her husband, Anatole Nicolaevitch Demidoff. Though the two had separated by the time the bust was completed, Demidoff kept it, and it descended through his family for three generations. In 1969, the bust was auctioned off through Sotheby’s, an international art auction company. At this sale, Richard Wunder came to own Mathilde.

Richard Wunder was an art scholar who was particularly interested in Hiram Powers, the sculptor of Mathilde. In the mid-1960s, Wunder served as a guest curator at the University of Michigan. It was there that he met John Dryfhout, a 1964 Hope alum who was doing graduate work at the University of Michigan. As their professional paths crossed in later years, the two became friends. In the 1980s, Wunder expressed concern to Dryfhout about what would happen to his personal library, which he had placed in storage after moving from a house to an apartment. Dryfhout suggested he donate his materials to Hope. Wunder donated several thousand of his books to Hope beginning in 1984. Hope also received many more materials in 2002 after Wunder’s death. In all, Wunder left 15,000 books to Hope, in addition to clothing, furniture, and Mathilde.

Van Wylen has both volumes of Hiram Powers: Vermont Sculptor 1805-1873, the biography Wunder wrote about Powers. Van Wylen also has all of the research materials Wunder used to write this biography, including letters, receipts, and many other archival resources. Several other books written by Wunder are also in the library’s collection.