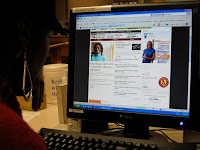 Journalism and newspapers have been called the “fourth branch of the government” by some because of their importance to self-government. In reporting on decisions made by government leaders both at state and national levels, the press allows citizens to make informed choices regarding those in office, a necessary aspect of democracy. However, with the rise of the Internet and decline of the newspaper, some are concerned that effective democracy will no longer be possible. Though much news is available online, not all news, such as CNN’s iReport, is fact-checked before publication like newspapers are. Additionally, many political or news websites tend to be highly partisan, which can lead to problems, especially if readers only visit and read sites with which they agree.

Keeping up with current events is an essential part to being an informed citizen. Van Wylen Library has access to dozens of newspapers, both in their electronic and print forms. The newspaper section of the library’s website has links to international newspapers websites from Europe, Latin America, Africa, and Asia, including Die Tageszeitung from Germany, El Tiempo from Colombia, Independent Online from South Africa, the St. Petersburg Times from Russia, and several other international sources. The library also has links to national papers, ranging from the Los Angeles Times to the Washington Post. Local papers such as the Grand Rapids Press and Holland Sentinel are also linked.

If you need to access older news articles, the library has several resources available. Lexis Nexis allows you to search U.S. and world newspapers, news wire services, blogs, TV and radio transcripts, and web publications for articles from the 1980s to the present. Articles from as far back as 1849 are available from the Chicago Tribune; Hope has the Times of London from 1785-1985, and the New York Times can be found either from Proquest (1851 to three years ago) or from Gale (1995 to the present). In addition, the library has select older runs of several newspapers in microform. 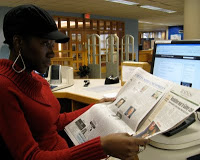 If you prefer to read a print copy of a newspaper, Van Wylen has many available. On the north side of the first floor, you can find print copies of The Anchor, the Chronicle of Higher Education, the Detroit Free Press, the Grand Rapids Press, the Grand Rapids Times, The Guardian, the Holland Sentinel, the Jerusalem Post, Le Monde, the New York Times, the Wall Street Journal, and the Village Voice. Past print issues of these newspapers are also available on the shelves directly behind the rack where current issues are kept. Feel free to pick up an issue and catch up on what is happening in the world around you!
— Bethany Stripp, Library Student Blogger