Claiming Our Education: Reflections on “Speaking Truth to Power” with Austin Channing Brown

“Student Feature” is our newest addition to the WGS blog. Student-scholars enrolled in WGS courses have consented to share their experiences inside and outside the classroom with the Hope community. Today, three students share their insights from Austin Channing Brown’s February 27 lecture, “Speaking Truth to Power.”

What was “Speaking Truth to Power”?

On Wednesday, February 27, 2019, we went to the Black History Month lecture titled “Speaking Truth to Power” by Austin Channing Brown. The event was held in Jack Miller Music Hall and it was packed full of people. Before Brown spoke, there was a song sang by a fellow student from the Black Student Union accompanied by a piano player. After 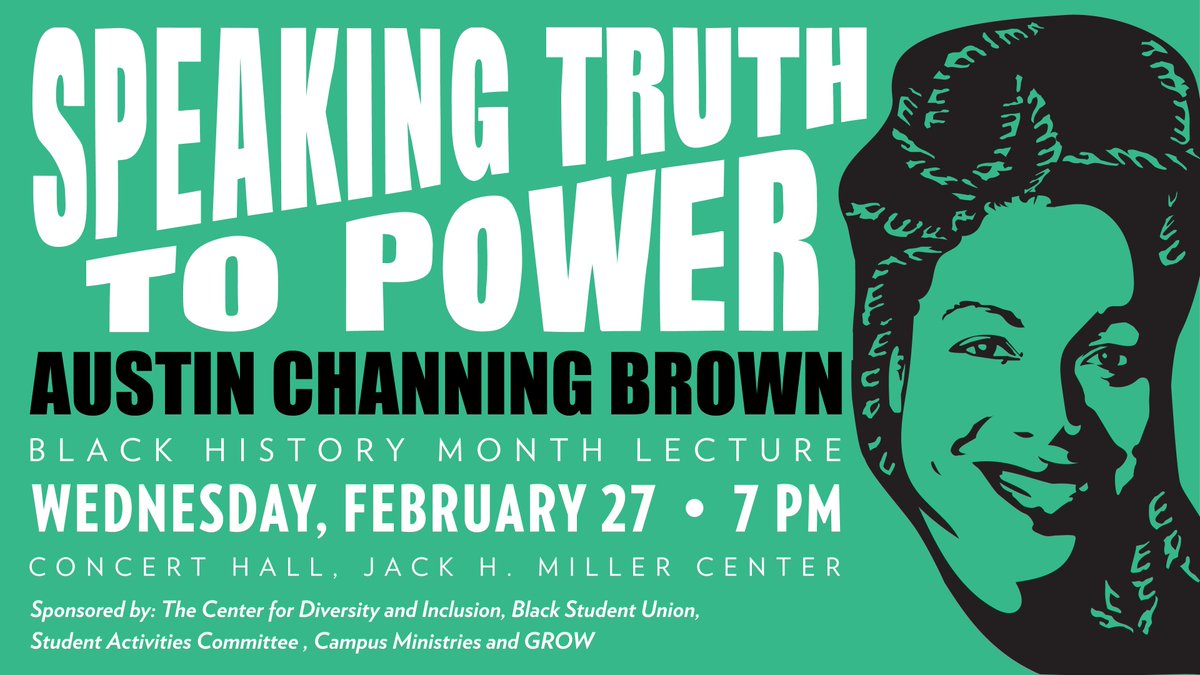 that, there was a speech by a student from the Student Activities Committee. Then, Austin Channing Brown started her lecture which included stories and life-experiences from her book I’m Still Here: Black Dignity in a World Made for Whiteness (2018). She talked about her life experience as a black woman in America and divided the rest of the lecture into three points- a world made for whiteness, black dignity, and the answer to the question “what is a white person supposed to do now?” The lecture was very lively and engaging because she did not want the lecture to become too formal and she wanted people to engage with her. Austin Channing Brown had a thought-provoking and action-provoking lecture on what it means to be Black in a world made for whiteness.

Brown’s keynote shed light on the instances of racial discrimination and bias that still take place not only on Hope’s campus but in our whole country. Through her empowering words and personal story, she brought about meaningful conversations on campus and enlightened the audience about how to bring about real change for our community.

“The whole event was amazing. I can’t begin to fully grasp every point that Brown discussed in her speech, because it was so mind-boggling to be confronted with those issues and concepts . . . Like most white people who don’t know how it is to be oppressed based on the color of our skin, I cannot begin to understand how to reverse all of the pain that Black people and other people of color have experienced because of the white supremacy that is built into our society. I do agree with Brown when she said that ‘every single Black person is created with inherent dignity’ and that we need to stand in solidarity with one another to fight against oppression. Lastly, I fully support Brown in her belief that in order to make a change we need to use the advantage of our own privilege and show up for racial justice.”

“Having grown up in a predominantly white environment my whole life, I had never really given much consideration to the ways that racial discrimination is evident in my life, I also ways knew that it was wrong, and I knew that it happened, but I considered myself and the people around me to be acceptations to the brainwashing that takes place in white communities. Hearing Brown speak about both the small and big ways that race has played a part in her daily life really struck me for numerous reasons. First, it made me think about how being an ally to people of color is not about how me. It is about standing up for those that are not me, those that do not always have the same socially constructed privileges I have and getting out of the way when there are things that I do not need to speak to. I am not meant to be a savior of people of color, but instead someone that can be trusted to listen and hear what people of color have to say and working with them to ensure they are being heard. Secondly, it empowered me to reconsider how I treat people based on factors that they cannot necessarily control. The overarching theme of this speech for me was not only about racial matters, but the way we treat each other in general.”

“One of the main ideas I learned from this event is the world is made for whiteness. I am privileged because I am white, and I don’t have to think about certain things that people of color do. The world welcomes us because we are white and makes room for us. Another idea I learned from this event is black dignity. Brown states there are two lies: white people are superior and colored people are inferior. The first lie is talked about a lot but the second one is never brought up. We need to discuss the second lie more. Also, Brown discussed the lie that hip hop music is seen as inherently bad because of its involvement with blackness. People constantly disregard Hip Hop without even listening to it. Further, I learned Brown’s answer to the question ‘what is a white person supposed to do now?’ Brown any answer she could give is too short and too easy. She said we should use the power that we have to change the college and curriculum to be more inclusive.”

Connecting the Dots: From the Text to the Stage—and Back

When considering how this topic fits with our readings I was reminded of Andrew David Thaler’s article; Thaler speaks to the nature of being an ally:  “Being an ally is not something you are, it’s something you do. ‘Ally’ is not an identity, it is a set of behaviors that help acknowledge and promote underprivileged members of your community.” This definition strikes a chord for me as I consider how to better understand being a meaningful member of a community that is striving for diversity and inclusion in many ways. Remembering that being an ally is so much more about how you act than how you present yourself to want to act is such an important distinction.

Another reading that connects to Brown’s speech is Peggy McIntosh’s “White Privilege: Unpacking the Invisible Knapsack.” McIntosh lists forty-six things that are privileges for her as a white woman. After listing these she states, “For me, white privilege has turned out to be an elusive and fugitive subject… the appearance of being a good citizen rather than a trouble maker comes in large part from having all sorts of doors open automatically because of my color. Her acknowledgment of the privilege that she has is something that I find particularly admirable considering the topics that Brown addressed. Simple things that I all too often do not recognize as advantages can continue to add up to make a world that is not conducive to those that are different from the depiction of normality that we are fed, both as white people and people of color.

Thaler, Andrew David. “On Being an Ally and Being Called Out for Your Privilege.” Weblog. Southern Fried Science, 19 November 2013.