Claiming Our Education: She Bites Back

“Student Feature” is our newest addition to the WGS blog. Student-scholars enrolled in WGS courses have consented to share their experiences inside and outside the classroom with the Hope community. Today, three students share their insights from Dr. Kendra R. Parker’s February 28 lecture, “She Bites Back: Black Women as Predators in Life and Lit.” 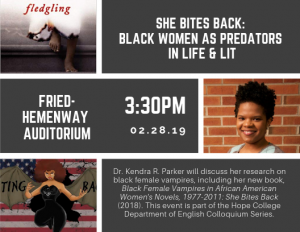 What is “She Bites Back”?

On Thursday, February 28, 2019, we attended “She Bites Back: Black Women as Predators in Life and Lit” where Dr. Kendra R. Parker discussed her research on Black female vampires, including her book, Black Female Vampires in 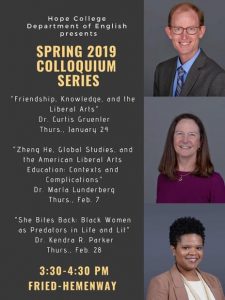 Her research is focused on the identification of “predator” Black women have been given over centuries. She compared the political marginalization that both Black women and vampires have experienced in both reality and fiction and explains the terms “Black women” and “vampire” as interchangeable when considered political threats.

“I learned way more than I thought I was going to. But I am going to highlight a few of the major points of the event. The first highlight was the presentation. Throughout the entire thing, I was shocked to learn what I did about racism and how vampires were used as a vessel in that. The second highlight was when Dr. Parker explained why she wrote the book and how it evolved from her dissertation to what is now a book. The research she put into it was fascinating to hear about. I also really enjoyed listening to why she chose the books she did in her book and her research. The final highlight for me was the question and answer session at the end. Sometimes when you go to presentations, no one in the audience wants to ask a question, but this was very different. The people in the audience were curious; they wanted to know more and even had comments about things that were shown in the presentation. Overall, it was one presentation that I enjoyed. I will definitely remember this information the next time I watch a vampire show/movie.”

“I have learned a lot from this presentation. I was never into reading books, let alone books about vampires. I never looked into the history of vampires and how many Black people were depicted as vampires and as blood-sucking predators throughout history. I had the chance to learn about many different works of literature about vampires, specifically those that include Black women as vampires or things of that sort or characteristics that can be seen as vampires.  I loved learning how Dr. Parker wanted to change the image of women, specifically the image of Black women, and how in Black women’s literature they are not the “typical” bad vampires that people usually envision. It was very interesting learning about the connections that many see between Black people and vampires. I would have never have seen the connection or would have never known that they were depicted that way until coming to this presentation.”

“One thing I learned from Dr. Parker’s lecture was the depiction of Black folks as vampires. Prior to this lecture, I learned about Black people depicted as animals, but vampires were an entirely new category. In simple terms, Black people were considered monsters. The photo titled “The Vampire that Hovers over North Carolina” depicts a Black person (looks more manly) as a vampire terrorizing a village. Since vampires are considered non-human, the “undead,” depicting a Black person meant society considered them as creatures and monsters that needed to be hunted and ‘eliminated.’”

From the Text to the Stage–and Back 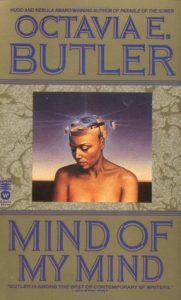 This presentation made us think a lot about Octavia E. Butler’s Mind of My Mind. We know this was one of the books used in the research and presentation and one we read in WGS 200 (Introduction to Women’s and Gender Studies), but we’re thinking more about the systems of oppression that we see throughout the book.

Black people face so much oppression as it is and seeing the ways that they are referred to as bloodsuckers or feeding off things makes it worse. In Mind of My Mind, there is a lot of privilege given to the characters who have telepathic power, and those without are seen as less than–they are even called “Mutes.”