Claiming My Education: “Inclusive Design, Ethical Tech, and All of Us”–An Event Review

“Student Feature” is our newest addition to the WGS blog. Student-scholars enrolled in WGS courses have consented to share their experiences inside and outside the classroom with the Hope community. Today, one student reviews the April 2, 2019 event, “Inclusive Design, Ethical Tech, and All of Us.”

I attended a presentation by speaker and author Sara Wachter-Boettcher entitled “Inclusive Design, Ethical Tech, and All of Us” on April 2, 2019, an event co-sponsored by the Women’s and Gender Studies Program, Computer Science Department, the Dean of Natural and Applied Sciences, and the Mellon Grand Challenges Initiative. 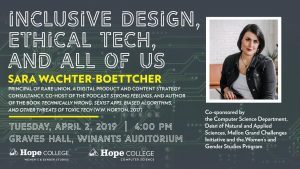 Wachter-Boettcher, author of Technically Wrong, discussed the importance of being aware of the harm done in subtle ways through technology, we use every day. She shed light on the issues caused when the lack of inclusivity permeating the tech industry has direct effects on the community of users it is focusing on.

This presentation was particularly eye-opening to me regarding my own relationship with technology in everyday life. Her specific examples of how different phrasing can have serious effects on the perpetuation of destructive “social norms.” Her example of the cupcake icon used by Google Maps to encourage walking rather than driving was a particularly bizarre example of this kind of perpetuation.

However, what really struck me about that example, besides the reasons listed as to why it was an inconsiderate and destructive new program, was her comment about how much time must have gone into making that kind of a program in the first place. This brings about the primary issue that faces the tech industry today: small choices regarding the details of new programs and applications that can lead to big consequences for their users.

While there is a significant amount of detail and planning that goes into the process of creating these things, the question becomes more about who is suggesting rather than what they are suggesting. Another aspect of this lecture that struck me was the reactions from major tech companies on how they deal with many of these problematic small choices discussed. CEOs of major companies such as Facebook seem to have very little remorse or concern for the areas in which they are neglecting their users. This mentality of quantity of content versus quality is plaguing the whole industry.

One example of how these concepts are brought about in the texts we have read so far has been through Roxane Gay’s discussion of social comparison in the media. Gay has been particularly outspoken about the shortcomings of our society in general towards people who do not fit the “norm” of this culture. When detailing her experiences Gay says, “People prefer the stories of the too-skinny girls who starve themselves and exercise too much…disappearing into plain sight” (Gay, 191).

Gay’s observation emphasizes the importance of an inclusive perspective when considering the implications of an application change, such as the Google Maps mini-cupcake incident. Another connection to texts from this semester comes from Ch. 3 of Jessica Valenti’s book, Full Frontal Feminism. In this chapter, titled “Pop Culture Gone Wild”, we hear from Valenti how she feels about the climate of pop culture in relation to women. She states: “We’re all trapped in the limiting version of sexuality that’s put out there – a sexuality that caters almost exclusively to men” (Valenti, 45).

The reality of the fight for equitable representation, not only for women but for all people, is that it will involve very intentional and well-organized demands to be made of institutions that have endless resources. Being able to combat this trap, as I believe Wachter-Boettcher spoke to in her lecture, is about finding what you want from the tech industry and asking for it directly.