“Student Feature” is our newest addition to the WGS blog. Student-scholars enrolled in WGS courses have consented to share their experiences inside and outside the classroom with the Hope community. April is National Sexual Assault Awareness Month (NSAAM), and this year the Students Teaching and Educating Peers (S.T.E.P) chose the theme  “I Stand With Survivors.”  Thus, it is fitting that our final  Student Feature of the semester comes from one student who is claiming her truth. Makenna Clarke discusses her attendance at author Laurie Halse Anderson’s Grand Rapids book tour and how Anderson’s words, “empower[ed] [her]  to take a step in accepting [her] own truth.” Content Warning: sexual assault.

On March 16, 2019, I attended Laurie Halse Anderson’s Grand Rapids stop of her Shout book tour.  Anderson was my favorite author in my early middle school years, so I was definitely “fangirling” at the opportunity to hear her speak.  The event was run by an interviewer and lasted a little over an hour, while the last 15 minutes were opened up to audience Q&A. Following the discussion, Anderson signed books and took pictures with fans.  Overall, this event was a fantastic experience. 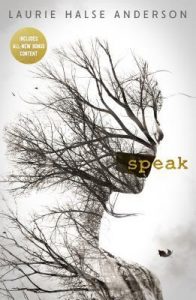 e subject of sexual assault, but in her newest book Shout, Anderson shares her own experience and how it has affected her. She talked a lot about toxic masculinity and how our society needs to more openly talk about sexual assault and support those survivors.

This event was really valuable for me because it helped me to finally come to a realization and accept my truth.  Throughout the event, Laurie continuously mentioned how most instances of sexual violence are perpetrated by someone the victim knows, and not by a random stranger like the media so often portrays.  Because of this, it can often be difficult for the victim to recognize or accept that they were assaulted. As a WGS student and a S.T.E.P. Educator, I had already known this information, but hearing it from Laurie Halse Anderson made it that much more meaningful and real.

In fact, while listening to Anderson, I remembered a time when I said no, but the guy didn’t listen. I remember telling myself that it “didn’t count as assault.”  I am so grateful to  Anderson for using her voice and empowering me to take a step in accepting my own truth. I had the privilege of speaking with Anderson while getting my book signed, and although she didn’t know it, she was the first person I had ever told about the assault.  She then asked to give me a hug and gave me some words of wisdom, which meant so much to me.

As I’m writing this, I’m realizing how much I relate to a quote from Roxane Gay’s Hunger: “I don’t know how to talk about rape and sexual violence when it comes to my own story.  It is easier to say, ‘Something terrible happened’” (38). In the previous paragraph, I found myself wanting to say, “what happened to me” instead of using the word “assault.”  It absolutely baffles me how much power language has, and as someone who works to advocate on behalf of others, I wholeheartedly understand Gay when she says how difficult it is to directly use certain words when acknowledging her own assault.  For a while, I think it might be hard for me to open up to other people about this part of my story, but I’m proud of myself for even coming this far in defining the assault which has helped me to validate my feelings and claim my truth.

If you or someone you know is a victim of sexual assault, please contact Christian Gibson, Hope College’s Victim Advocate and Prevention Educator.